August 7-10, 2020 - From Salt Lake City, Utah
After all the cancellations due to Covid-19, I managed to put together one last tour in early August—the goal was to basically cover the Most Wanted species, with the exception of the desert species typically covered at the beginning of the most wanted tour. For this trip, I picked up a client in SLC then drove north to Twin Falls (backward from my normal route) and met up with the other 2 joining our party for the rest of the tour.

The first task was tracking down Cassia Crossbill, which only took about 10 minutes. We found a few birds moving around the treetops and calling near Diamonfield Jack and with everyone satisfied with the views, we deiced to check a few other areas—but didn’t get any better looks, so we moved on towards Brockman’s Feeding Station. En route we picked up our obligatory Lewis’s Woodpeckers, and also the first Olive-sided Flycatcher we’ve recorded in Idaho on this tour. 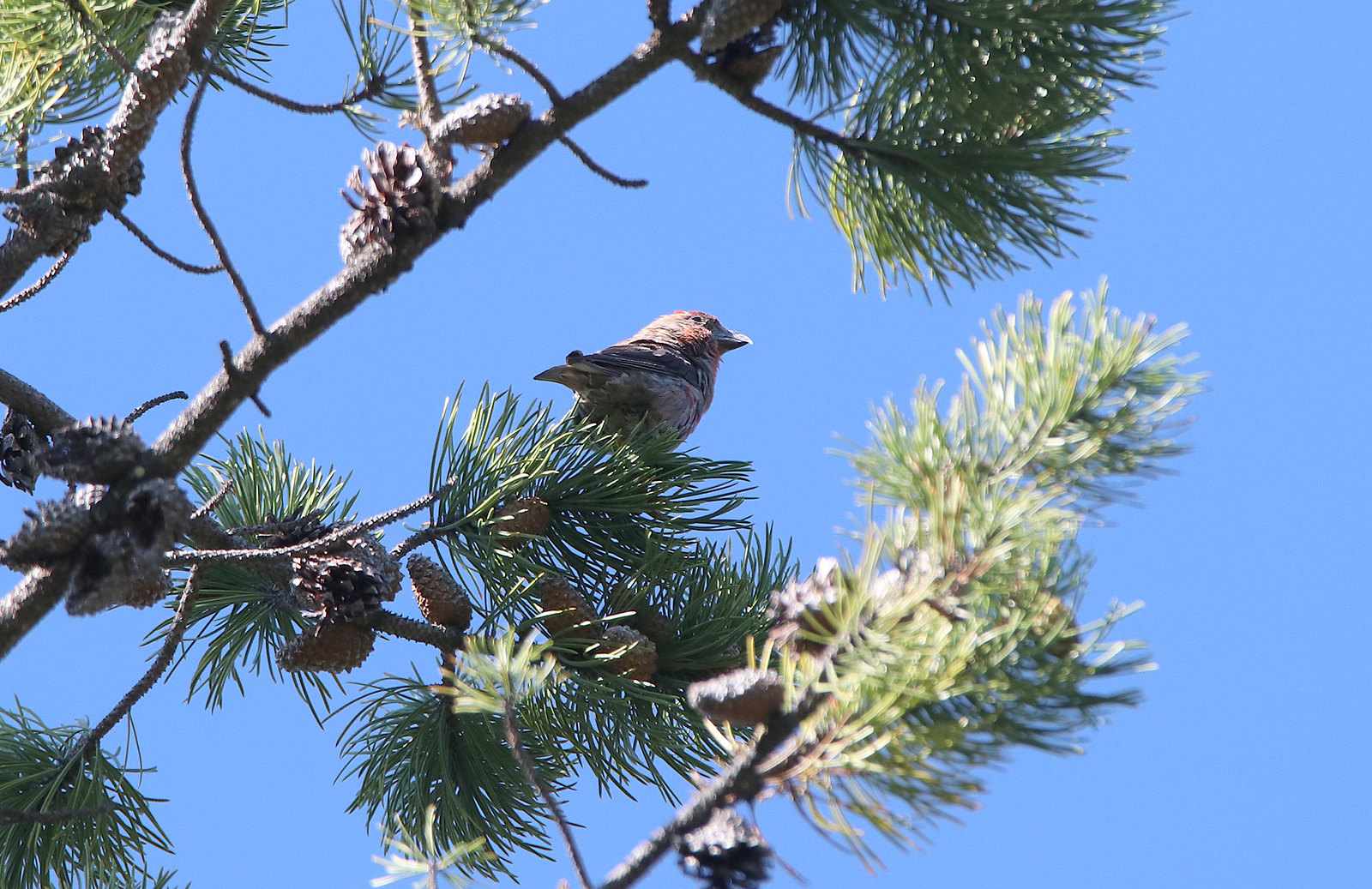 Cassia Crossbill in the treetops
At the feeding station, there were far fewer birds than earlier in the summer, and the Black-chinned Hummingbirds were dominating the action. A good number of Broad-tailed Hummingbirds were in the mix and we had one aggressive Rufous Hummingbird that kept everyone else on guard. Of course, the highlight here was 3 Calliope Hummingbirds—all young/female types, the males appeared to have moved on. 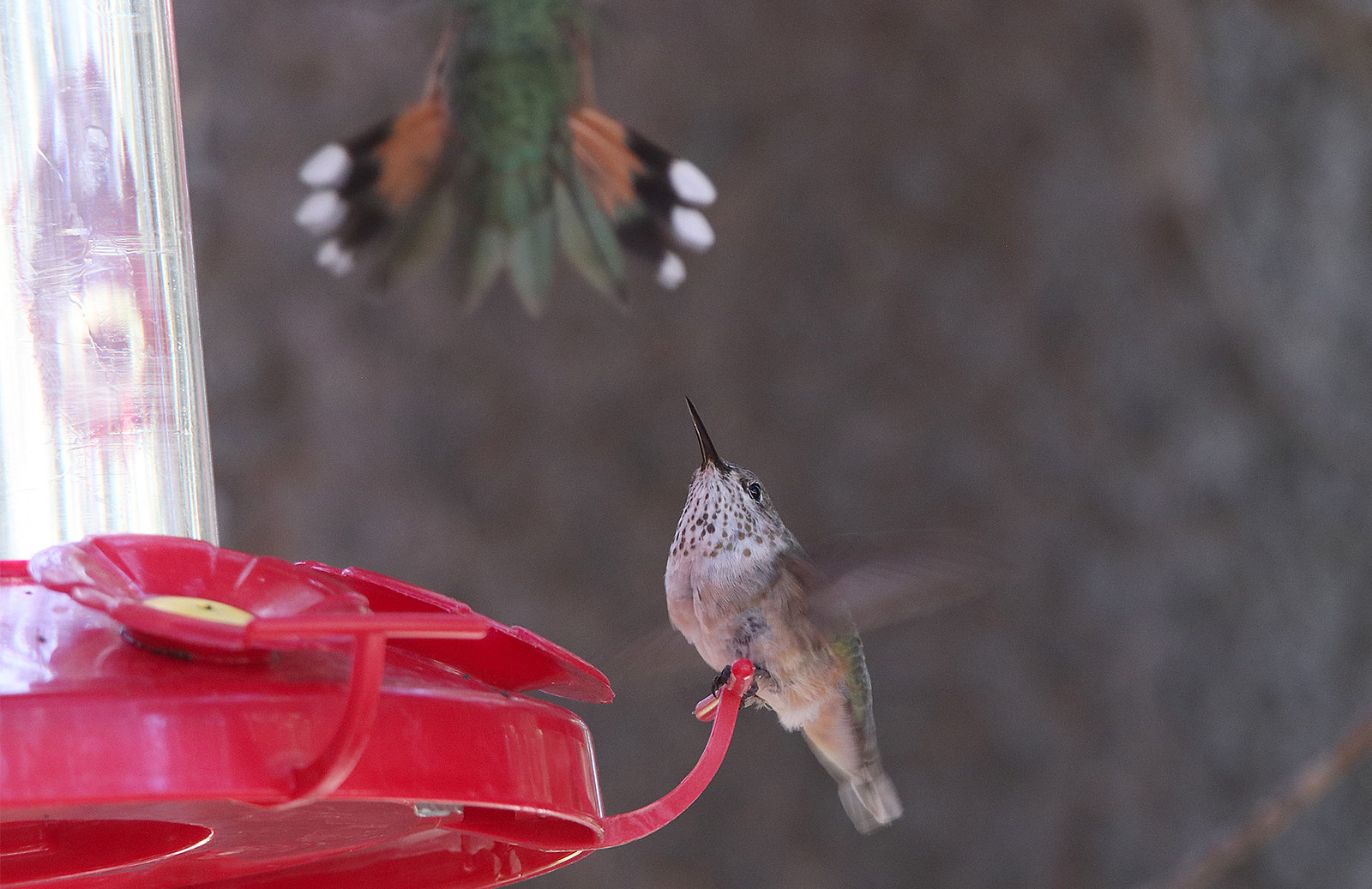 Calliope Hummingbird mobbed by a Rufous Hummingbird
We spent the evening south of town in the agricultural areas, picking up Barn Owl and Burrowing Owl. We were watching a harrier fly over the sagebrush at one stop when a large flock of Gray Partridge took flight--this bird was tough this year on both tours!  Perhaps the most interesting thing was a flyover pluvial plover that sounded like a Black-bellied or possibly Pacific Golden-Plover. Unfortunately, it never stopped and was left as plover spuh!

The next morning we birded along the Snake River where a nice flock of Bushtit provided killer views, while Canyon Wren and Rock Wren both showed nicely as well. A lingering Bullock’s Oriole was a nice surprise. 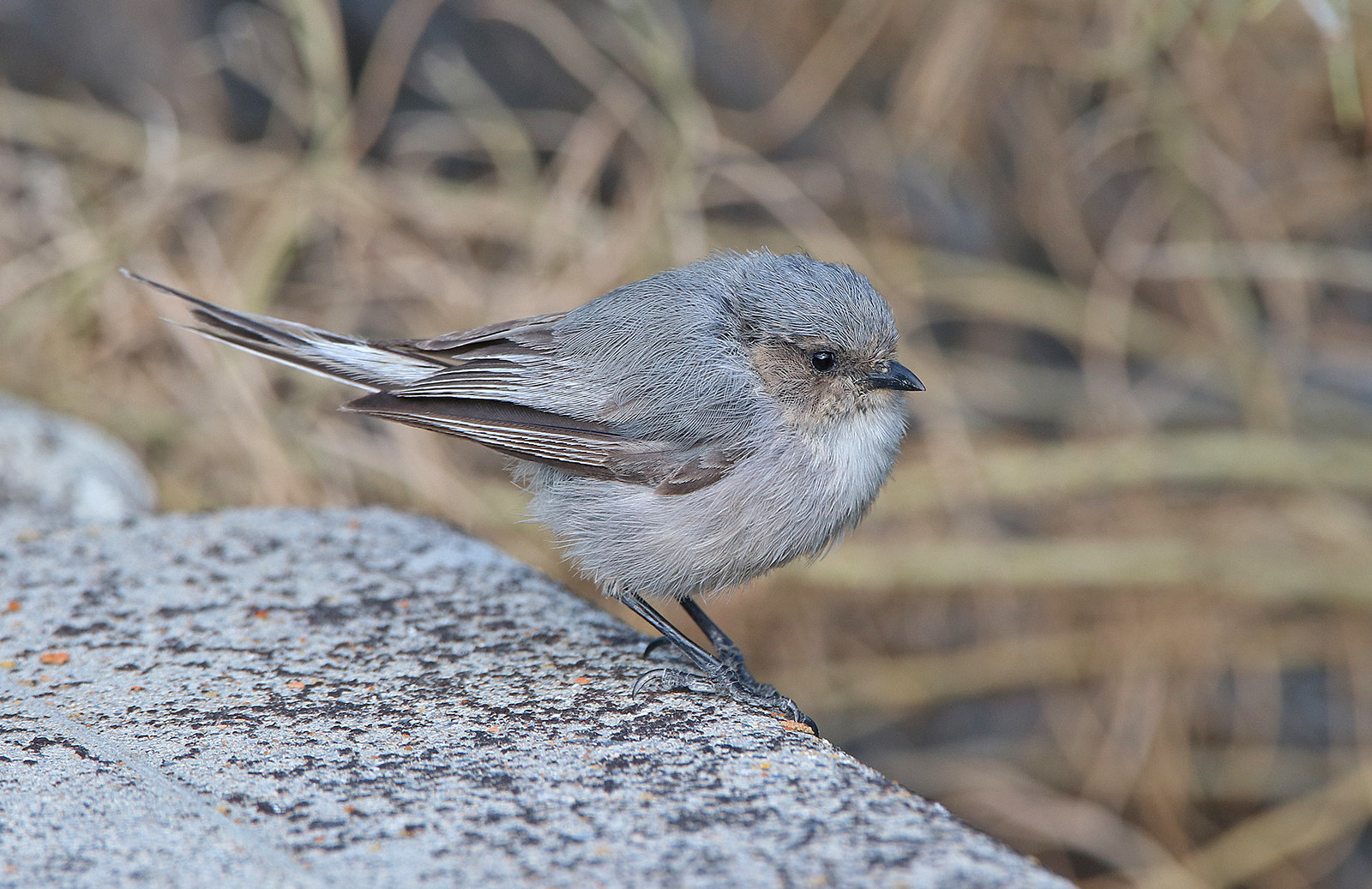 Killer looks at Bushtit
Heading south into Nevada, we stopped in Jackpot to check out the golf course and sewage ponds (very difficult to bird). 45 Killdeer were in a soccer field on the outskirts of town, while a pair of Say’s Phoebe represented a species we tend to miss about 50% of the time. Continuing south towards Elko, we stopped at a reliable Sagebrush Sparrow spot and had 9 birds!!! It was incredible seeing 6 lined up on a fence together. 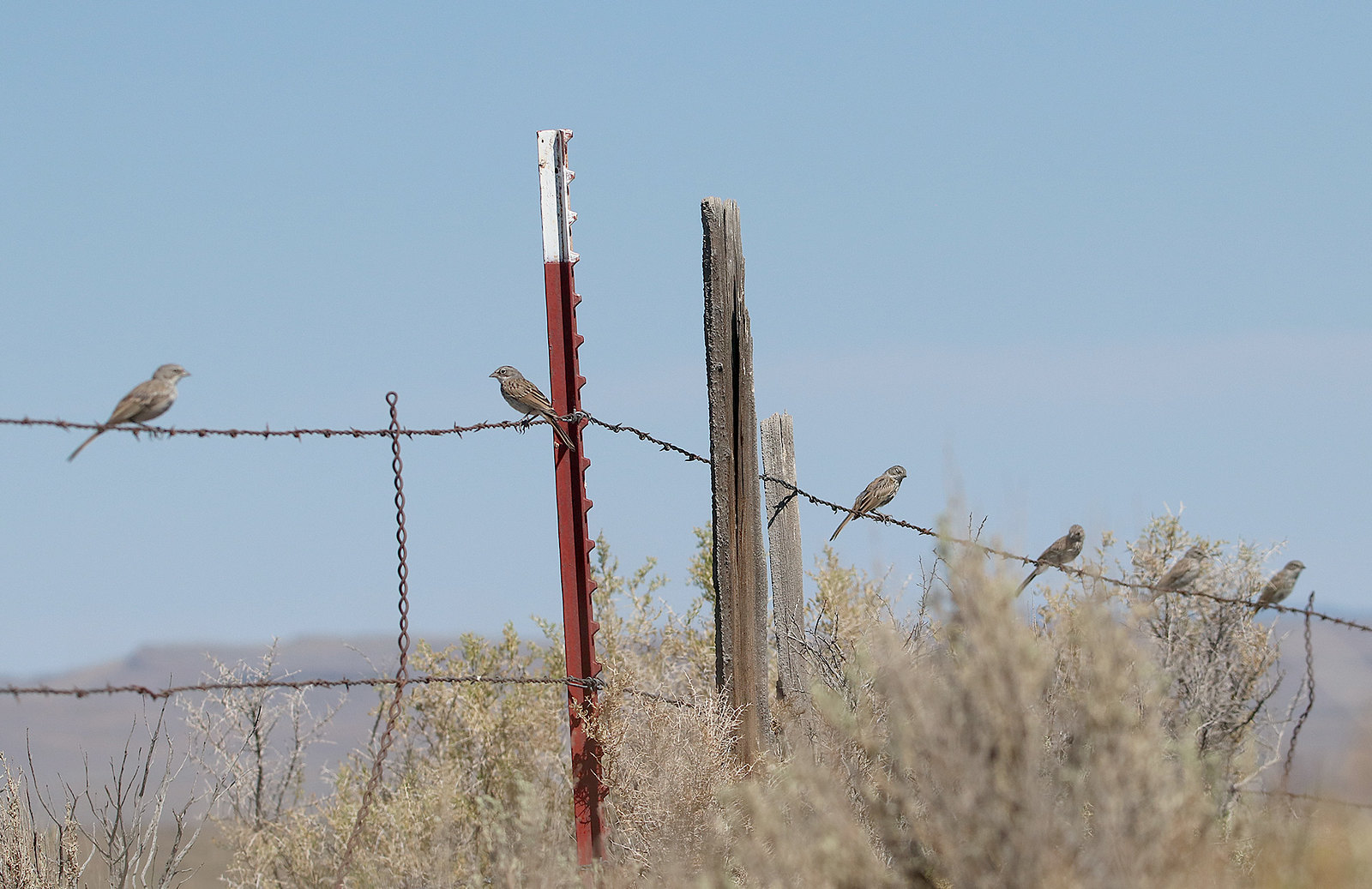 6 Sagebrush Sparrows lined up!
After getting to Elko and settling in we headed off in the later afternoon to bird along the Humboldt River. We had an incredible outing with 38 species, the second-biggest total in eBird from this area. While there was nothing too remarkable, we had a Mallard type that gave us fits as a possible Mexican Duck and in the end, left us with more questions than answers.

We wrapped up the day at South Fork Recreation Area and a nice assortment of shorebirds and the hit or miss resident Bald Eagle. Early to bed, we got up early due to the experience on my previous tour and were at the trailhead at 3:22 AM. Hiking in the dark while serenaded by a Great Horned Owl, I moved at a pretty good pace for a big man. Talking to the group beforehand I told them I wanted to be in place well before sunrise so I would go ahead and get setup. I was at the lake in under an hour and at my viewing spot 20 minutes later still completely dark. Slowly everyone in the group arrived and we watched the sky lighten in the east. 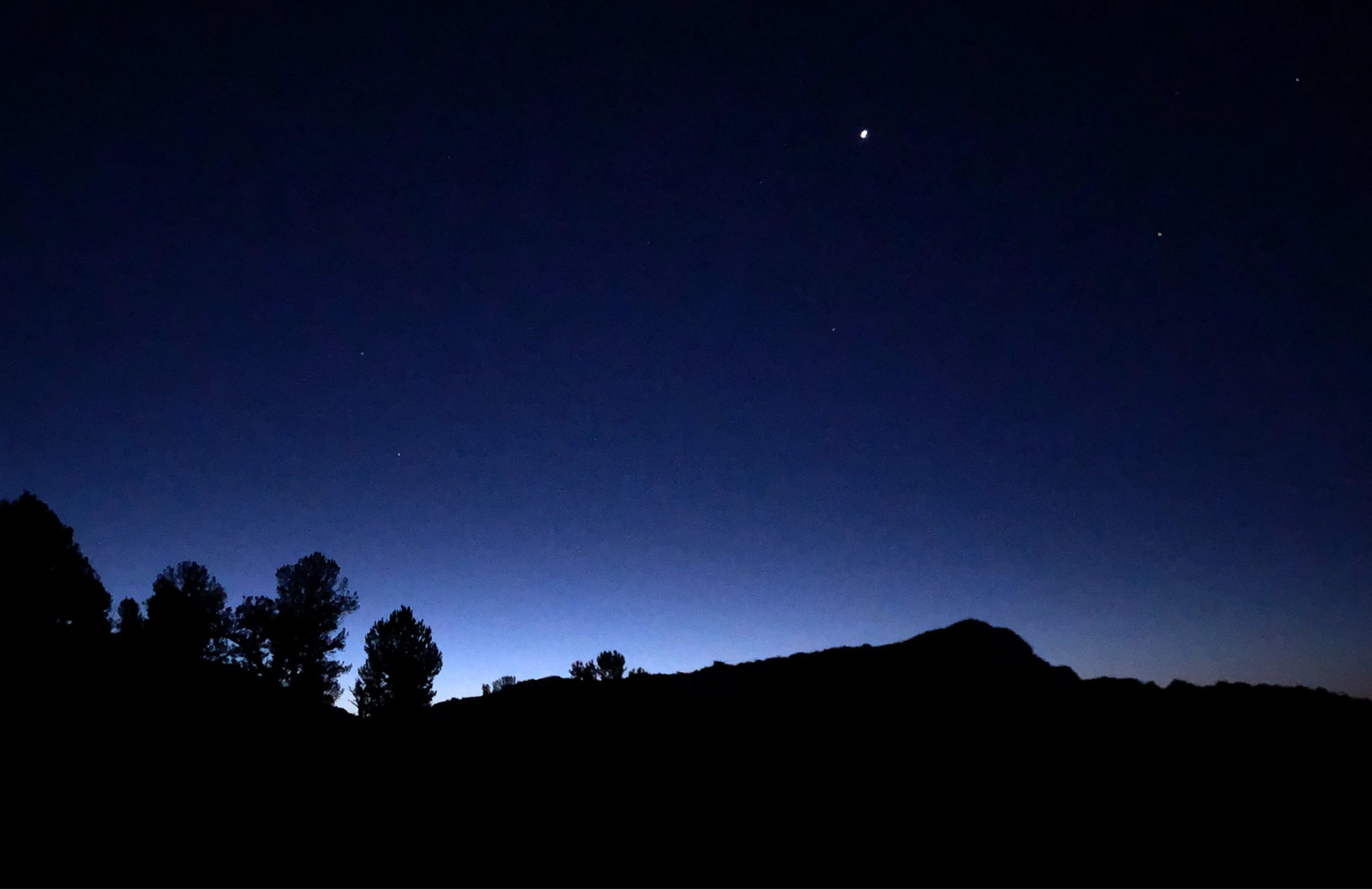 The last little bit of night fading to day...
At 5:20 am the Himalayan Snowcock started calling, and for a painstaking hour and thirty minutes, I scoped my usual locations without seeing anything. The birds had been silent for almost an hour when one called in what seemed like a higher than usual meadow. I moved my scope and worked my way across when I caught the movement—success! For the next hour, we followed a pair of birds that worked their way across a 1/4 mile stretch. It was a huge relief after the short look the week before! 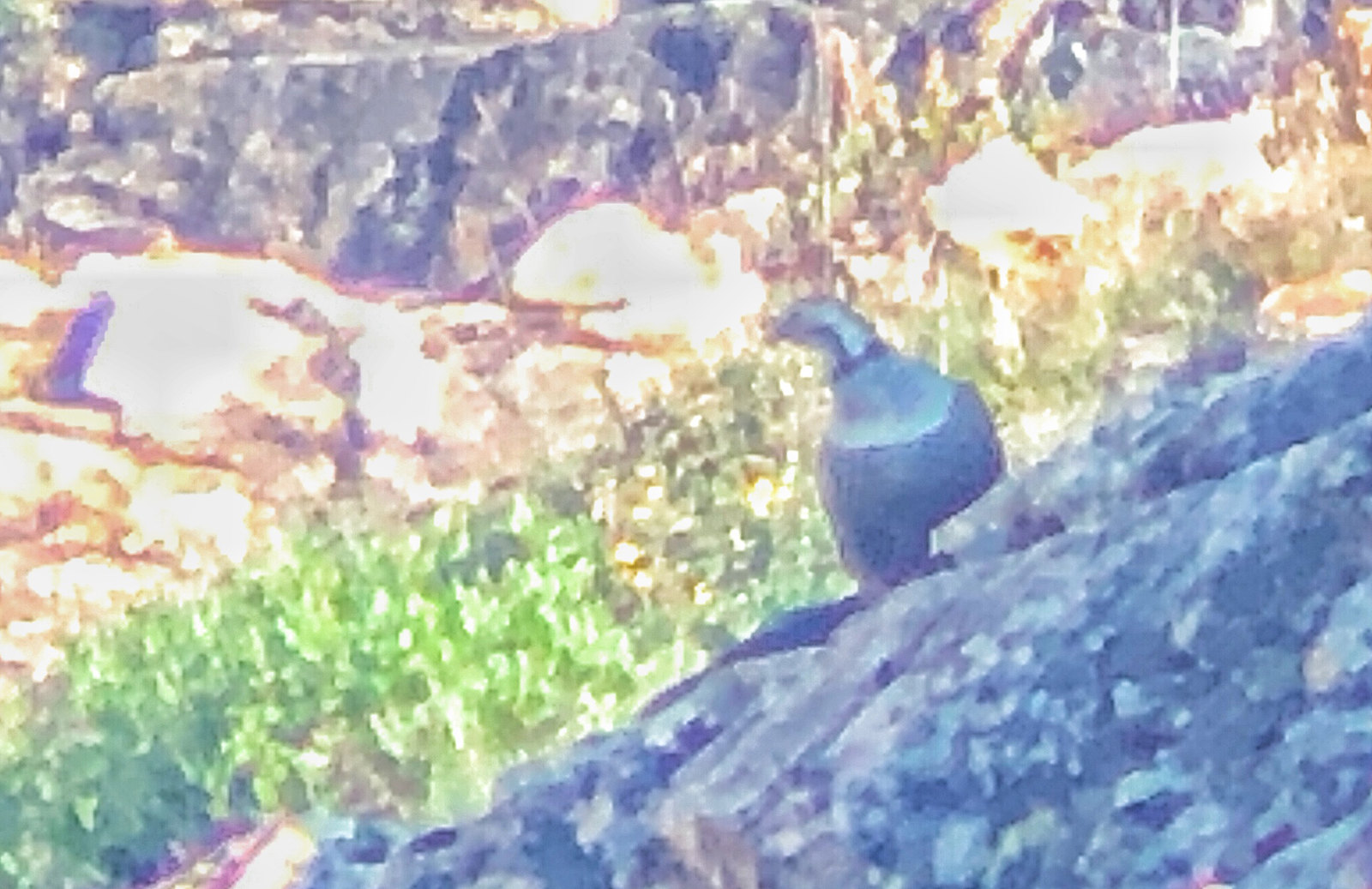 Target achieved--Himalayan Snowcock at 60x...
The other interesting note was we had 15 Black Rosy-Finch today. I remarkable count for this tour! After an uneventful hike down we found another Lewis’s Woodpecker in Lamoille Canyon, before heading back to town. Grabbing lunch and eating in the park a Townsend’s Warbler moved around in the trees over our table—a first for the most wanted tours which generally occur well before migration for this species.

We did the same loop in the evening as the night before with what appears to be a Red-shouldered Hawk flying along the river. We never got great looks and left it as buteo spuh on the checklist. Southfork had a good amount of movement overnight with a lot more shorebirds today. We added Semipalmated Sandpiper and Greater Yellowlegs for the tour.

Our final morning started off without having to re-hike for snowcock—always a nice way to start morning 2 in Elko. We birded the desert around town and counted an incredible 25 Sage Thrashers before starting our journey back towards Salt Lake City. On a whim, we decided to check out an RV resort on the side of the freeway. I called the owners and got permission to bird and we were pleasantly surprised. There were a few migrants around—but still, on the early side, it was mostly breeders. A young Gray Catbird was the best bird—likely a breeder in the area, there are very few confirmed sightings in Elko county away from the Goshutes which get a fair amount of coverage from hawk watchers every year. For me, it was a new Nevada bird. 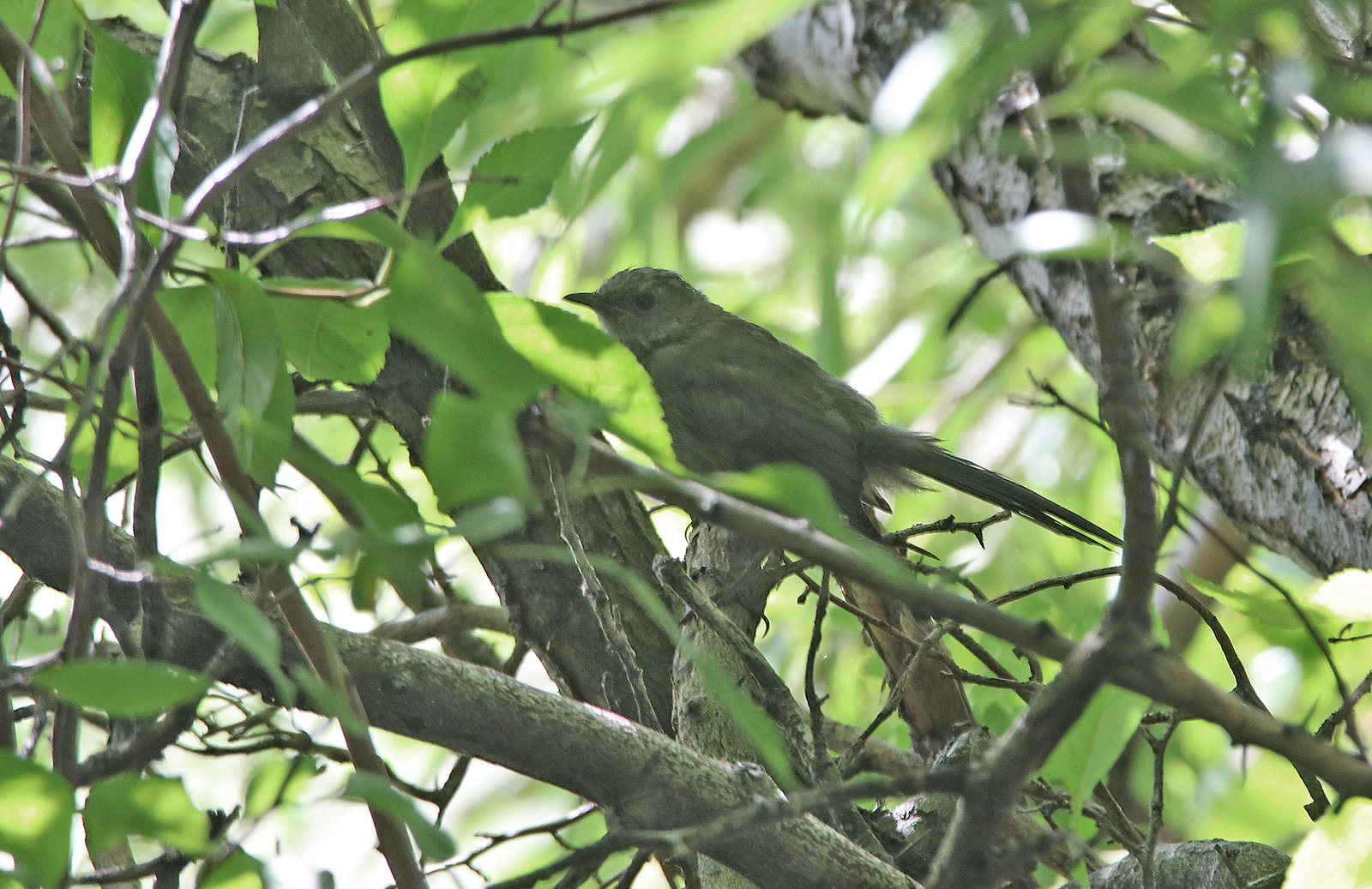 Gray Catbird skulking around the RV resort
For the 2nd week in a row, we had a Nashville Warbler, indicating some good early movement this year. The other bird that was briefly seen was an apparent 1Y Bay/Poll Warbler. We lost it after finding it and were unable to relocate it in the thick willows here. I know I want to bird this location later in the fall in the future—I imagine it could turn up some nice eastern vagrants!

Back in Utah, we picked up Baird’s Sandpiper at a roadside pond before finally snagging a Ferruginous Hawk at the stakeout from the previous week. Working on upping the tour total we birded Lee Kay Ponds in Salt Lake Valley for Neotropic Cormorant before breaking for a bit. In the evening we set off to look for Black Swift. It was a hot day in northern Utah and after it cooled very few swifts were out at our breeding site. We did spot a few White-throated Swift and eventually had 2 swifts that looked good for Black Swift, but were quite high, and I wasn’t comfortable making the call on birds that we couldn’t be sure about.

We wrapped the tour up with the pièce de résistance, and my favorite—the Flammulated Owl. Even weeks after breeding season, we still located 3 Flammy’s, successfully locating the big 3 for the mini most wanted. 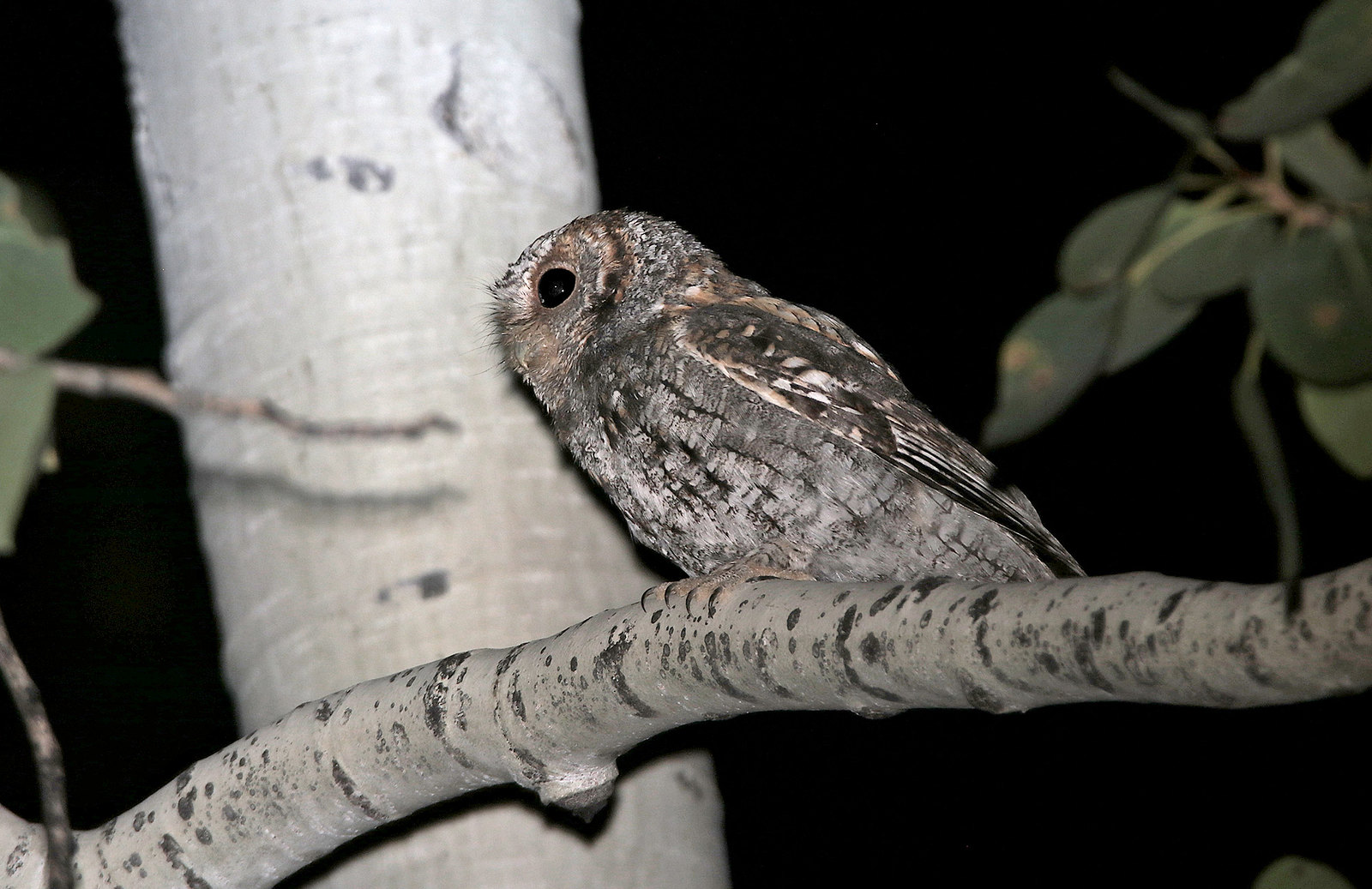 Ending with a bang--Flammulated Owl to warp things up
After what was a really tough summer for the world, the country, the tour industry, and my company I was just happy to be able to lead some tours this year.  I really enjoy the most wanted tours and it was fun to be able to show a few new birds to clients.
We ended up with 135 species for the tour and with the exception of the difficult to get swift we got every other target bird for the tour!
Photos from this tour can be found here:
https://www.flickr.com/photos/mwbirdco/albums/72157717777193547