After 18 months planning, an advanced scouting trip in 2018, and our local guides running a version of our Lesser Sundas Tour with another client in October 2018, we were excited to touch down in Bali for 18 days of birding on the Indonesian Archipelago. As with any long tour, in a remote part of the world, things didn’t always go as planned, but overall things went rather smoothly and the tour was quite successful. 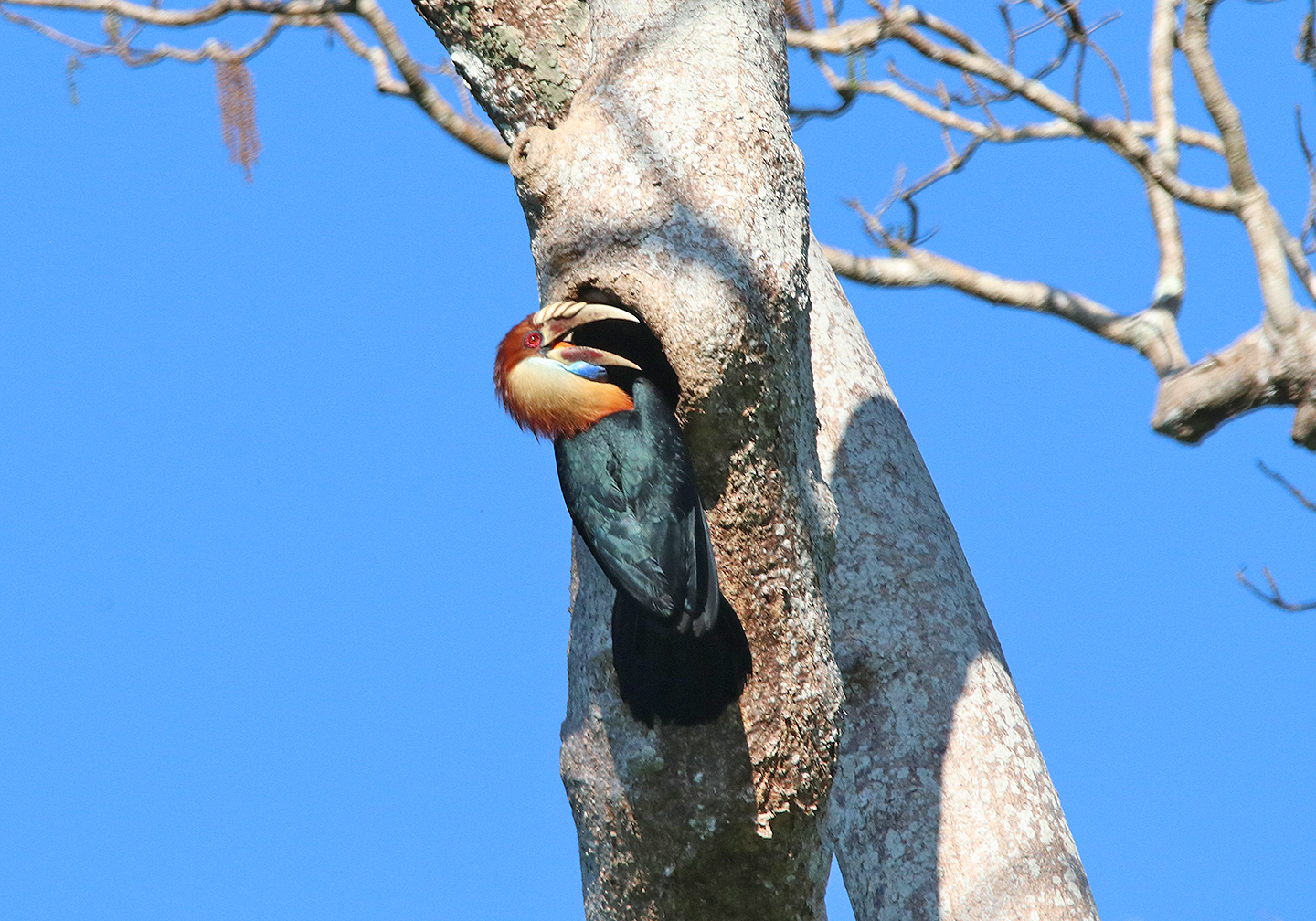 Sumba Hornbill at its nest cavity

During our time in the country, we tallied 292 species of birds on the current Clements list. Additionally, we encountered at least 19 other subspecies and or undescribed forms not currently recognized by Clements that will likely be split at some point in the near future (Rote and Timor Boobook, Mutis Parrotfinch, Timor Nightjar, Timor, Flores, and Sumba Flowerpecker, etc.).

But the juiciest tidbit and the entire reason for going to the Lesser Sundas is for the endemics--and endemic-wise, this tour was a success! On the Lesser Sundas, we tallied 79 Lesser Sunda endemics--the vast majority of the expected 85 species! Add in the 21 Java and Bali endemics found on Bali, we ended up with 100 species of endemics from Nusa Tenggara! We tallied a whopping 140 Indonesian endemic or near-endemic species in all, meaning that 48% off all the birds we saw are only found in Indonesia!

On Sumba, we found all 17 possible endemics, with good looks at 16 (see flighty Sumba Buttonquail below), and were only on the island for roughly 48 hours--a pretty good turnaround. A Sumba Hornbill feeding its mate in a nest cavity, a female Eclectus Parrot guarding her nest, a pair of cooperative Sumba Boobook, and a very obliging Red-naped Fruit-Dove highlighted our day at Billa Forest on the island. While a last-ditch effort for Sumba Myzomela paid off, and a flighty Sumba Buttonquail punctuated the quick stop here. 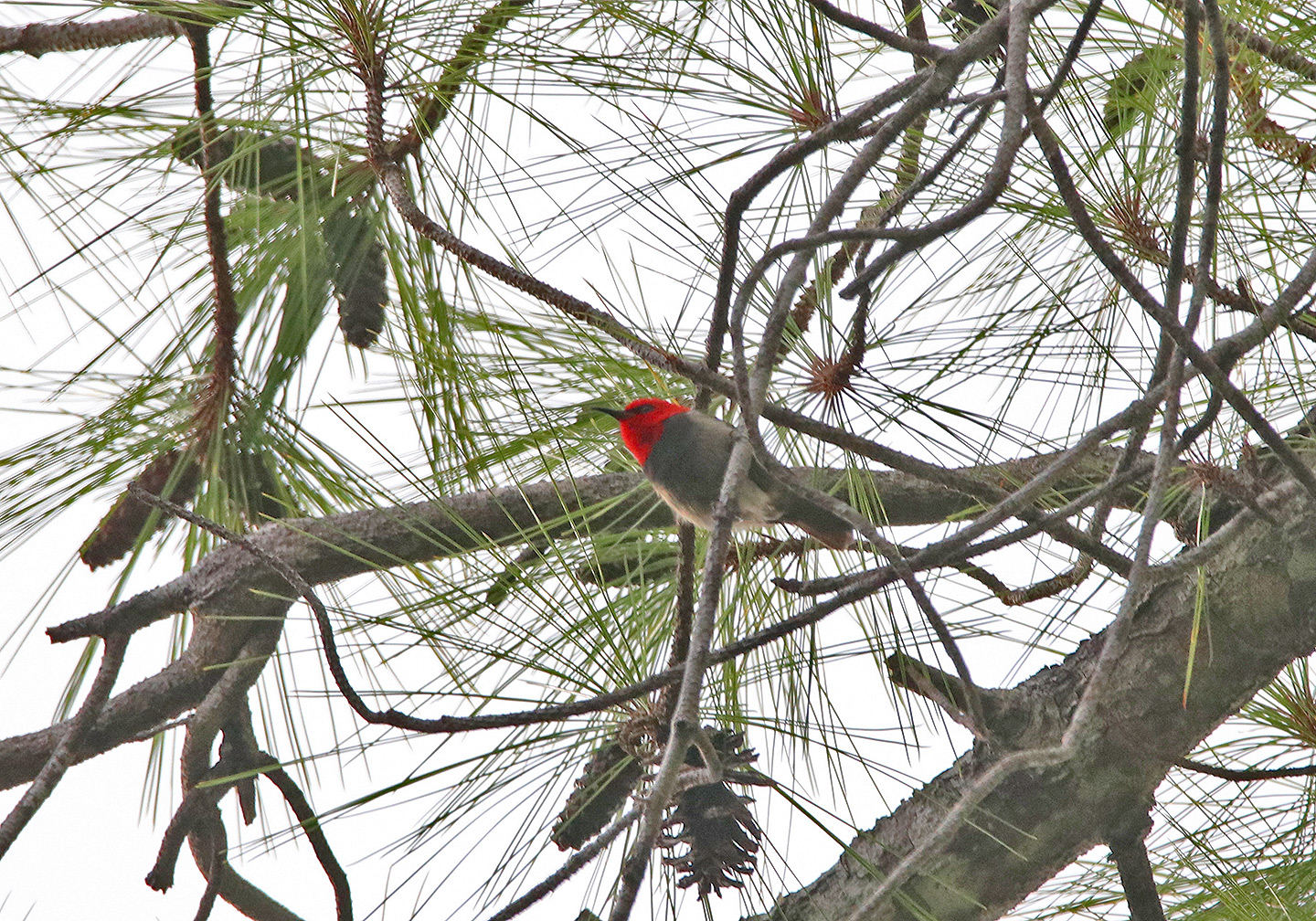 Sumba Myzomela at the 11th hour

On Rote, we found all 4 recognized island endemics with ease: Rote Boobook, Rote Myzomela, Rote Fantail, and Rote Leaf Warbler. Additionally, we located both the Timor Blue Flycatcher and Timor Stubtail which potentially may be recognized as distinct species in the future (among a number of other possible splits. We also had great looks at a number of Timor specialists here like Timor Oriole, Red-chested Flowerpecker, and Green Figbird. 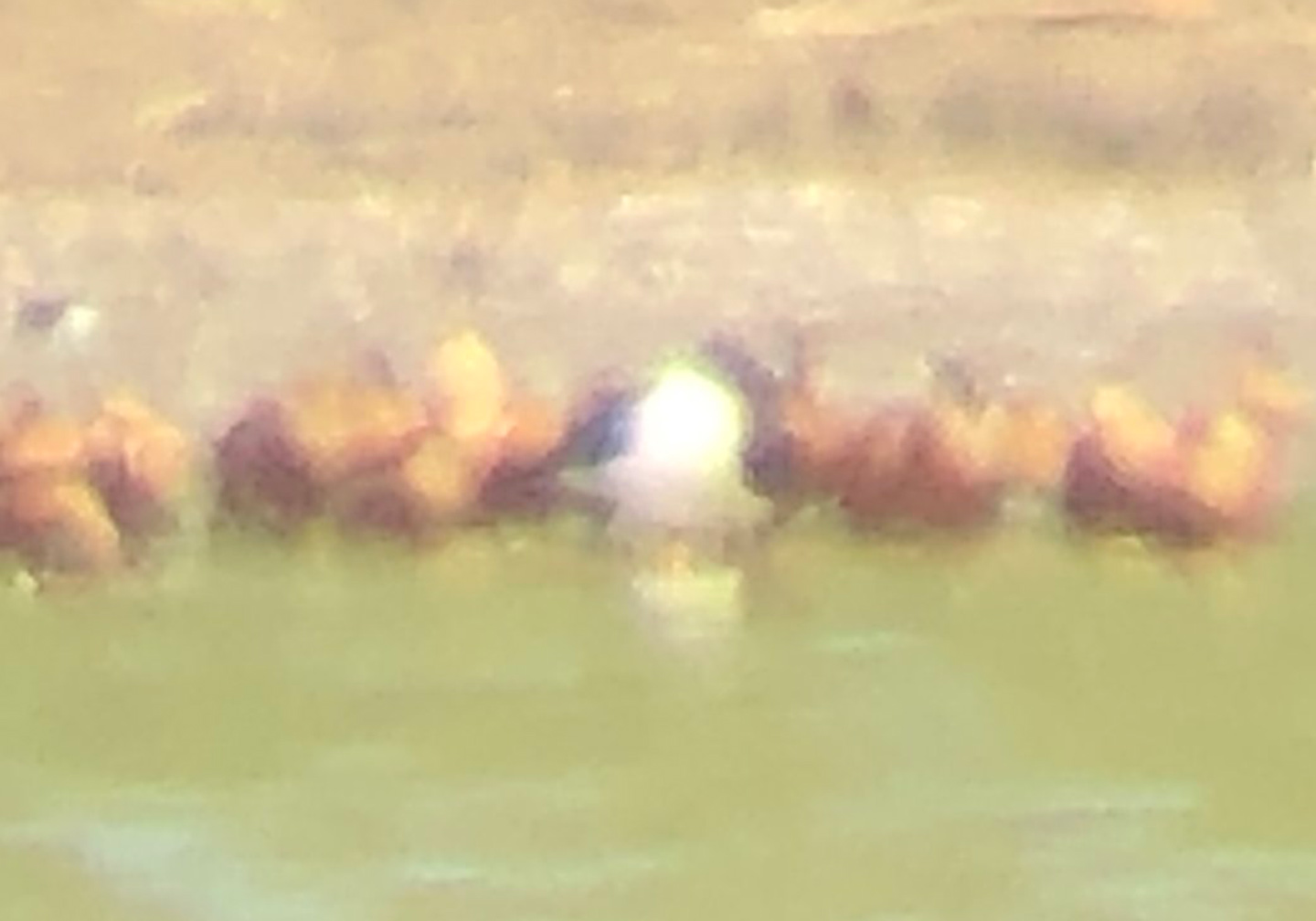 Poor record shot of the Magpie Goose at Sotimori

A major highlight here came during our only full day on the island where numerous Australian water birds were using Lake Sotimori. Amongst the Australian Pelicans, Royal Spoonbills, Wandering Whistling-Ducks, and Hardheads we found the Lesser Sundas apparent 1st record of Magpie Goose.

Outside of the West Papau where the birds aren't entirely uncommon in the southeast, this bird is accidental in Indonesia.  The only other vagrant sighting I found in eBird was from the Tanimbar Islands on Yamdena in November 2017 when one Magpie Goose was seen over the course of a week at Saumlaki Airport Lake.

And in Eaton's Birds of the Indonesian Archipelago, he mentions just a single sighting from Banda in 1988--making this the 3rd verified sighting for the archipelago.

There was one other interesting report I came across from a point in the middle of the Timor Sea about halfway between Timor and Australia--apparently in the Jabiru Oil Field.  During the week of July 15-19, 1991, Raymond Nojek reported 4 groups of 4-5 birds traveling east. The report came from the Jabiru Venture Floating Production Storage and Offloading ship stationed here.  This oil field has since been decommissioned, but the sighting is quite interesting.  The timing is outside of the cyclone season and seemingly makes no sense with any type of migration, post-breeding dispersal, etc. 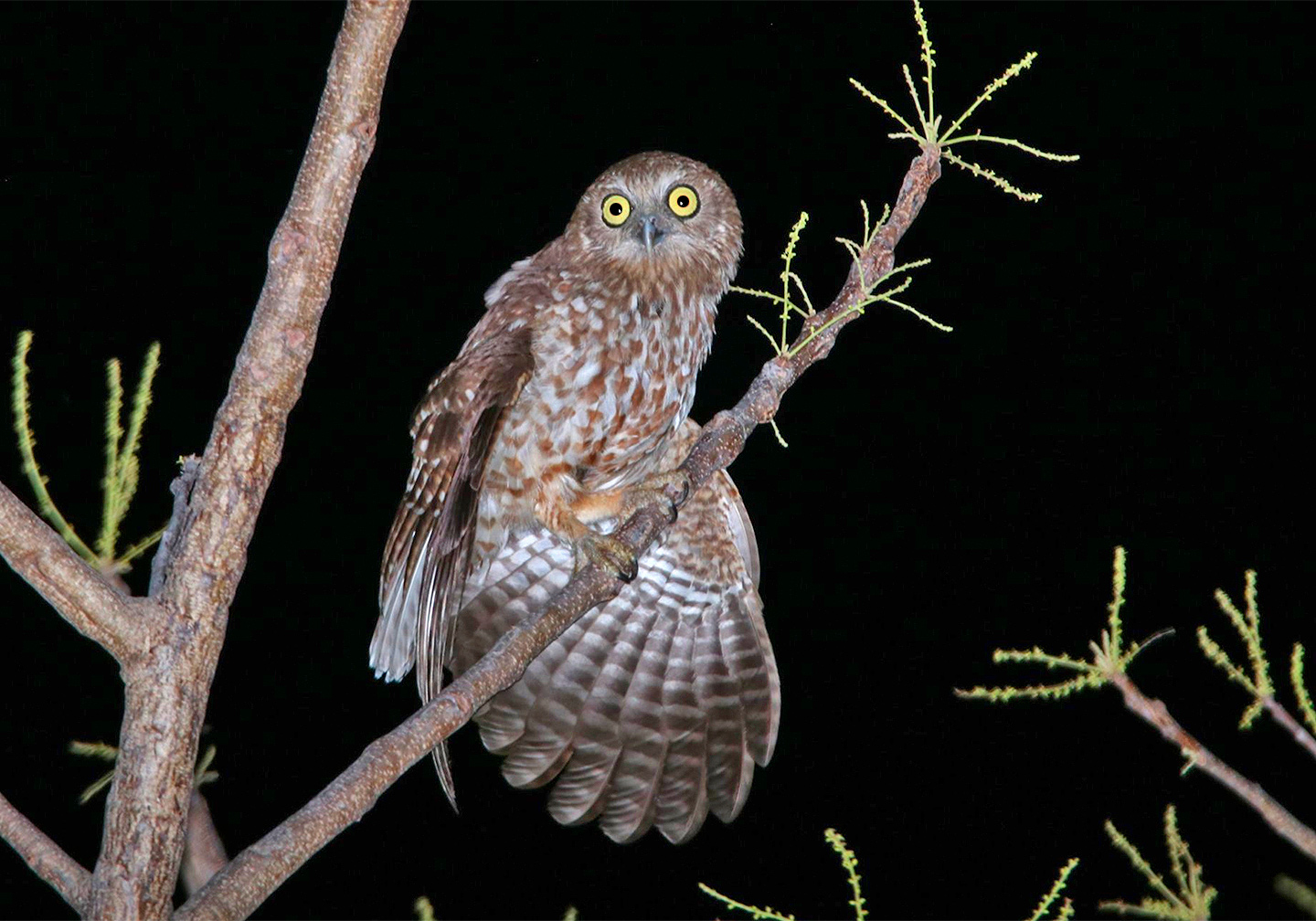 Rote Boobook past the end of the road on Rote

The hardest birding of the trip came on Timor--as was expected. We had several misses here, but they were somewhat expected in the rare and decreasing Timor Imperial Pigeon, and we did not discover the first Timor Green Pigeons in West Timor in more than 2 decades. We also missed Timor Spangled Drongo which was somewhat of a surprise. Otherwise, we picked up 31 island endemics here including the mythical and still yet described Mount Mutis Parrotfinch, only known from a handful of sites on and around Mount Mutis. We had great looks at the Tricolored Parrotfinch, and every other bird with the word Timor in its name. A surprise Channel-billed Cuckoo made a brief appearance in the mangroves near Kupang (according to our local guide, this was a sign of rains to follow)--and a Great Frigatebird flew by while we ate lunch on our last day in Kupang. 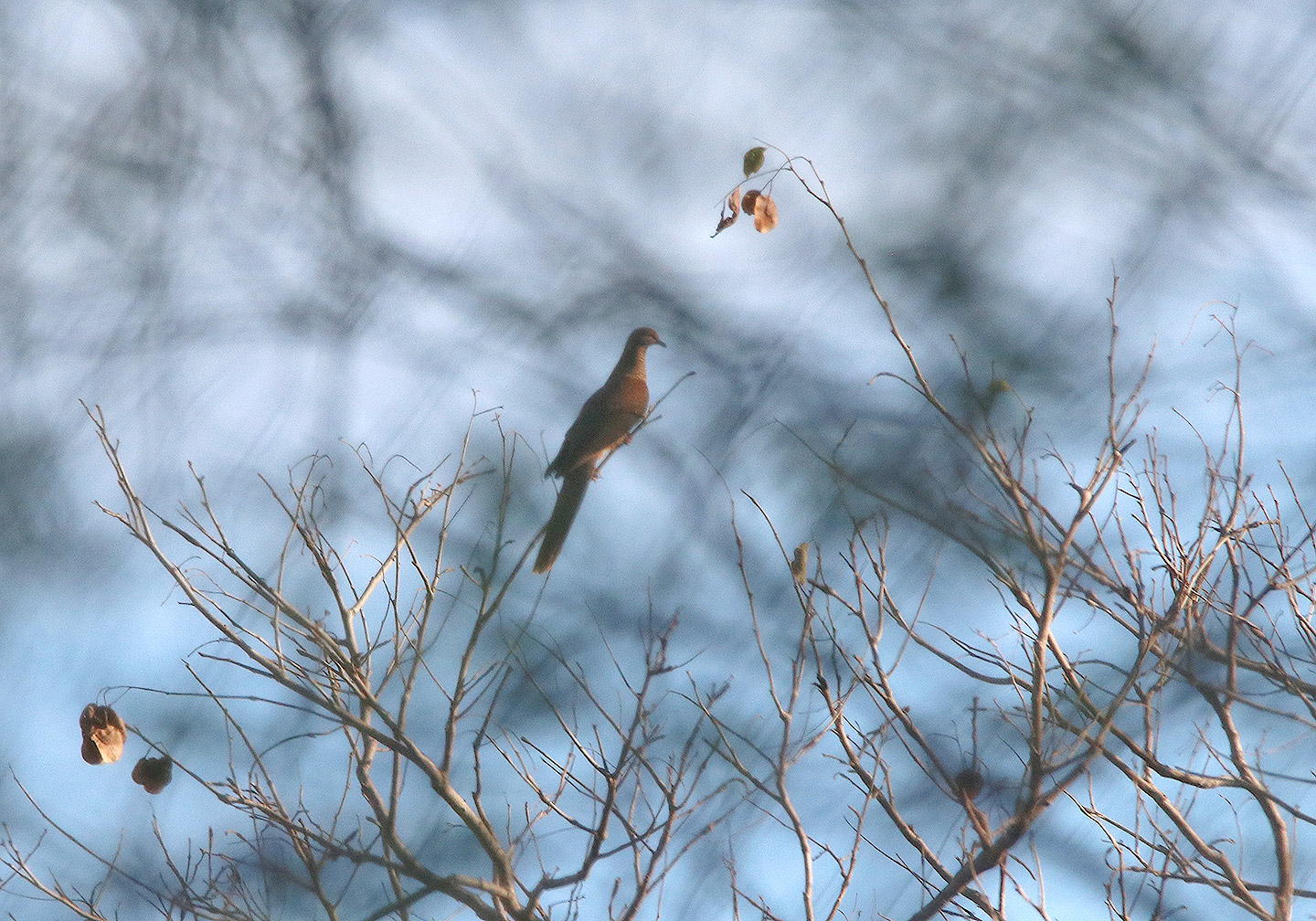 Timor Cuckoo-Dove on our final morning on Timor

Flores proved to be more difficult this year than expected, with several expected birds proving hard to find. We missed 3 species here--and they were tough ones to swallow with the declining Flores Green Pigeon, and roaming Wallace’s Hanging-Parrot and the majestic Flores Hawk-Eagle. Flores Crow was heard only, and Mees’s Nightjar only provided flyby looks in the spotlight. 25 Endemics were heard and seen in all, and two members of our party ticked off their last Asian Kingfisher species with White-rumped Kingfisher on our 1st morning touring here. A memorable morning listening to Bare-throated Whistlers and coaxing out Flores Shortwing, Flores Leaf Warbler, and Pygmy Cupwing was punctuated in the evening by the calls of several Flores Scops-Owl, which proved difficult for good looks this year. 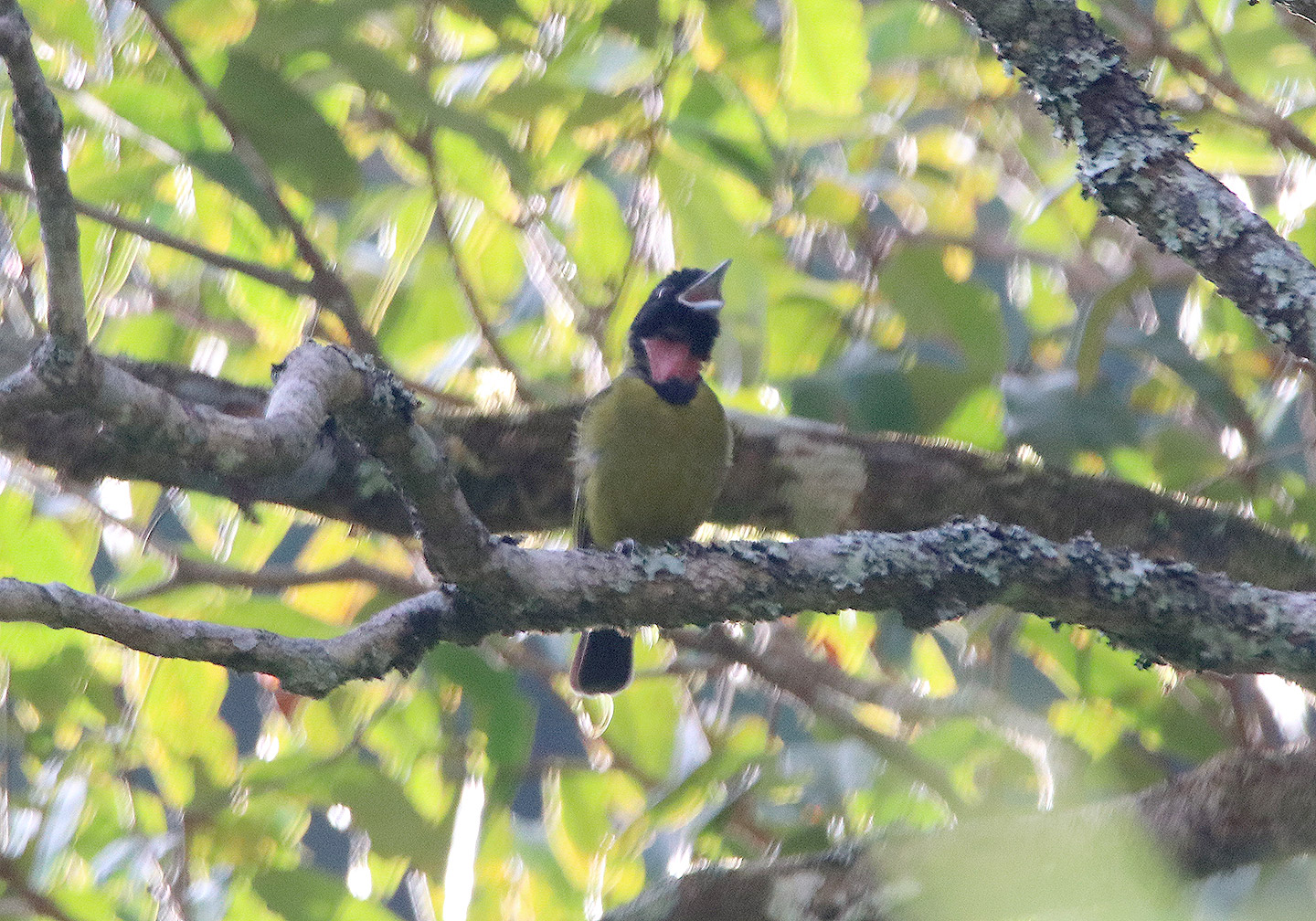 The incredible songster--Bare-throated Whistler on FLores

As expected the boat trip to Komodo National Park was a highlight not just for the dragons, but the birds here as well. The endemic Yellow-crested Cockatoo showed nicely at a nest site, while Green Junglefowl, Orange-footed Scrubfowl, and Wallacean Drongo all cooperated quite nicely. Here at the end of the dry season, the island was extremely dry, and hordes of Barred Doves visited the lone remaining man-made waterhole. From the boat, we had great looks at White-bellied Sea-Eagle, Great-billed Heron, Lesser Crested Tern, and a number of Lesser Frigatebirds. 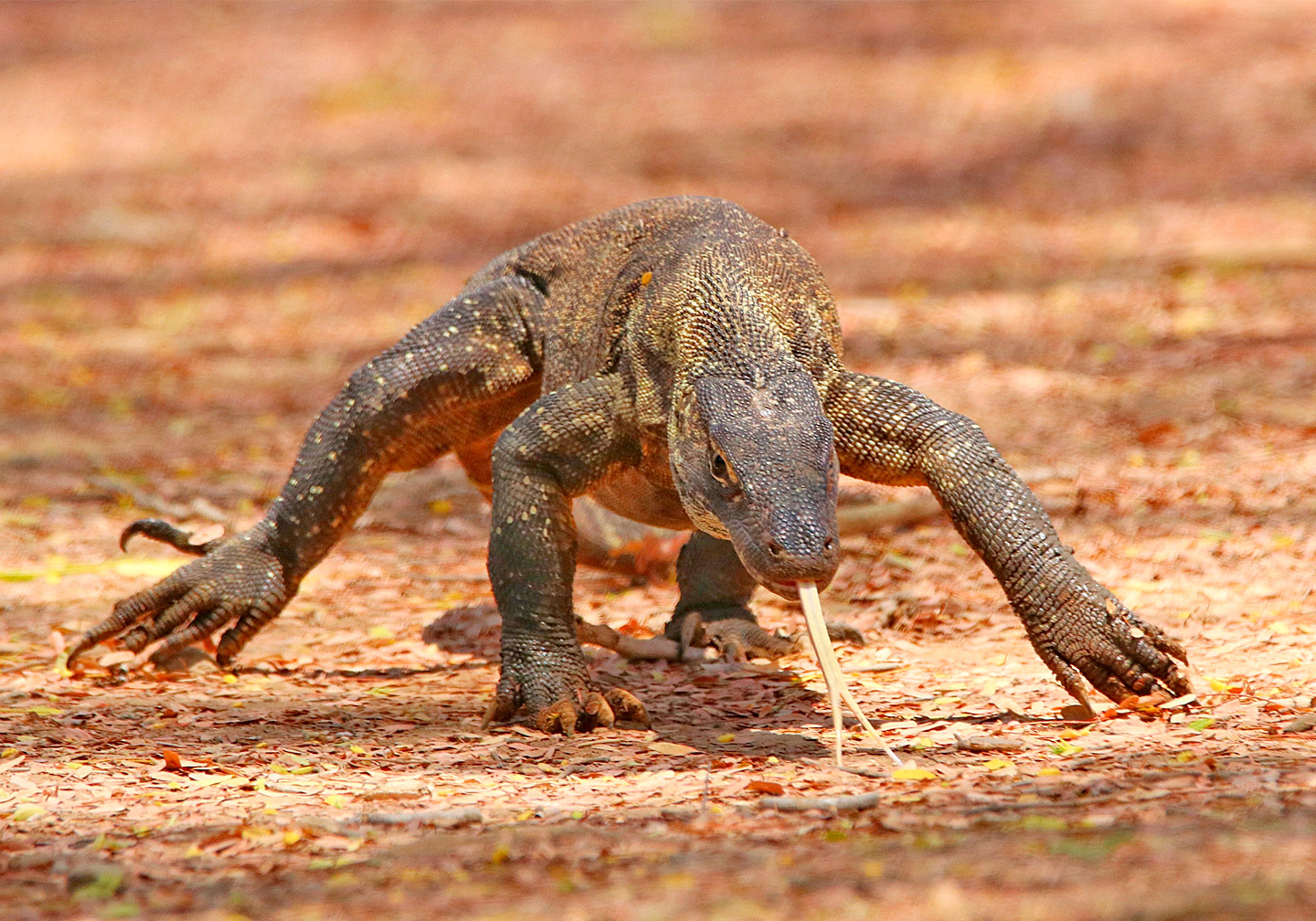 We wrapped up our tour on Bali, where comfortable accommodations, delicious food, and easy birding made for a memorable end to our tour. Another 21 endemics were picked up here over our final days.  In the highlands, Javan Whistling-Thrush, Flame-throated Barbet, Sunda Warbler, and Javan Flowerpecker were all added.  And we wrapped things up in West Bali National Park with unforgettable encounters with Javan Banded Pitta, Bali Myna, and Sunda Scops Owl. 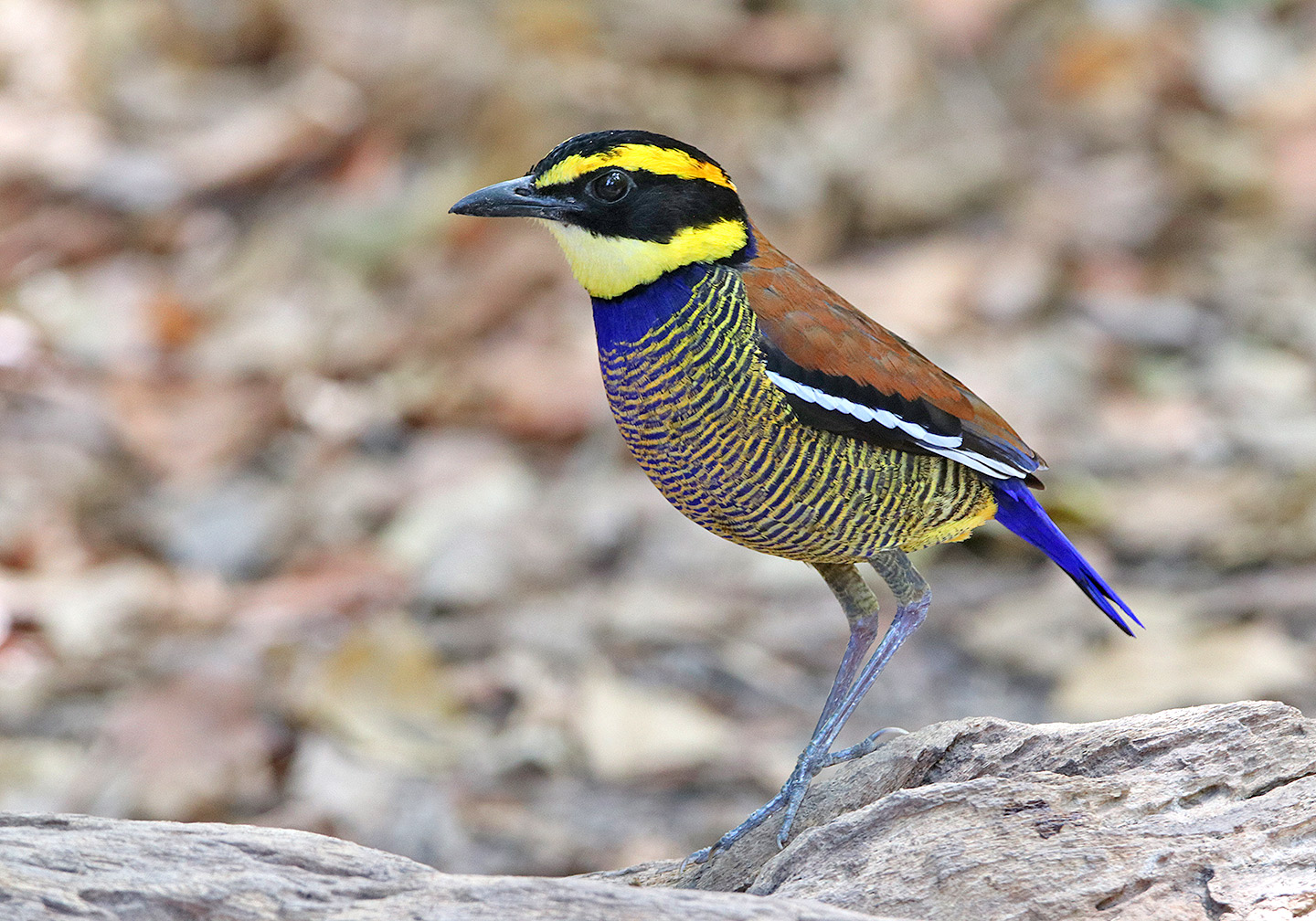 The Javan Banded Pitta was a great wrap on the tour

On our final morning, while several of us relaxed in the swimming pool of our hotel, a Black-thighed Falconet paid us a visit, giving the group one more bird before the trip concluded. 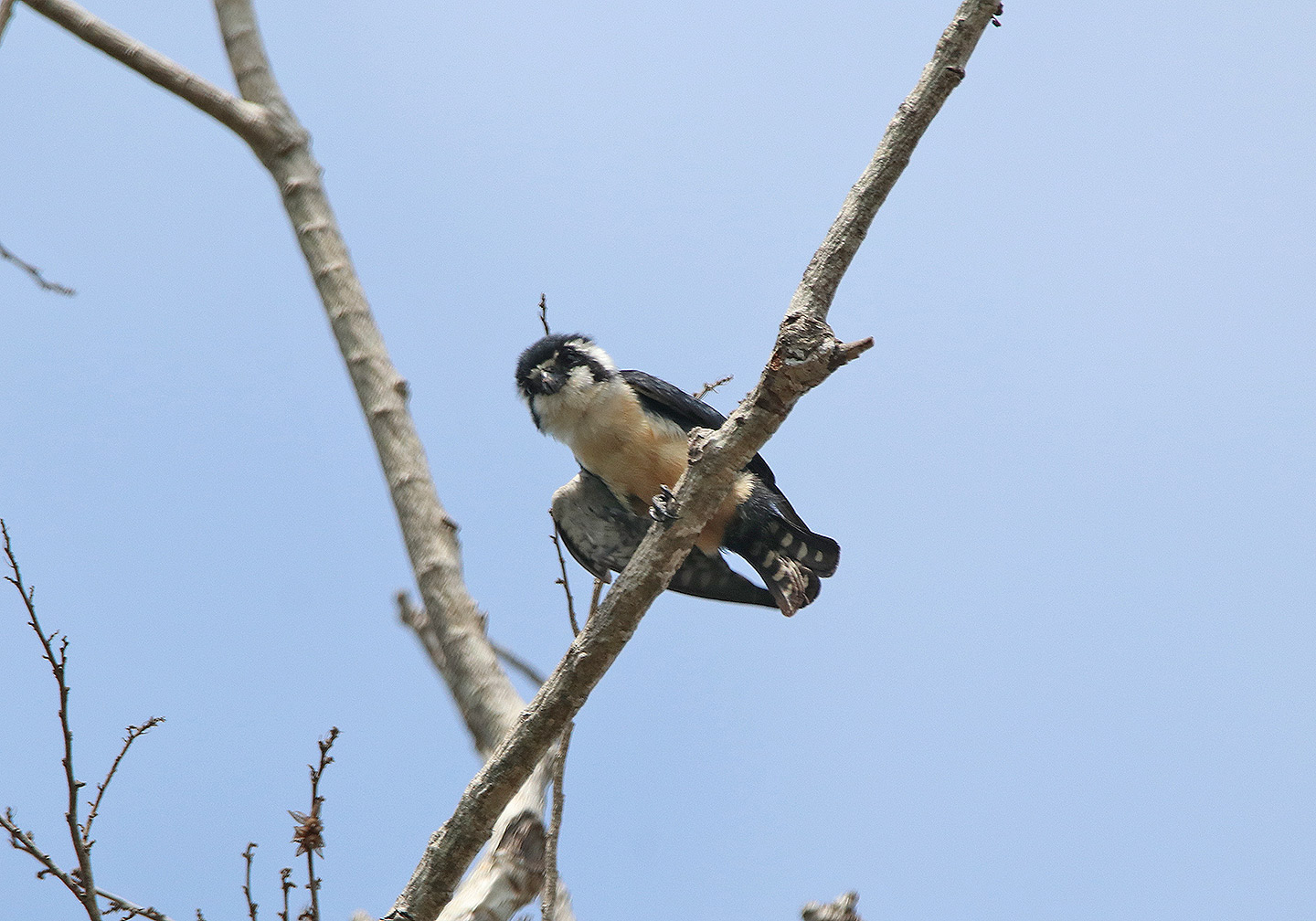 None of this would have been possible without the immense help from Bali Birding Tour and our local guides Heri (Sumba), Martin (Timor), and Samuel (Flores). Local knowledge is key to successful tours in this part of the world, and our 3 local guides provided immense logistical support, as well as up-to-date information on key species. If you are interested in joining us on a future tour to the Lesser Sundas, we plan on going back in 2021!

The photos are also split out island-by-island for easy perusal...

And we will be writing up (and sharing here) our detailed trip report in our annual "Field Notes" report later this spring.