We arrived in the middle of the night to a humid and barren international terminal at Ngurah Rai International Airport in Denpasar, the capital of the island and province of Bali. 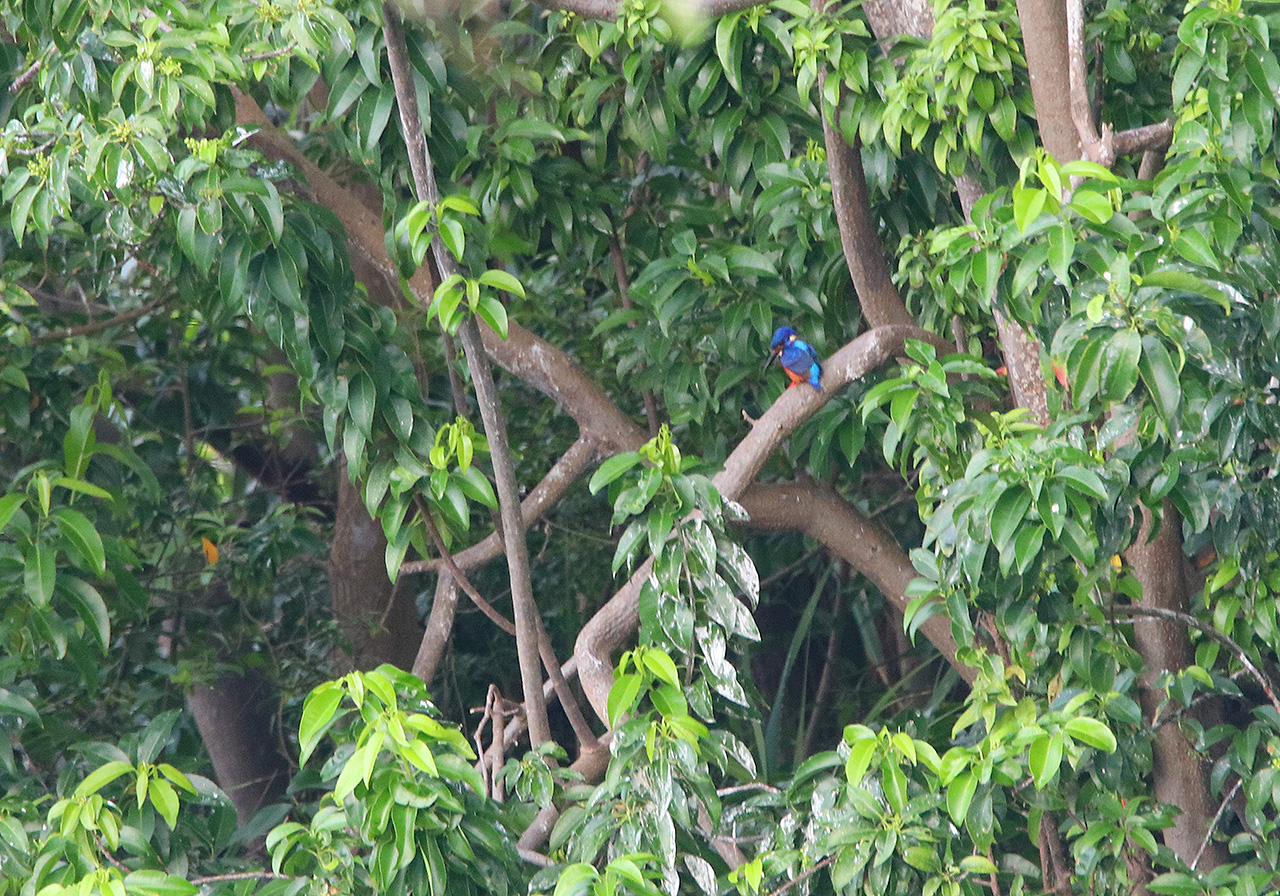 This Blue-eared Kingfisher was a Nusa Dua Favorite for me.

The long walk to immigration was slower than usual as Cam wasn't feeling well--Sam carried him while I trollied the bags.  By the time we got to immigration the lines were outrageous as several planes had just arrived--thankfully an employee waved us to a special line for special assistance--since we were traveling with a child.  The stares from the onlookers settling in for their wait could have burned holes through us.

We passed through without issue and after a short wait, our bags arrived--customs was just as quick, and we were soon on our way through the madness that was drivers awaiting arrivals--it was chaos.  And despite checking every single sign, I could not find our hotel shuttle--we'd been forgotten.  We ended up getting a taxi and paid the going rate for the trip across the southern peninsula to Nusa Dua (about 250,000 Rupiah--we got quotes from 200-400,000... at the time of this writing 14,000 Rupiah = $1 US Dollar).  The streets were quiet and we were at our hotel in no time.  We checked in, were escorted to our rooms and then came sleep.

View of the Conrad Bali Grounds from the Bar

Being in paradise didn't spur an early rise to enjoy it--we were exhausted and slept in before grabbing breakfast at the restaurant in the Conrad Bali.  You wouldn't have known you were in Bali from any other major resort in the west--the Conrad is ran like all Hilton's and the service is phenomenal.  It's just not an authentic Balinese experience.  A friend had told me that Nusa Dua was the soulless version of Bali.  It lacked the culture, the history, and the type of experience westerners envision when they think of Bali.  And he was right.  We stayed here as a cushion to land on when we arrived, knowing that our 4-year old was going to be out of his element, this would be a soft introduction to a world he could never have imagined.  So it was a perfect way to relax by the beach and pool for a few days to kick things off.  So that's what we did.

The gorgeous beach at Nusa Dua

Beside's heading up the road for dinner the following 3 nights, we didn't leave the hotel grounds during the day.  It meant that the birding was rather limited.  I quickly added the commonplace YELLOW-VENTED BULBUL and CAVE SWIFTLET that were a constant--along with EURASIAN TREE SPARROW and SPOTTED DOVE.  I managed to pick up my first PACIFIC REEF HERON as a flyby on the beach one afternoon.  But birding was slow, and the only bird I got really excited about was a flock of WHITE-HEADED MUNIA that landed in a palm tree outside our room. 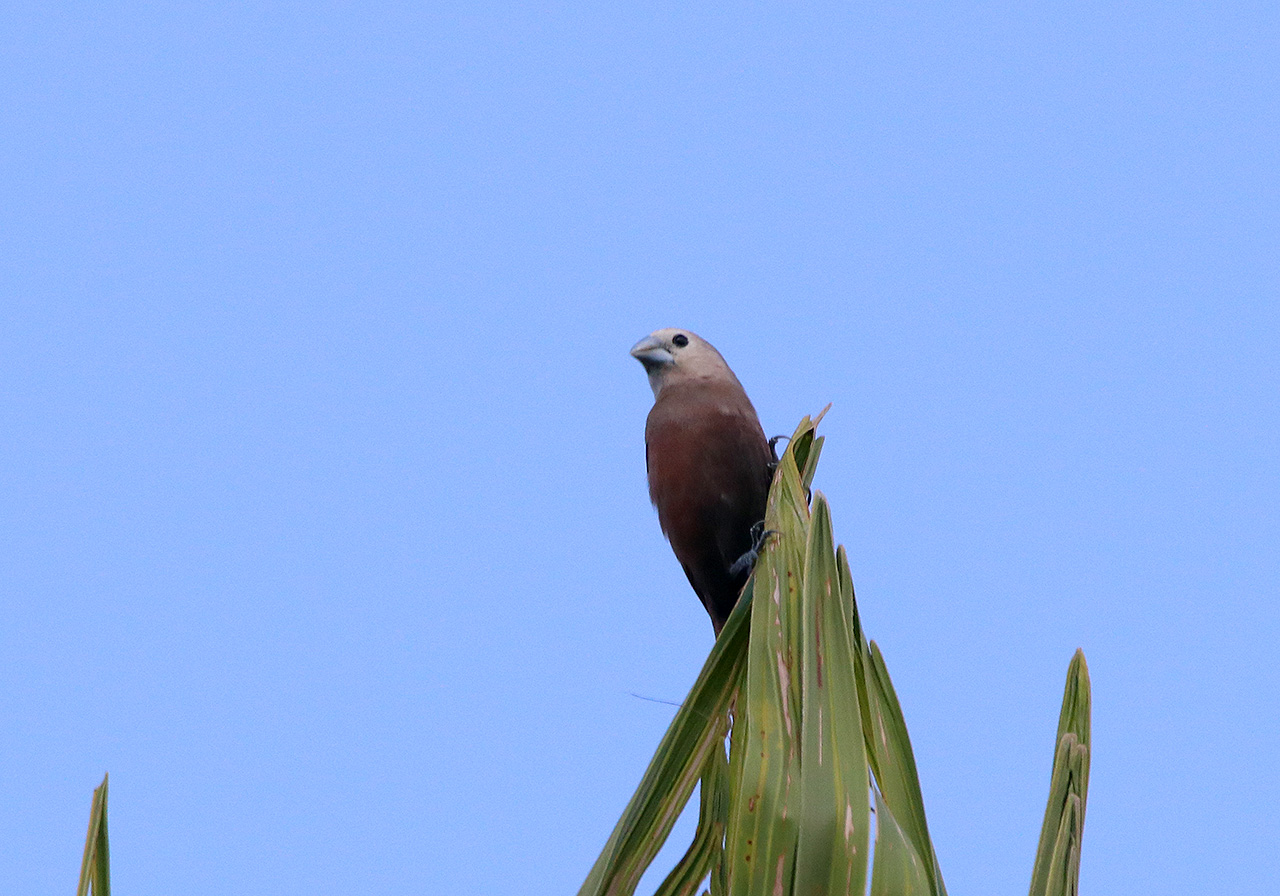 A White-headed Munia outside our room

So we relaxed and ate some excellent meals at Mr. Bob, Ketut's BBQ, and Blaze.  These aren't traditional Balinese spots--but fusion Balinese with "almost" Western pricing (a little bit less than eating in the states).

The BBQ Platter at Blaze

But don't worry I did go birding.  The last two mornings I set aside to head over to the nearby Nusa Dua Lagoon (or Lagun, or Waste Water Plant, or Wastewater Treatment Plant, etc) at sunrise and spend a few hours tracking down my first real Bali birds.  The lagoon was a 15-minute walk from the hotel--or a 30,000 Rupiah ($2.00 USD) taxi ride. It was convenient to get to.  I just didn't know how I should go about birding it.  There isn't a lot of information online, and none of the info I did find mentioned how to go about getting permission--so I did what I thought was logical--I walked through the open front gate, past people busy working, and made my loop around the ponds.  Nobody stopped me, asked questions, or gave me a hard time about being there.  Just nods and smiles in passing.

One of several signs at Nusa Dua Lagoon

So my advice is, if you go to the Nusa Dua Lagoon, walk in the main gate at the southwest corner and follow the paved trail around the outside of the ponds, then exit through the gardens in the southeast corner.  I arrived just after 6:00 AM both days since that was about the earliest I'd seen checklists on eBird.  I'm not sure what the open/close time is, but I felt like being there early was going to be the best for birding anyways.

Walking in, the main ponds are to your right--and I was immediately impressed by the sheer number of wading birds I could see without even lifting my binoculars.  GREAT, INTERMEDIATE, and LITTE EGRETS were joined by GRAY and PURPLE HERONS.  There were STRIATED HERON, BLACK-CROWNED NIGHT-HERON, and JAVAN POND HERON on every tree. It was incredible. 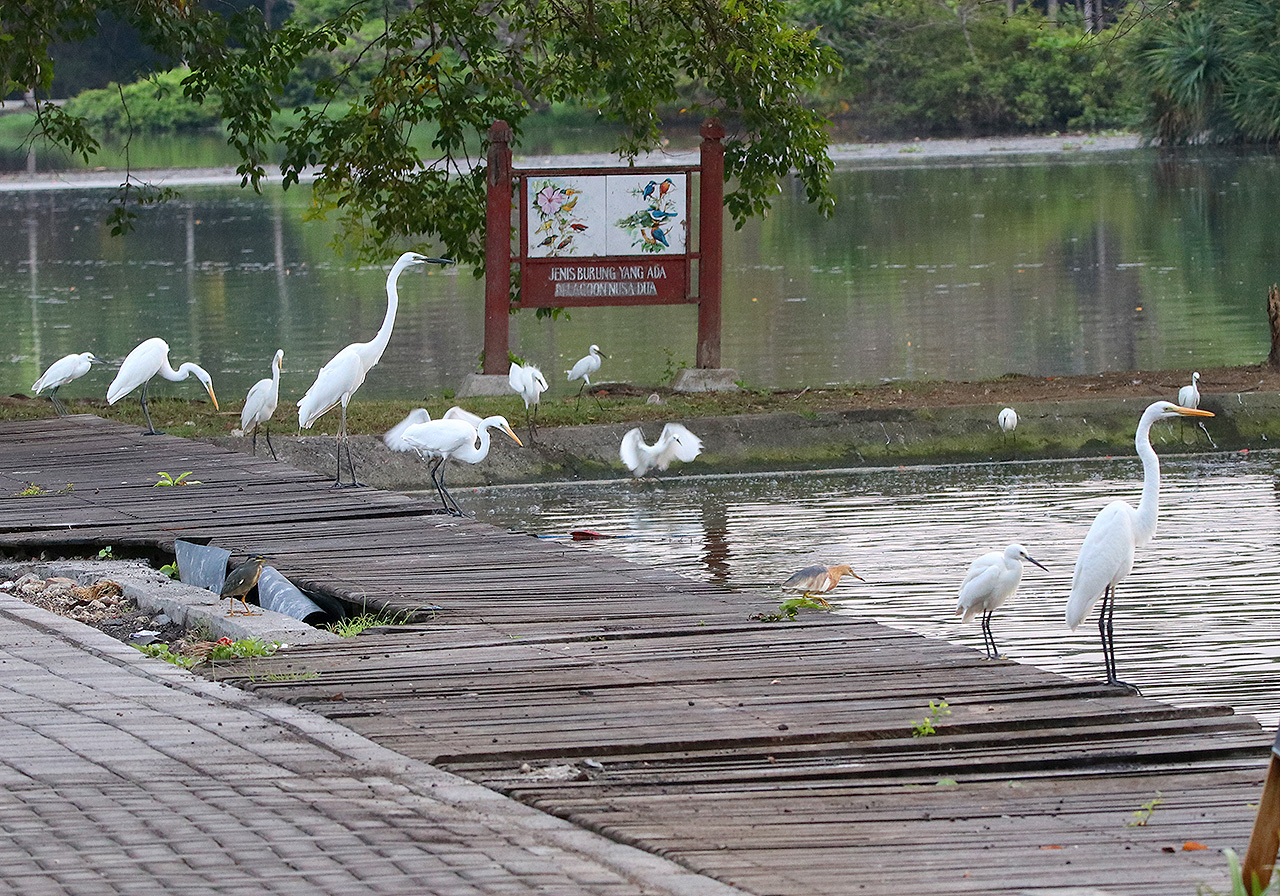 Great, Intermediate, and Little Egrets (plus a pond heron and Striated Heron)

A flash of blue caught my eye as I followed a SMALL BLUE KINGFISHER flying across the water--it was gorgeous!  There were cormorants too--3 species all sitting in various tree tops--LITTLE PIED, LITTLE BLACK, and plain old LITTLE CORMORANT.  There were also terns, with LITTLE TERN being present in decent numbers, while a small flock of GULL-BILLED TERN and a single COMMON TERN passed over while I walked the grounds. 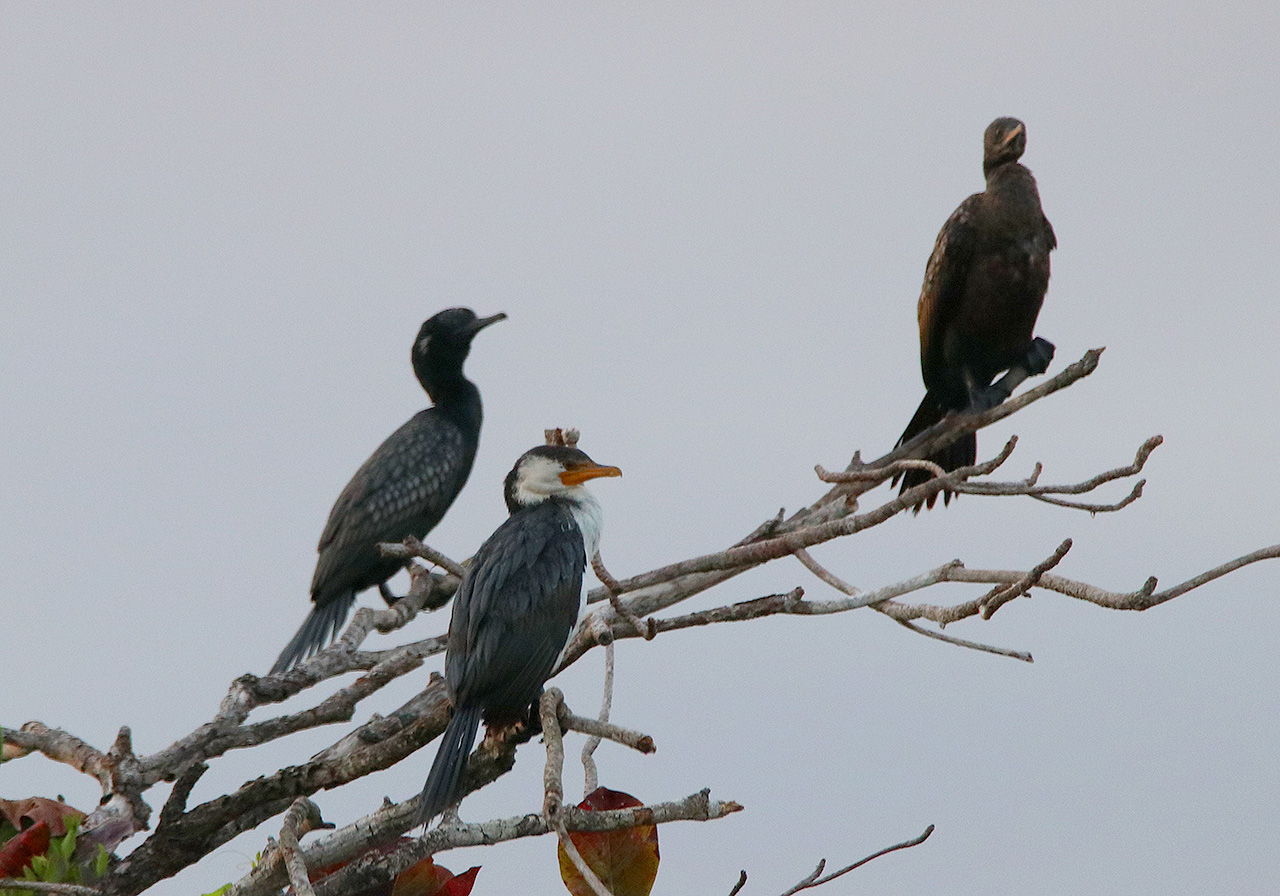 It was overwhelming as there was so much new--but there was also quite a bit of singing and calling from the mangroves that lined the outside of the pond, and I didn't know most of the sounds... Slowly but surely birds worked their way into the open.  There were OLIVE-BACKED SUNBIRDS and GOLDEN-BELLIED GERYGONE (pronounced jerr-ah-go-knee), and COMMON IORA and CINEREOUS TIT.  New, new, new, new.  LARGE-BILLED CROWS called incessantly from the treetops, while PACIFIC SWALLOWS skimmed the water. 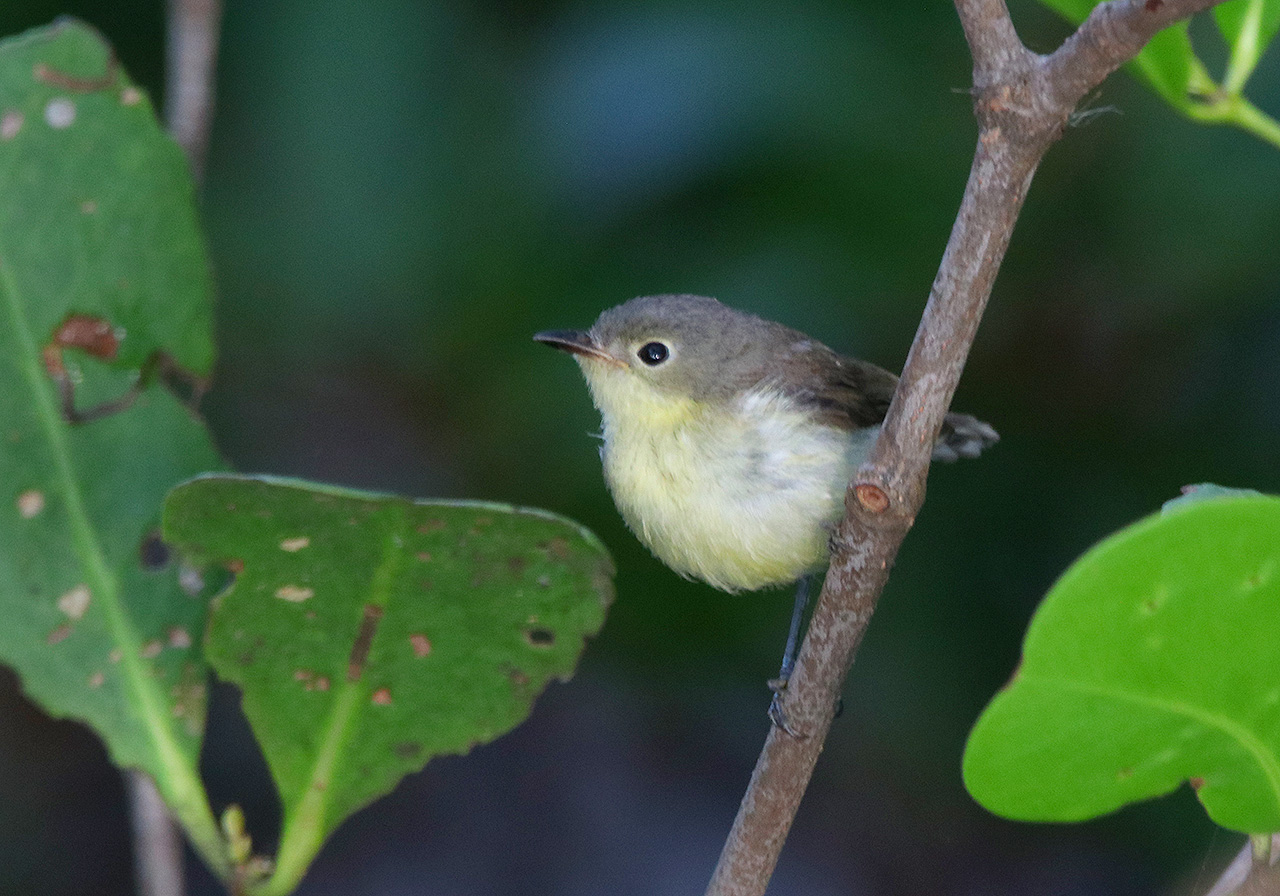 A pair of PACIFIC BLACK DUCK flushed from a hidden bank and disappeared somewhere else on the ponds. Slightly disappointed I didn't get a photo.  The songbirds in the mangroves weren't at all responsive to pishing, so I had to be patient and wait for them to emerge and see.  Such was the case with MALAYSIAN PIED-FANTAIL and WHITE-SHOULDERED TRILLER which both made a racket out of sight before finally emerging to be identified. 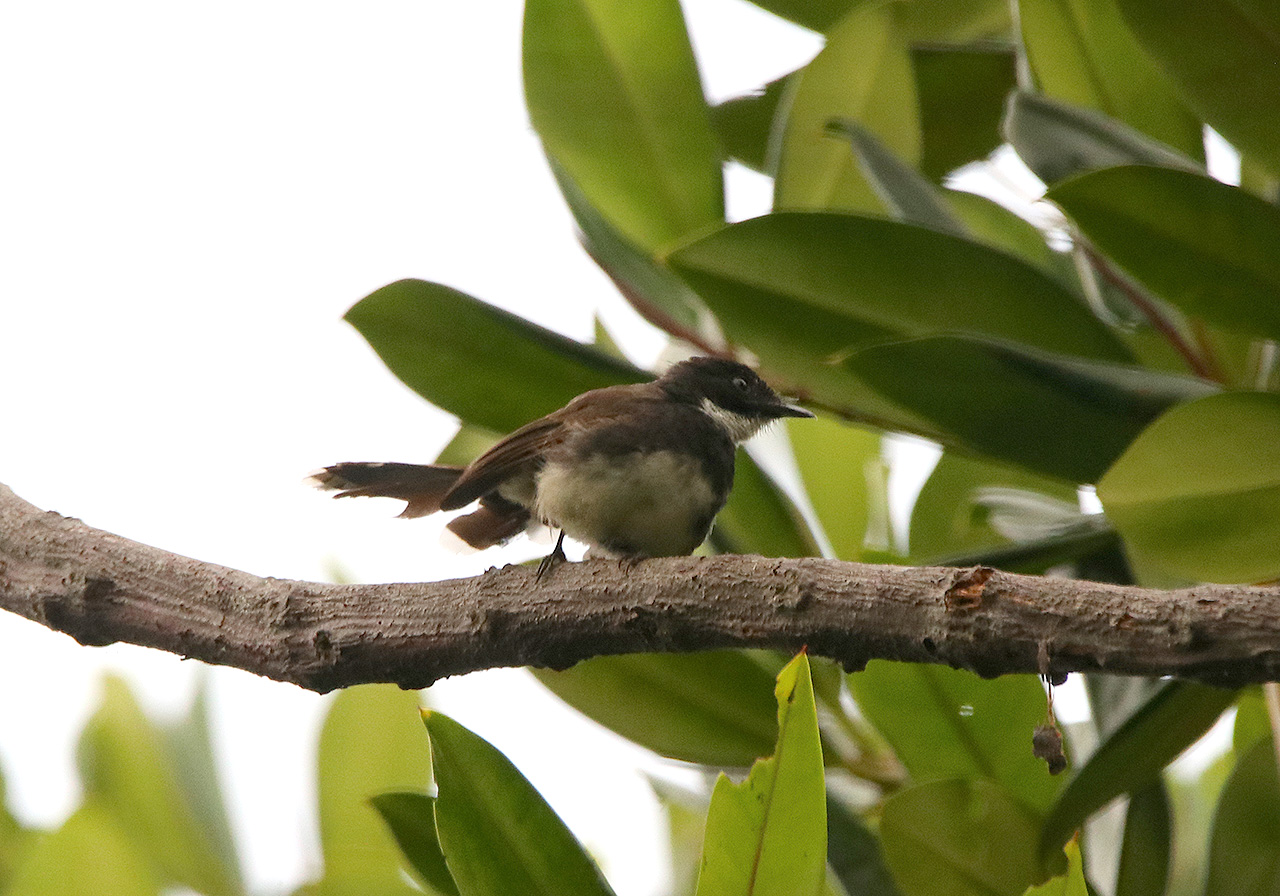 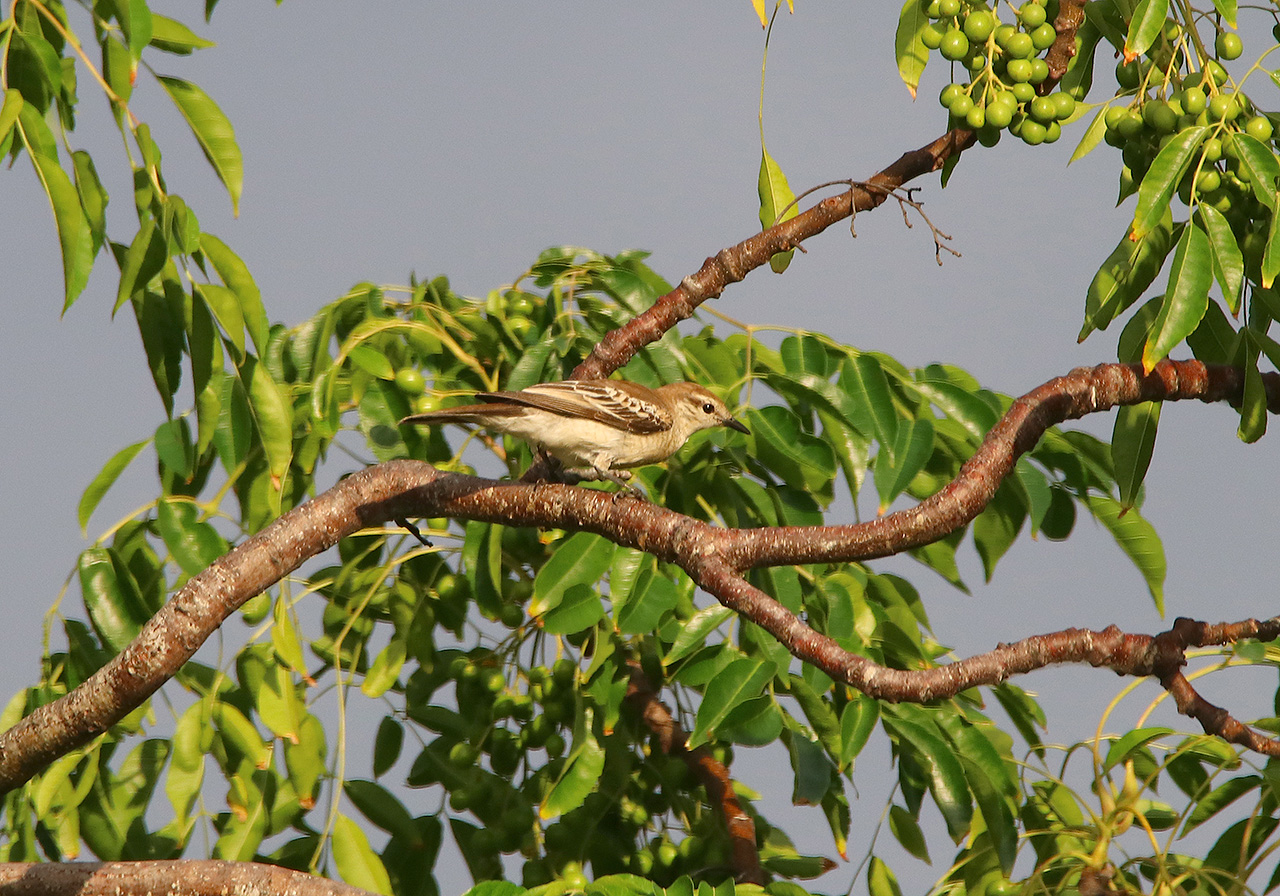 A pair of drongos emerged across one pond and would be the only GREATER RACKET-TAILED DRONGOS I saw of the trip.  I caught a flash of color flying and realized it was a green pigeon.  The male bird landed in a tree in great sunlight and I had my lifer PINK-NECKED PIGEON! I saw several more female birds, but none were as striking as that first individual. 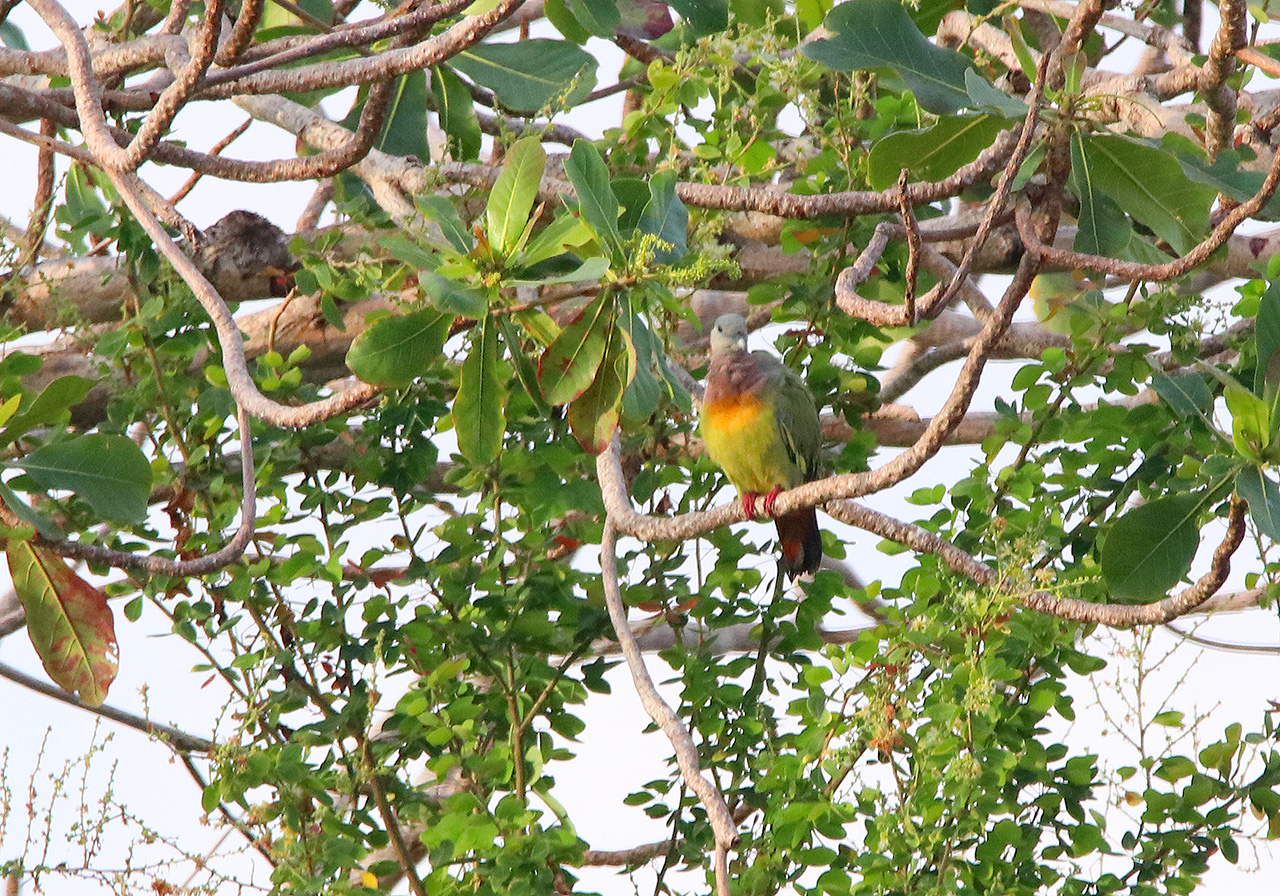 As I rounded the last corner for the long east path to the exit the kingfisher action went wild.  I saw 4 species in the last 1/4 mile including several SMALL BLUE KINGFISHER, a lone SACRED KINGFISHER, a handful of COLLARED KINGFISHER (the defacto-every habitat kingfisher throughout Indonesia), and my personal favorite of the trip--a BLUE-EARED KINGFISHER, which sported a stunning combination of blue, green, purple, rufous, and white in its plumage. 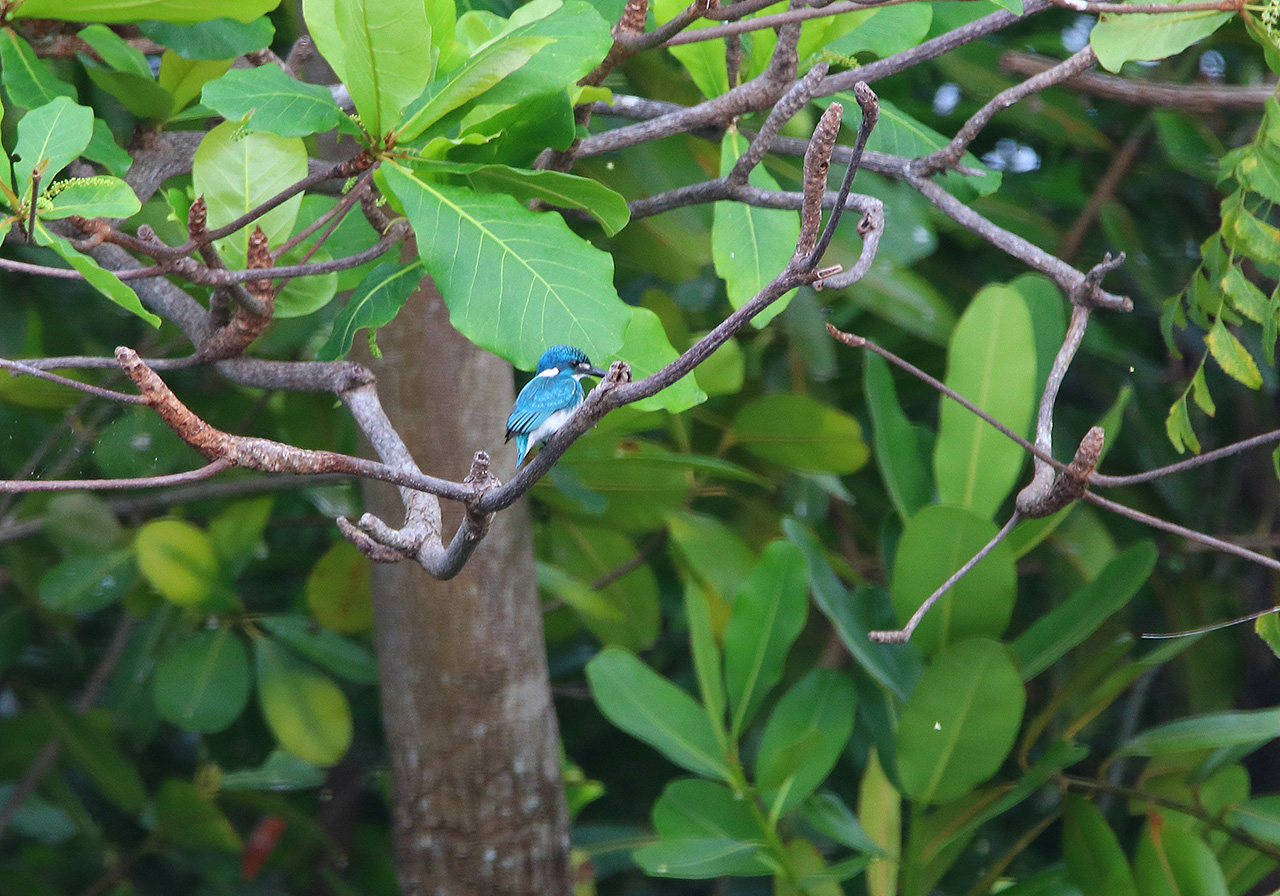 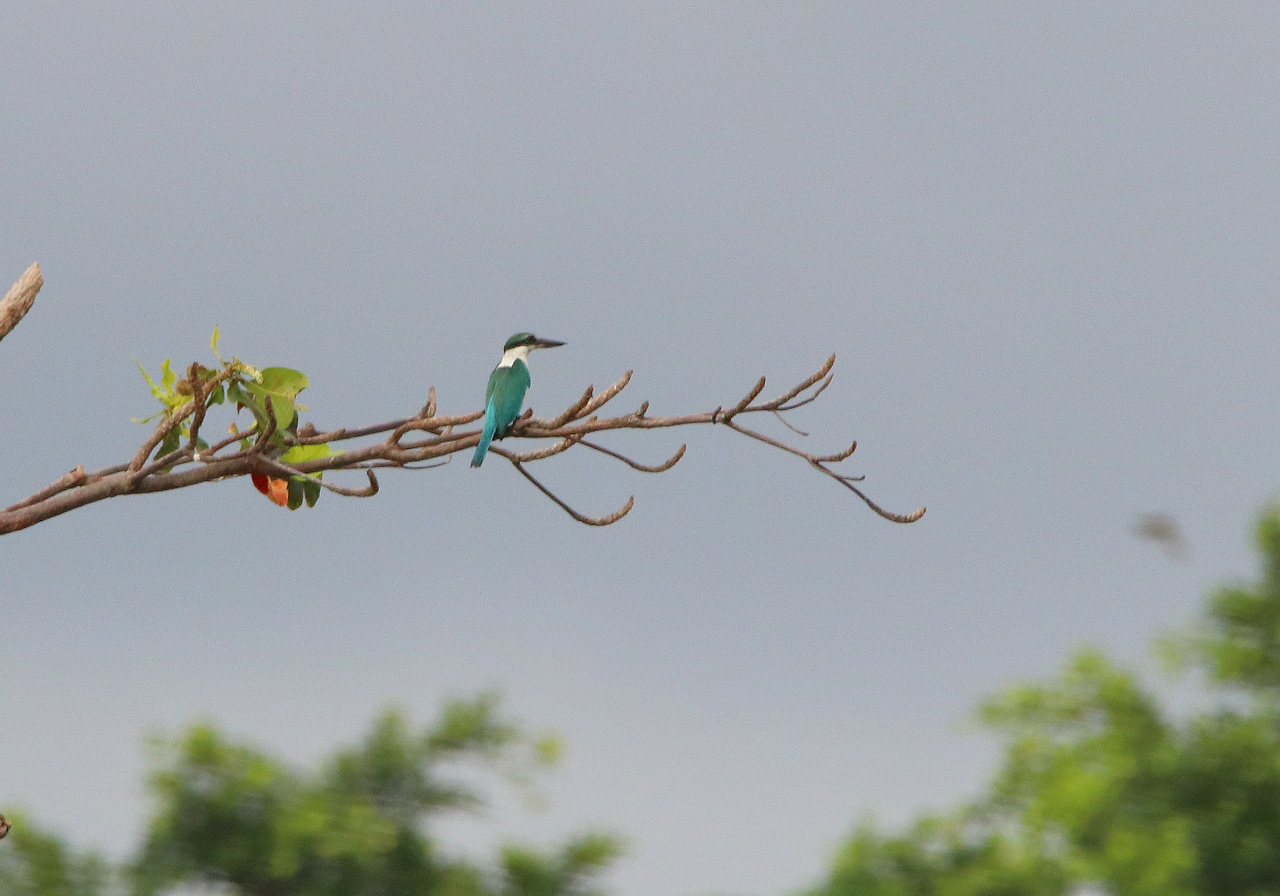 The first morning was a nice haul as I tallied 47 species in just over 90 minutes.  I finished up the loop and headed back to the hotel for another day of relaxing.

Looking southwest from the northeast corner of Nusa Dua Lagoon

The following morning, September 6, I followed the same routine, and made my way to the Nusa Dua Lagoon in the dark, arriving by 6:00 AM, and following the same loop around the ponds.  The birding was much the same as the previous day, only I paid closer attention to my counts for waders as I felt I had severely underestimated--and I had, by as much as 1/7 the actual number of birds--for instance on the second trip I counted 81 LITTLE EGRET as compared to just 11 the day before.

Lots of Egrets and Terns

With more of a focus on counting things, I wasn't as steadfast on trying to wait for birds to emerge from the mangroves.  Instead, I kept my eyes out over the trees in the open.  It paid off with a RACKET-TAILED TREEPIE as a prize for the day. 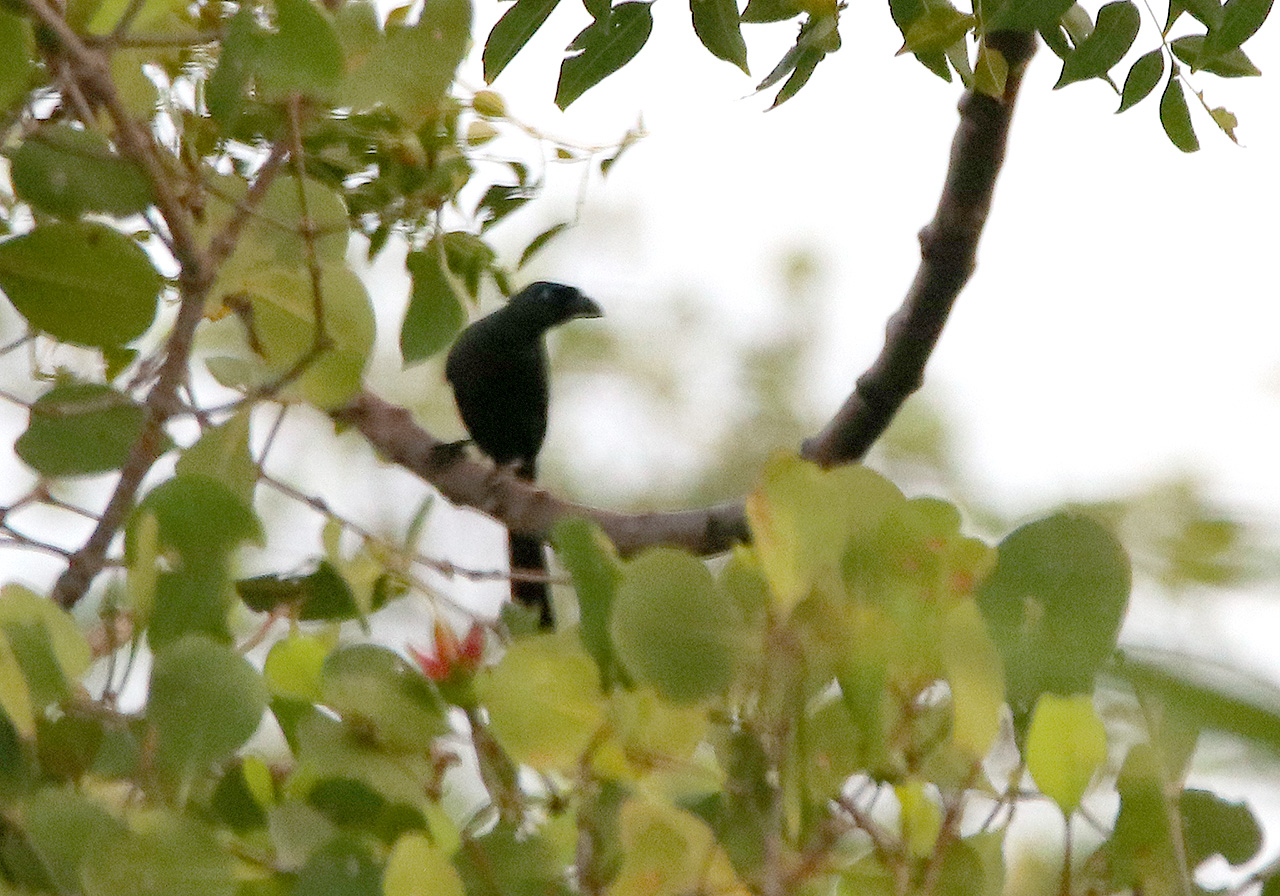 Record shot of a Racket-tailed Treepie

The only other new bird I added was a SCARLET-HEADED FLOWERPECKER which was the most stunning bird the water treatment plant had to offer. 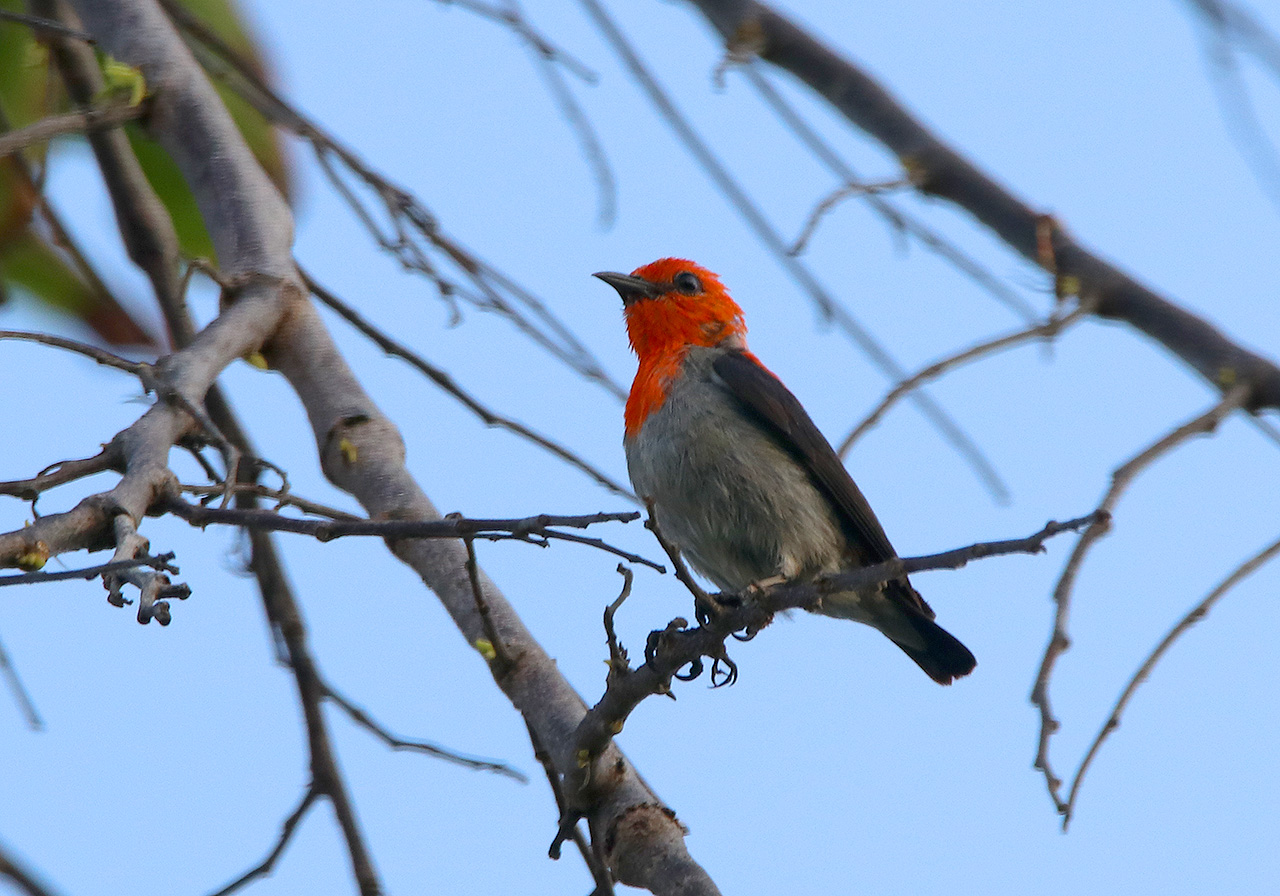 What's not to love about a Scarlet-headed Flowerpecker?

I did take some time to photograph several birds from the previous day, with better light including JAVAN POND HERON, LITTLE TERN, PACIFIC REEF HERON, and PURPLE HERON. 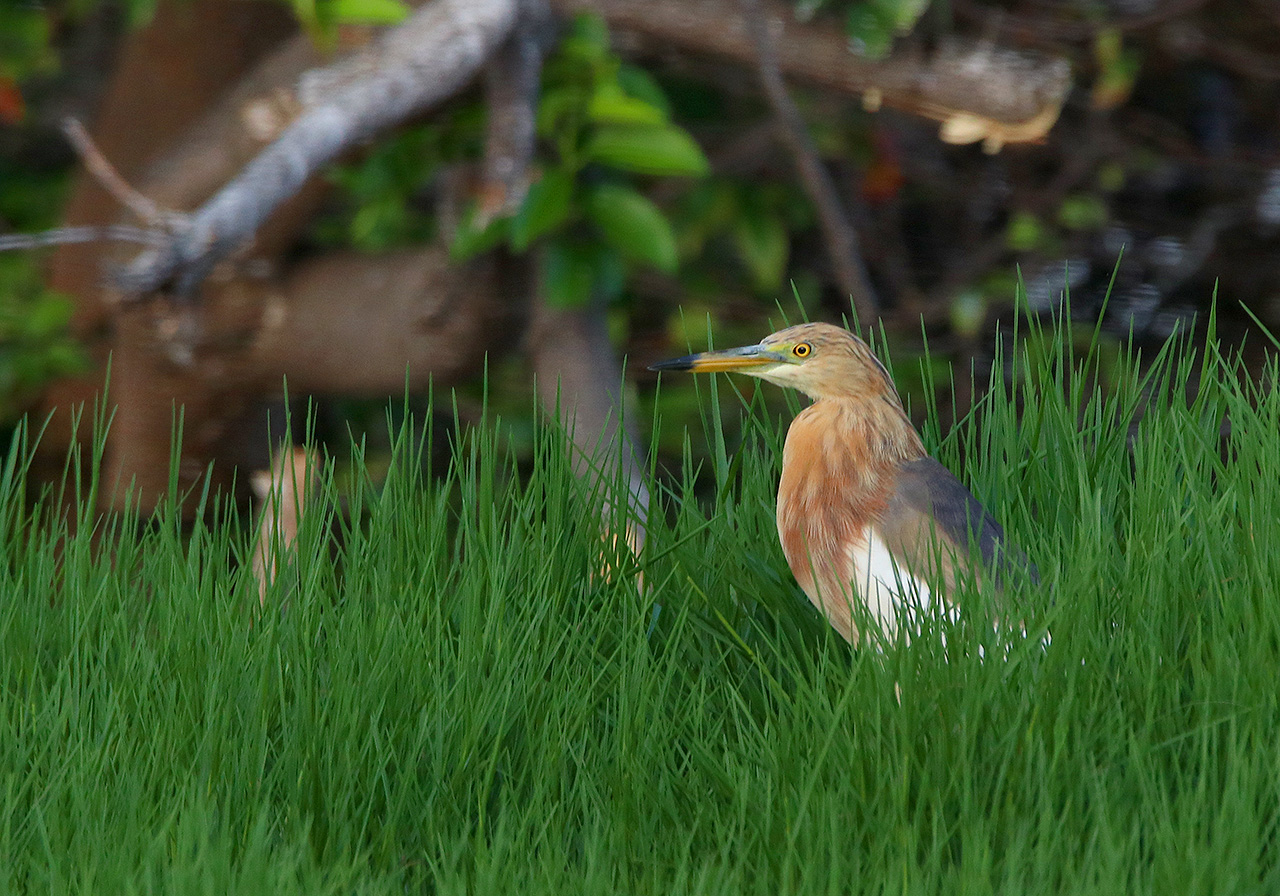 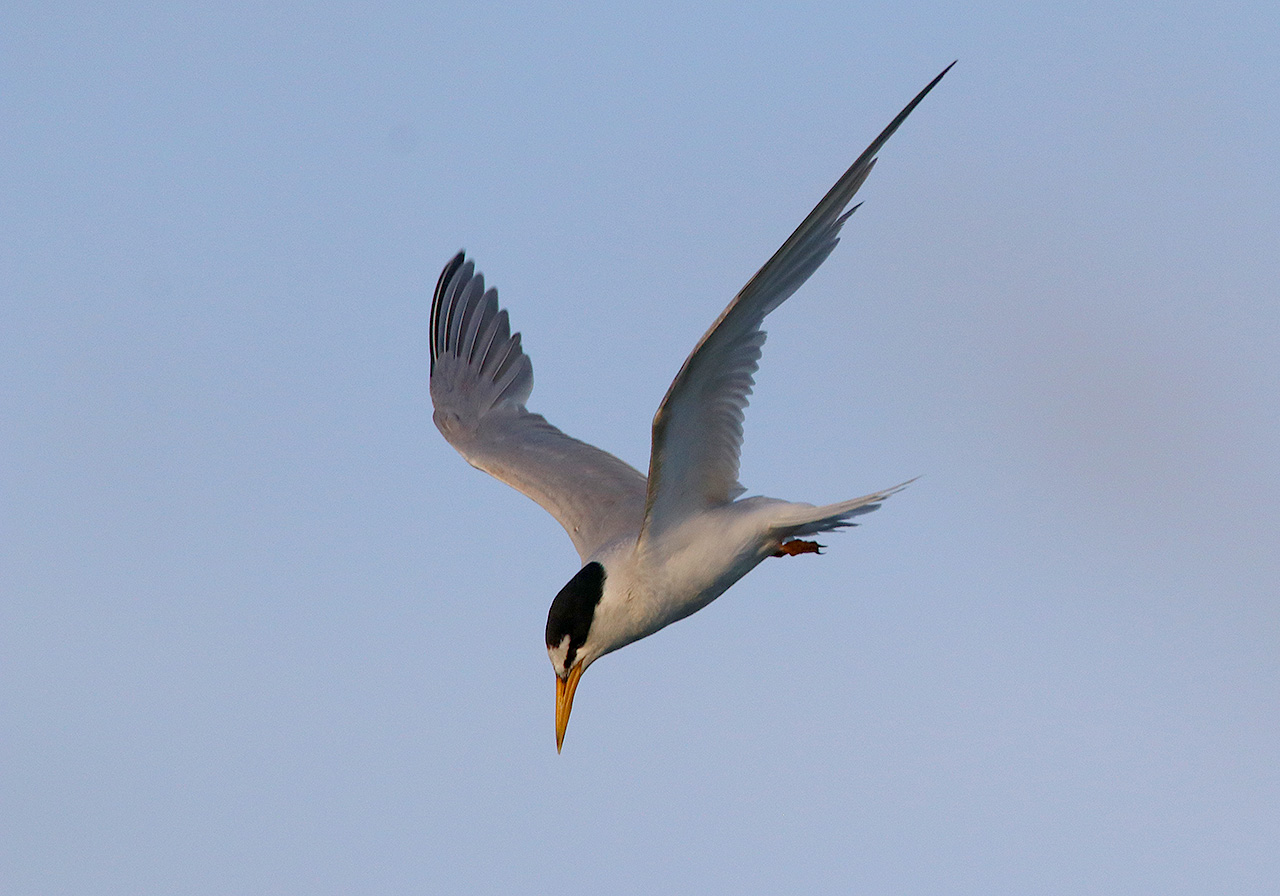 Little Tern about to dive 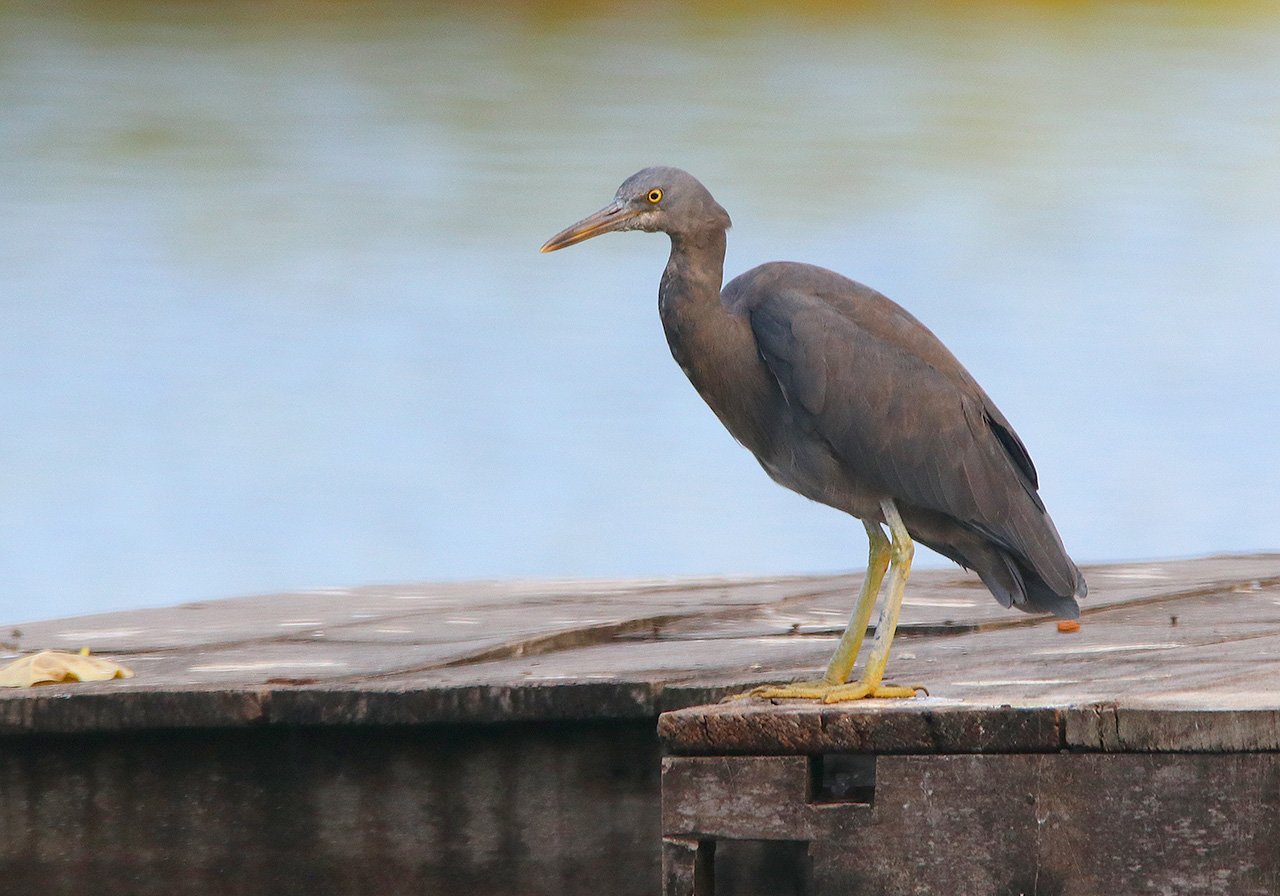 My best shot of a Pacific Reef Heron--not on a reef... 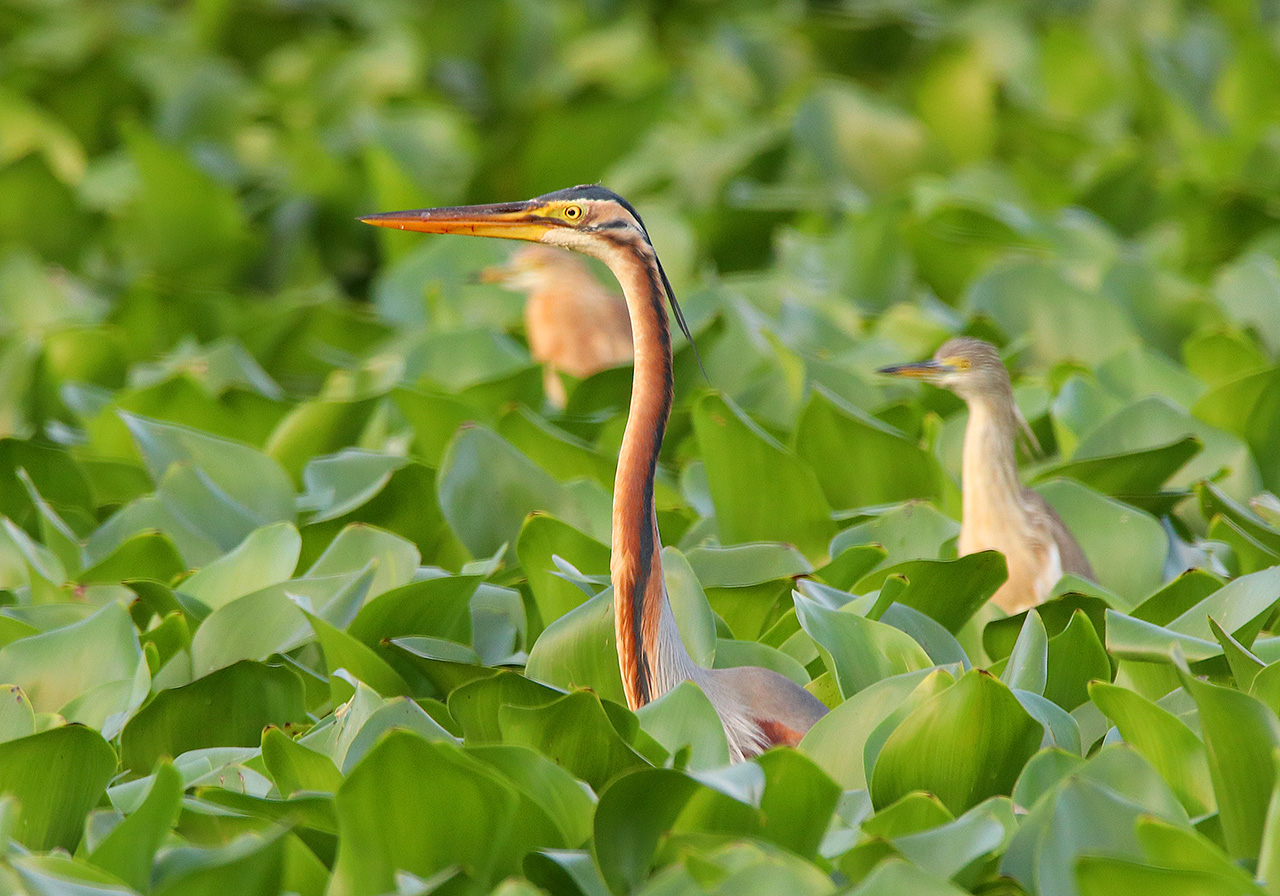 In the first 4 days, I tallied 31 new life birds, and most of that was on day 3 at the lagoon. It was an enjoyable and relaxing introduction to the island.  I had gotten on a normal sleep schedule and was ready to head to the interior and west of the island, where I knew my bird list would explode.