We left Nusa Dua taking a day to do some touristy things that Cam would enjoy. We started at the Turtle Conservation and Education Center where Sea Turtles are hatched and then released into the wild under the supervision of the volunteer staff. I'm not entirely sure how ethical the whole thing is--they seemed to be doing a service, but I question, why they didn't just monitor turtle nests and allow for a natural hatch and release. Cameron got to release a turtle which was exciting for him, and hopefully, the whole thing isn't just a big sham. 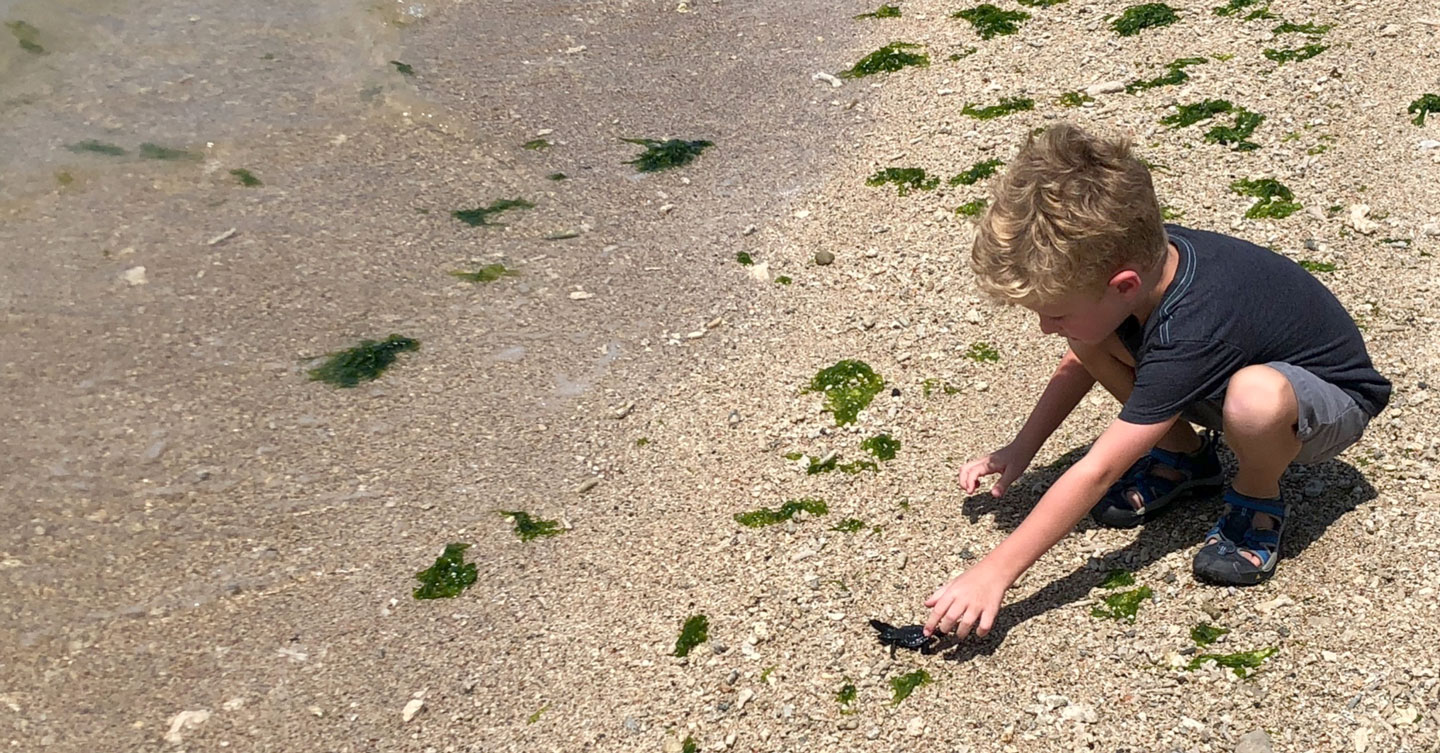 Our next stop was to visit the Bali Bird Park--an Aviary about 45 minutes from Denpasar next to the Bali Zoo. I didn't expect much but was quite surprised at the breadth of exhibits, the quality of the birds, and the free flight show which featured mostly birds from Indonesia (they had a pair of macaws though, smh...). Their "Bali" room, is a walk-in, with free-flying species found in Bali--notably a nice selection of Bali Myna and Javan Myna that allowed for close observation. 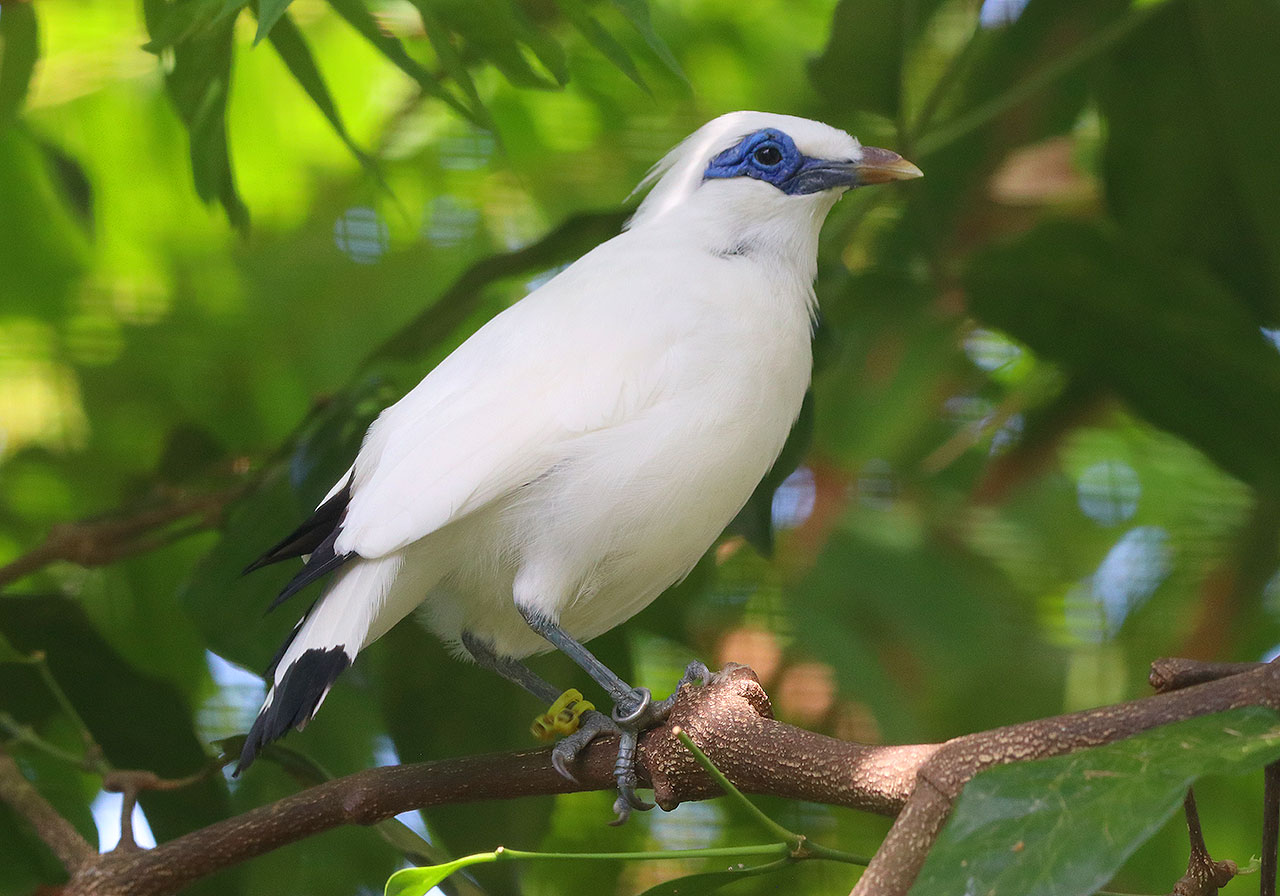 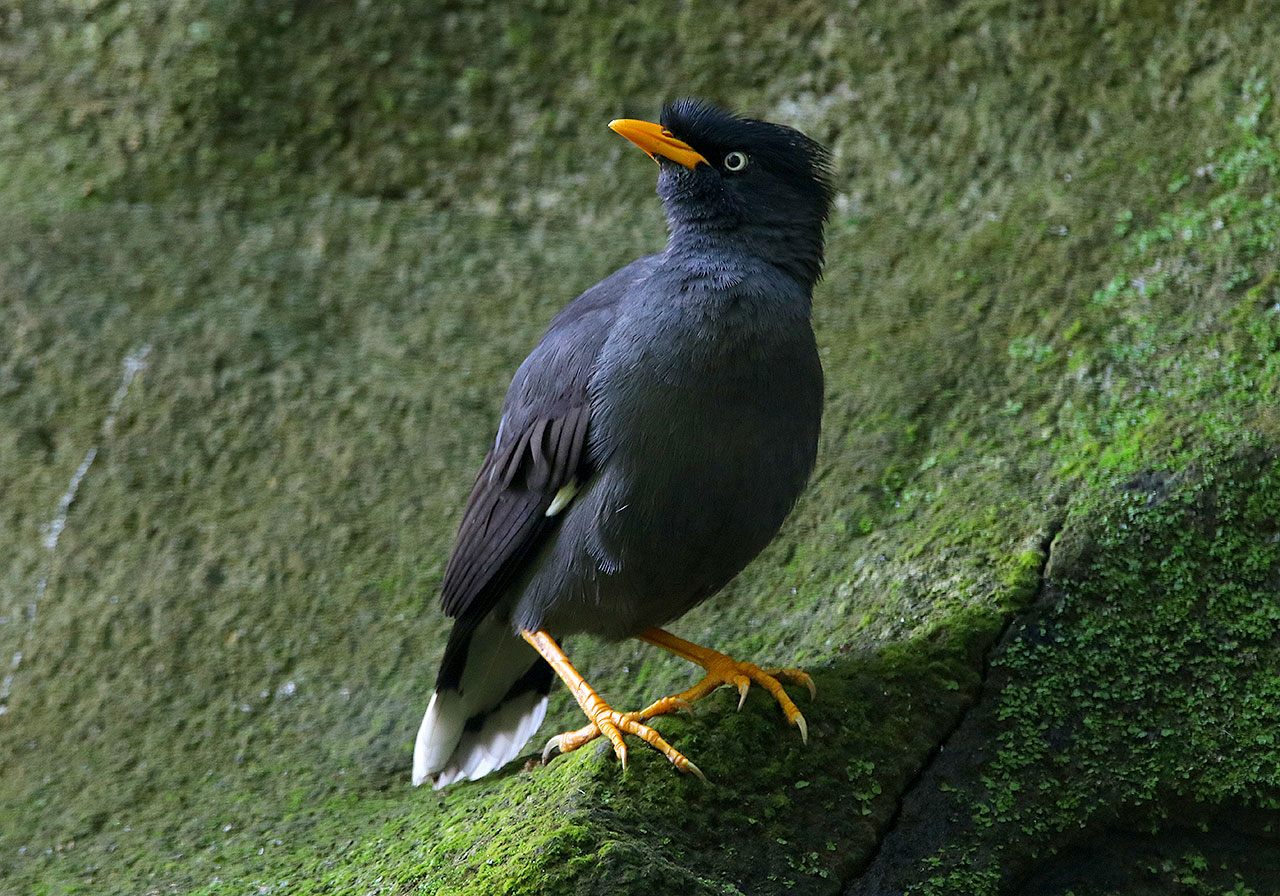 The Javan Myna were also very cooperative in captivity 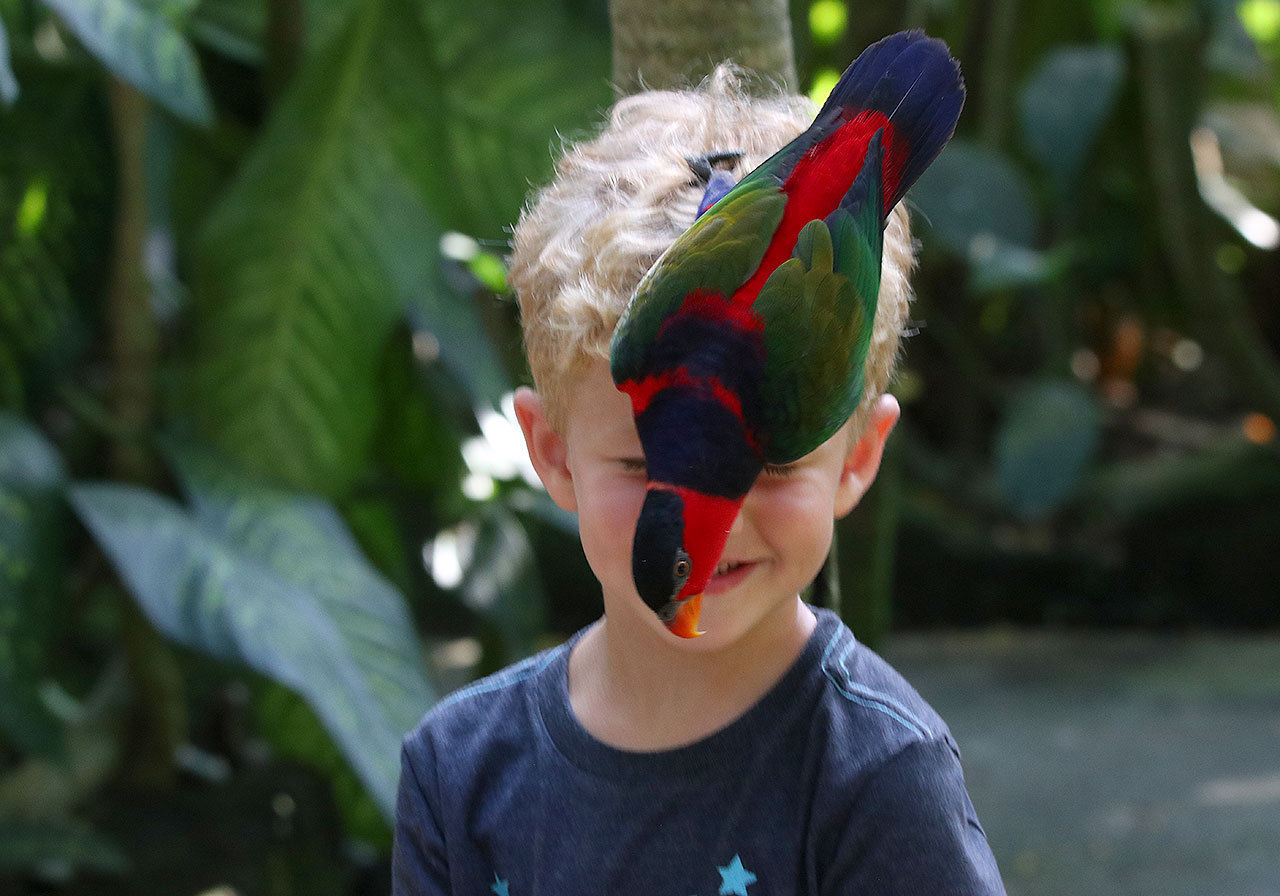 A Lorikeet taking a closer look at Cam

The rest of our day included a stop in Ubud to check out the Tengalalang Rice Terraces--Ubud is a tourist nightmare, and despite being the cultural center of the island, the sheer number of tourists detracted from the experience. 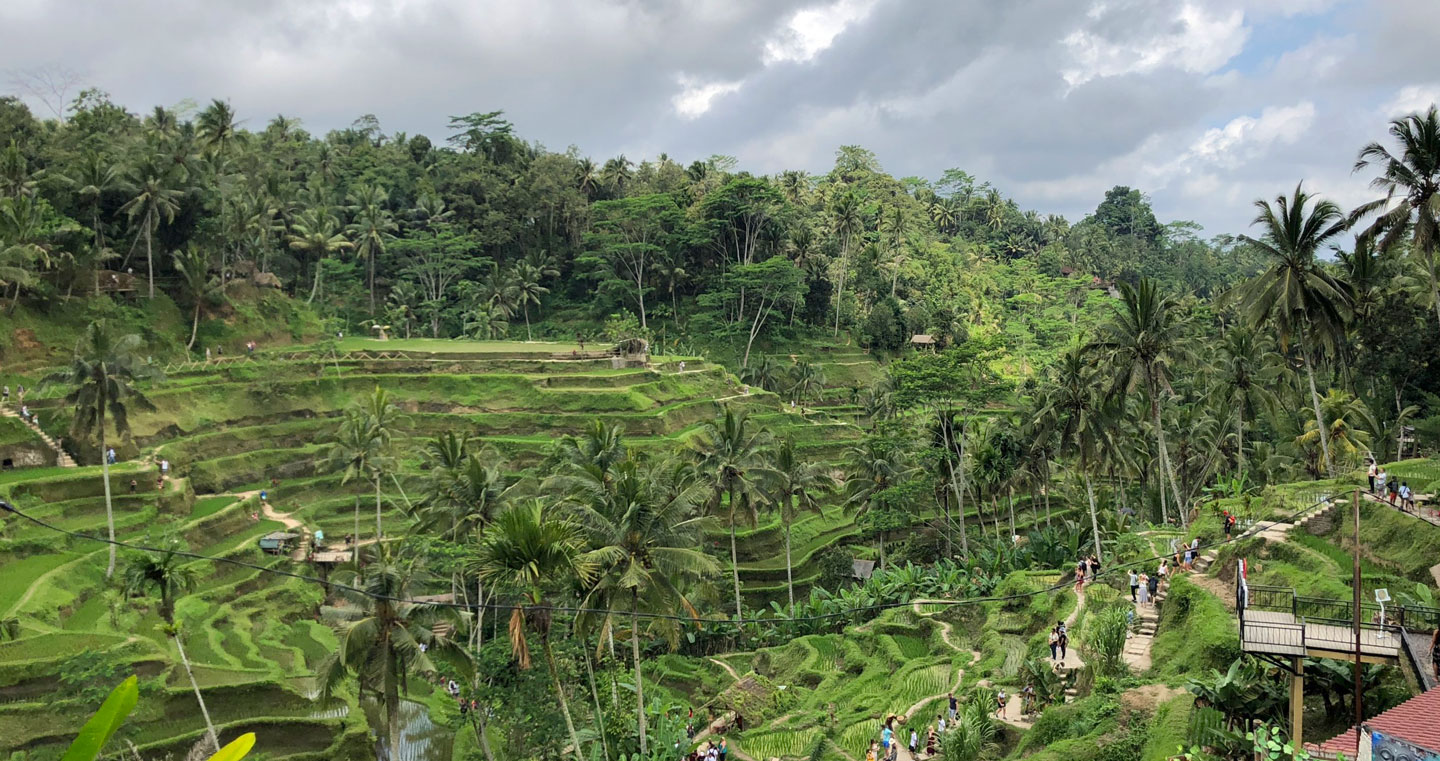 We ended up in the mountains north of Ubud in the village of Sebatu, at the Puri Sebatu Resort--which consists of around 10 villas situated on a mountainside with a view of a narrow valley, and when the skies are clear Mount Agung in the distance. We had one of the top villas with an incredible view--and we were surrounded by jungle. This was the "Bali Experience" with soul! 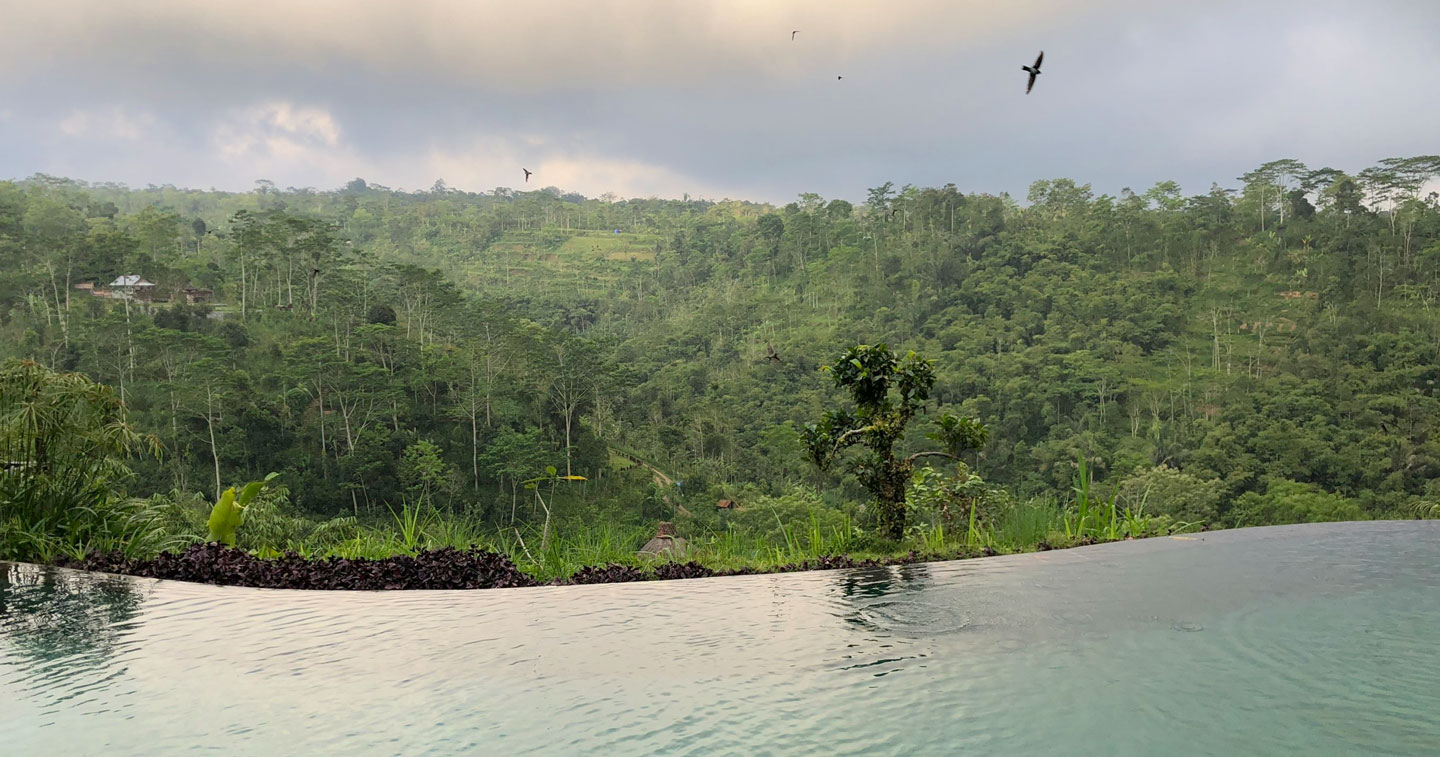 View from the pool at Puri Sebatu

It was late when we arrived and the only birds around were CAVE SWIFTLET, SPOTTED DOVE and the ever-present YELLOW-VENTED BULBUL. We settled in for the night and as it got dark I heard a croaking call form outside--I remembered listening to this sound before the trip and quickly grabbed my light and went outside--I looked up and right above our villa were 2 LARGE-TAILED NIGHTJARS perched in a palm tree. I went in and got my camera, but by the time I got the setup ready the birds had flown off. You could hear several calling from the surrounding jungle, but I couldn't track one down again. While I listened I heard another call from the darkness I had studied up on--it was a SUNDA SCOPS OWL! 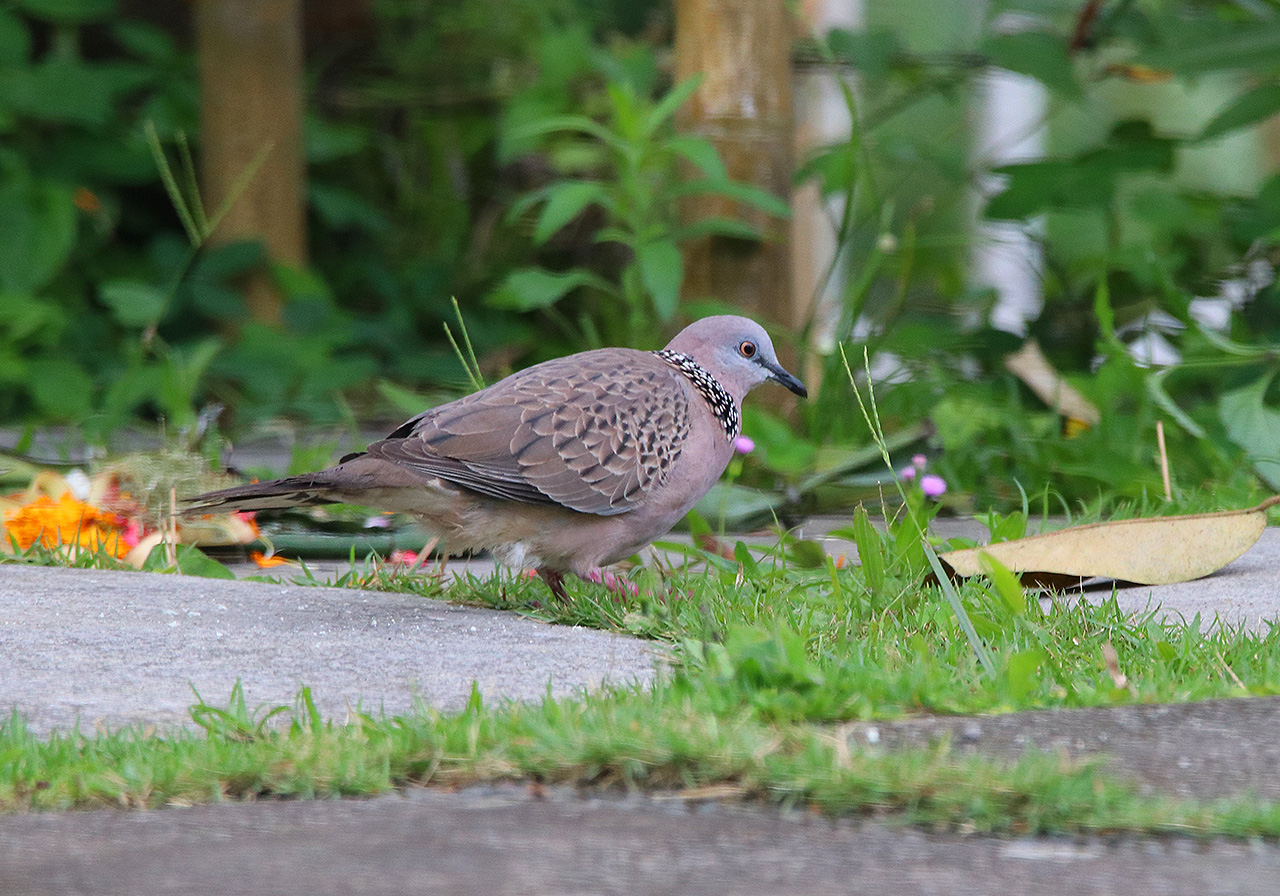 I tried to get the owl to come in, but it was of no use so I called it a night, happy with the audible. Shortly after midnight, I awoke to the sound of the SUNDA SCOPS-OWL calling close enough that I could hear it from inside. So again I ventured out in search. I figured it was just out of view, and despite trying for about 15 minutes I couldn't find it. The only plus was that while I was searching a JAVAN OWLET started calling. I switched gears to try and track it down, but the bird didn't seem to care. I finally went back to bed with another lifer but still no owl visuals... 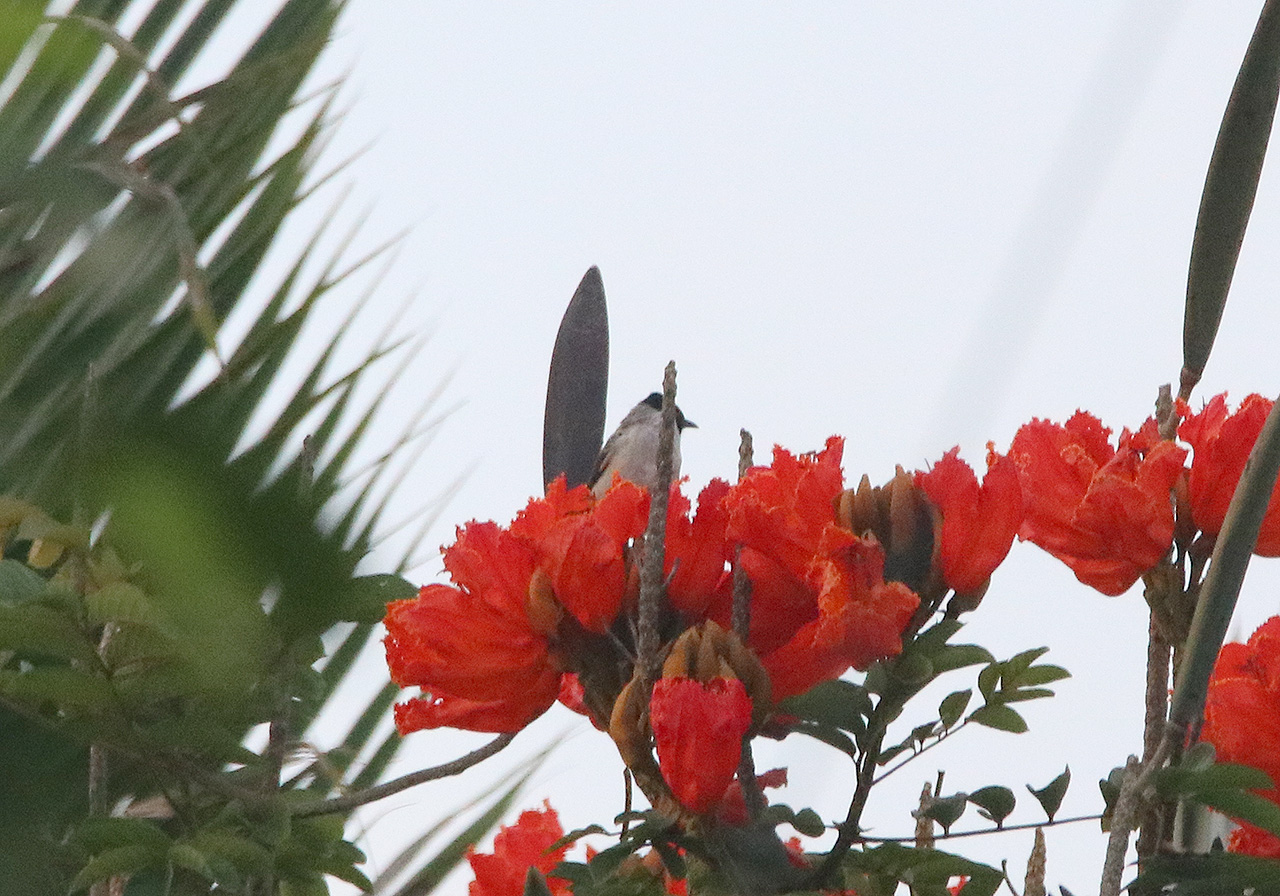 I was up after 6 wandering the property to see what I could track down. It quickly became apparent that I wasn't going to see much--but hear tons. There were birds singing and calling everywhere, but the only birds I was seeing were the bulbuls! I picked a flowering tree to watch for a bit and it turned up a few new birds. A single SOOTY-HEADED BULBUL was feeding with the more common Yellow-vented. As I watched, a flock of "blackbirds" flew in and landed--they appeared to be starlings, but I wasn't sure which kind. A quick glance in the book revealed they were a common species that often wander the jungle--SHORT-TAILED STARLING. 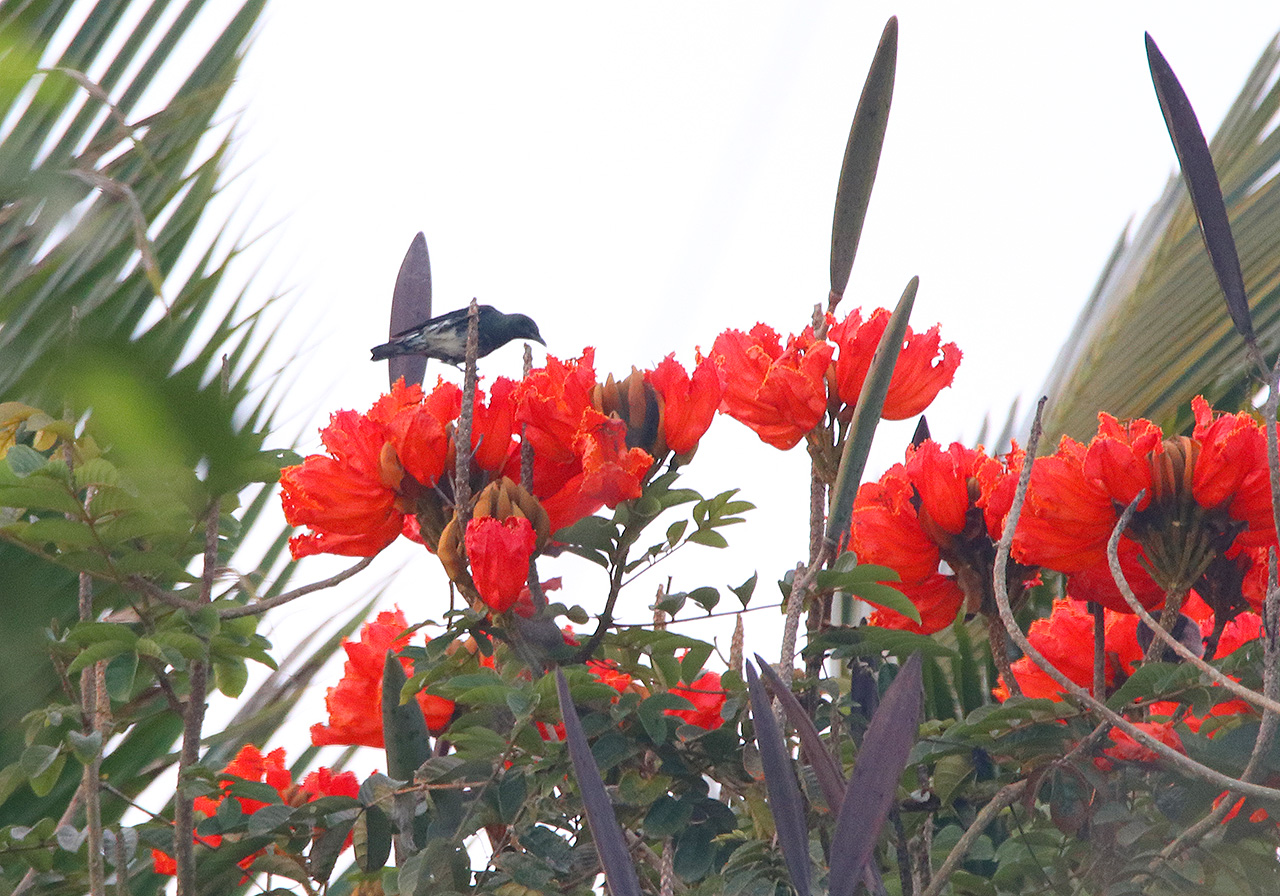 Eventually, I wandered back to our villa and sat on the deck watching the trees below. It became apparent this was the only way to really see birds here--wait patiently and let them come to you. I spotted an ASHY DRONGO in the distance feeding--it looked almost bluish in good lighting. 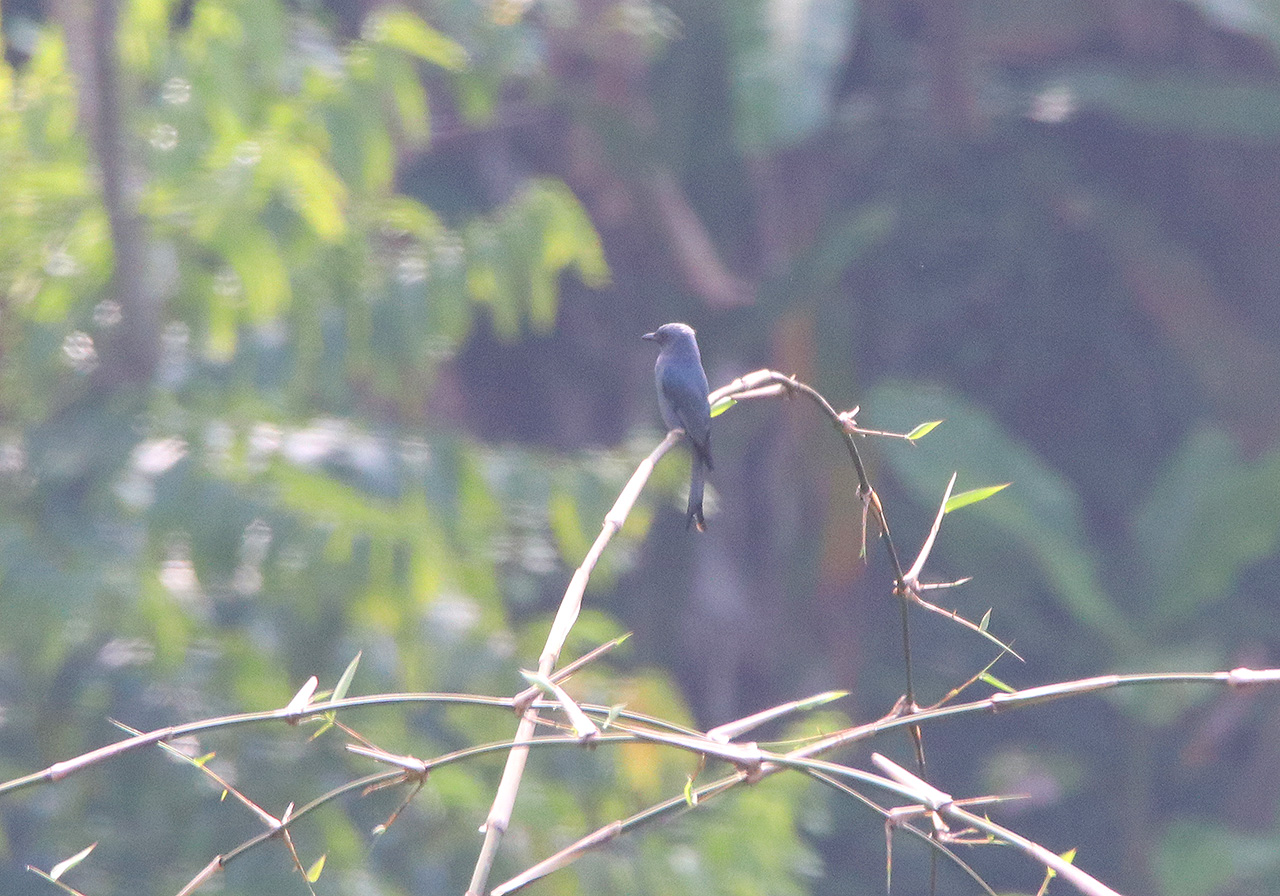 An Ashy Drongo looking bluish in the daylight

In the bamboo nearby I heard a chattering and soon spotted a wren-like bird. This one took me a minute to figure out, but it was a CRESCENT-CHESTED BABBLER. I'm guessing the individual I saw was a young bird lacking the prominent dark marking on the throat and chest the adults have. The shape of the bird also seemed off in the guidebook. Eventually googling it, I was able to see it was just not a great illustration. 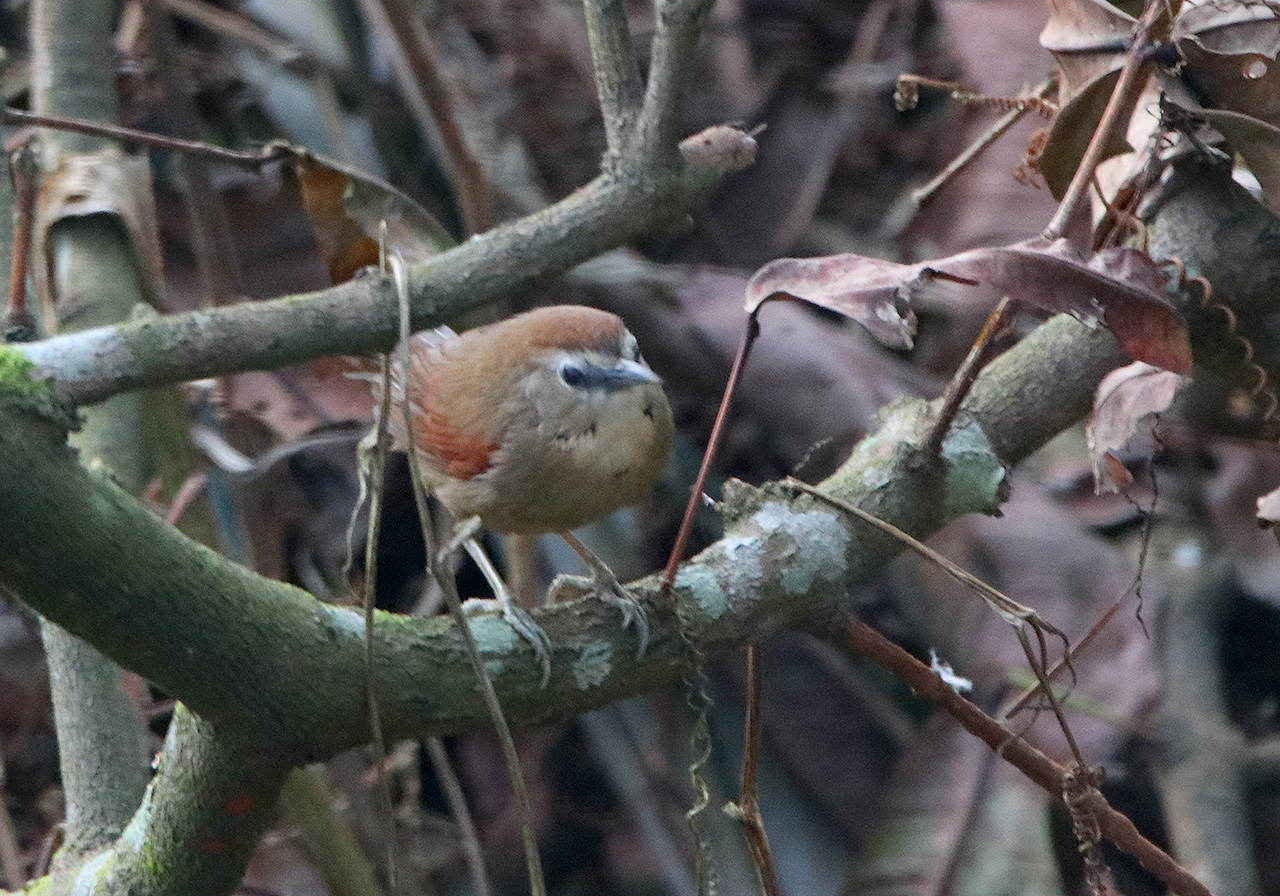 Crescent-chested Babbler were a constant at our villa

After the morning birding, we headed to Ubud to visit the Ubud Monkey Forest. Here, more than 700 Crab-eating Macaque reside, and more than 100,000 tourists visit monthly to see them. While it was cool seeing all the monkeys, the sheer number of people and the inability of said people to follow rules, be respectful of the monkeys, or do basic things like use garbage cans made it quite annoying. Dropping your water bottle for a monkey to "play with" is just a shite thing to do. It's not amusing--its super disrespectful, and really bothers me. 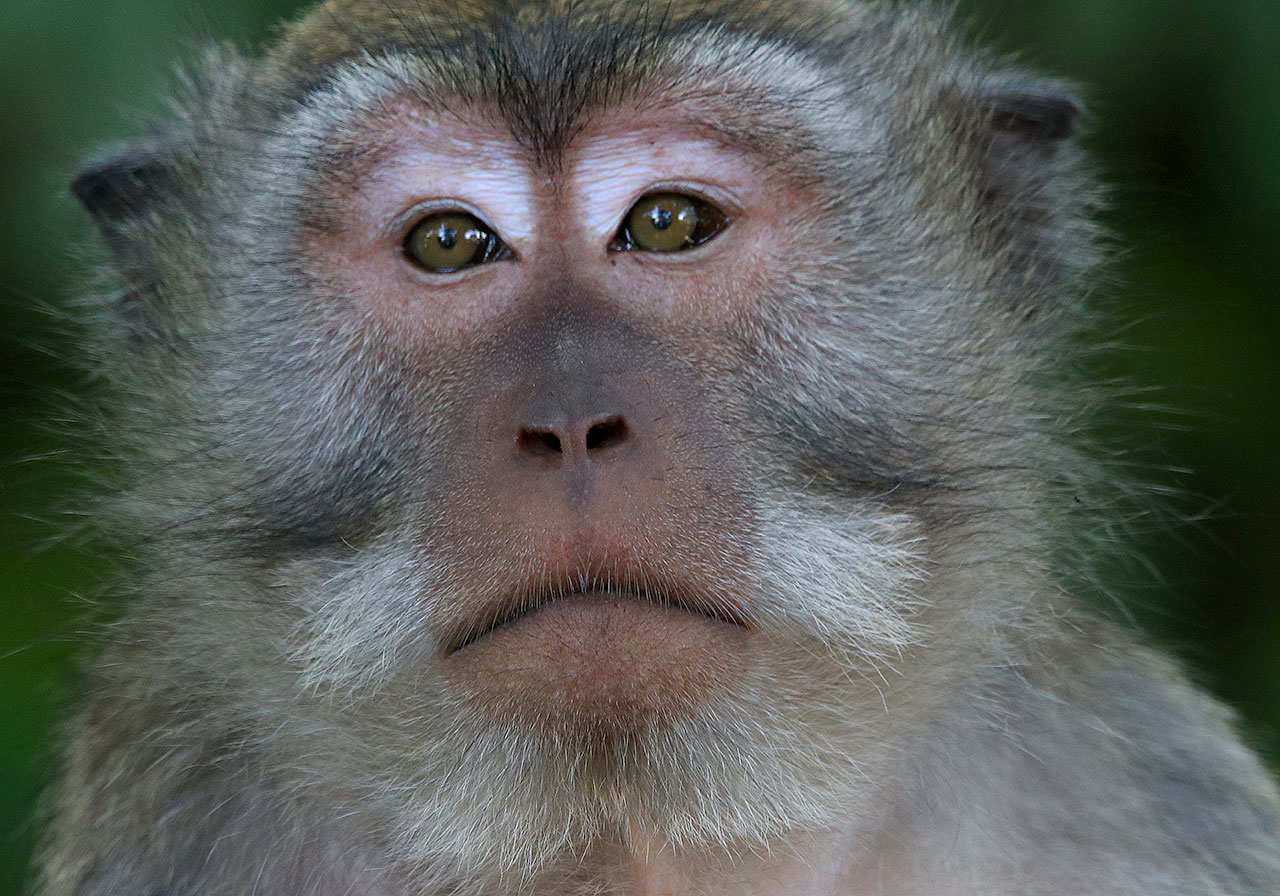 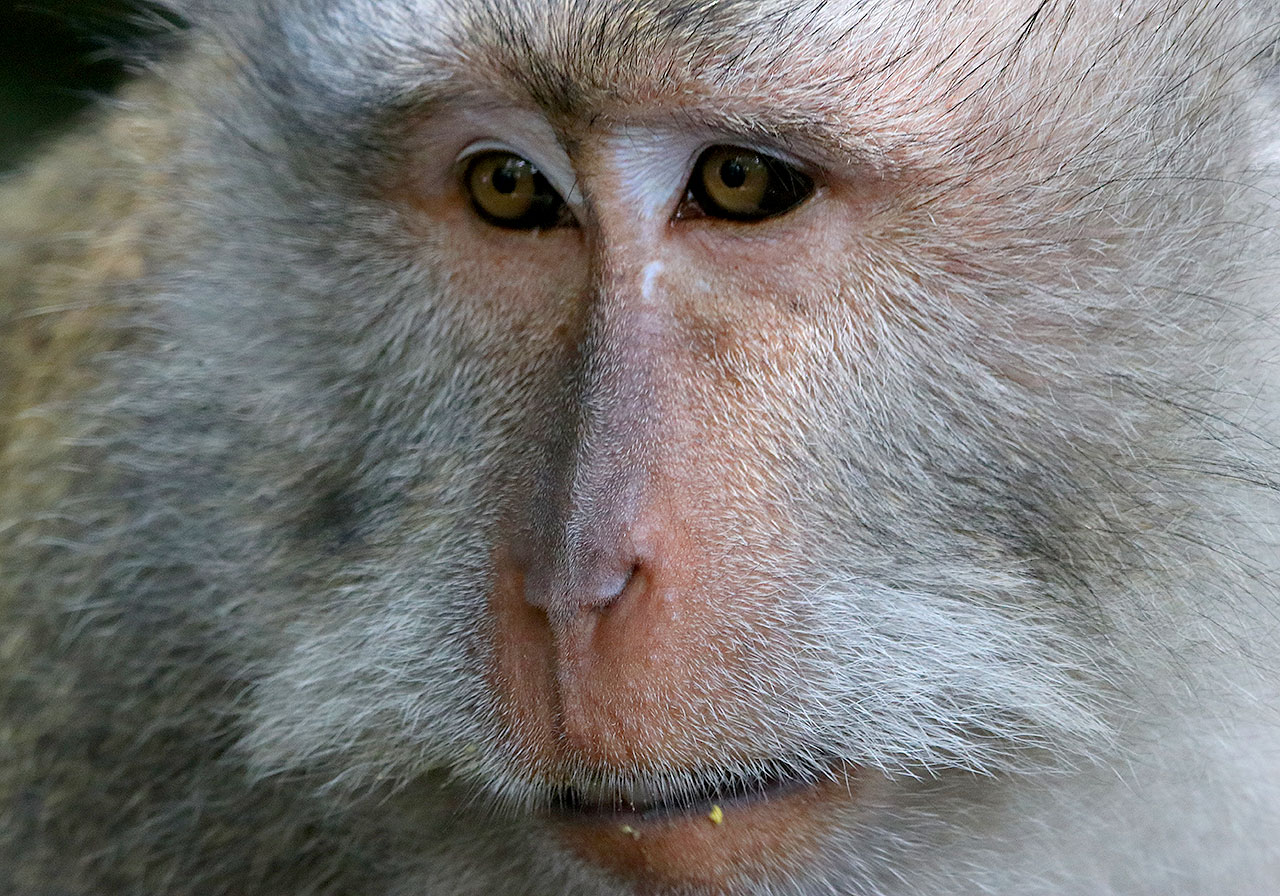 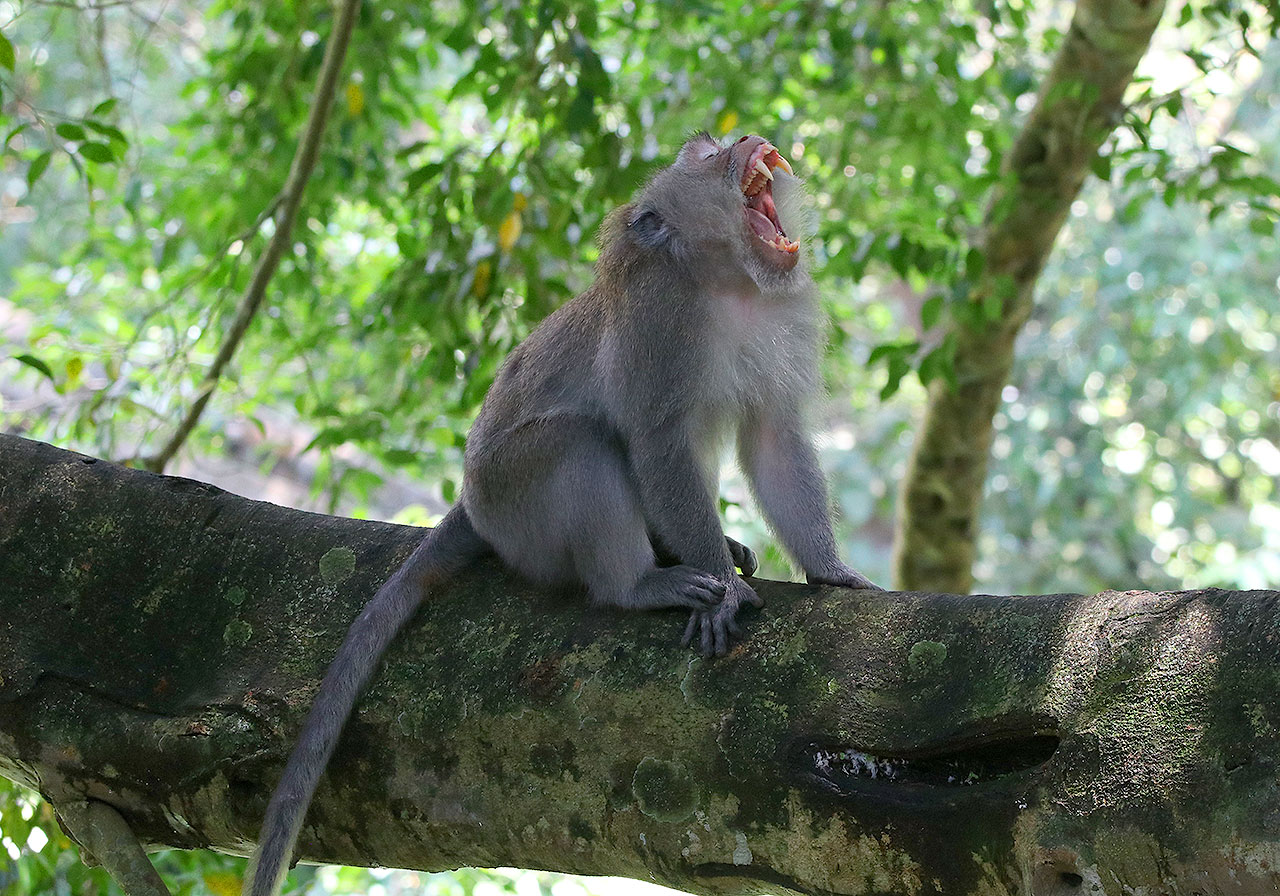 I had more than enough of my fill in Ubud with a few hours. Way too many tourists for me to enjoy. We headed back to Sebatu in the afternoon and after dark, I went outside to see if I could get lucky with a nightjar. I was just lucky enough as almost immediately a LARGE-TAILED NIGHTJAR landed back in the same tree--only mostly obscured by palm fronds. But it was a photo! 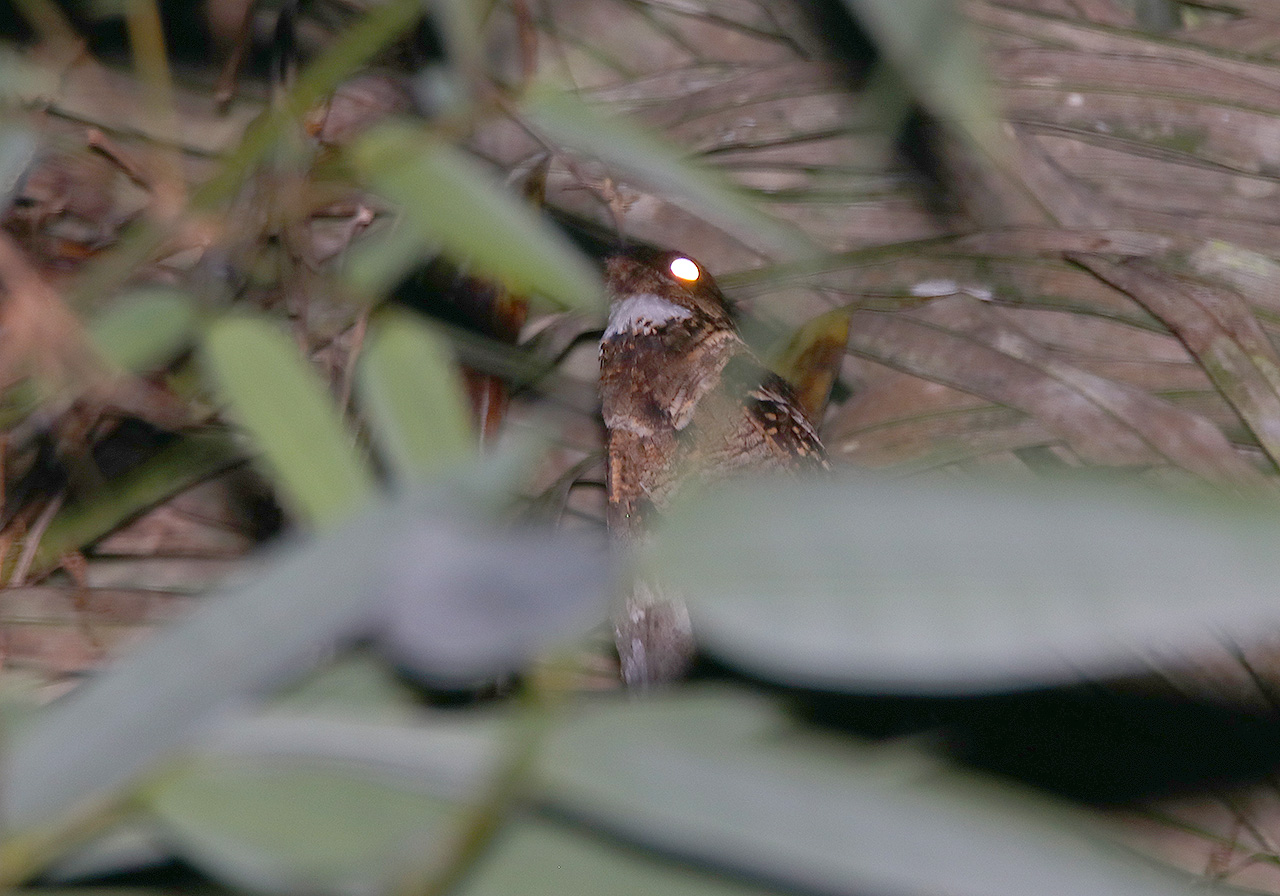 Large-tailed Nightjar concealing itself in a palm tree

I tried for Scops-Owl again without any luck--several were calling but none responsive. I went to bed but had a plan. Before heading to Indonesia, I had read several reports that mentioned early morning owling had been more successful than evening owling--so I opted to try early. I woke at 5:00 am and headed out into the forest--I immediately heard a close calling SUNDA SCOPS-OWL. I found a dark spot to stand and played the call. The birds swooped down and landed on an open branch right above me. I shined my light on it, and saw the gorgeous cream-colored owl!

I pulled my camera up to take a picture and realized I couldn't focus. I hadn't really tested out the photo setup with the travel Iight I brought, and it wasn't powerful enough for the camera to focus. The bird flew away but I saw where it landed and quickly took an out of focus record shot just to have. The bird then disappeared into the canopy. I missed my photo op...

But--you've seen the image that starts this blog post--so you know I ended up getting lucky and eventually tracking down another. I spent the next hour trying in several spots for another but nothing was working. I ended up back at our villa sitting on the rock wall by the front door trying to figure out the best way to take a picture with my new setup. I decided to play the scops-owl call one more time. I did and nothing happened. After a couple minutes, I started to get up when I heard a purring above me. There, in a small tree right next to our villa was the owl--I don't know how long it had been there, but it was so close it barely fit in the lens. I took a picture--it came out pitch black! The flash was off center. I got it set and took another shot--this one was tack sharp! 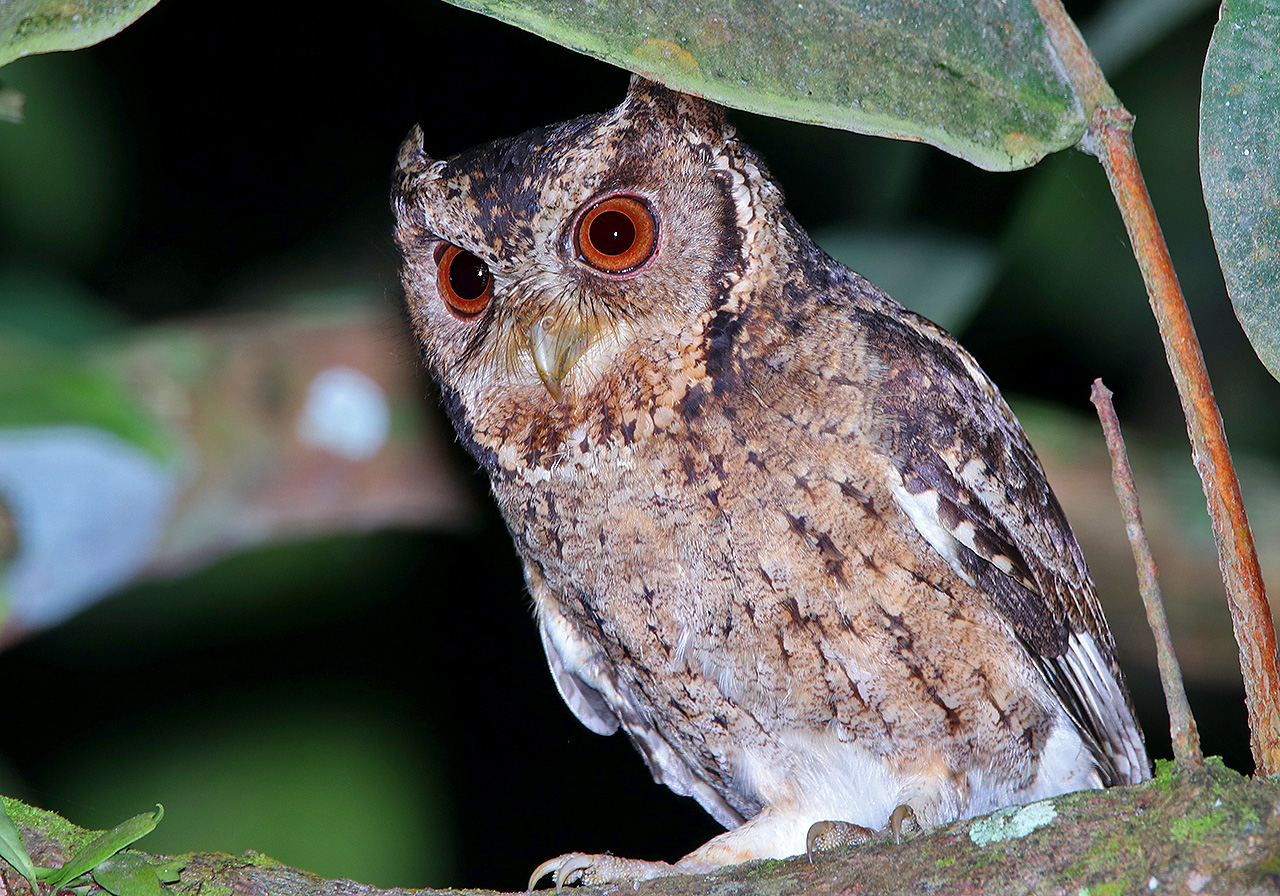 I'd hoped to get it looking right at me, but it took off before giving me that look. Later I found that I had gotten him with one of the shots with the flash off center, but it was a grainy mess. 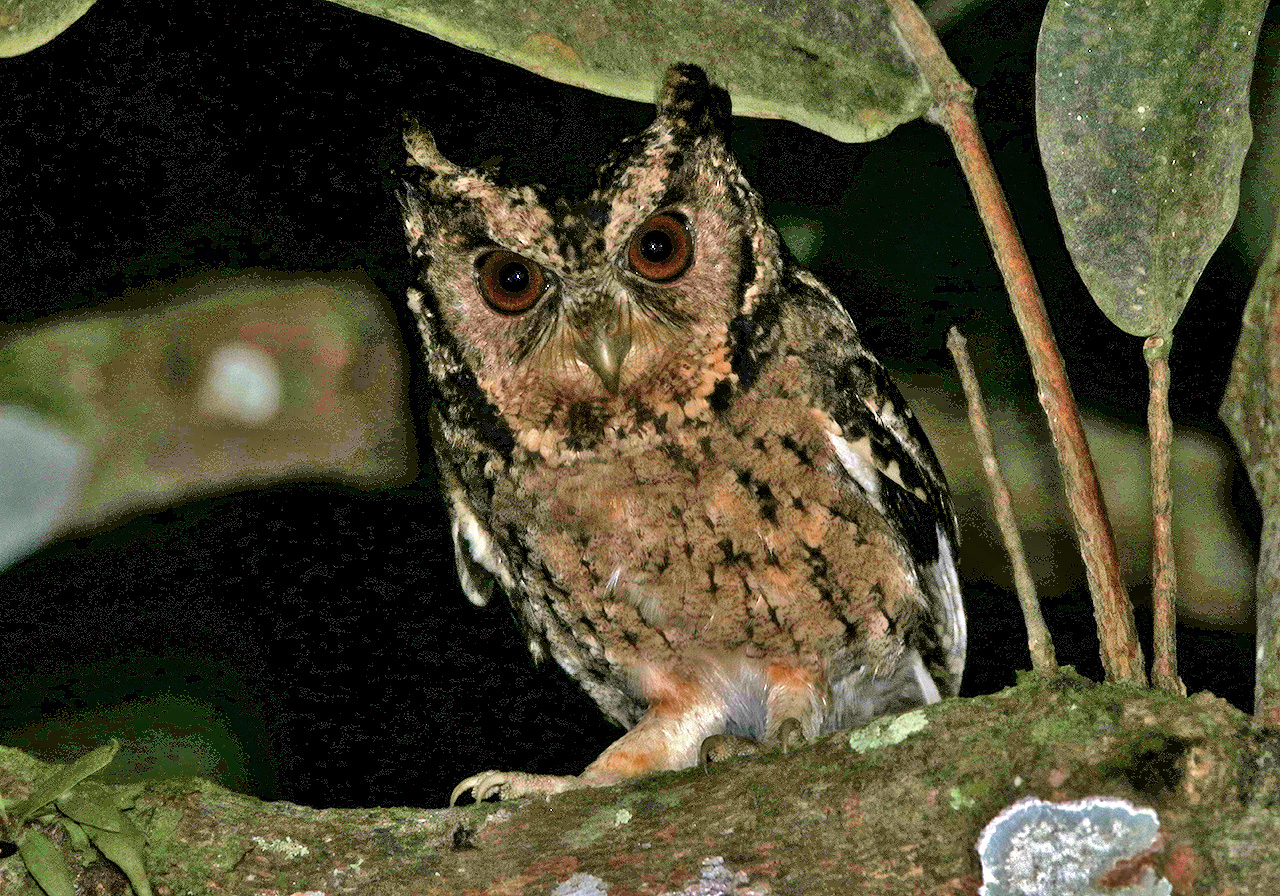 The shot that "could have been" of the Sunda Scops-Owl

In any event getting a shot was a win for me, so I was ecstatic. I spent the next hour wandering the grounds looking for more birds, and finally found a cooperative enough JAVAN MUNIA for a photo. I had seen one the day before like 10' away but didn't have my camera. 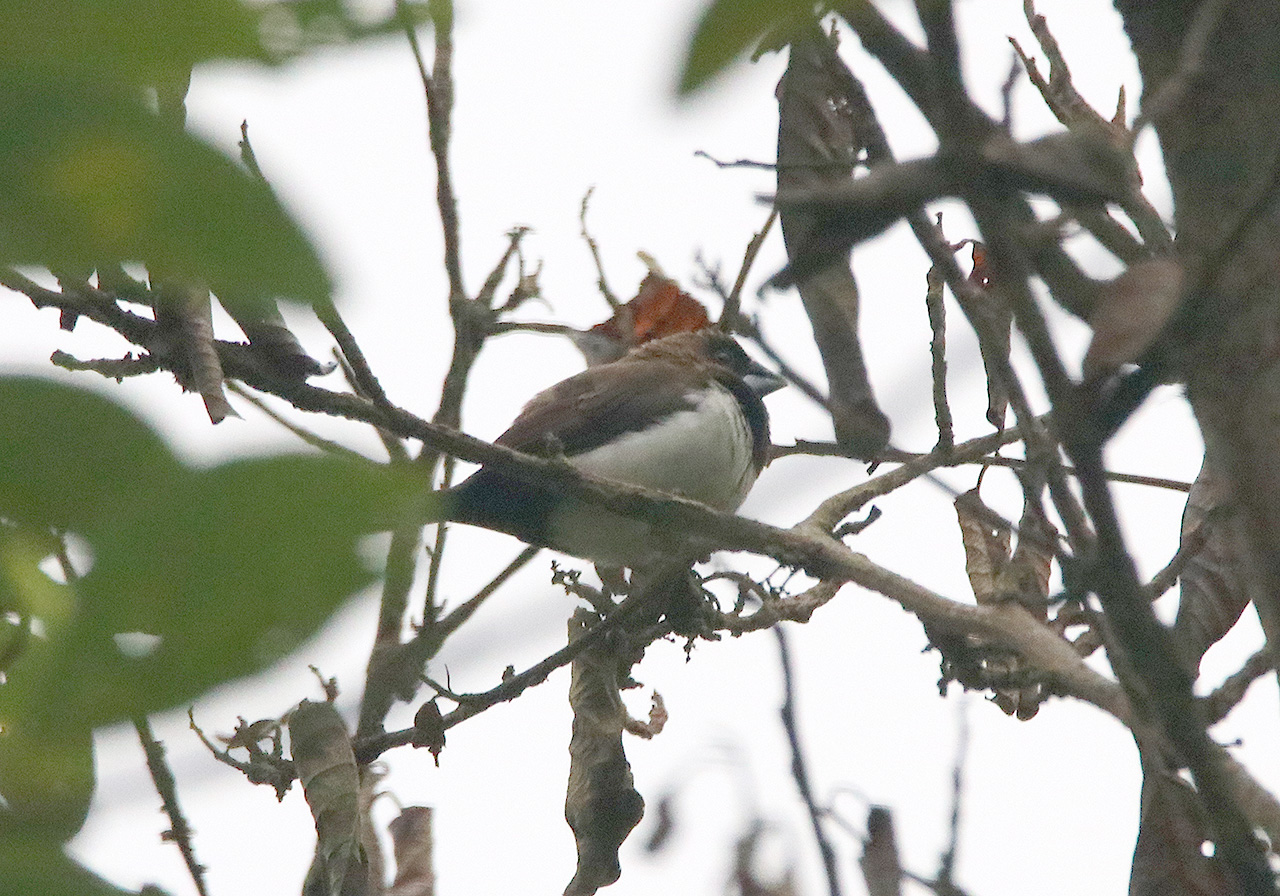 We had a couple hours before our driver would arrive to take us west across the island to West Bali National Park, so I spent it sitting on our deck waiting for birds to emerge from the forest. One bird that I heard constantly but hadn't seen yet was a LINEATED BARBET. They were calling everywhere. The waiting game worked as the barbets made their way into the open. I found that if I was moving they held still--but if I held still they moved. 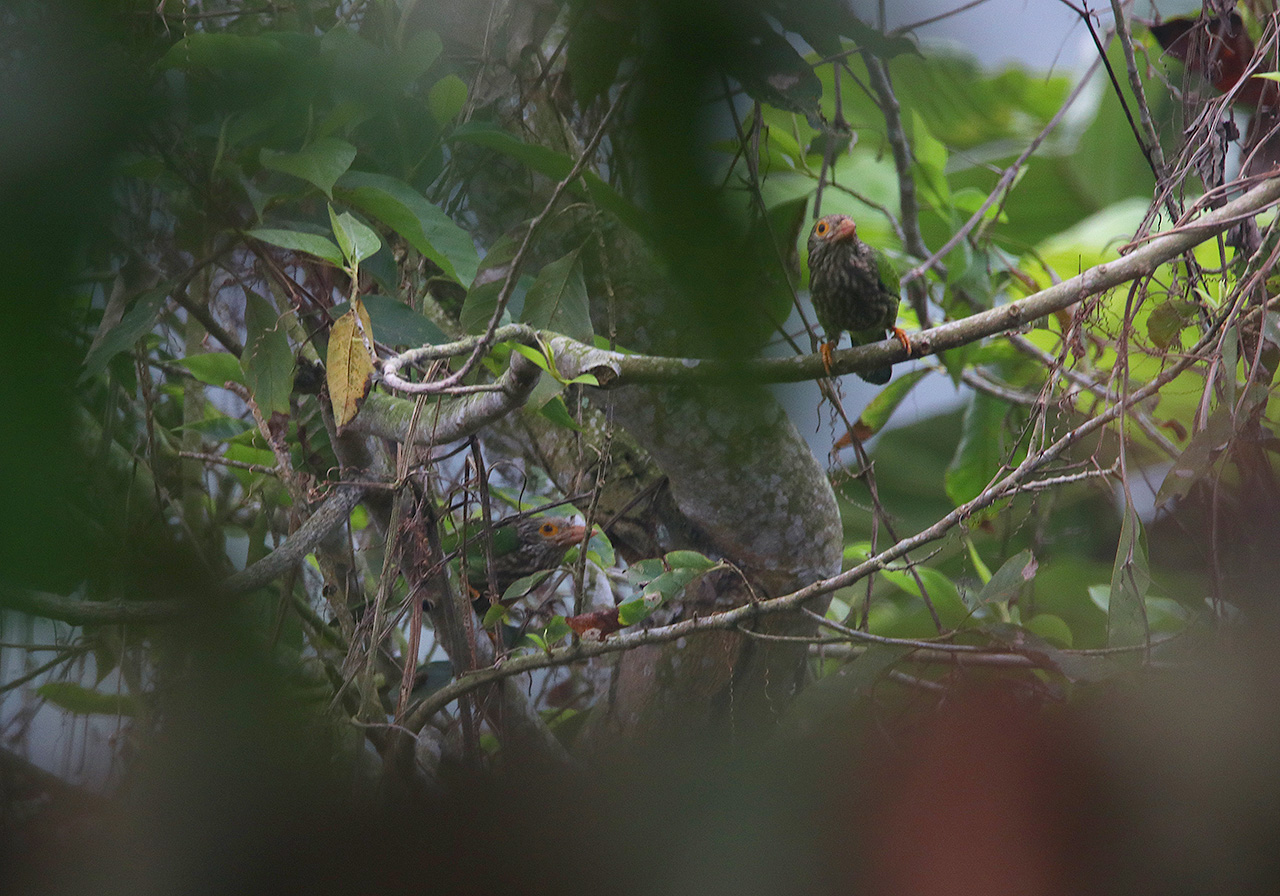 A pair of Lineated Barbet peering through the jungle 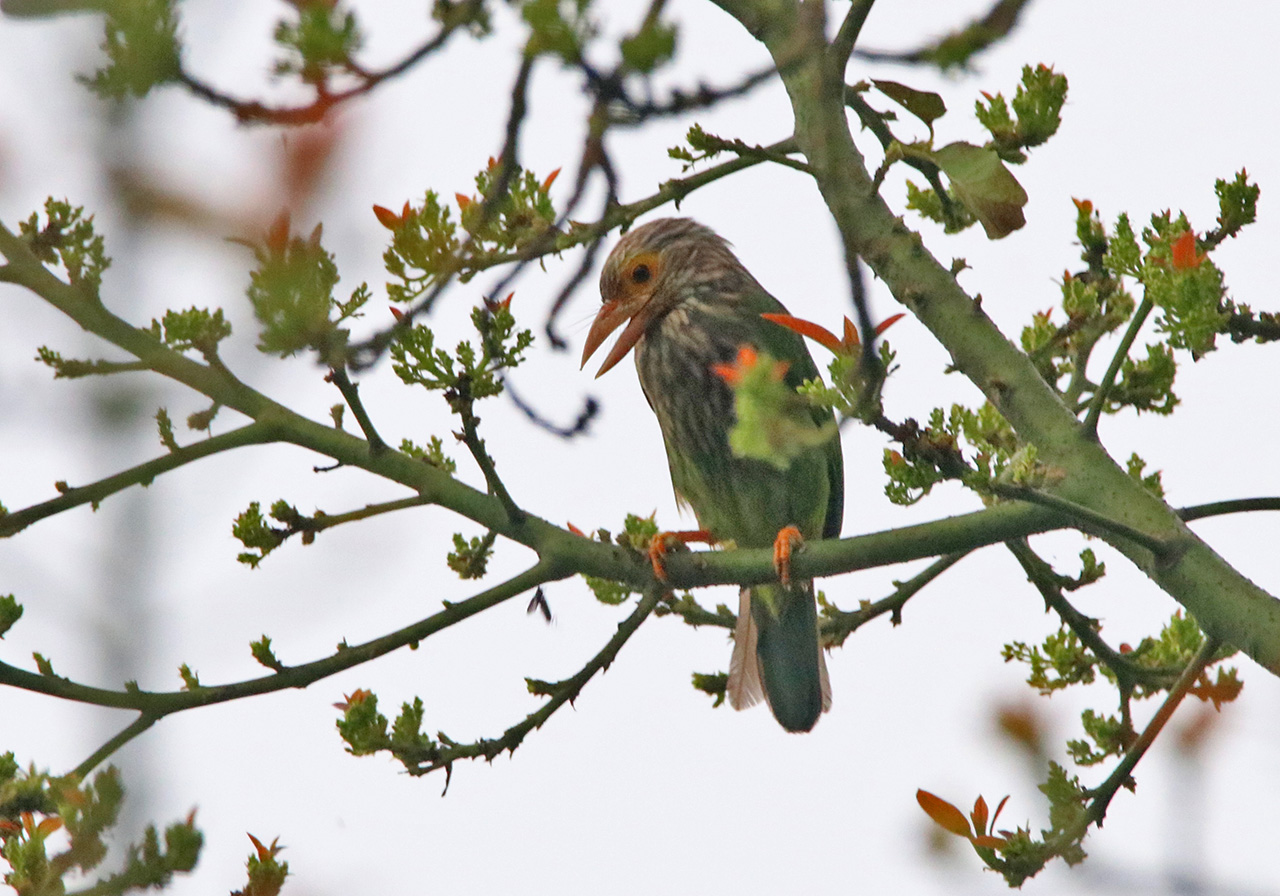 Their constant and repetitious call might drive a non-birder nuts, but I enjoyed the sound. I kept watching and waiting when a GREATER COUCAL flew over and landed in a tree overhead. I had seen numerous individuals of this species the previous week in Hong Kong but this was my first in Bali. 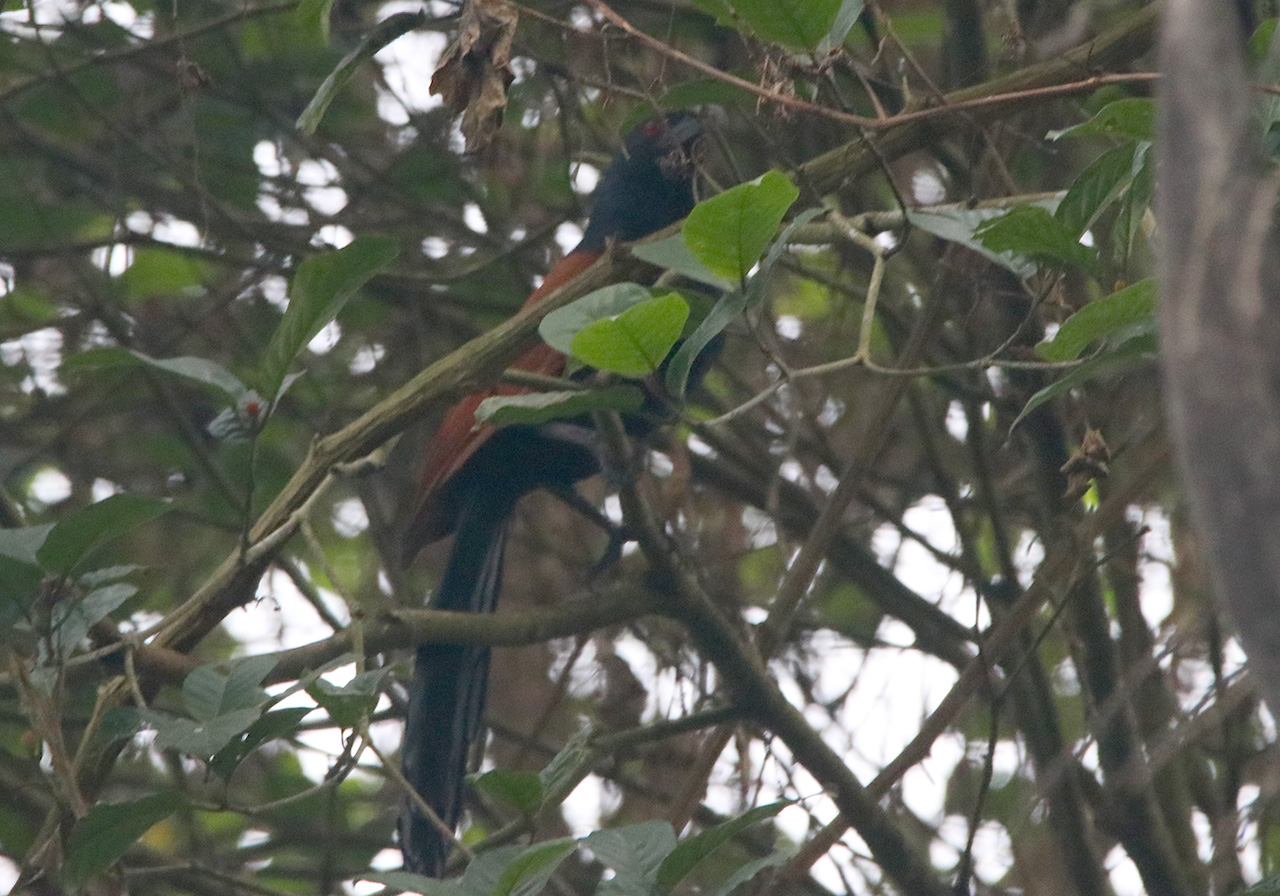 Greater Coucal moving through the trees

I spotted a small yellow and gray bird working its way through a tangle downhill from where I was sitting--I had no idea what it was. I figured it may be some type of warbler, but couldn't find anything that matched. On a whim I flipped the guide to the white-eyed pages and lo-and-behold I found the culprit--and its name is a mouthful: JAVAN GRAY-THROATED WHITE-EYE. 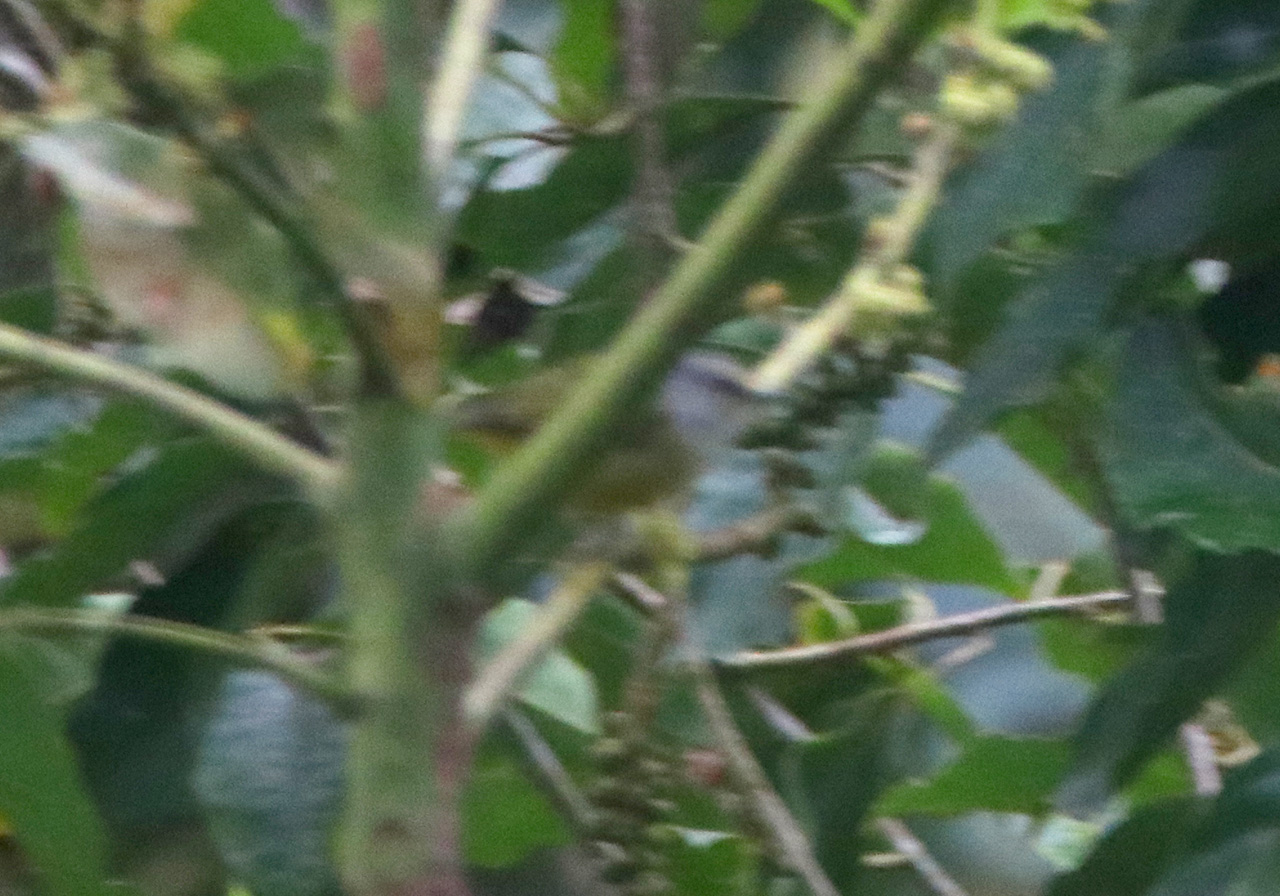 The most incredible shot of a Javan Gray-throated White-eye

Time was starting to dwindle and I was going to have to finish packing up for the drive. I did one last scan then stood up to walk inside when I caught a glimpse of movement below. On a small snag was a bird that would pass for an Empidonax flycatcher here in the states--but in Bali it was most definitely a jungle-flycatcher--and this was an obvious one, and another mouthful, the FULVOUS-CHESTED JUNGLE-FLYCATCHER. 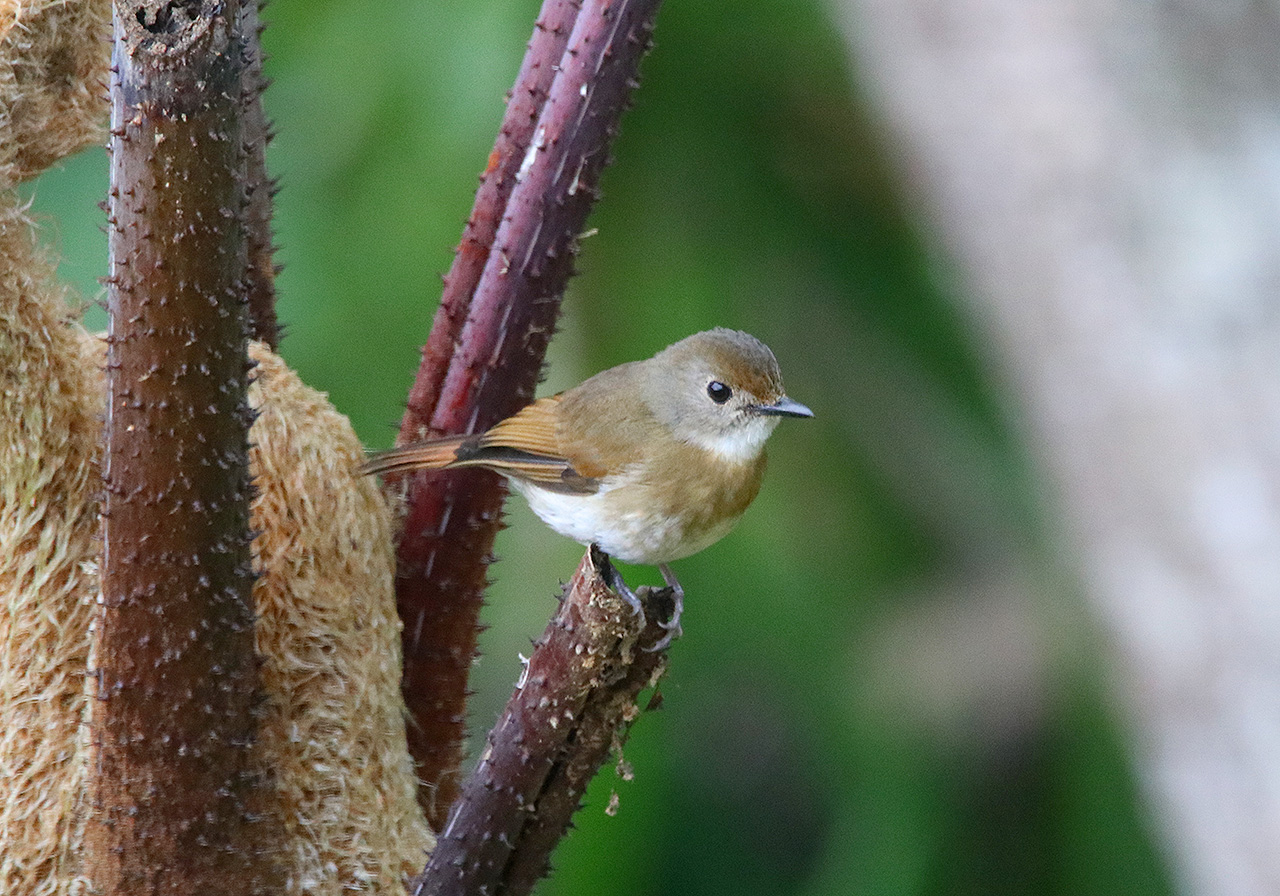 It would be the only one I saw during my 2 weeks on the islands, so it was a great way to end my stay at Puri Sebatu.

One last view from the room before we left...

A knock on our door was the sign that it was time to go. We met our driver and set off across the island for West Bali. I would have loved an entire week in the rainforest and highlands in the central part of the island, but we just didn't have enough time.

We made our way over the mountains, past rice paddies, lakes, fields, different types of forests, and I wondered what birds did I miss? Too many to dwell on, but it gives me something to come back for. 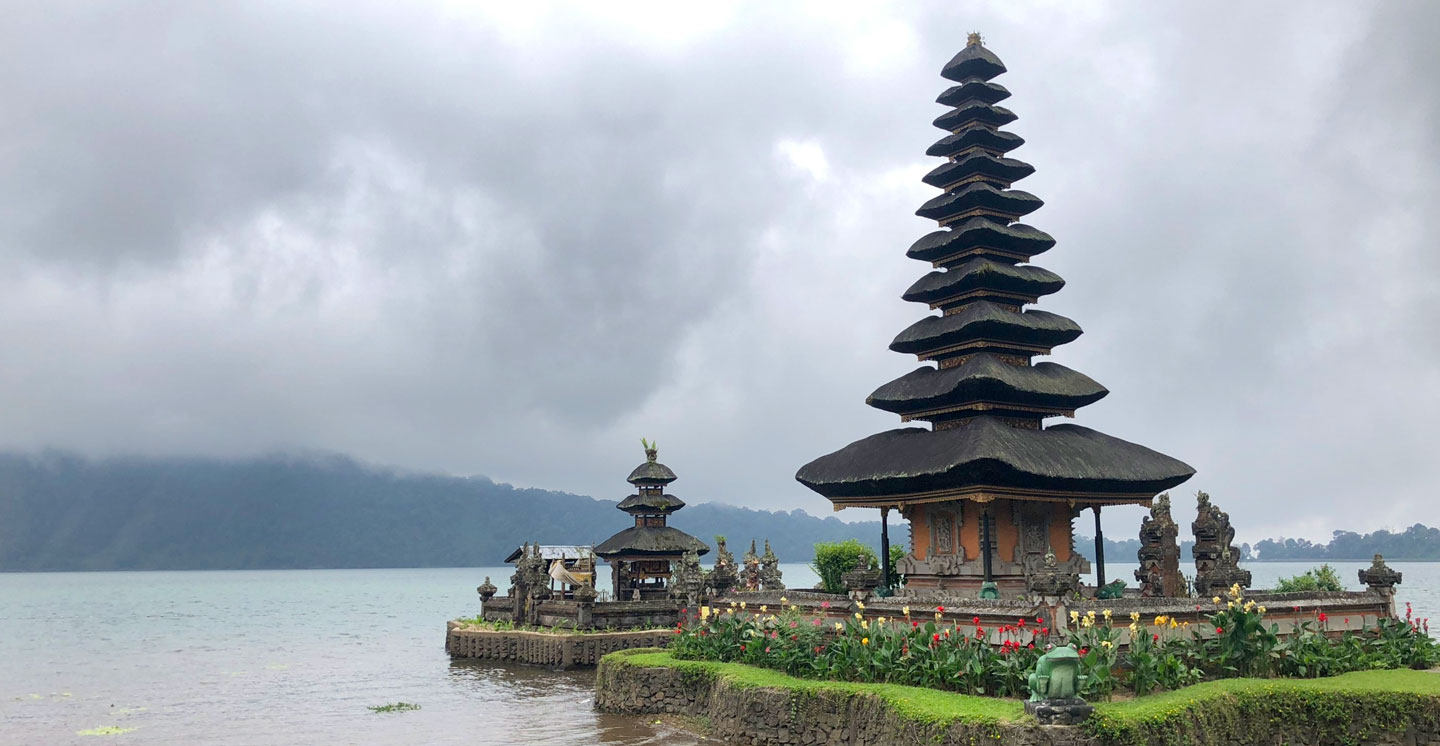 The drive was only 86 miles, but on the winding mountain roads of the inner island, it took almost 4 hours to get to The Menjangan resort--situated in the national park in the monsoon forest. It was night and day different from the middle of the island where everything was wet and covered in rainforest. Here the ground was dry, many of the trees had no leaves at the end of the Austral winter--it felt more like South African Savannah than Indonesian Jungle!

The following day I would meet Hery Kusumanegara, local bird expert and guide who would show me the best of what West Bali National Park had to offer. It would perhaps be one of the greatest days of tropical birding I've ever had...