I woke up and was congested. What a brilliant start this would be to 3 nights on cruise ship followed by a couple days in Canada. I slugged some Day Quil, grabbed my gear and was off to the airport. I took an early flight so I could spend 1/2 the day birding around Orange County, and met my buddy Dorian Anderson at baggage claim once on the ground. We kept the plans fluid and had hoped to chase a Nazca Booby that had been about 40 minutes south two days earlier--but with the bird being a no-show the previous day we stuck closer to the airport. After an hour at Huntington Park East, Chris Monahan met us and we birded Bolsa Chica and Mile Square Park before dropping off the rental and UBERing to the cruise port. 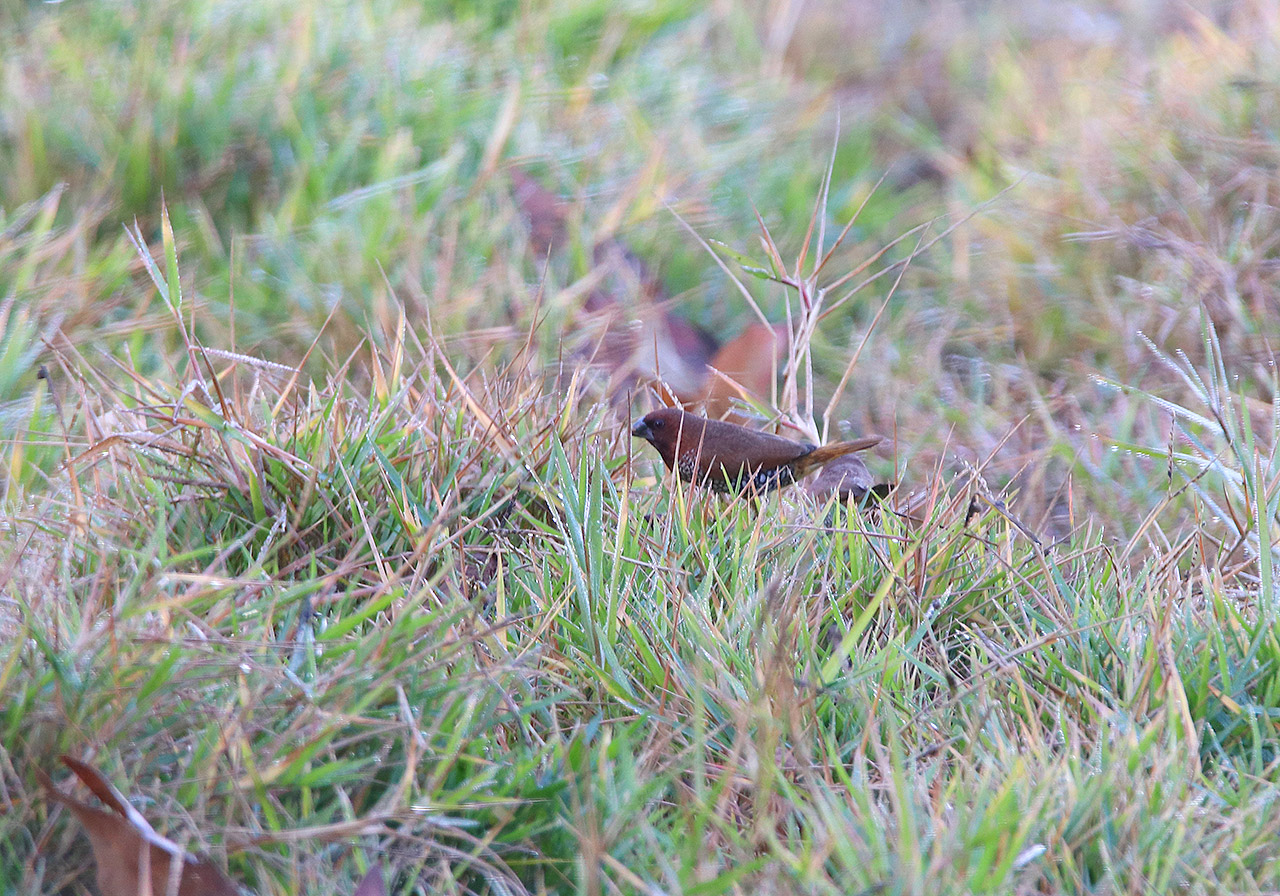 One of a handful of Scaly-breasted Munia in the grass

Huntington Park had it's usual suspects, with a decent sized flock of SCALY-BREASTED MUNIA eliciting a few clicks of the shutter from me. A wayward WHITE-FACED IBIS also posed for some nice shots along the edge of the currently flooded pond basin. 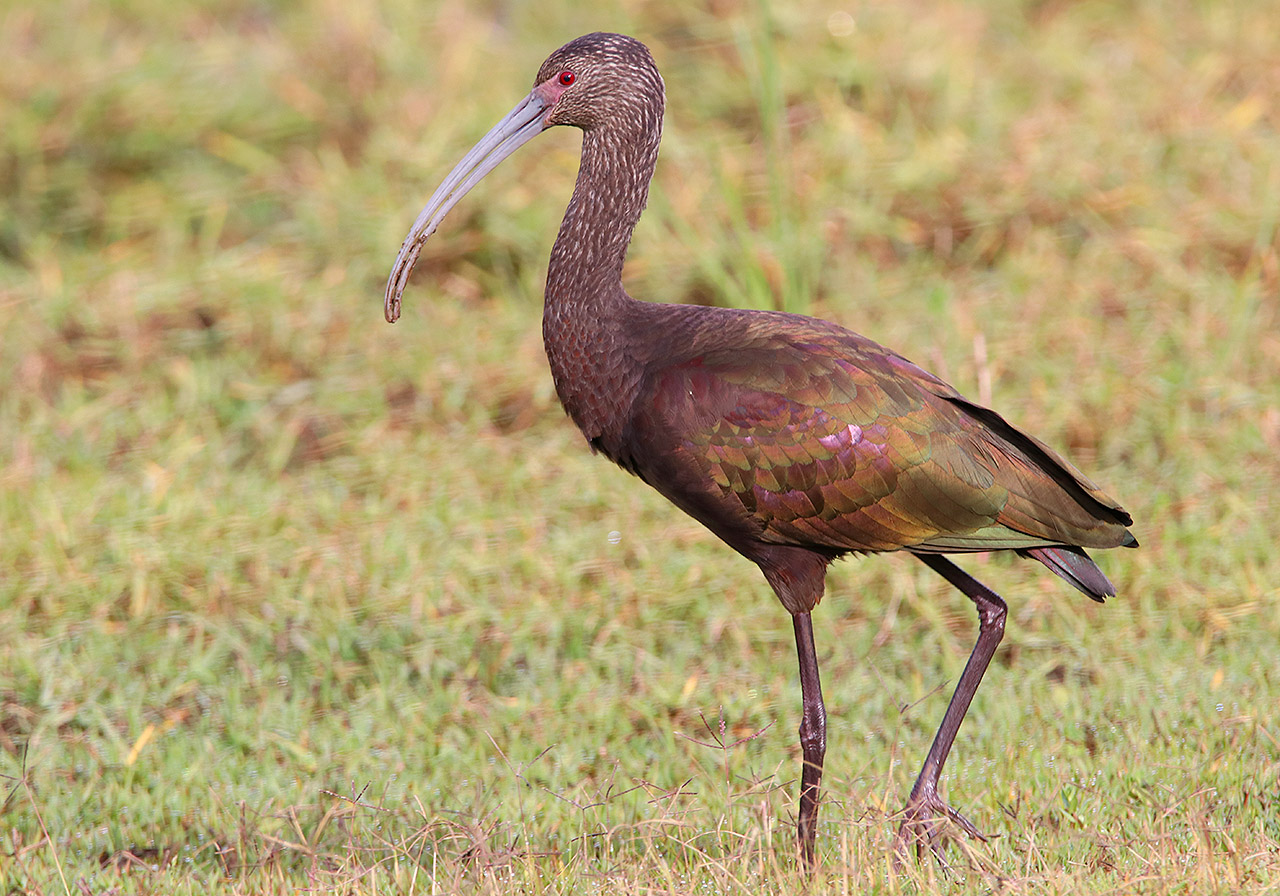 Overlooking Bolsa Chica from Harriett M. Wieder Regional Park I snagged a pair of FOX SPARROW, a new California bird for me. From the 101 we walked across the boardwalk into the main impoundments at Bolsa Chica. Birding was phenomenal as usual. We picked up 55 species in under 45 minutes, including a wayward REDDISH EGRET, several RUDDY TURNSTONE, a MERLIN, and a couple HORNED GREBES. 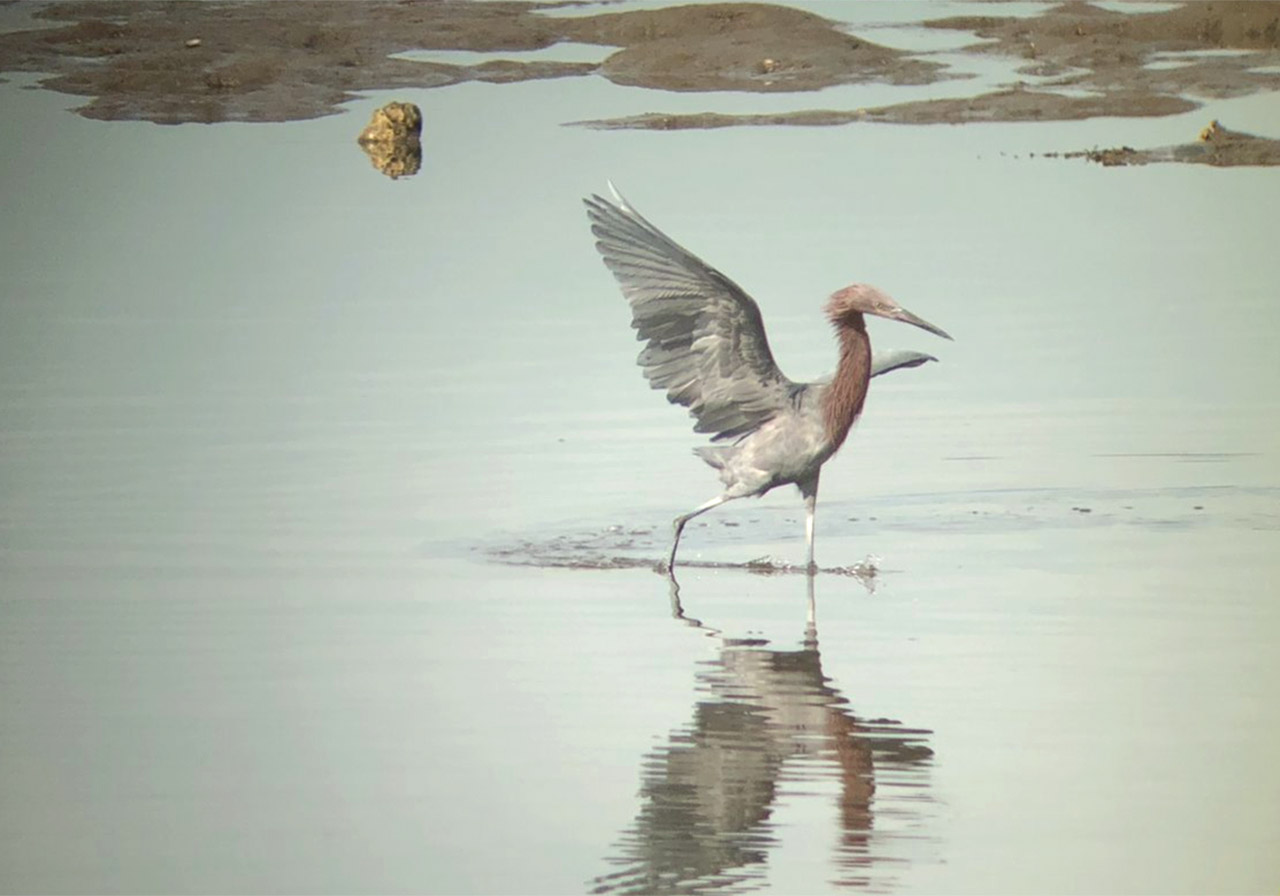 We decided we could fit some time in at Mile Square Park and headed that way. The ponds were rather dead, so we hit the botanical garden/"wild" area in the middle of the park. A couple VERMILION FLYCATCHER were here as well as a lost GRAY FLYCATCHER and on the golf course, a SNOW GOOSE joined a flock of Canada Geese. With a few new state birds in tow, we grabbed lunch nearby at Sabrosada (great Carne Asada Fries), then headed to the port. 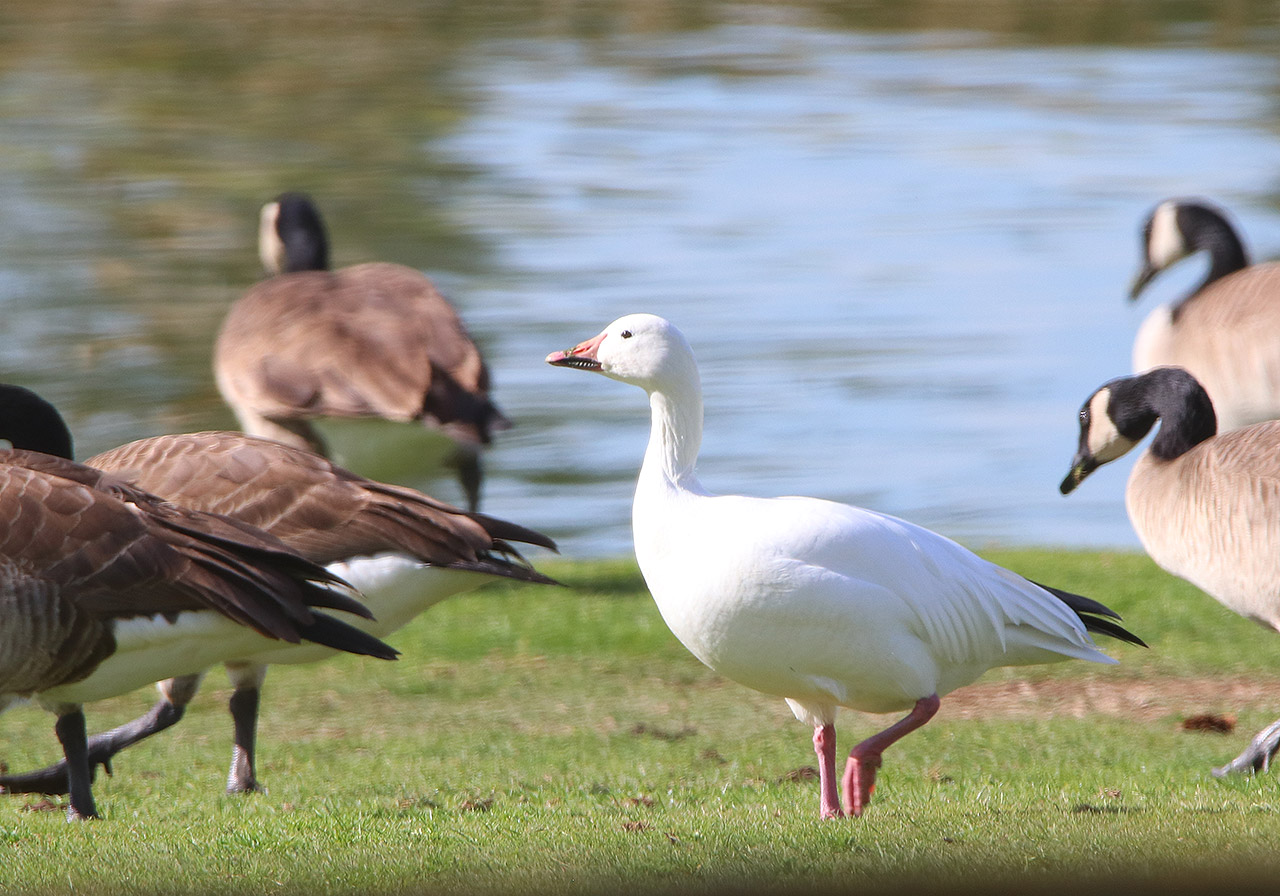 Snow Goose standing out in the crowd

Being my first cruise everything I had been told was conjecture. I didn't know what to expect and to be honest, the boarding process wasn't as bad as I imagined. We were on the ship in under an hour and found our room. It was small as expected, but we splurged the extra $40/person for the balcony, so we had some fresh air. 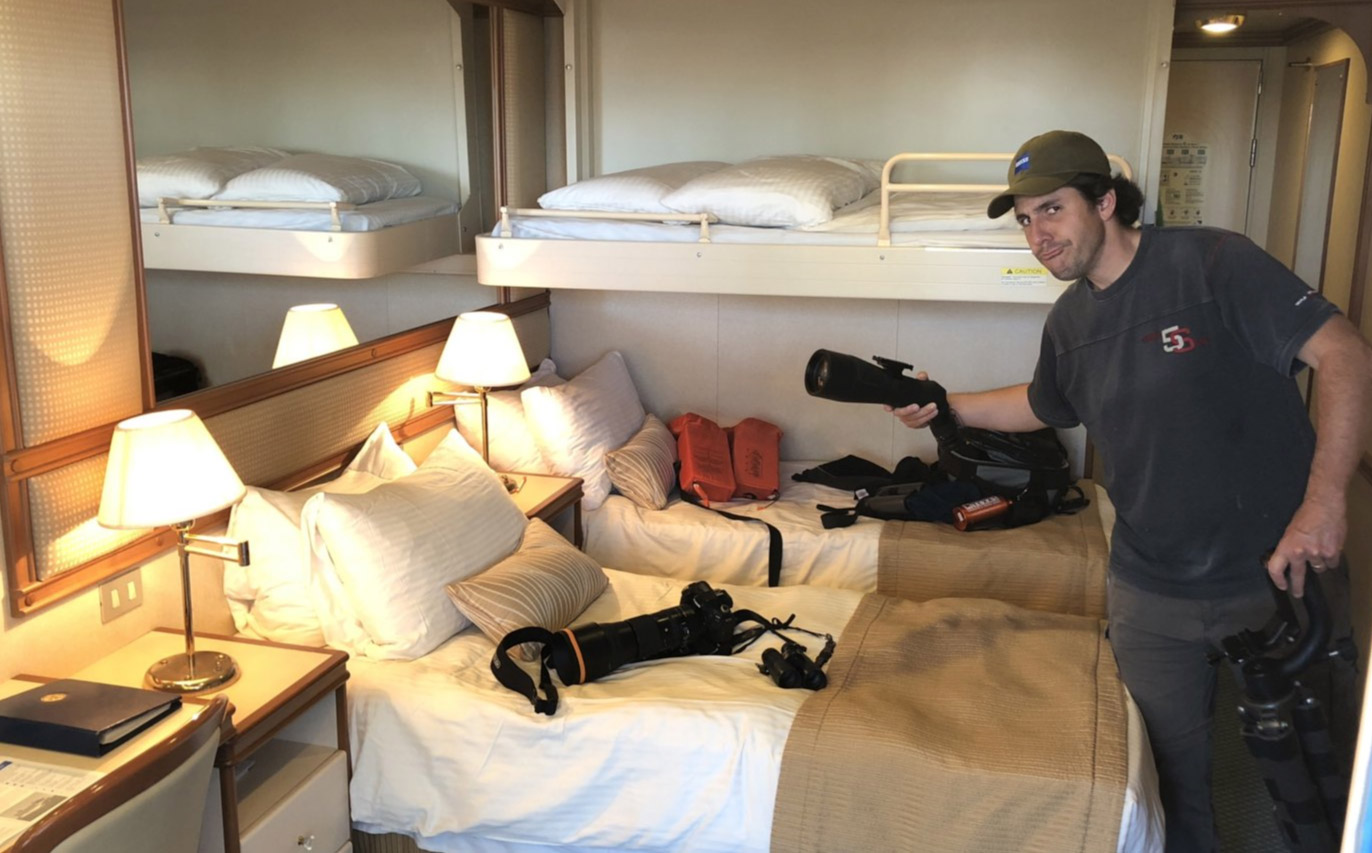 Dorian checking out the cabin

Before we could depart there was the mandatory, emergency drill. This initiated with a blast of the alarm, followed by us descending 5 flights of stairs to our muster point with 800 other guests. One misconception I had was that this would be a lightly packed cruise--it was not. As far as I could tell the cruise sold out and the thing was packed to the gills with passengers. According to the Princess Website, our vessel, the Star Princess could hold 3,100 guests and 1,205 crew.

After listening to the captain drone on about safety procedure with way more tangents than were needed, we bailed on the interior of the ship and joined a rather large contingent of birders on the bow to see our way out of the harbor. I recognized a few familiar faces including Michael Lester who currently resides in Utah, past client Keith Camburn, and birding great Paul Lehman who I hadn't seen in over a decade.  I also had the pleasure of meeting a birding legend in Guy McCaskie. 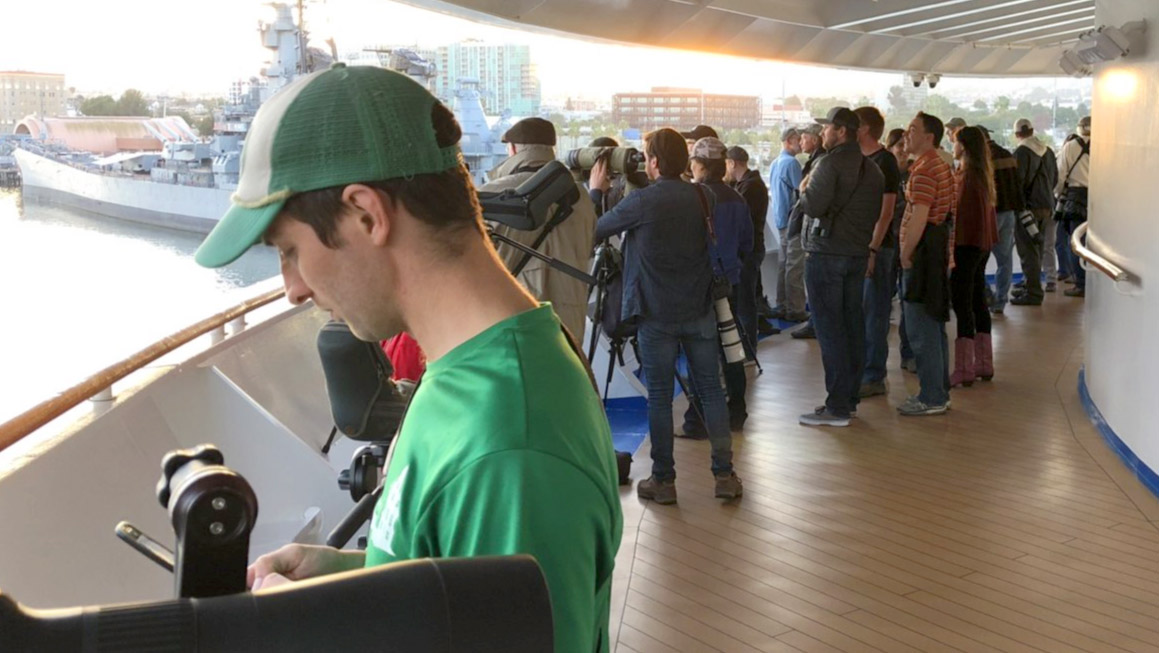 We had gotten a late start so by the time we reached the breakwater it was for all intents and purposes too dark to bird. We managed PEREGRINE FALCON and BLACK-CROWNED NIGHT-HERON on the way out, then quickly disappeared to our cabin. 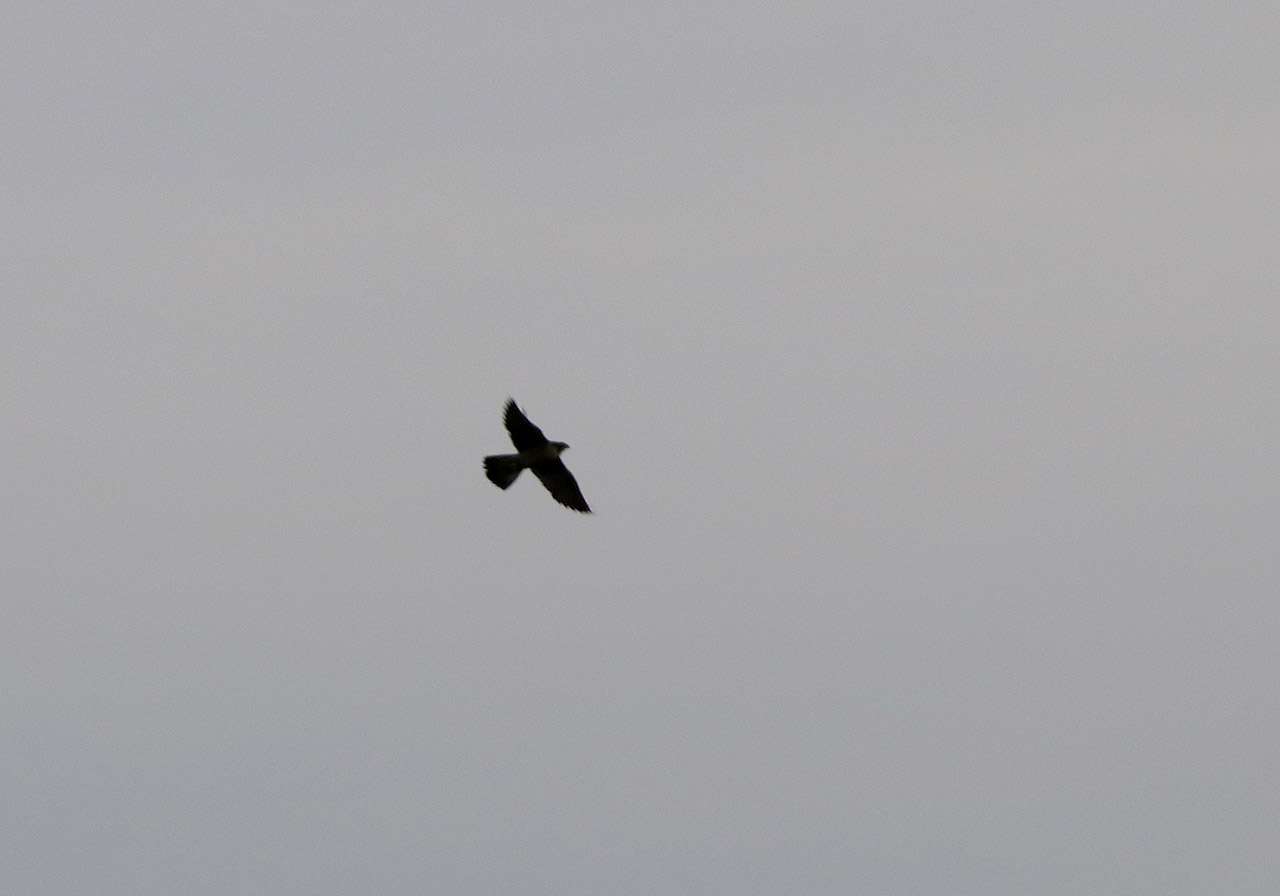 Peregrine Falcon terrorizing all other flying things in the port

One thing to remember about a November repo cruise on the best coast (that's right--the best) is that daylight is at a premium. Sunrise was sometime between 7:30 and 8:00 am, and sunset between 4:45 and 5:00 pm. This meant that there was a lot of downtime in the evenings. On our first night on ship this gave us an opportunity to look at field guides and study up on what we would be looking for the next day. 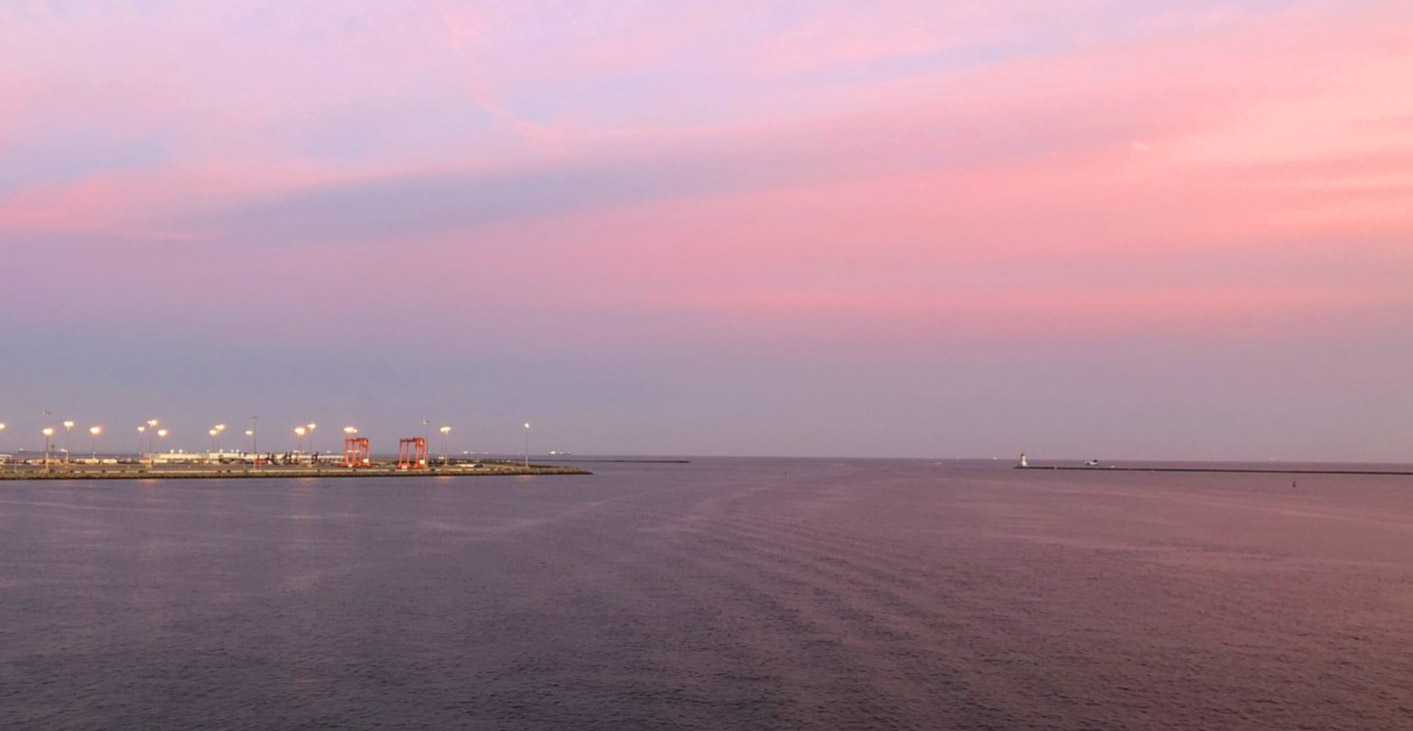 Sunset over the breakwater as we departed LA

For most birders on the ship there were 2 very distinct targets. The first and most expected was Mottled Petrel. This should be a give me on this cruise this time of year, but being on the open ocean there are no guarantees. The second bird for many was a "hopeful", and for most probably a second thought due to how rarely encountered it is. That bird is the Short-tailed Albatross. A species that half a century ago was brought to the brink of extinction when all the breeding pairs were killed off. If it wasn't for juveniles at sea, the species would have been wiped from the face of the planet. When these young birds reached sexual maturity, they returned to one breeding location on Torishima. And with conservation efforts, it is estimated that there are perhaps 2,500 on the planet now.

The main difficulty in seeing these birds is they are rare in North American Waters--which makes sense given their occurrence range of 13,400,000 sq miles.over the entire Pacific Ocean. Being only the 2nd west coast pelagic I had been on I had a handful of more likely species like Fork-tailed Storm-Petrel, Buller's Shearwater, and Laysan Albatross I hoped to pick up. I also studied up on Cook's Petrel, the auklets, and various other seabirds with hopes I wouldn't miss anything I caught in my scope or binoculars.

After dinner and relaxing in the room it was time to turn in for the night. As it would turn out this was the lousiest night of sleep I ever had. I couldn't get comfortable on the tiny bed, and the motion of the boat made things worse. I slept some here and there, but when my alarm went off the next morning, I was anything but perky for my first day of pelagic repo cruise birding...