I was awake when my alarm started buzzing on Thursday morning. It was still dark out and the motion of the boat was quite apparent. We prepped for the day, grabbed breakfast, then emerged on the starboard side of the boat facing the sea. It was cold, mainly due to the speed at which the ship was moving. I had been told previously that the bow of the ship is the best place to be so you can see birds on both sides of the ship and have a good vantage point for birds passing in front. However this morning, the bow was closed to traffic, so we stuck to the sides. 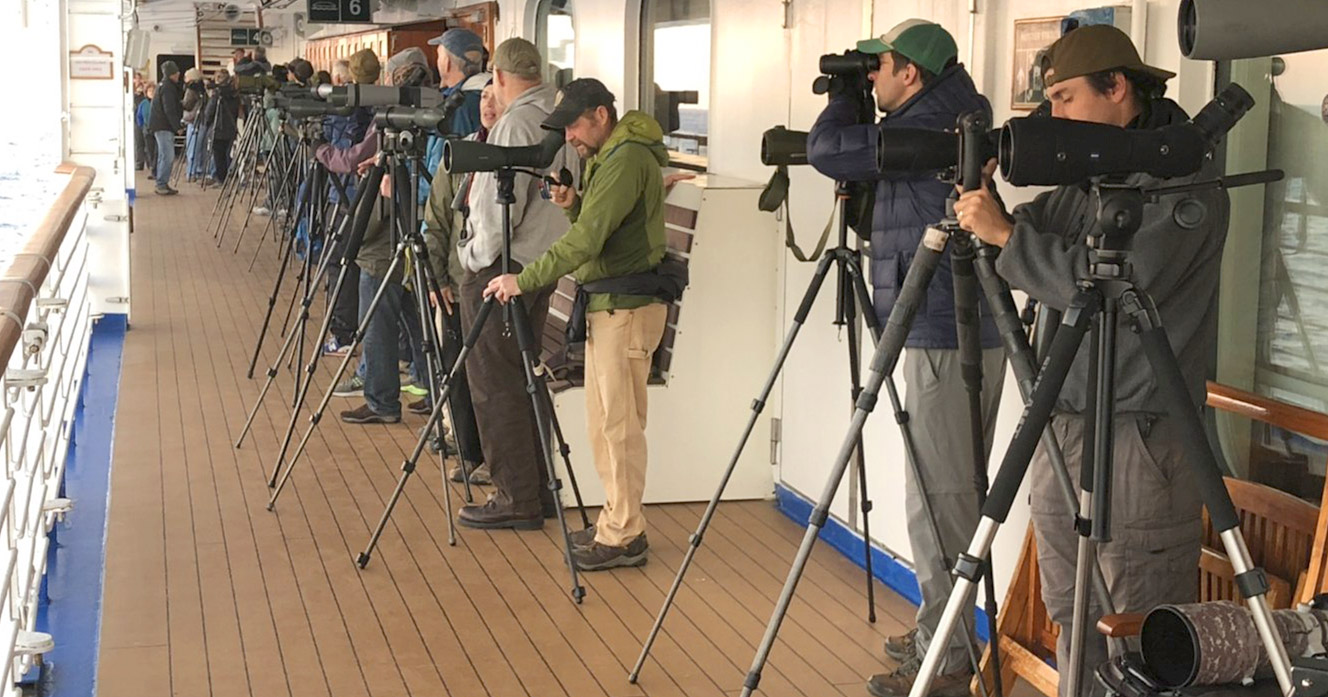 It was still rather dim out and making out birds was difficult in the early light. A few gulls passed near and far, and NORTHERN FULMAR and a handful of SOOTY SHEARWATERS appeared as things began to lighten a little. But things were definitely moving quite slow the first couple of hours. 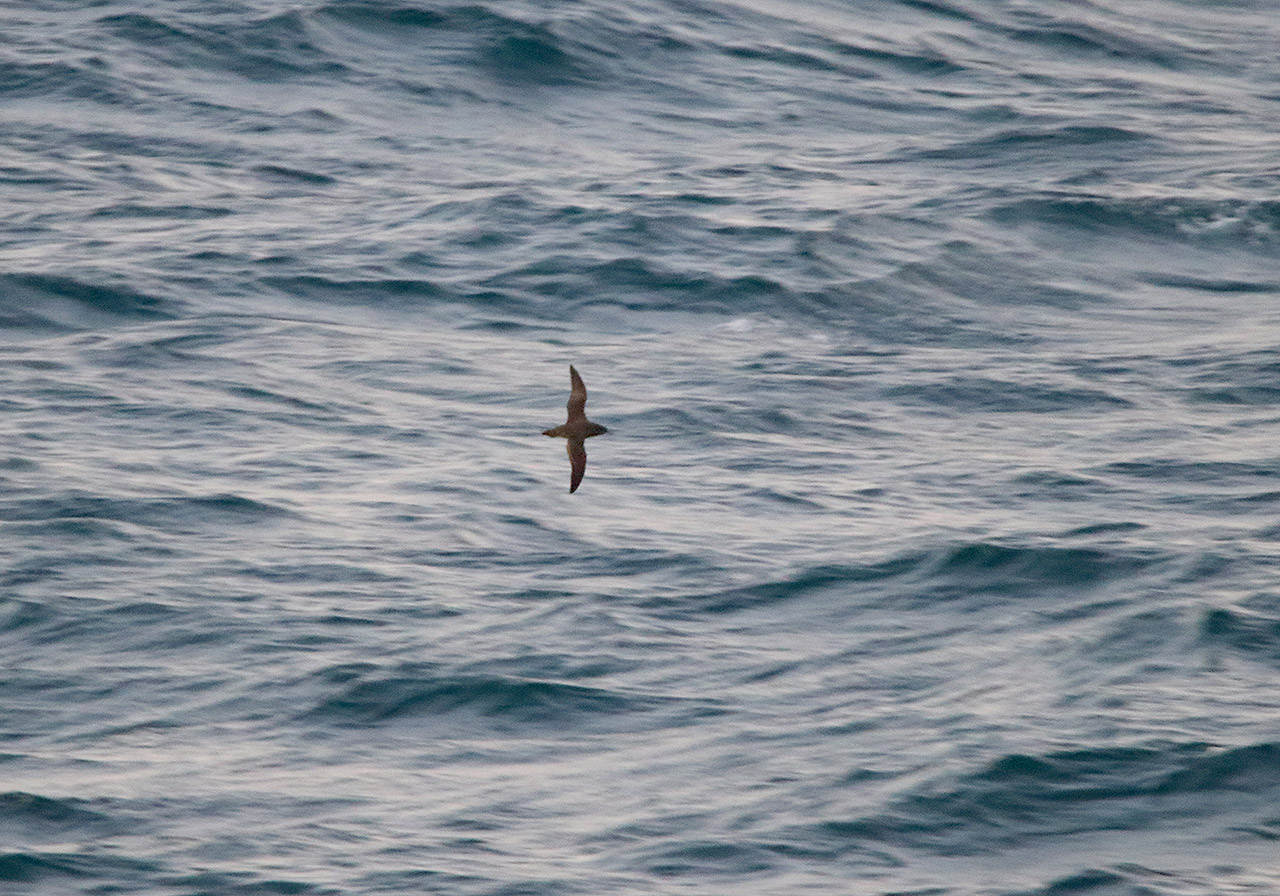 At one point as we watched a fulmar passing, I noticed a shearwater behind it and to the right. As I focused my binoculars, I could make out an obvious pink bill. I immediately took my camera and started taking pictures. I believed it was a FLESH-FOOTED SHEARWATER, but the pictures weren't great. Several others looked at the pictures and concurred that is what it looked like, but it was pretty far out. 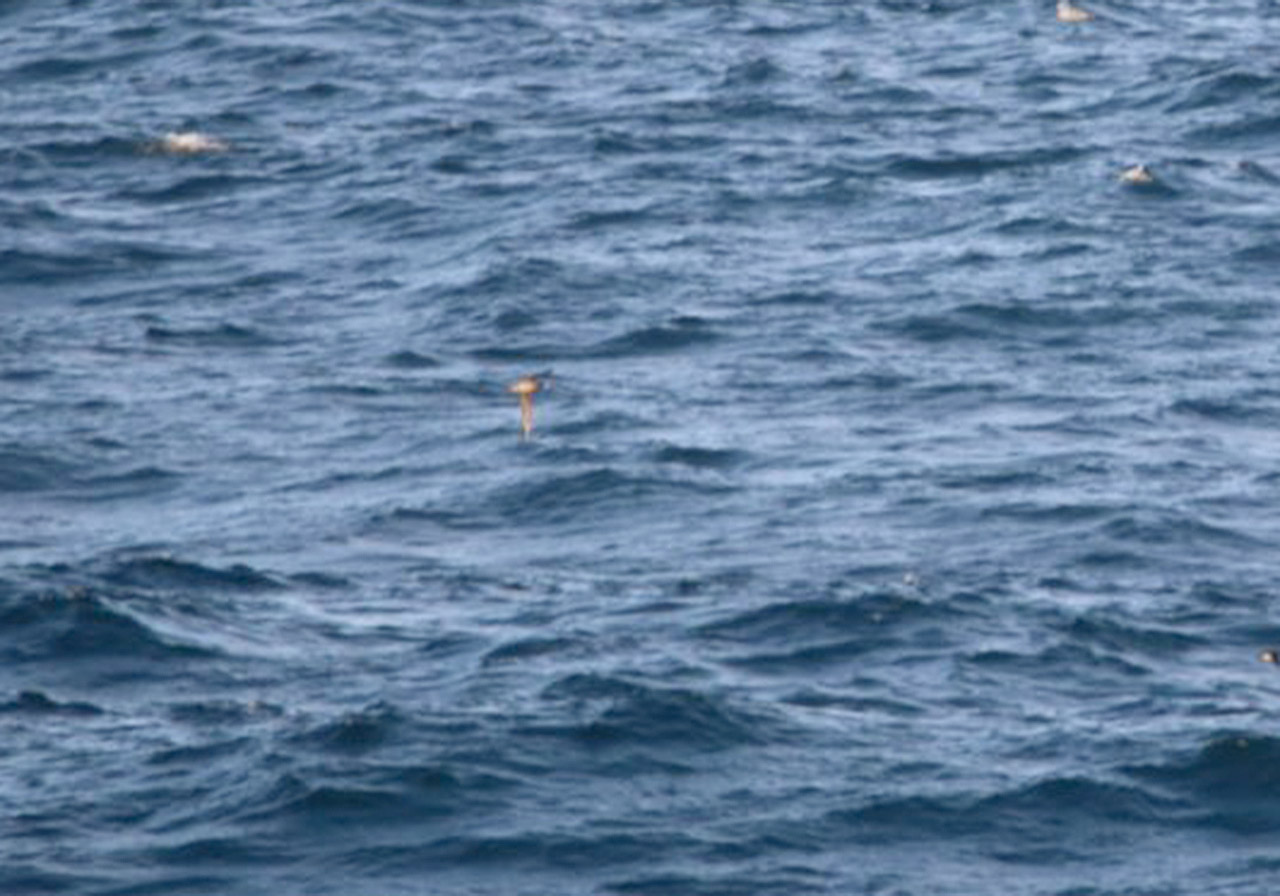 There was a lot of downtime punctuated by the occasional burst of excitement. A distant BULLER'S SHEARWATER made a pass, a lifer for me. A single PINK-FOOTED SHEARWATER came by some time later. Besides the 3 single species, we tallied around 12 SOOTY SHEARWATERS. Myself and several other saw several completely dark storm-petrels in the distance at one point--but species ID was impossible. The general assumption this time of year and locations would be ASHY STORM-PETREL, given the lack of white on the rump. 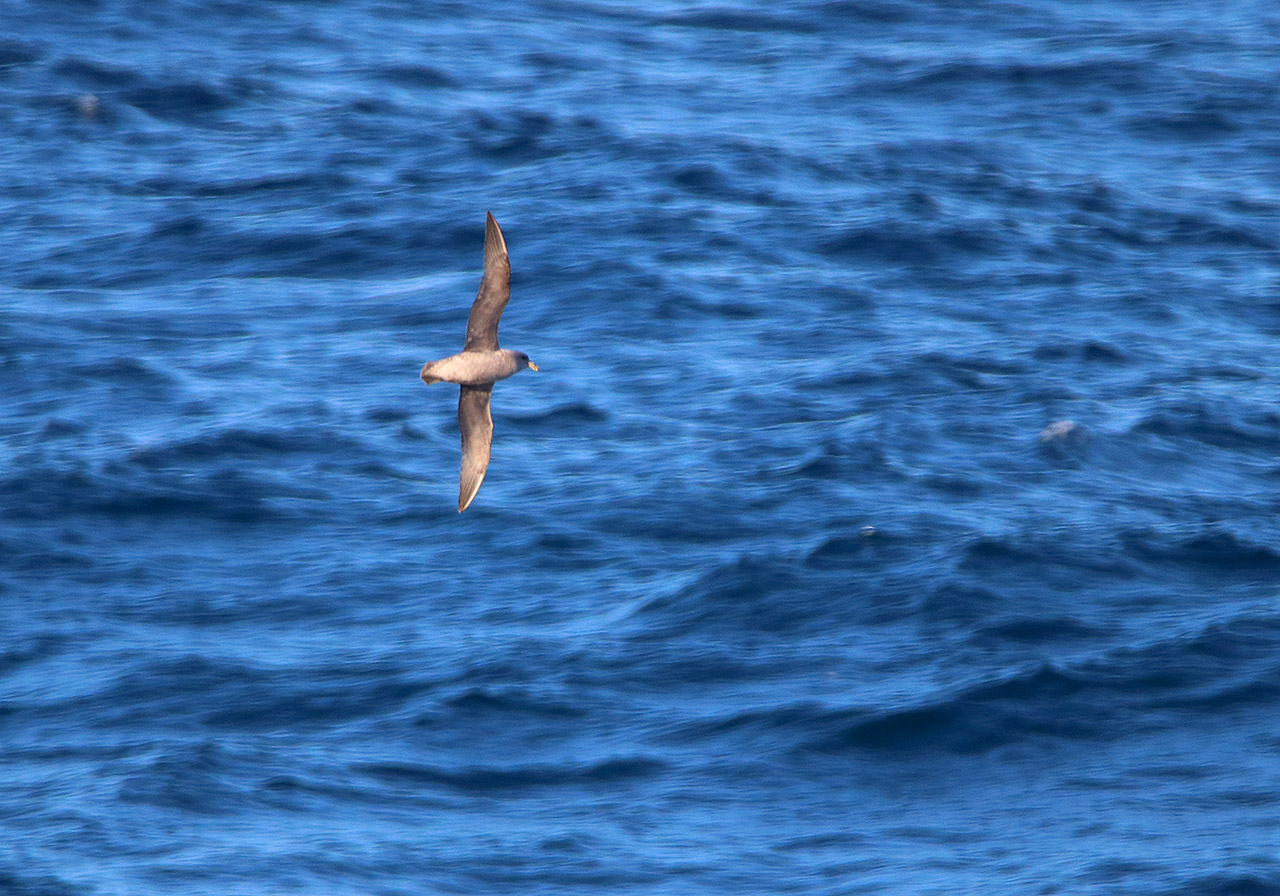 The ubiquitous and ever present Northern Fulmar

RED PHALAROPE came and went usually as singles, but there were a couple small flocks. CASSIN'S AUKLET awkwardly scurried away on the surface of the water when the boat would approach. The occasional POMARINE JAEGER made a pass, usually pretty far off in the distance. Things moved slowly. About an hour before noon I headed to the port side to get a different view and pick a spot to lock down for the afternoon. The bow had opened and a number of birders headed there. I wanted to get away from the crowds for a bit so stuck to the side. 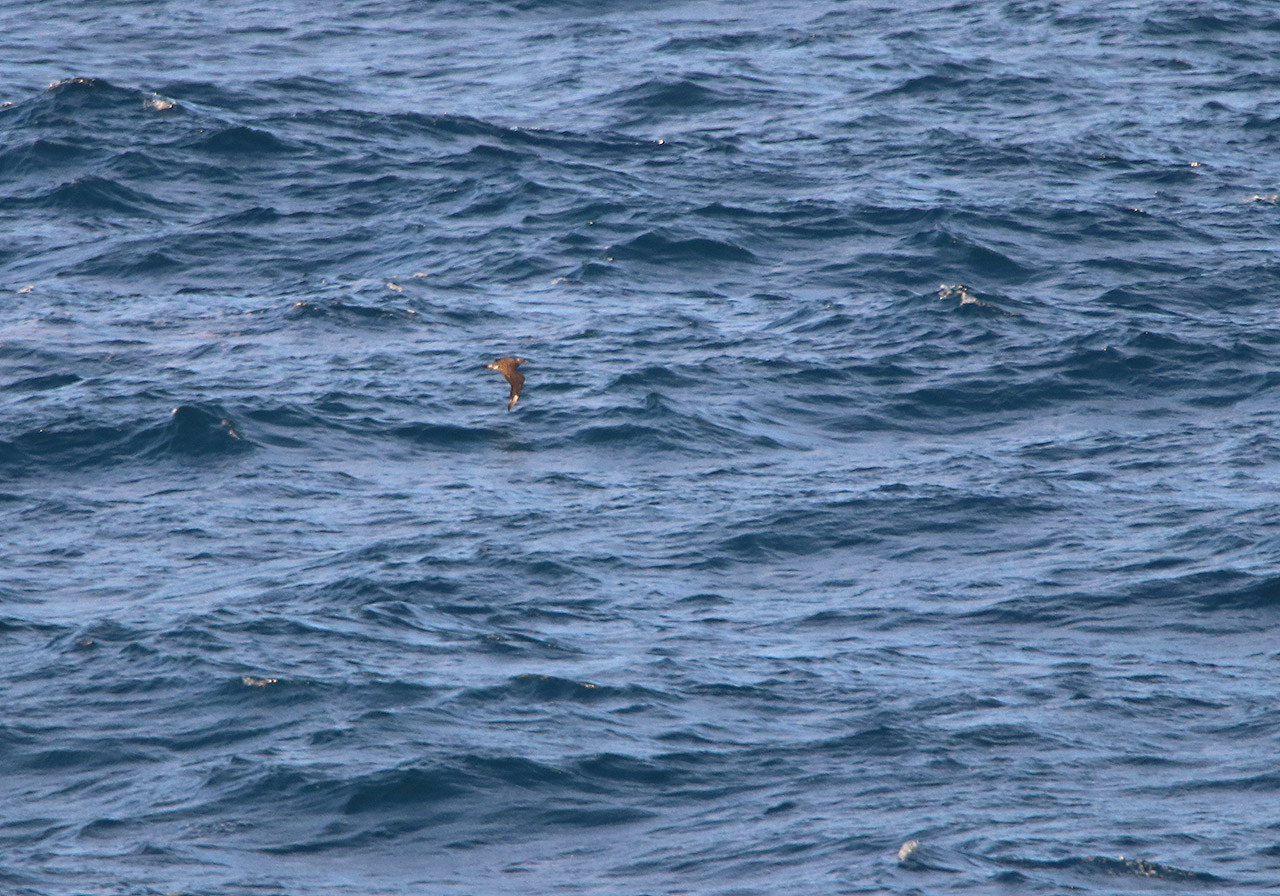 One of several Pomarine Jaegers seen during hte day

Several birders followed and a small contingent of us set up shop. It wasn't long before I yelled out SABINE'S GULL as a bird floated along in the distance. This would be the only one of the trip. Shortly after that, we picked up a Jaeger and after a few seconds, I mentioned it looked more like a PARASITIC JAEGER. It was sleek and flying fast, and lacked the barrel-chest appearance of the poms. Another only of the trip. We also snagged our first BLACK-FOOTED ALBATROSS of the day with a distant flyby.

Eventually, I took a lunch break and after hurriedly scarfing down a hamburger on the lido deck, returned to the post on the side of the ship. Out of nowhere the entire contingent of birders appeared and filled in the entire front section of the side. They had been booted from the bow due to rough water conditions. 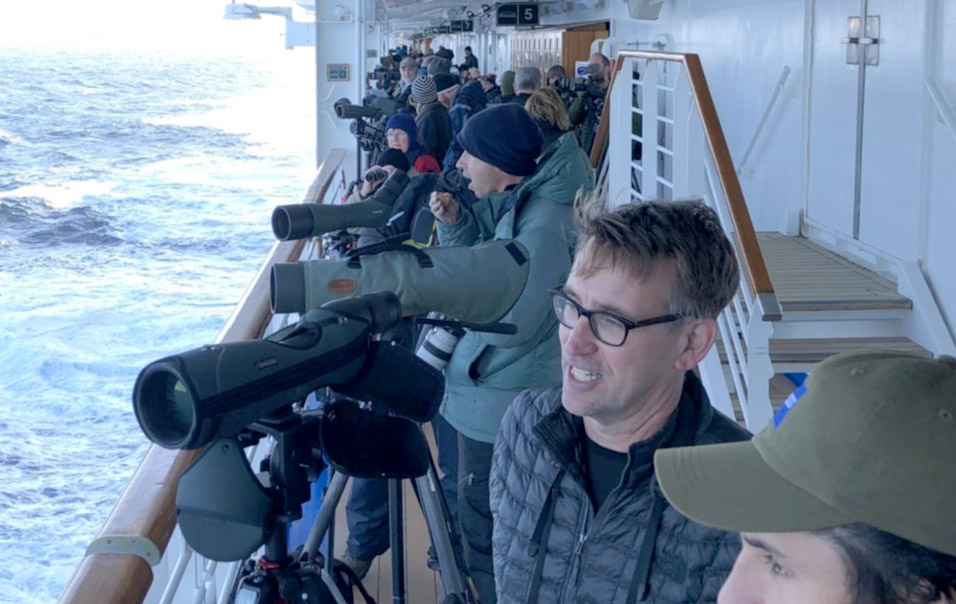 The afternoon crowd was even bigger!

I decided to take a quick walthrough just to see what the crowd was like...

The 5 hour afternoon vigil was even slower than the morning watch. Only 11 species graced us, but one was a lifer for me with a LAYSAN ALBATROSS. We actually had 2 as well as 3 more BLACK-FOOTED ALBATROSS, but none came anywhere near the boat. And all were in the last 90 minutes as we made our way further north in California waters. 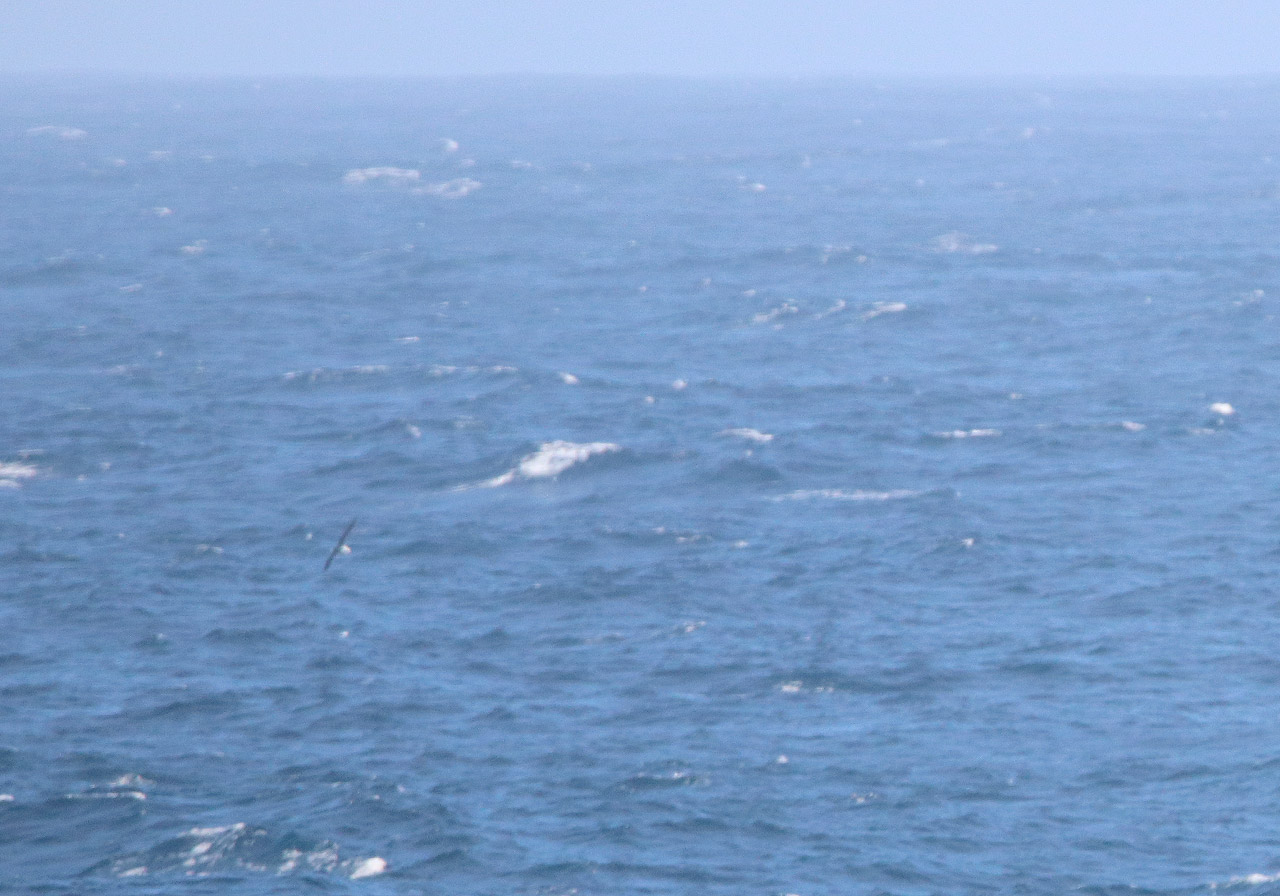 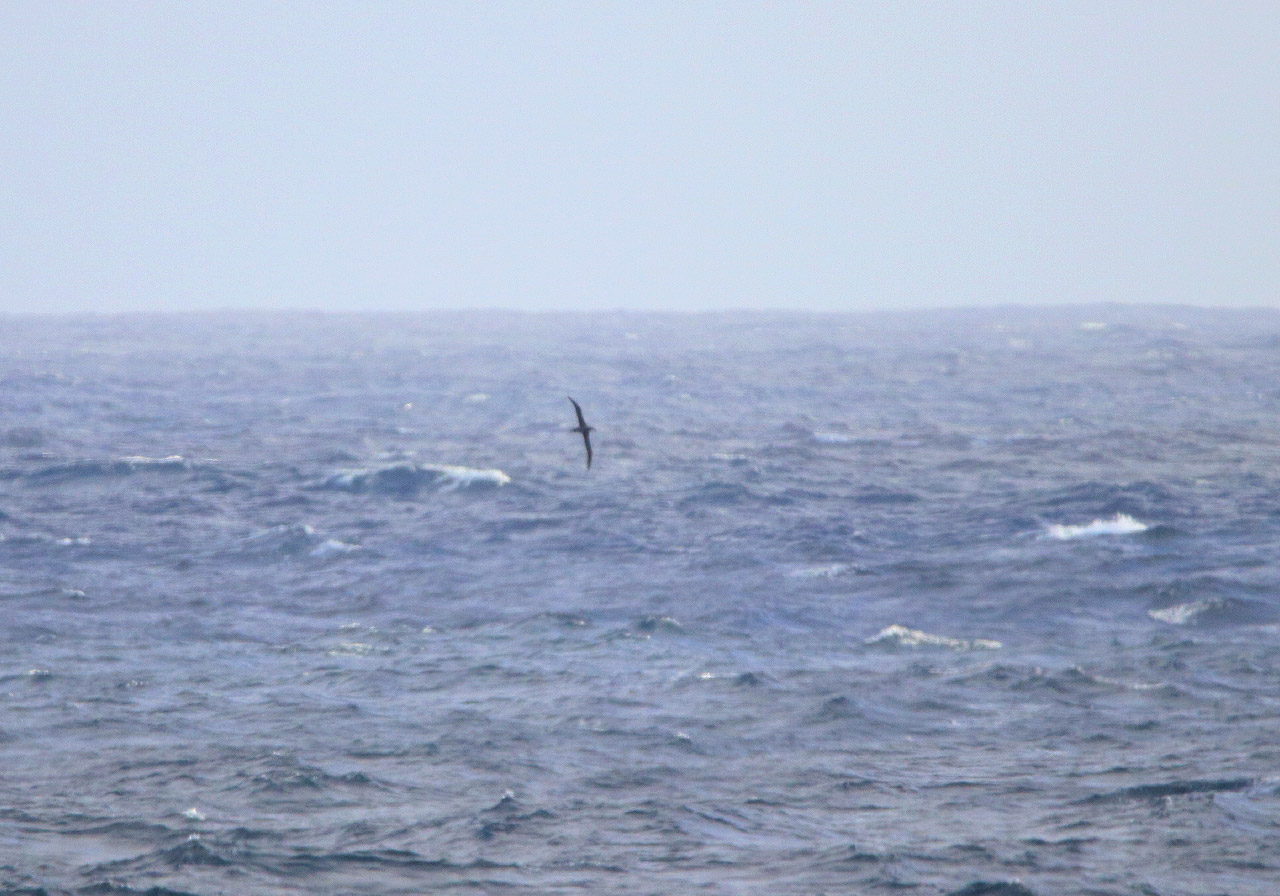 Aside from the albatrosses 14 CASSIN'S AUKLET were one of the most numerous species of the afternoon--following the 6-7 NORTHERN FULMAR that popped up every hour. 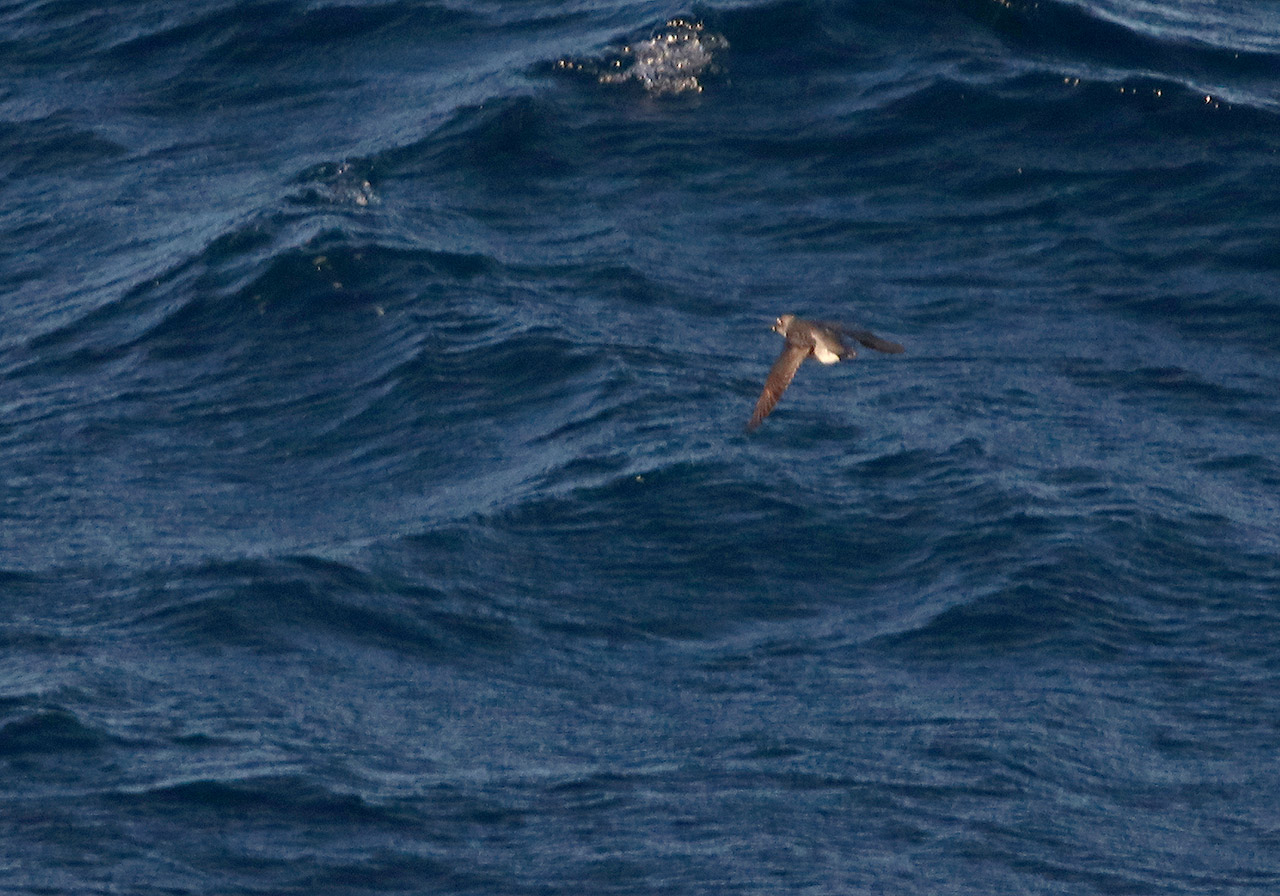 Typical ass-end view of a Cassin's Auklet avoiding the ship

There was a brief moment of excitement when someone yelled out that there was a Cook's Petrel. This was about the same time that an interesting Northern Fulmar and a Buller's Shearwater made a pass and left several of us scratching our heads. I got shitty pictures of the Buller's and a few of the fulmar but missed the petrel--which would have been a lifer. Later in the evening, I heard that this species was taken back upon further reflection, so I felt much better about things. 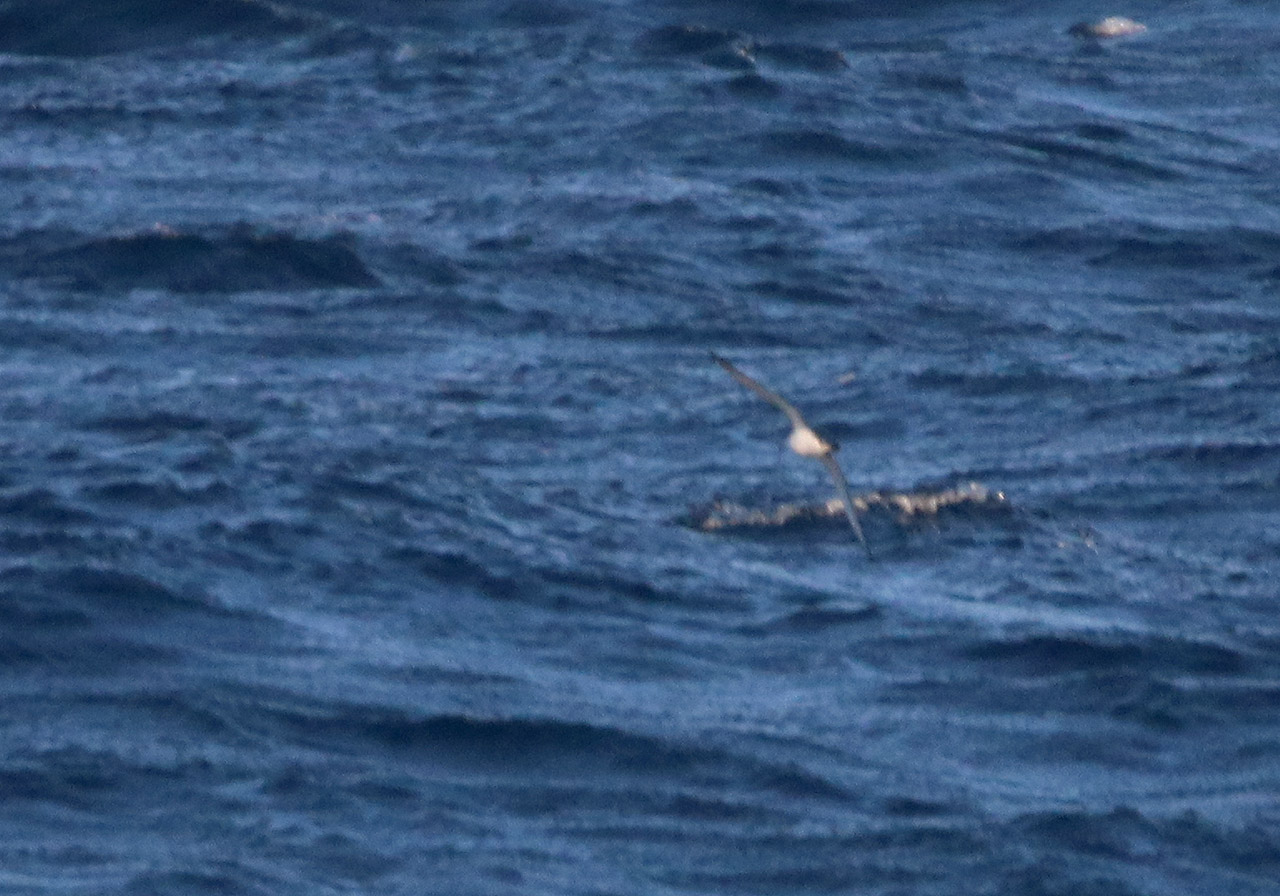 The sun finally started to fade to the west, so I decided to wrap things up and head to the room to get some pictures. My companions remained on deck till the last rays of light disappeared hoping for one of our targets to emerge--alas they did not. But the sunset was a beauty. 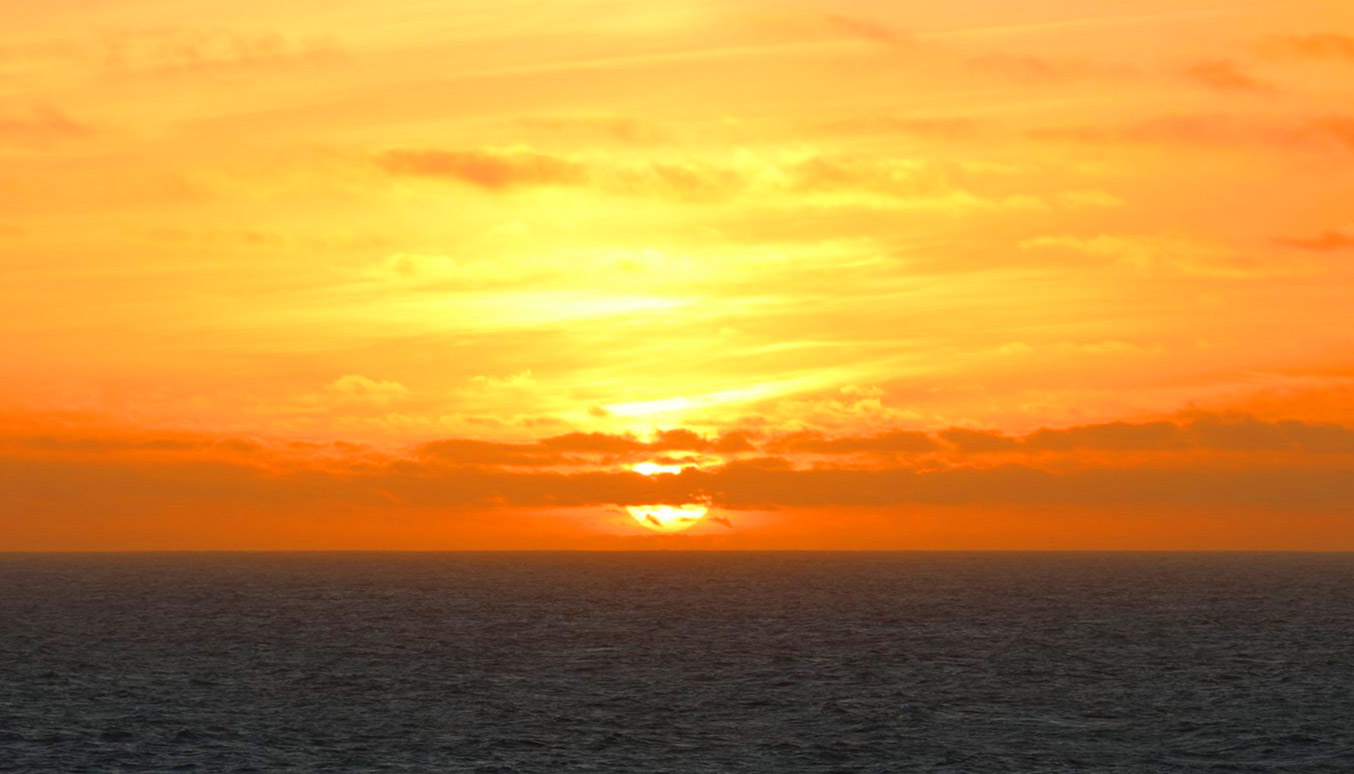 Gorgeous sunset over the Pacific

As we spent the rest of the relaxing, eating dinner, and talking with other birders on board the consensus was that it was a disappointing day. I was actually thinking things went pretty well. I snagged 2 lifers and had 2 other possible lifers that I just didn't get good looks at so I left them off my list. I had expected distant and terrible looks at far and few between birds. Others felt the numbers were light and the overall diversity low--but being my first repo pelagic, I was pretty happy with the outcome, minus the lack of target species.

Here are two views that I had much of the day.  Distant views of open ocean where birds were mere specks on the horizon, and water-filled views as I looked down from 30-50' above the water on the ship. 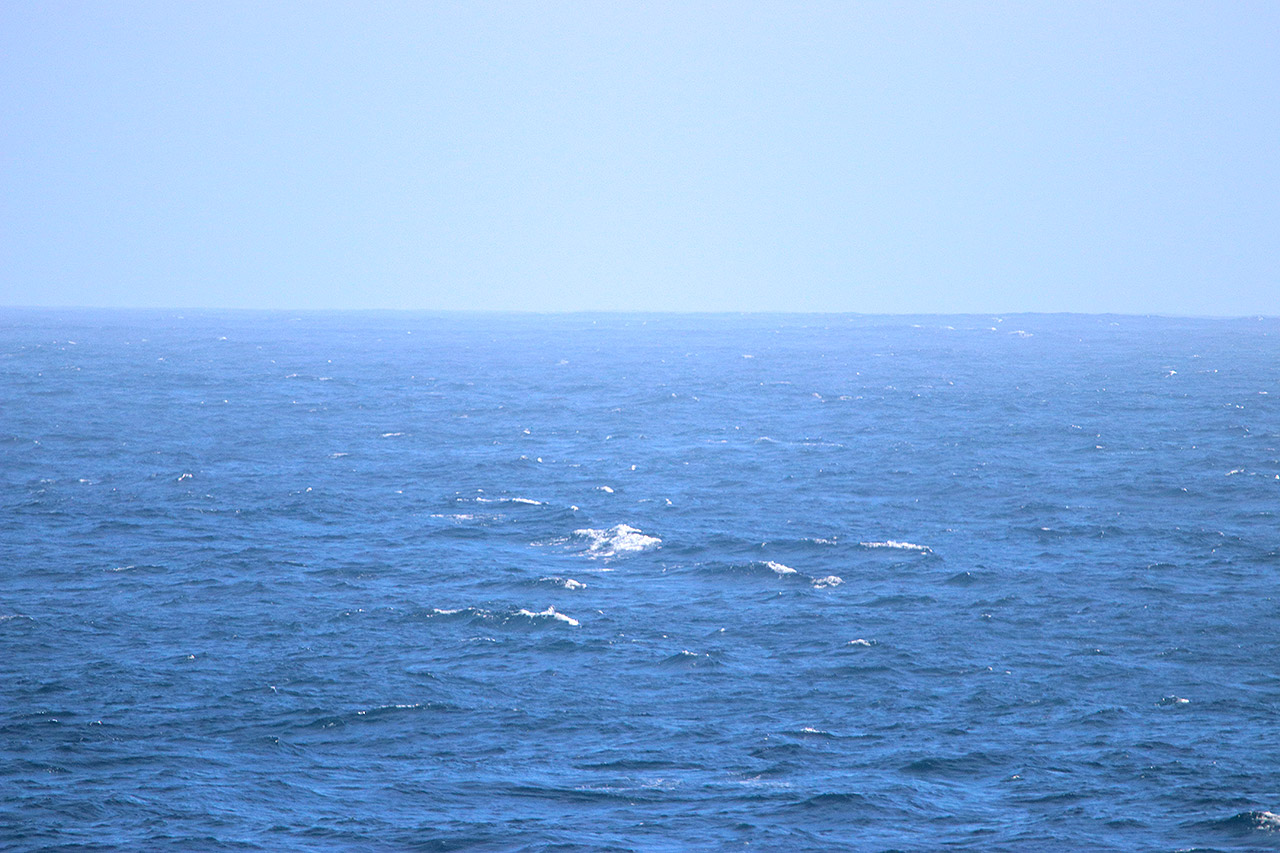 Typical view through my 600mm lens looking out over the ocean 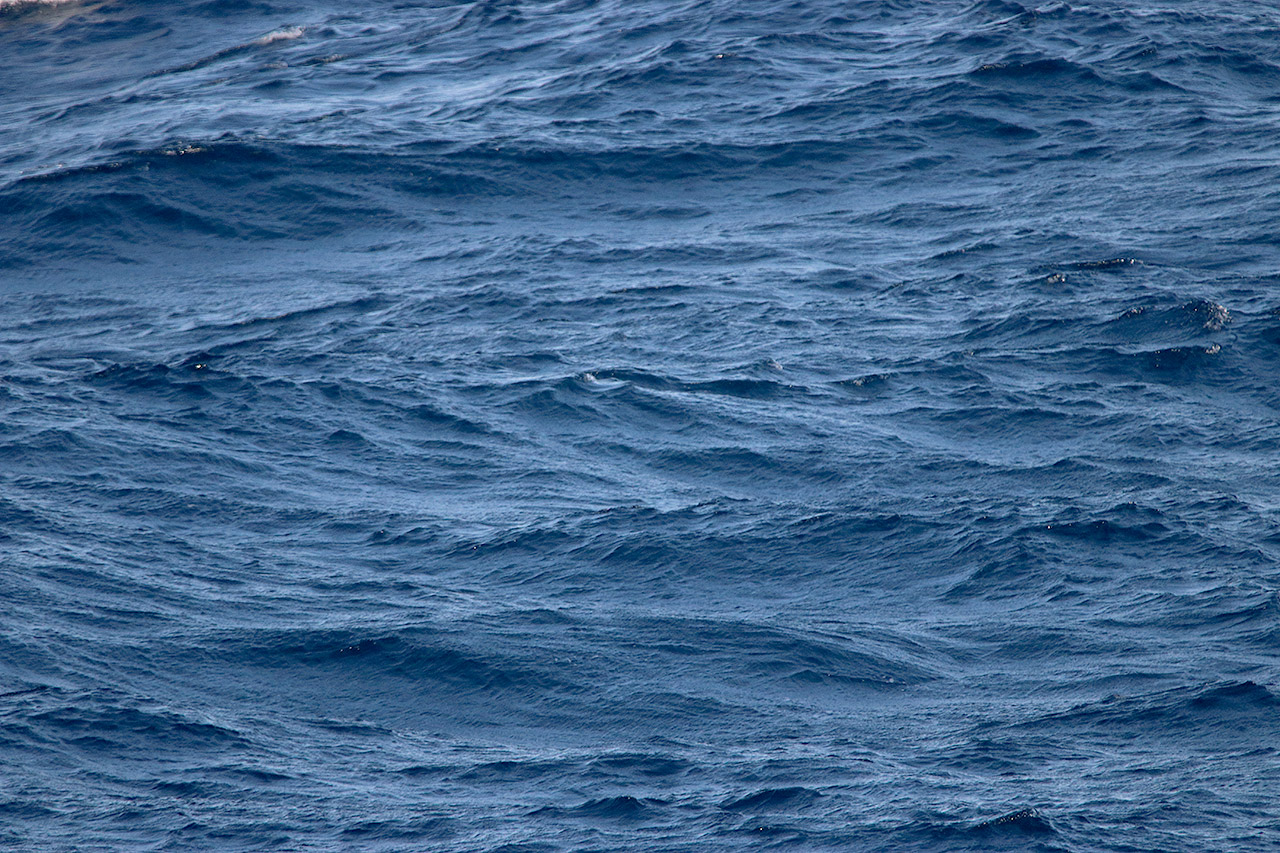 Being dark by 5 meant we had 5 hours to kill, and being a cruise there is lots to do. That being said, I was wiped and just wanted to relax. We retired to our room and watched Thursday Night Football, but for those inclined to do other things, there was an outdoor theatre and an indoor theatre with movies playing basically all day and evening long. A casino, a sports bar, a coffee shop, numerous lounges, sit-down restaurants (with cover charge), and various other entertainment opportunities can provide things to do if that's your cup of tea.

Being honest during my time on the ship, I never went lower than the 6th deck, and never ventured back past the main lobby to the read half of the boat. I stuck mostly to the room, the Lido deck (14th floor) where the restaurant bars and pools were located, the bow and side decks for birding, and an occasional trip to the lobby where the bar and a cafe were located. Leaving your position was a risky bet--if a bird flew by it would be gone within minutes at the most. If you were inside, you missed out, if you were on the wrong side, you missed out. And so on and so forth.

If you do a repo pelagic, you should plan on spending the majority of daylight hours glued to the group and scanning the water--and Friday would prove the importance of that...