In the April 2016, I got an itch to put a screech-owl box up in my backyard.  I knew the odds of getting an owl were slim, but I had seen Western Screech-Owl in the yard once at night.  The biggest issue was our house is set back on our property, so we have a big front yard, but a narrow backyard, meaning that if we put the box in our backyard it would be very close to the house.  On the upside,  if it ever got used, we would be able to see it very easily from our deck.

Our largest tree sits in the northeast corner of the backyard and stood about 50' tall.  During the summer, it is thick with foliage and would provide good cover.  And during the winter it would be easy to see and provide a southwest facing cavity for lots of sunlight.

So one Saturday I ran to Home Depot, snagged a board and built a Screech-Owl box to spec using a Kestrel/Owl directions form the Washington Department of Fish and Wildlife: 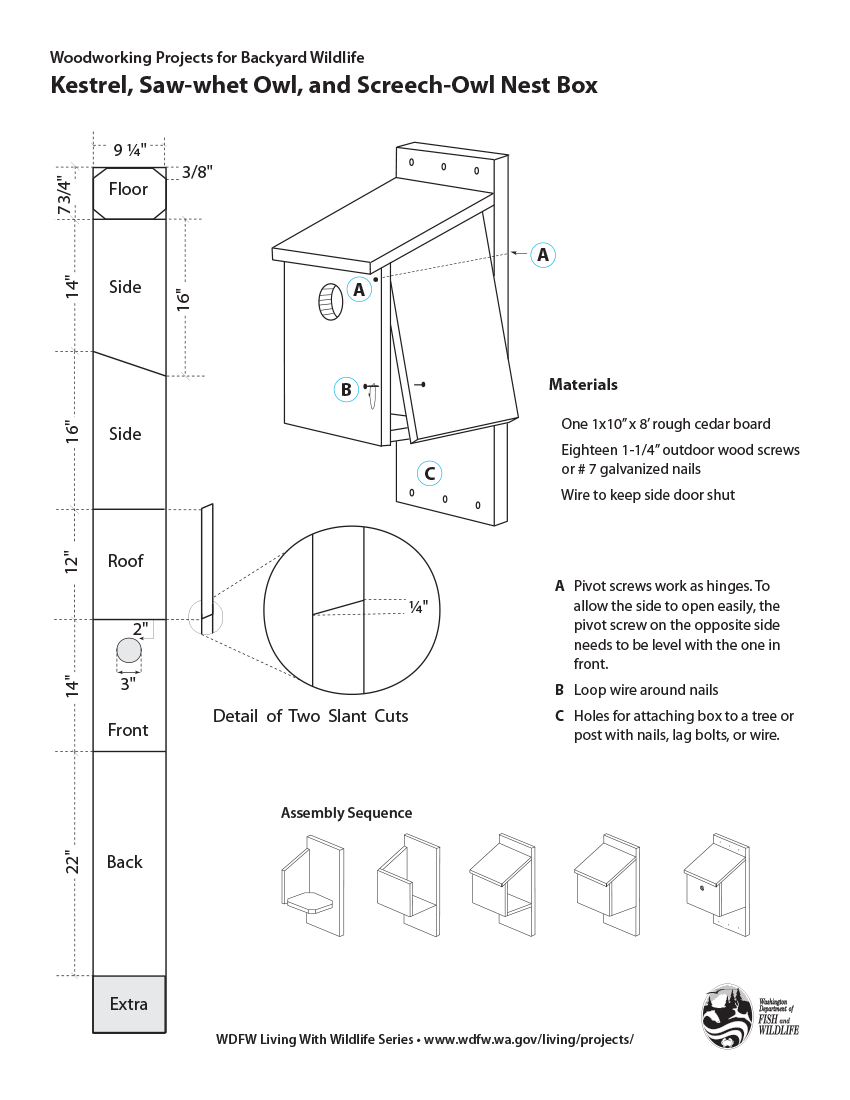 The directions are super easy to follow, and I figured I would build a couple more to throw up in the mountains for Flammy, and Saw-whets.  But the first one was going to end up in the yard--and perhaps give the family a great learning and watching experience 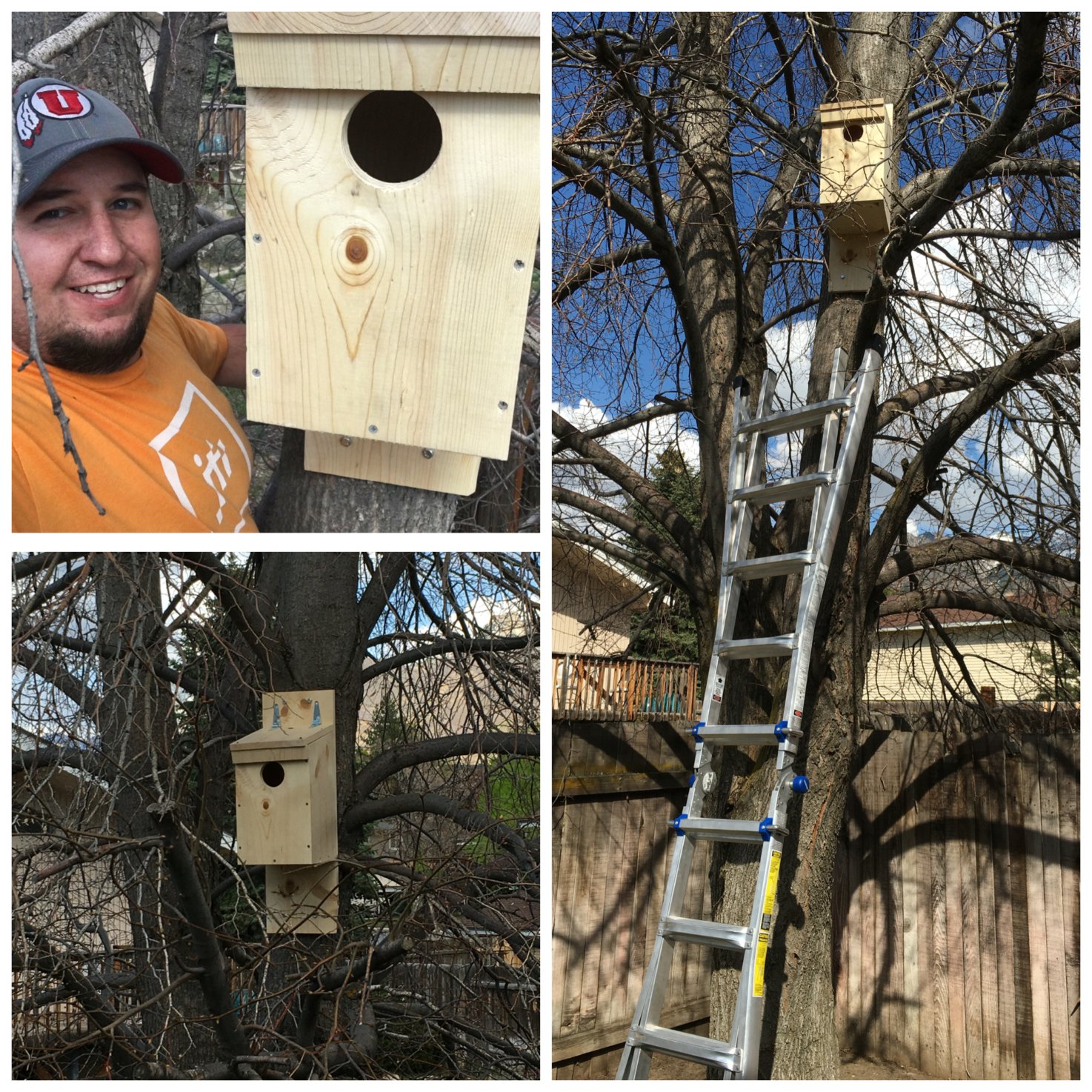 The end view from our dining room would make it easy to keep an eye on... 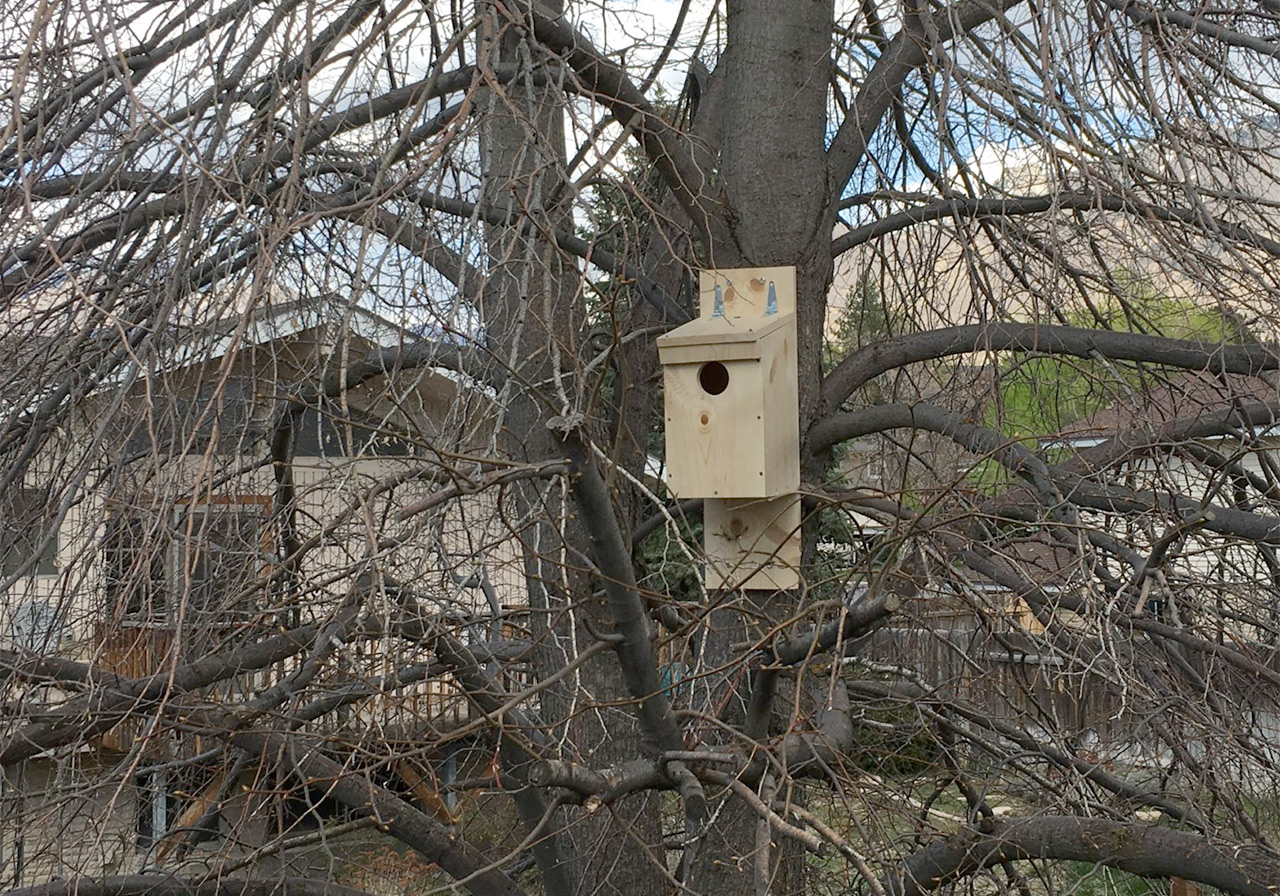 So up the box went and then it was the waiting game.  And we waited and waited, and check and checked.  Every time I let the dog in or out of the house.  Every time I went out to use the BBQ, get firewood, pick tomatoes from the garden, play baseball with Cam, etc etc etc.  I checked.  And nothing.

But one-day this February I found some walnuts sitting on the ground under the box.  Looking up I could see what looked like more in the drain slots on the bottom.  So out came the ladder and up I went to see what the deal was.  Sure enough, there were a handful of walnuts in the bottom.  A squirrel was using the nest box as a cache! 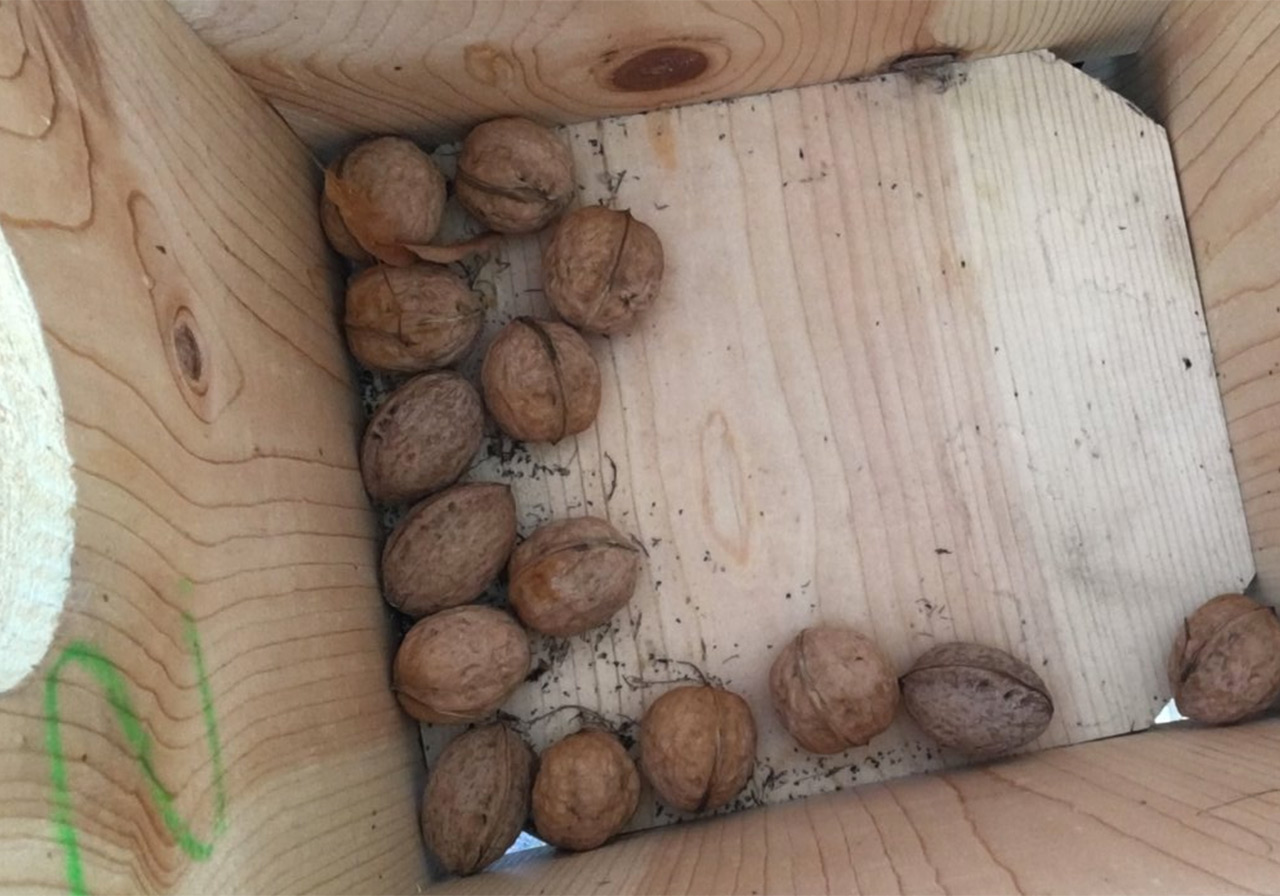 So while the box was being used, it was unfortunately not by a squirrel.  Eventually, as spring wore on the nuts disappeared, and the squirrel moved on.  The box was back to being just an owl box.  And the waiting game continued.  The checks o the empty entrance hole were ritualistic.  Every morning, every evening, and anytime I walked by the back door.

On Thanksgiving morning, I was in the yard smoking our turkey and peeked up at the box--still empty.  Last night I let the dog in and looked up--and again nothing.  It was expected.  Today I was sitting in our dining room working on something when I got up to grab a drink.  I peered out at the next box and had to do a double take.  There in the entrance hole was a WESTERN SCREECH-OWL! 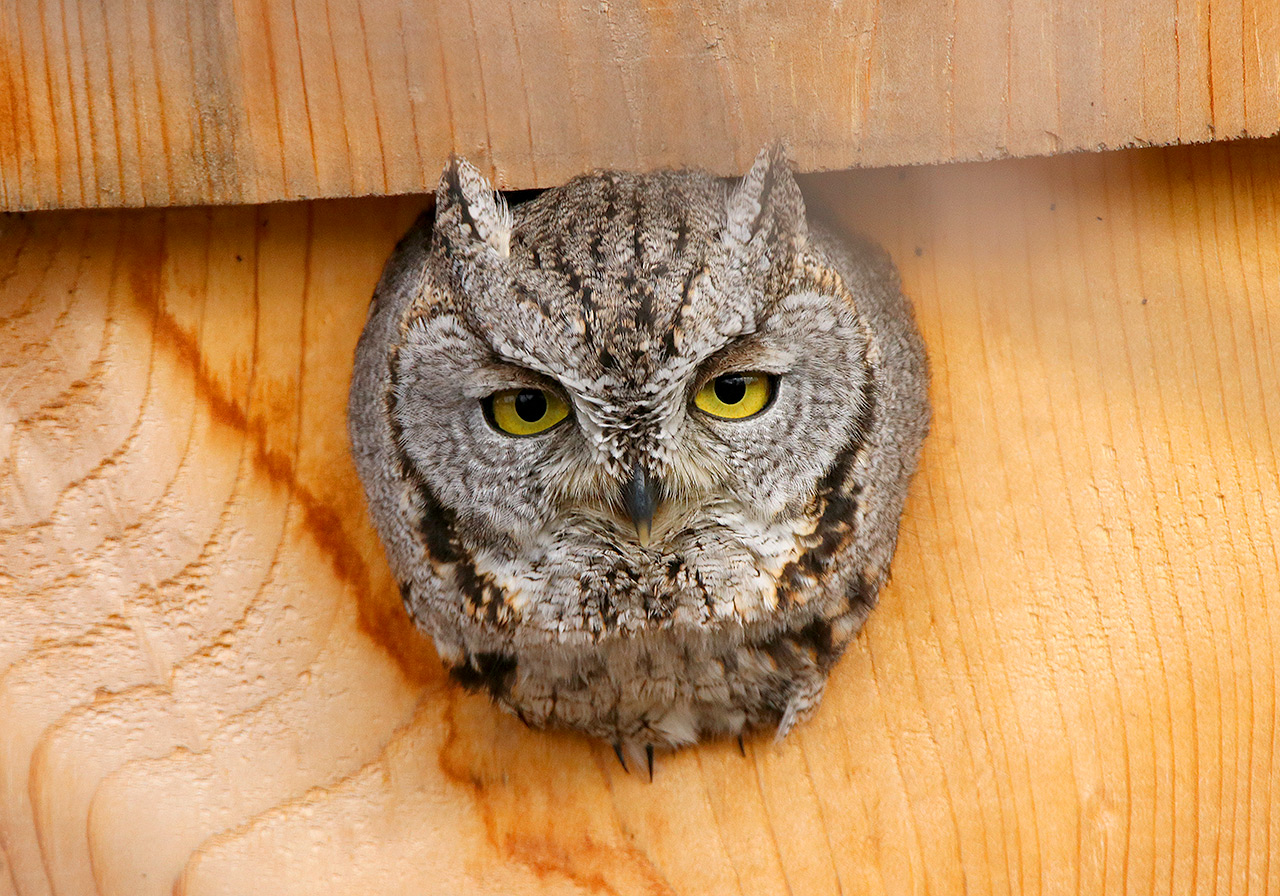 I was so excited are started freaking out to get Sam to come take a look.  This was, after all, more than 18 months in the making!  We admired the little owl, excited that it was using our nest box.  And luckily, Cameron woke up from his nap and got to see his first day time Screech-Owl.

My hope is that tomorrow he/she will return to the roost and maybe use it all winter long.  I would be more excited about it getting used as a winter roost due to the visibility from our deck since the leaves mostly hide the box all summer.

It might have taken a little while but the owl box is at least a small success!  And in reality, it could've taken years to get used--or perhaps never.  Yard owls are pretty hard to beat!