In 2021, we offered a standalone Himalayan Snowcock Tour for the first time in addition to our regularly scheduled Most Wanted Tours. It just so happened that when we setup a tour with Georgia Audubon for the week before, that most of their group wanted to continue and join our Snowcock Expedition. A few others opted to join the tour as well, so Taylor stayed on to help guide and drive our 2nd van—and just like that we were off to Nevada. 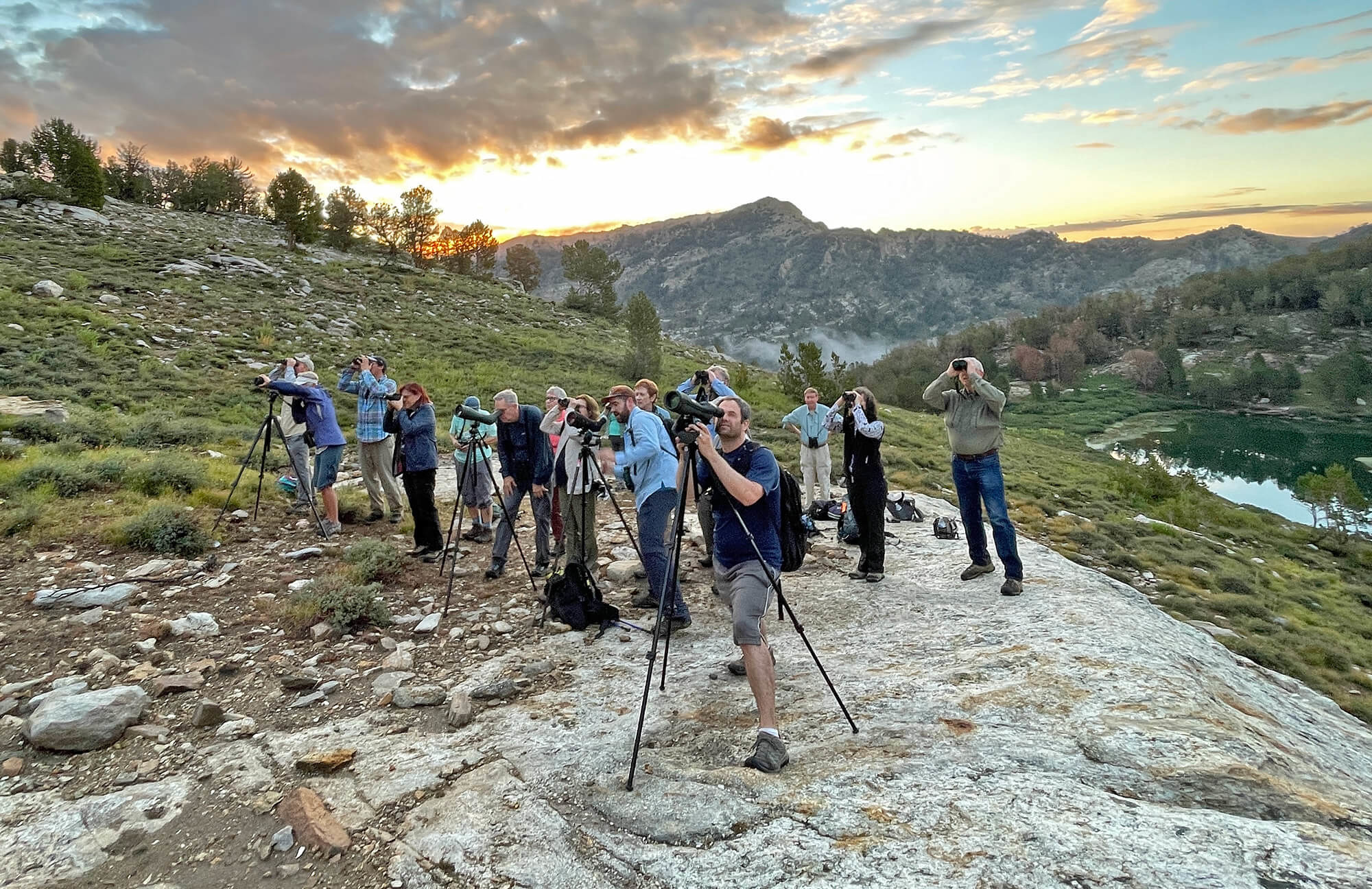 Our Group checking out the Himalayan Snowcock
As always, a quick stop at the Bonneville Salt Flats was a nice way to break up the drive. By late afternoon we arrived in Elko, checked in to our hotel, and grabbed dinner. Then it started to rain. This was a first in all my tours here—an outright downpour as we went to bed. I’m not sure how long it rained during the night, but luckily it had stopped by the time we departed the hotel before 3:00 AM.

We made our way to the Lamoille Canyon and it was apparent there had been some big rain here earlier in the week. In several places large slicks of mud were still on the road, while 10’ piles of debris and mud had been plowed off the road surface. I’m sure fires in recent years haven’t helped the canyon, and clearly there had been a bit of a mess. At the parking area everything was soaked—it was obvious that it had rained most of the night and I was slightly nervous about the trail condition. But, much to my surprise the trail was fine. As we ascended, I spotted another car coming up canyon—it was my buddy Chris Brown and his Wildside Tours group. There would be a lot of birders out and about today! 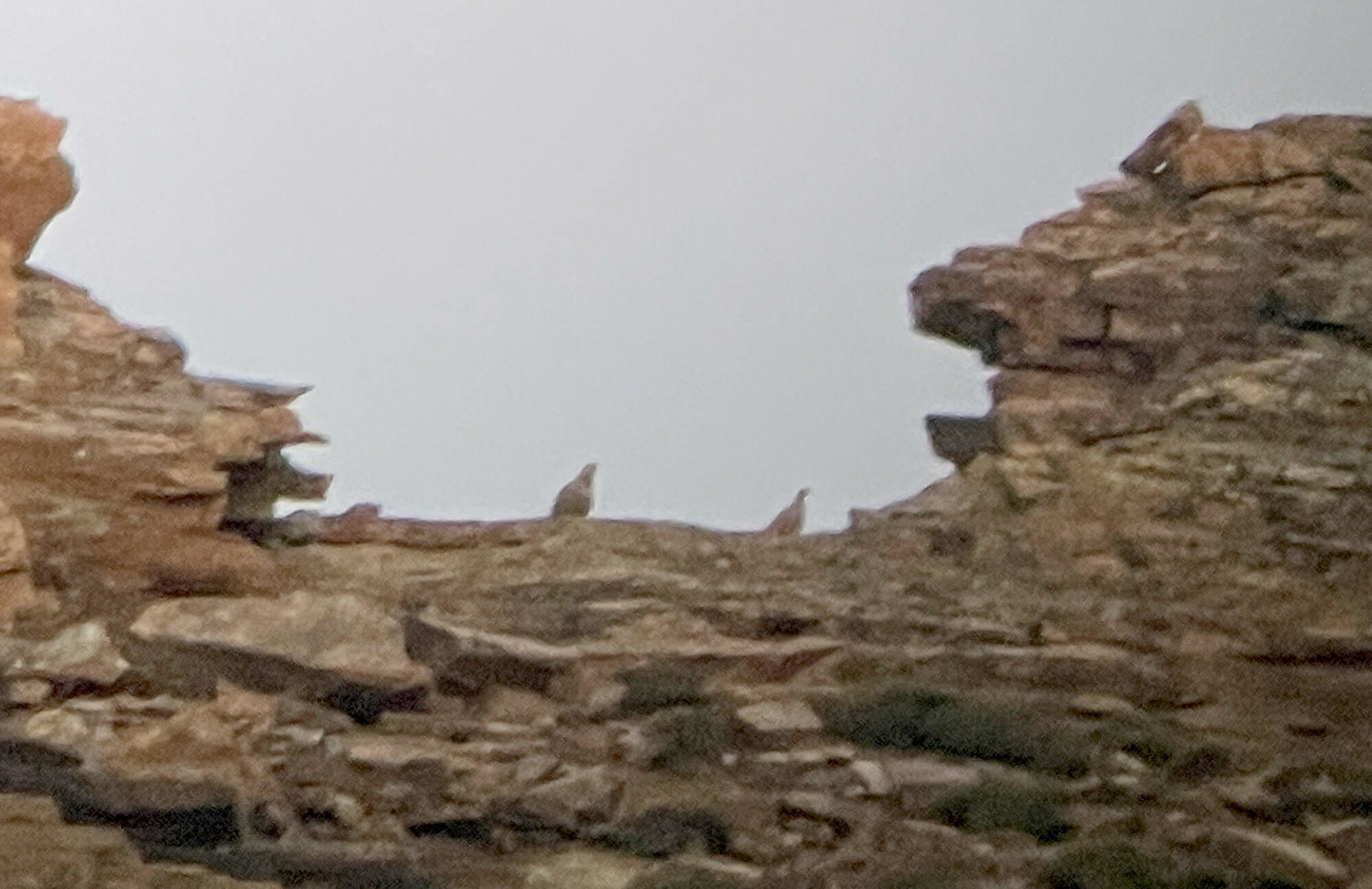 Himalayan Snowcock on a distant ridge
Despite our large group we spread out and slowly made our way to the “slab”. As we got out our scopes and started scanning as it became light, I spotted a single Himalayan Snowcock sitting in the same notch in the rocks as my tour 2 weeks earlier. I quickly got those with me on the bird, and motioned for the rest of the group to hurry as we had the bird. 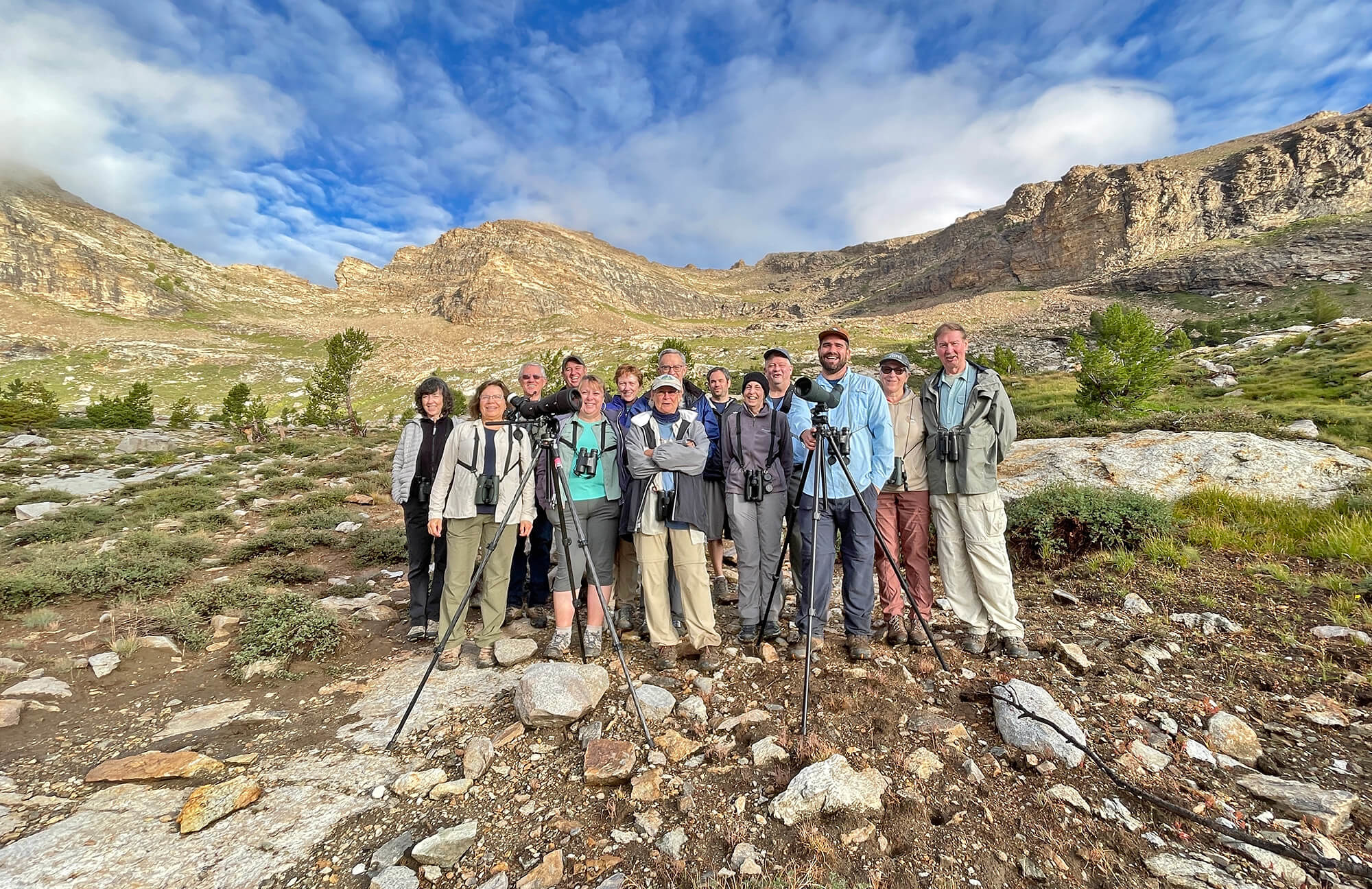 Snowcock Success
Fairly soon, everyone had seen it, as well as another bird that emerged shortly after. We made sure to keep a close eye on the birds as they made their way across the ridge line. Pretty soon the Wildside group arrive and we motioned them over to join us since we had the birds. In no time at all around 20 birders were on the slab enjoying lifer Himalayan Snowcock views. 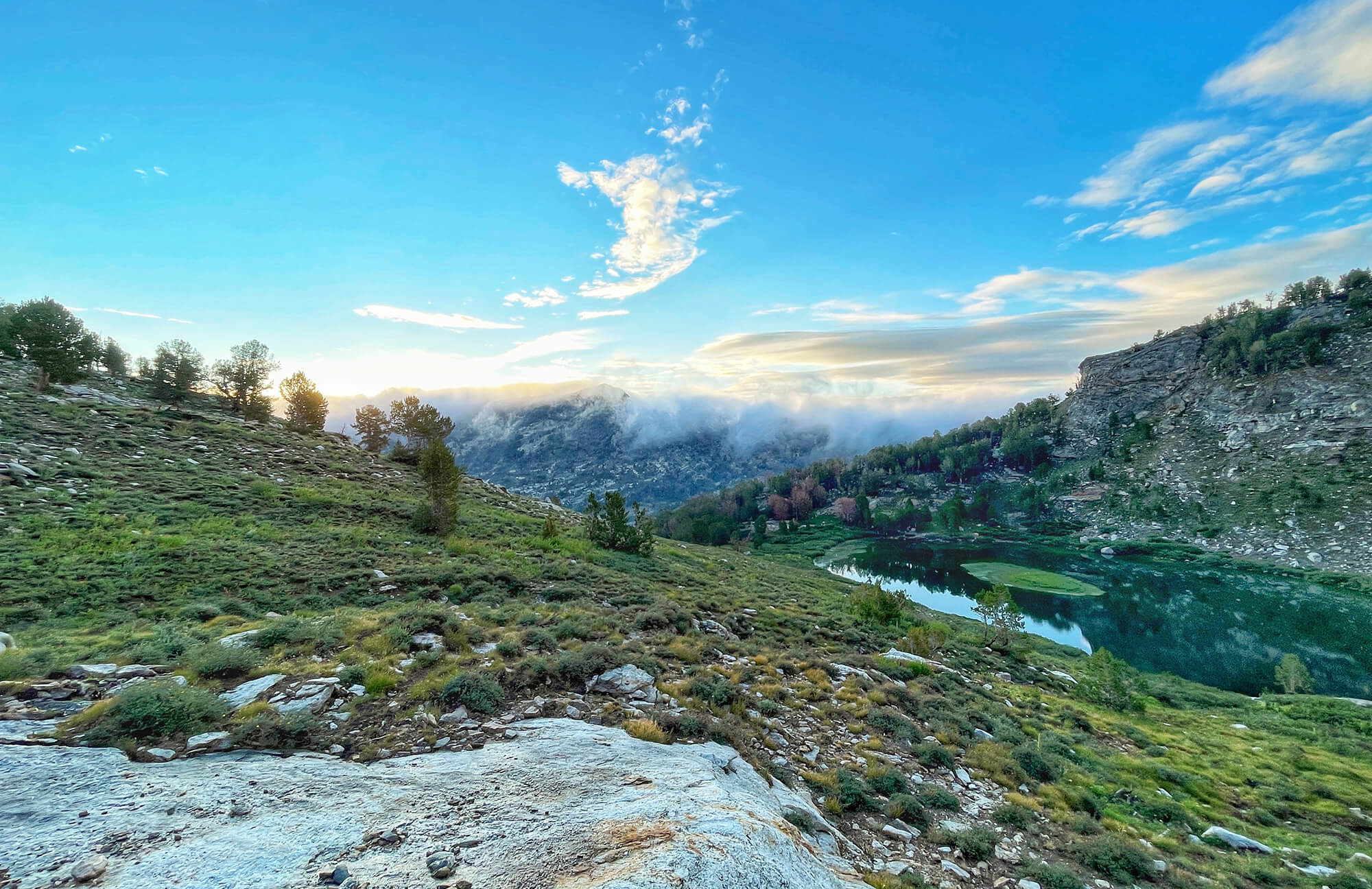 Island Lake at Sunrise
On top of seeing the main target for the tour, the skies had mostly cleared and it was a beautiful morning in the Ruby’s.

After spending several hours on the slab we decided it was time to head back to town. On the way out, a Prairie Falcon flew over and landed in a dead snag across the tiny valley from us. Meandering down the trail we were treated to a trio of my favorite mammals here: Yellow-bellied Marmot, Golden-mantled Ground Squirrel, and the always a crowd pleaser American Pika. 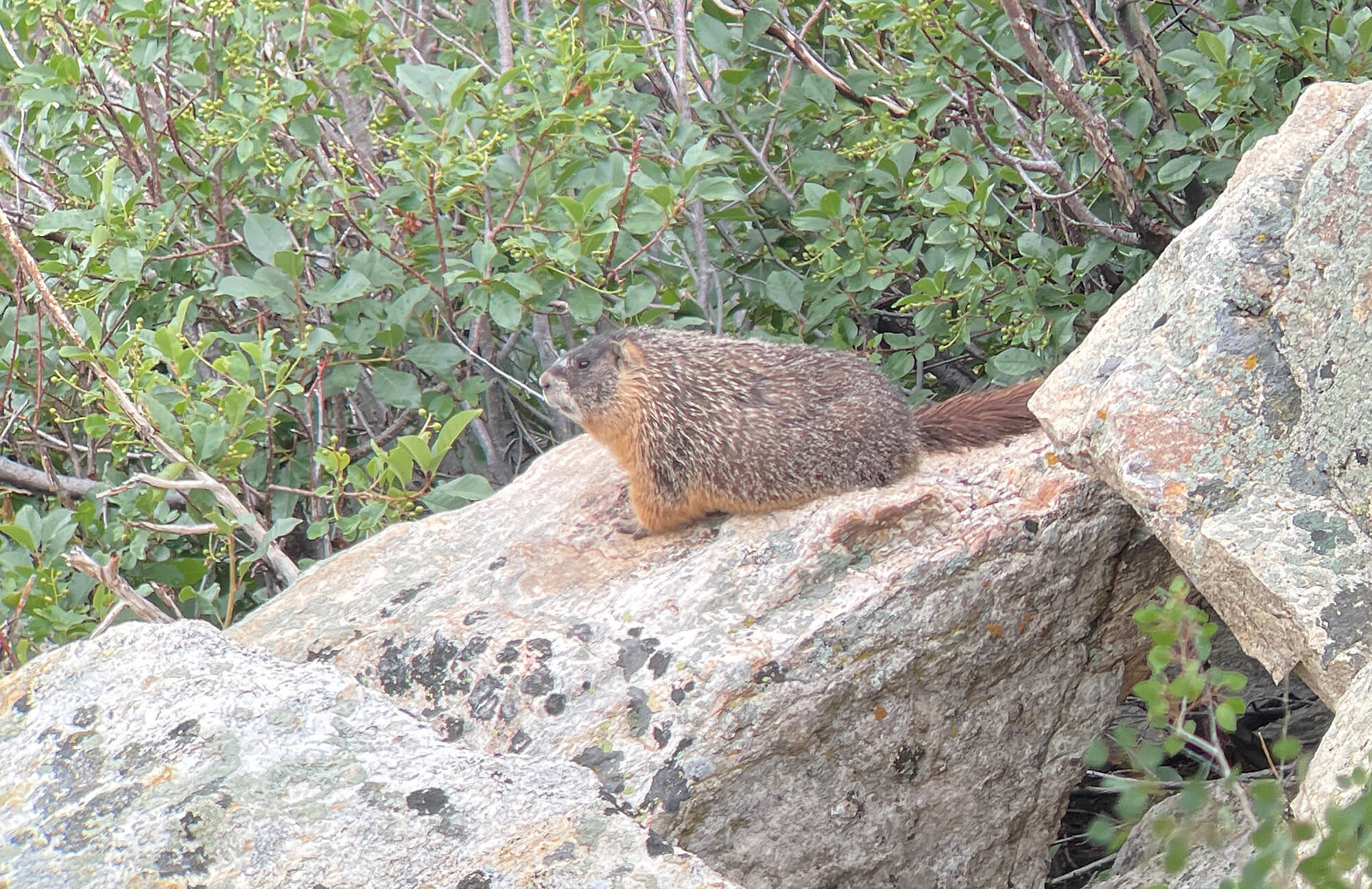 Yellow-bellied Marmot lounging on a boulder 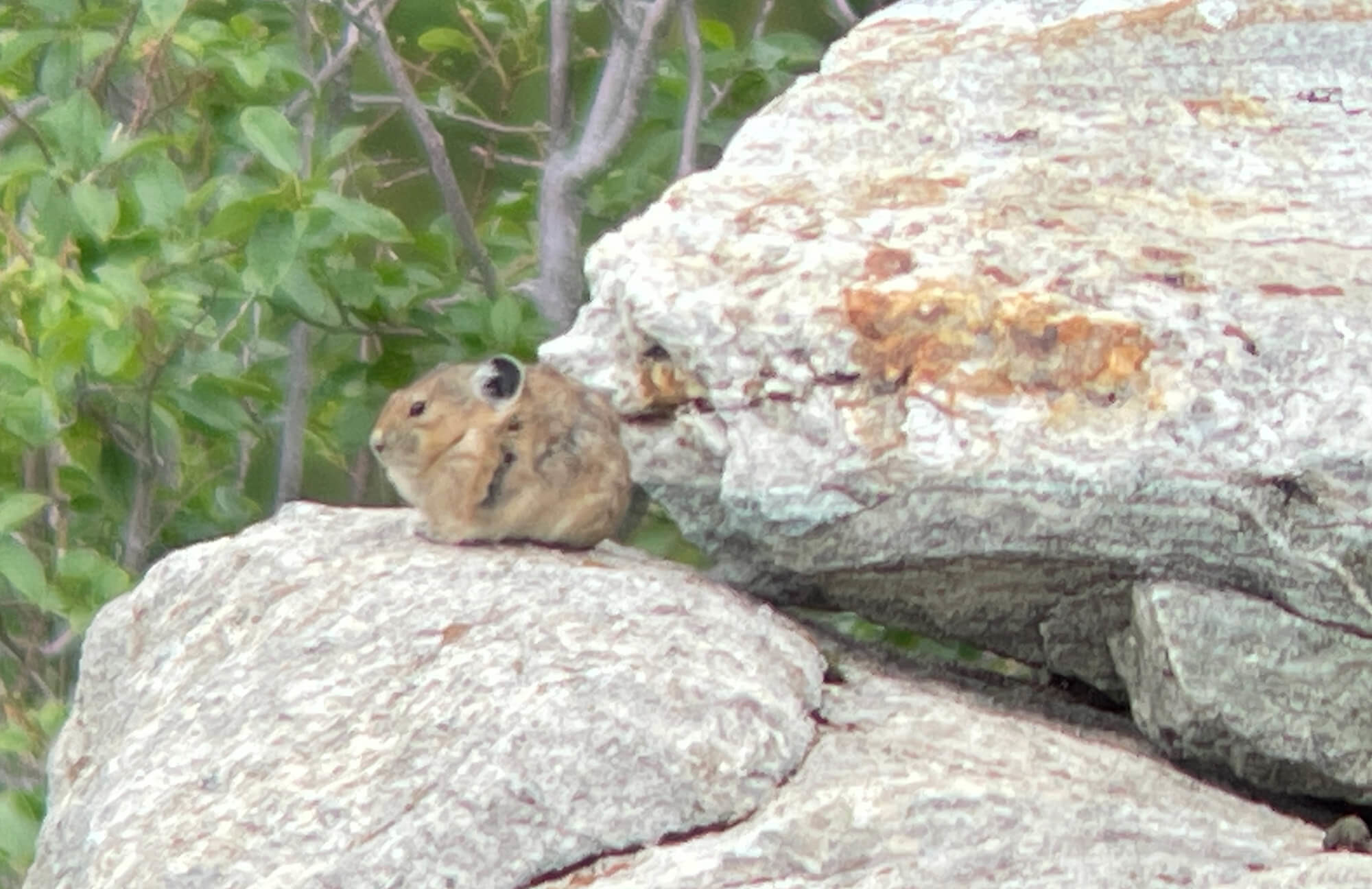 American Pika keeping a watchful eye on us 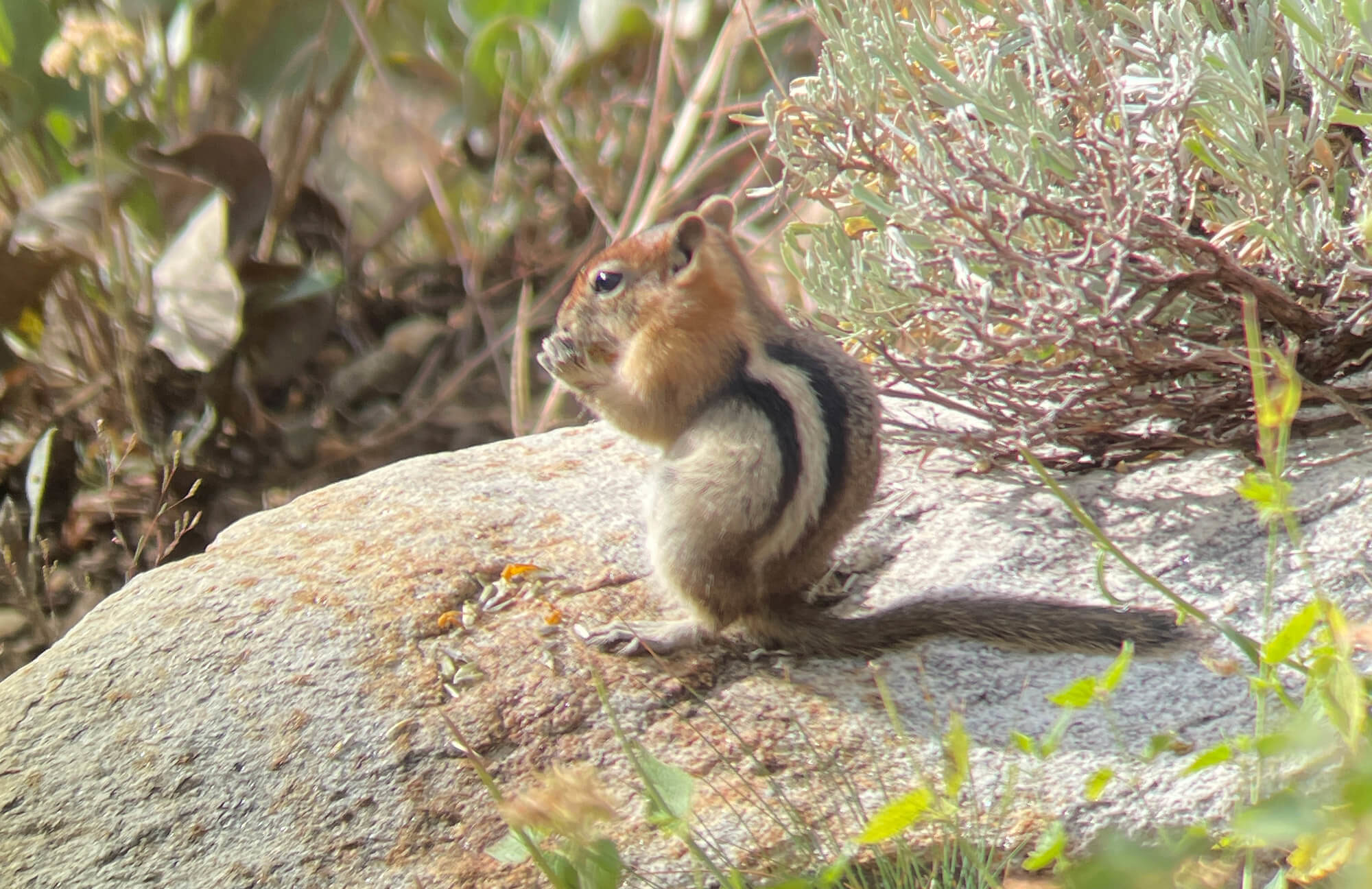 Golden-mantled Ground Squirrel having a nibble
On our way out of Lamoille Canyon we made a quick stop to pick up Lewis’s Woodpecker for the tour, then headed back to Elko. The plan was lunch to go from my favorite spot in town—unfortunately there had been some miscommunication between the owner and her staff and at the last minute they told us they couldn’t handle our large group as planned. It was disappointing, but luckily another local dive saved the day and was able to seat our larger group immediately. Big props to Odeh's Mediterranean Restaurant where I’ve eaten several times before. Aside form the gracious staff at this family-owned business, the food is fantastic!

While large birding groups can often cause logistical issues, the pandemic really showed how many local restaurants struggled to maintain normal hours, with short staffs, and lots of people trying to get out and make up for the year lost. Prior to 2021 we had never run into any issues with restaurants, but it was apparent the toll for the pandemic was taking on small businesses!

While we typically try to get out for some birding in the evening—due to the logistical issues at lunch we wanted to make sure we had a smooth dinner so we skipped birding, had a great dinner at Luciano’s and that was the day! 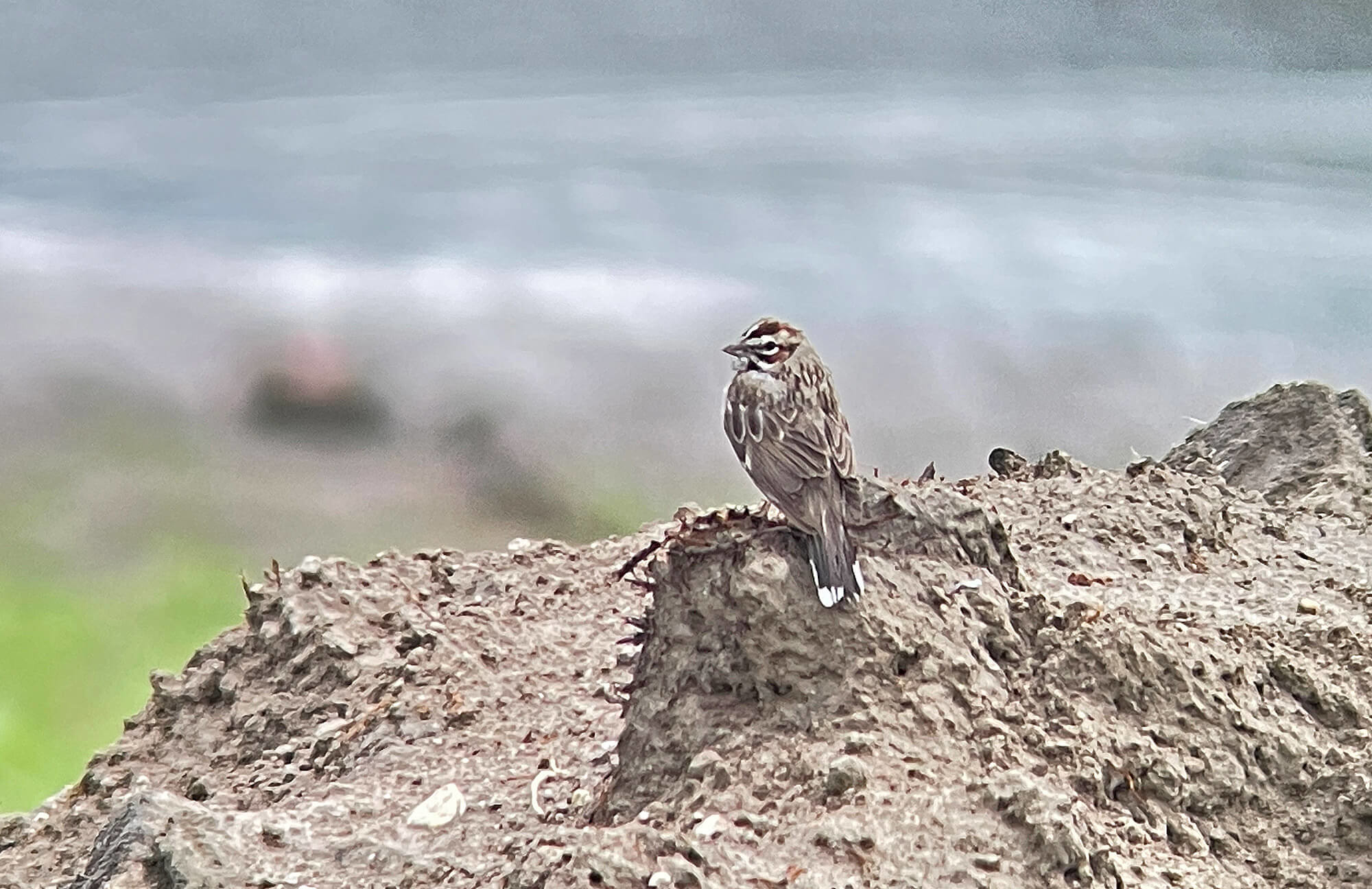 Digiscoped Lark Sparrow
Overnight it rained again—and continued into the morning. Luckily for us but the time we reached our morning birding destination at South Fork the rain had subsided in the valley—but we could see it continued over the Ruby’s. South Fork was its usual, incredible, hotspot. We tallied a whopping 64 species here as we spent the morning canvassing the entire lake and surroundings. 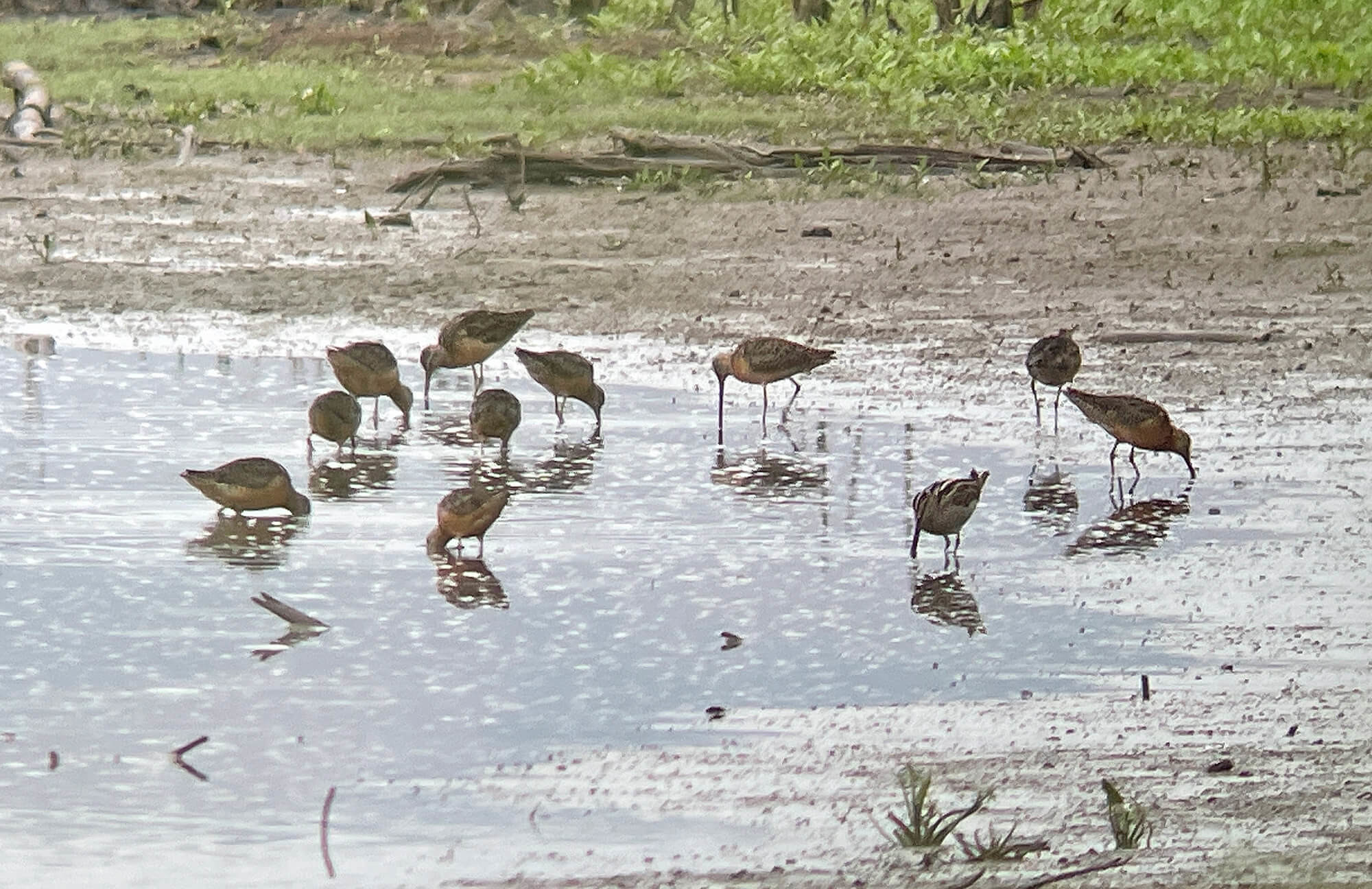 Wilson's Snipe with Long-billed Dowitchers
Loads of waterfowl, waterbirds, and shorebirds made for a lot of scoping. Clark’s Grebe and Western Grebe, American Avocet, Wilson’s Phalarope, Red-necked Phalarope, Semipalmated Plover, and Lesser Yellowlegs were some of the highlights. 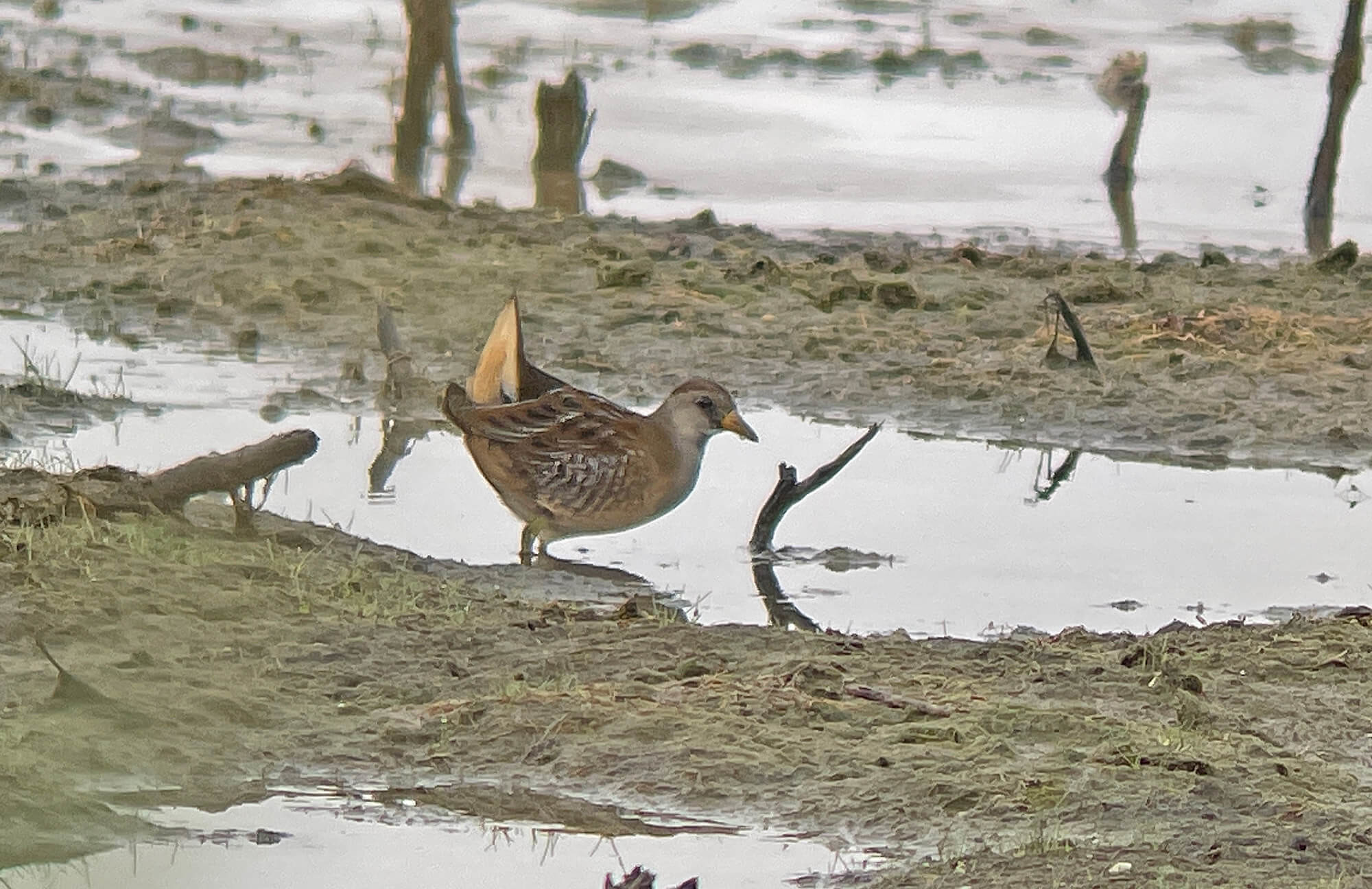 Digiscoped Sora
Near the campground on the west side of the lake we had 3 Sora feeding in the open in a nearly dried up canal—great looks as the birds didn’t seem to mind the crowd gawking. Eventually we wrapped things up and headed back towards Elko, making a stop in a juniper patcher near town. While there weren’t any out of the ordinary birds, we did pick up a few things like Western Tanager and Bullock’s Oriole, in addition to Northern Mockingbird and Blue-gray Gnatcatcher.

Back in town we managed to get everyone packed and were finally able to grab that delicious lunch we expected the day before. We dined at the city park and then hit the road back towards Utah. A quick stop just over the border and we added Snowy Plover for the tour, before continuing back to Salt Lake City and dropping everyone off at the airport or nearby hotels.

A huge thanks to Taylor, and Adam from Georgia Audubon, for co-leading this tour. The more guides the merrier, and with 3 sets of eyes on the lookout we definitely picked up a few more birds than usual! Upon arriving back in Utah I received a DM asking about the mudslides in Lamoille Canyon. I quipped that it wasn’t a big deal, they had cleared the road and we were good. Then the message included a link to a news article. On Sunday, the day after our tour more than a dozen mudslides caused massive damage to the road. The canyon was closed and they had to help get people out of the canyon. The road stayed closed for more than a month while they cleared debris, and made sure the road was safe to use.

Because of this, my last 2 tours to Elko for the summer were cancelled! A friend of mine on the mountain that Sunday said the following to me in a message, “Island Lake was scary with the rain and hail”… They had gotten off the mountain before the landslides and had no idea what had transpired. The good news is that the canyon is once again open to the public, and we should be good to go for 2022!  This was the first time we had ever encountered sketchy weather in all my tours to Nevada and isn't expected normally.
Photos from this Tour:
View the Photos
Georgia Audubon Photos from this Tour:
View the Photos
Birds Seen on this Tour:
View the Checklist