It’s always a thrill when a client reaches out with a small and specific target list, that also is a bit of an adventure.  As was the case with John and Ellie who reached out in 2019 and planned a tour with me last summer.  Of course, Covid put the brakes on that, so we rescheduled to this summer to try again.  This tour was focused on just 2 species—Cassia Crossbill and Cassin’s Vireo.  The remaining 2 breeding ABA (not including Hawaii) species my client needed.  I knew the crossbill would be a piece of cake, even if we had to spend a little time searching.  The vireo however had been a little nervous.  I had only been to the area one time, years ago, and got them without issue, but I had never been in mid-July, and there was very little sighting data for that time of year…

We kicked things off bright and early in Salt Lake City on Thursday, July 8, picking ups John and Ellie for our 3.5-hour drive to the South Hills in Idaho.  Taking a queue from my previous tour, we stopped at Magic Mountain Ski Area and didn’t quite have the same experience as 2-weeks prior.  We did get a Red Crossbill, but not the expected endemic.  After the short vigil here, we headed to my tried and true location near Diamondfield Jack Campground.  We spent the next hour enjoying various species, including Western Tanager, Hermit Thrush, Hammond’s Flycatcher, and of course, the star of the show—Cassia Crossbill. 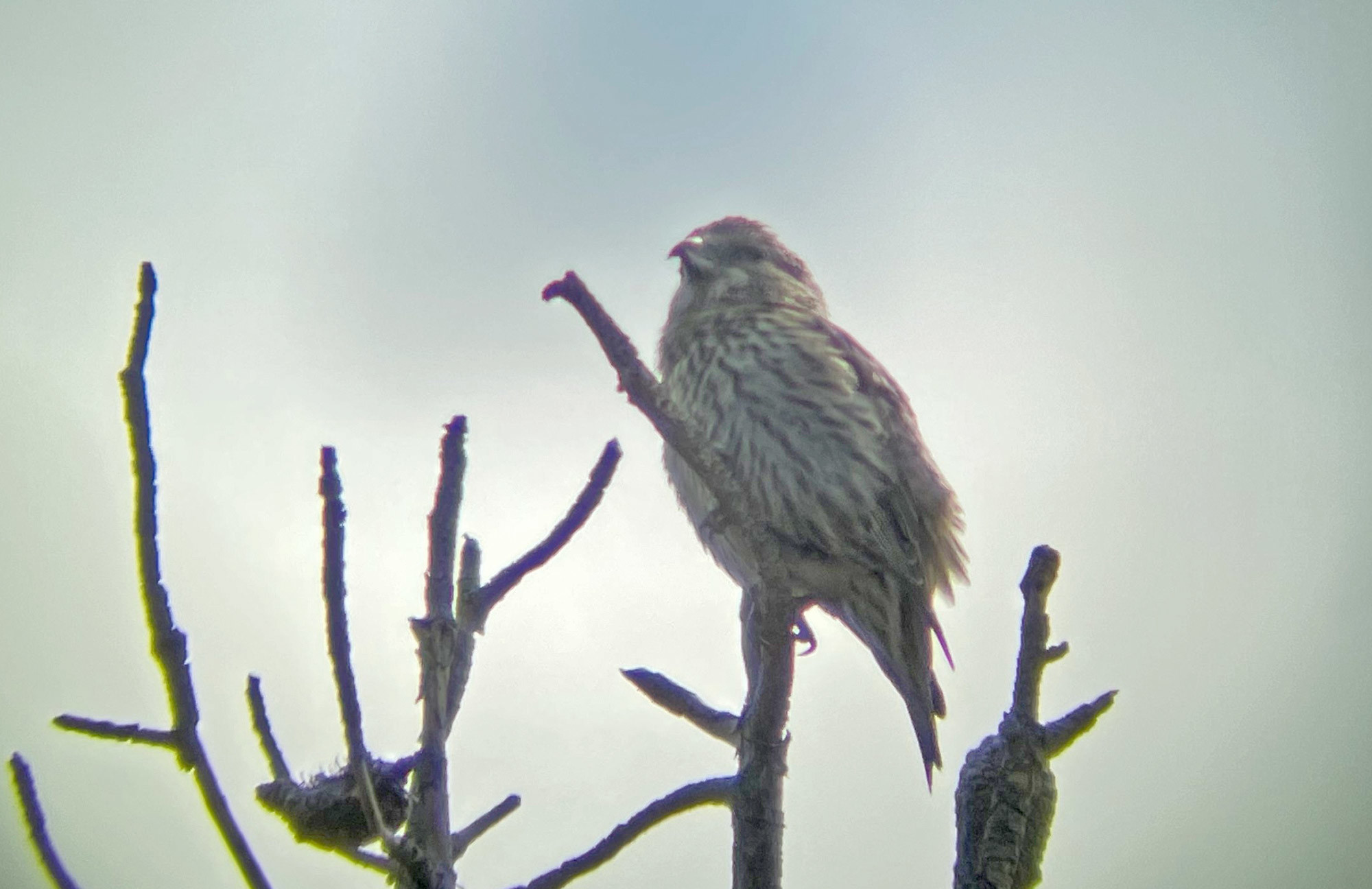 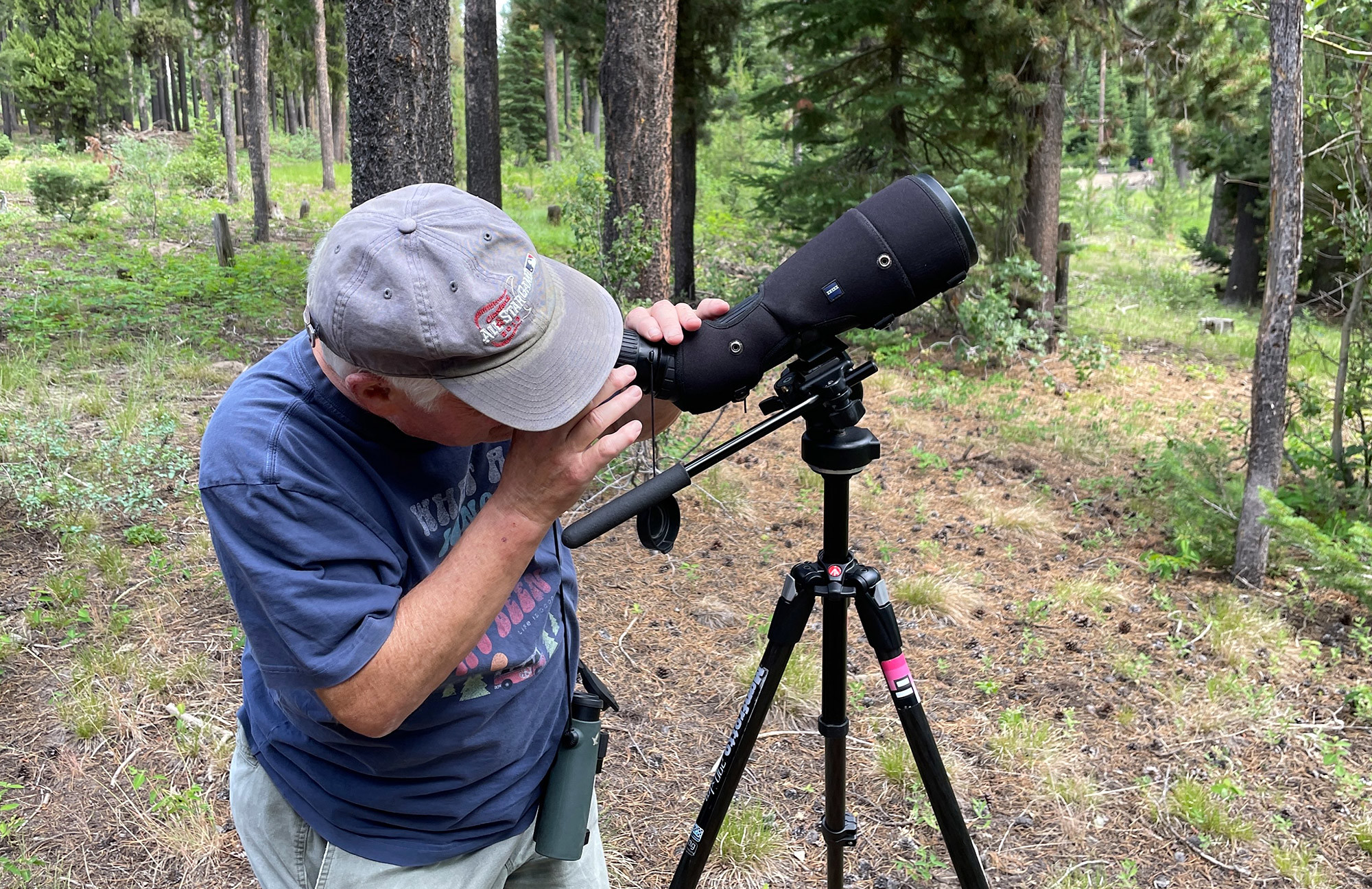 John getting ABA lifer Cassia Crossbill
After the crossbill, the rest of the day was a breeze. We had a picnic lunch at Porcupine Springs, before spending a little more time at Magic Mountain.  En route to Brockman’s, we had 4 Lewis’s Woodpeckers at the burn trail, on what was a warm and considerably quiet afternoon.  At the feeding station, the usual buzz of Black-chinned Hummingbird and Broad-tailed Hummingbird was highlighted by 3 male Calliope Hummingbirds that put on a nice display. 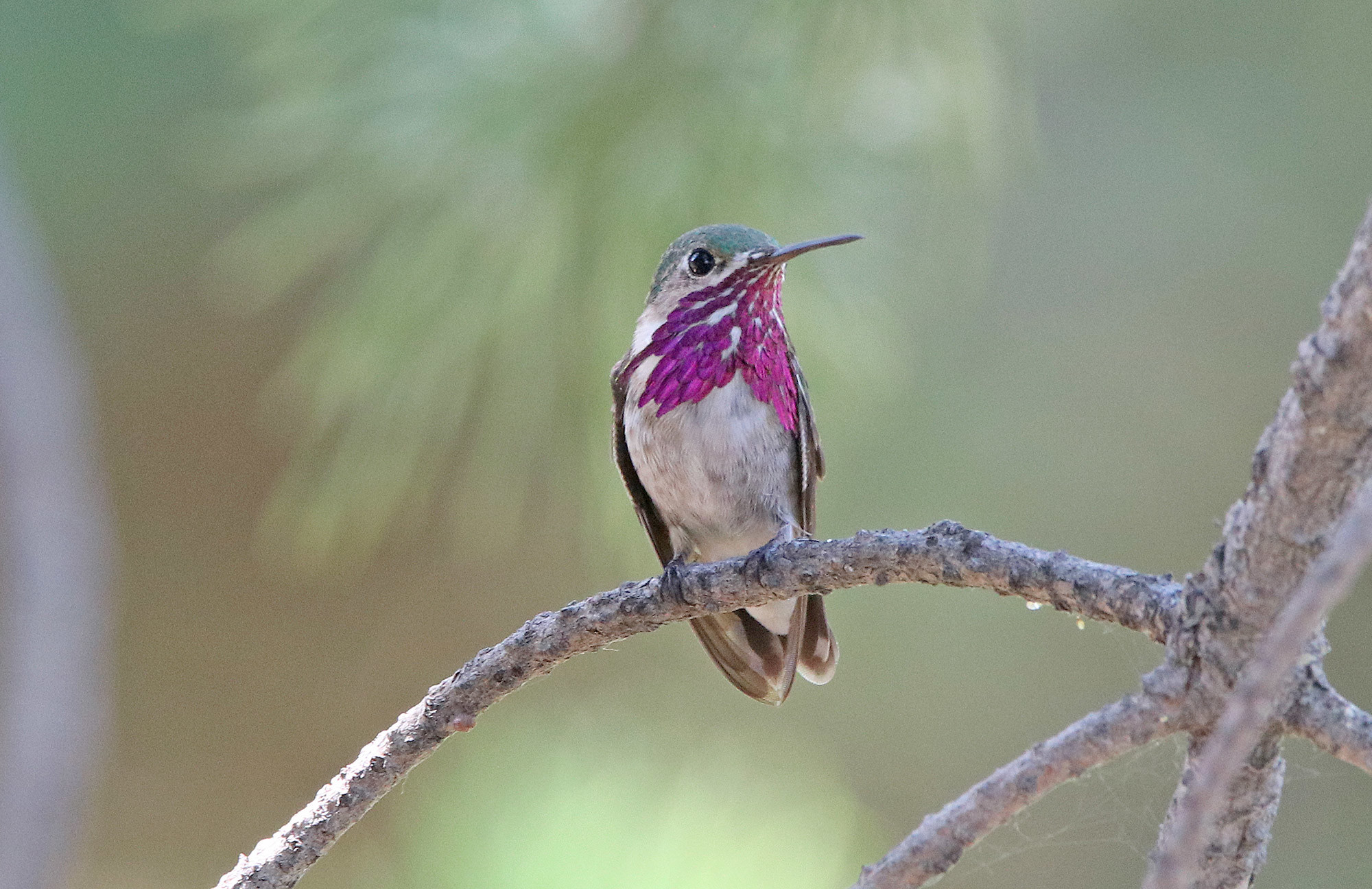 Calliope Hummingbird striking a pose
We wrapped up the day with a short afternoon break and dinner before calling it a night.  On Friday we started the morning out in the fields south of town. This morning was one of our Gray Partridge success stories for the summer when a flock of 14 birds scurried across the road in from of us then flushed showing off those gorgeous rufous tails as they came to land in the tall grass in a nearby field! 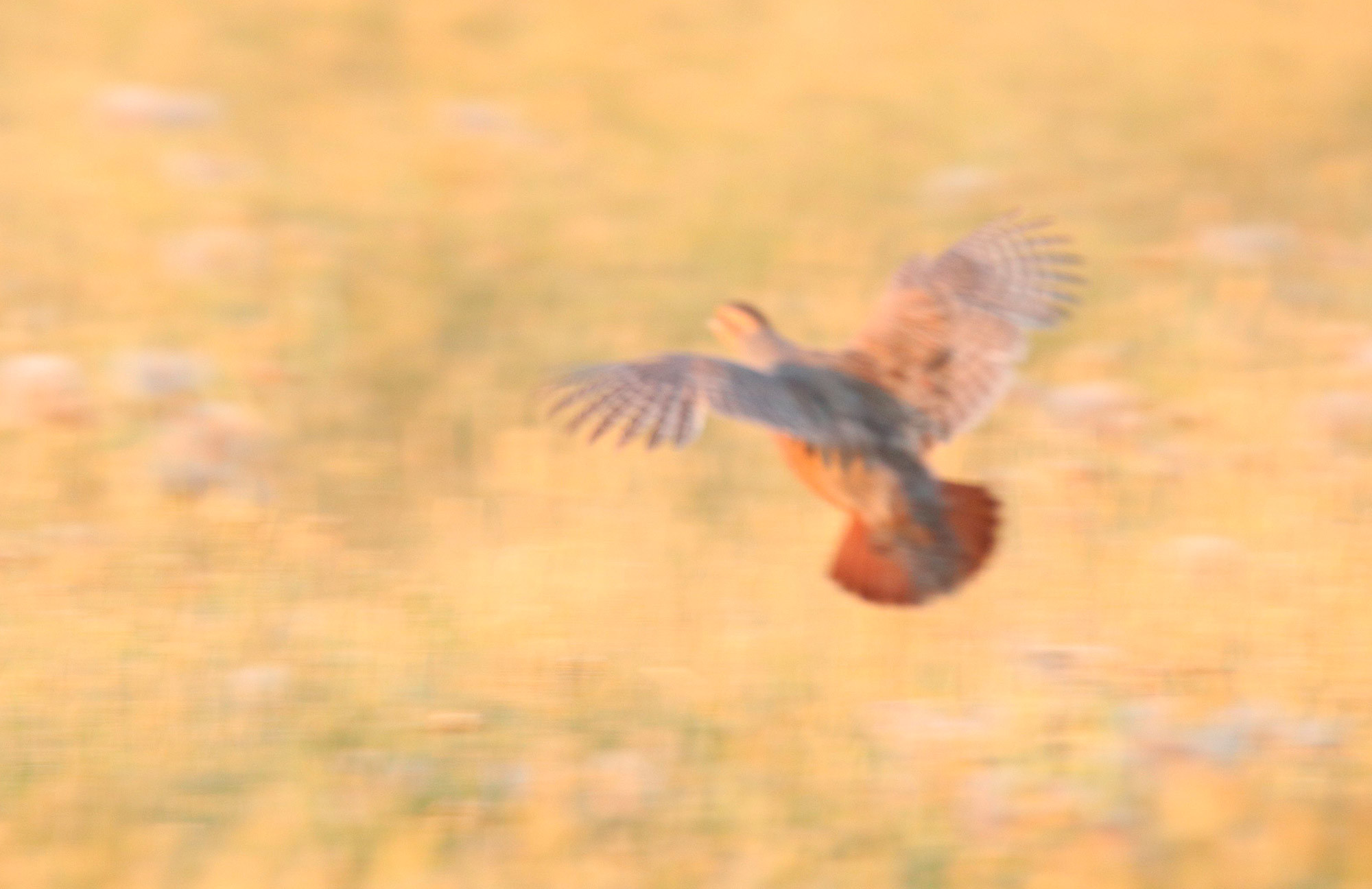 Not my best shot of a Gray Partridge
We also had our usual bevy of Barn Owl, Burrowing Owl, Swainson’s Hawk, and Northern Harrier to keep things interesting.  No visit to Twin Falls is complete without a stop at Shoshone Falls Park, so we made the most out of the morning and birded the area thoroughly.  Both Rock Wren and Canyon Wren were quite cooperative, while numerous Yellow-breasted Chat and Bullock’s Oriole punctuated a very different visit than my previous tour here. 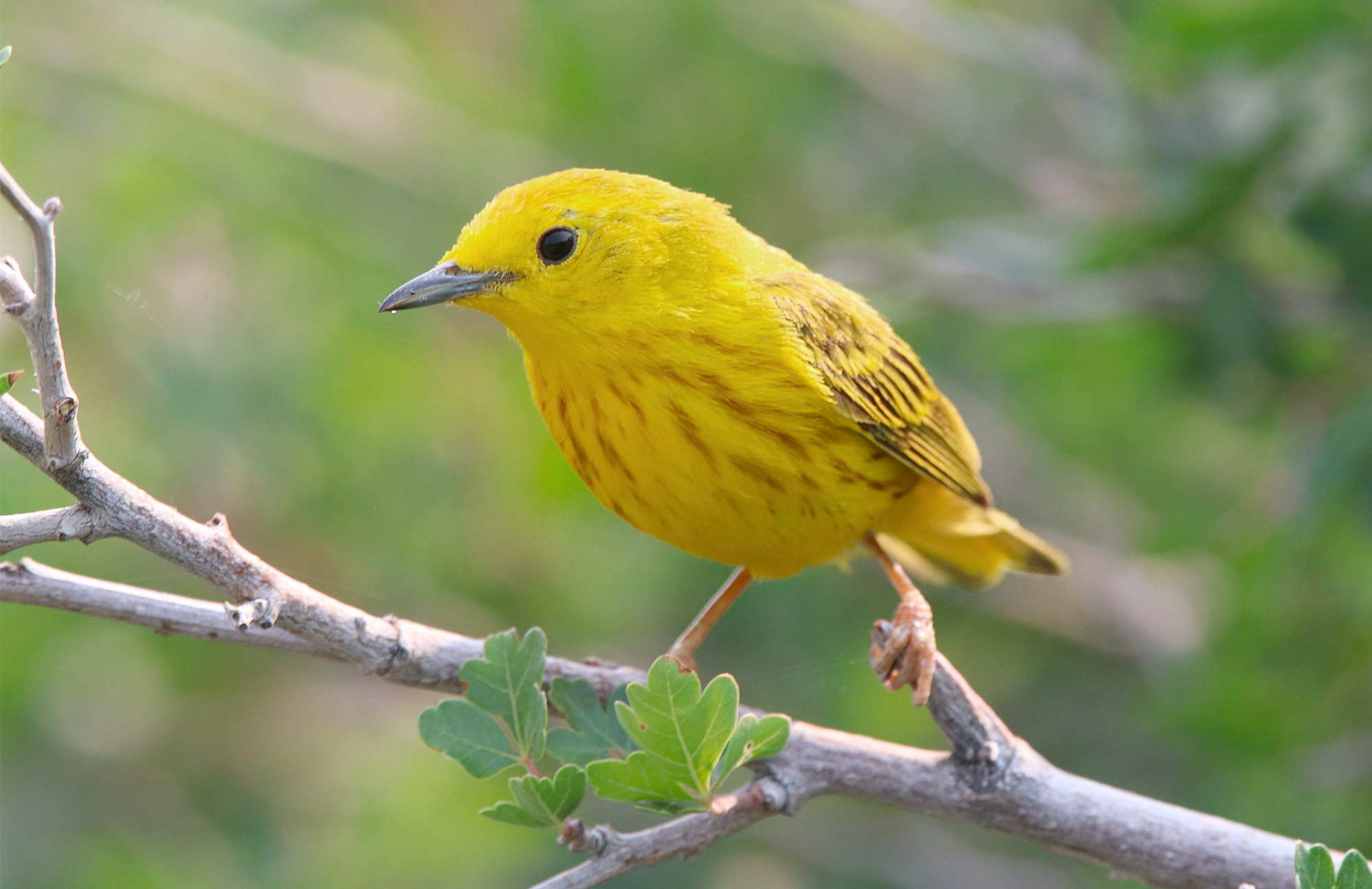 A stunning Yellow Warbler
The birding was phenomenal this morning and wrapped up our time in Twin Falls nicely. And even though not all the birds are specialties, even the common stuff like Rock Pigeon can be really stunning given their surroundings! 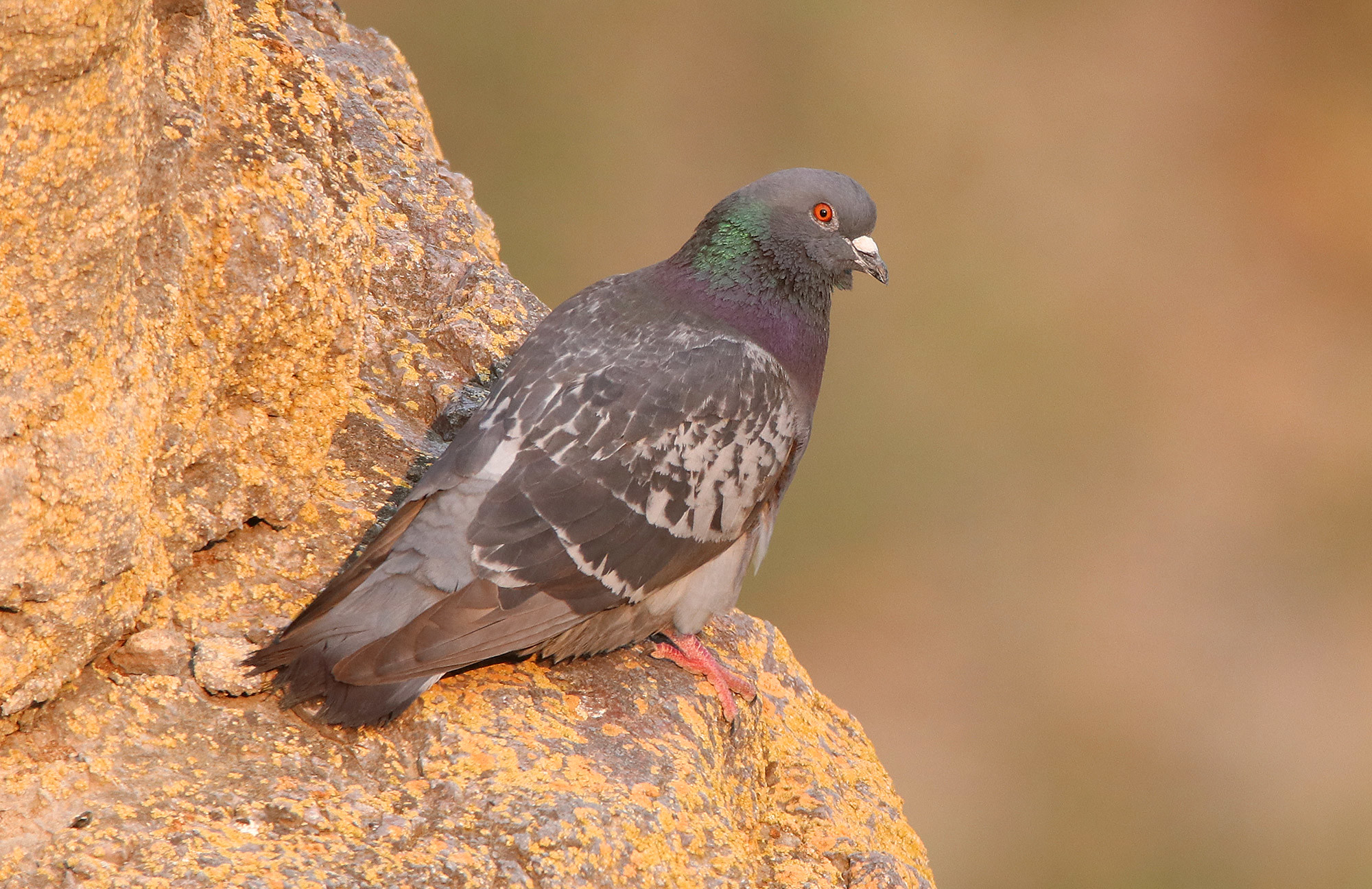 Rock Pigeon in some "native" habitat
From Twin Falls it's about a 90-minute drive to the foothills of Boise where we would start our climbing the mountains east of town.  A forest fire that started a few days earlier had turned the skies grayish-brown with haze, and the summer heat made for a very warm afternoon.  The drive to Aldape Summit only took about 35 minutes, with numerous stops in scrub oak and mixed woodland to try for the vireo.  We heard lots of vireos but they were all Warbling Vireo!  We also had lots of nice looks at Lazuli Bunting.

At the area near the summit, we parked and began checking a few spots.  It was hot, windy, and not a whole lot was out in the way of birds.  We eventually found a few Western Tanagers and had all but given up hope on the vireo for the day when I decided to try a Blue-headed Vireo scold call on a whim.  Much to my surprise, we watched as a Cassin’s Vireo shot in form across the canyon and landed at eye-level in an enormous pine tree right next to us.  The bird quickly realized we weren’t another vireo and went about its business.  This was the final continental breeding ABA lifer for John and a successful sweep of the targets for the tour! 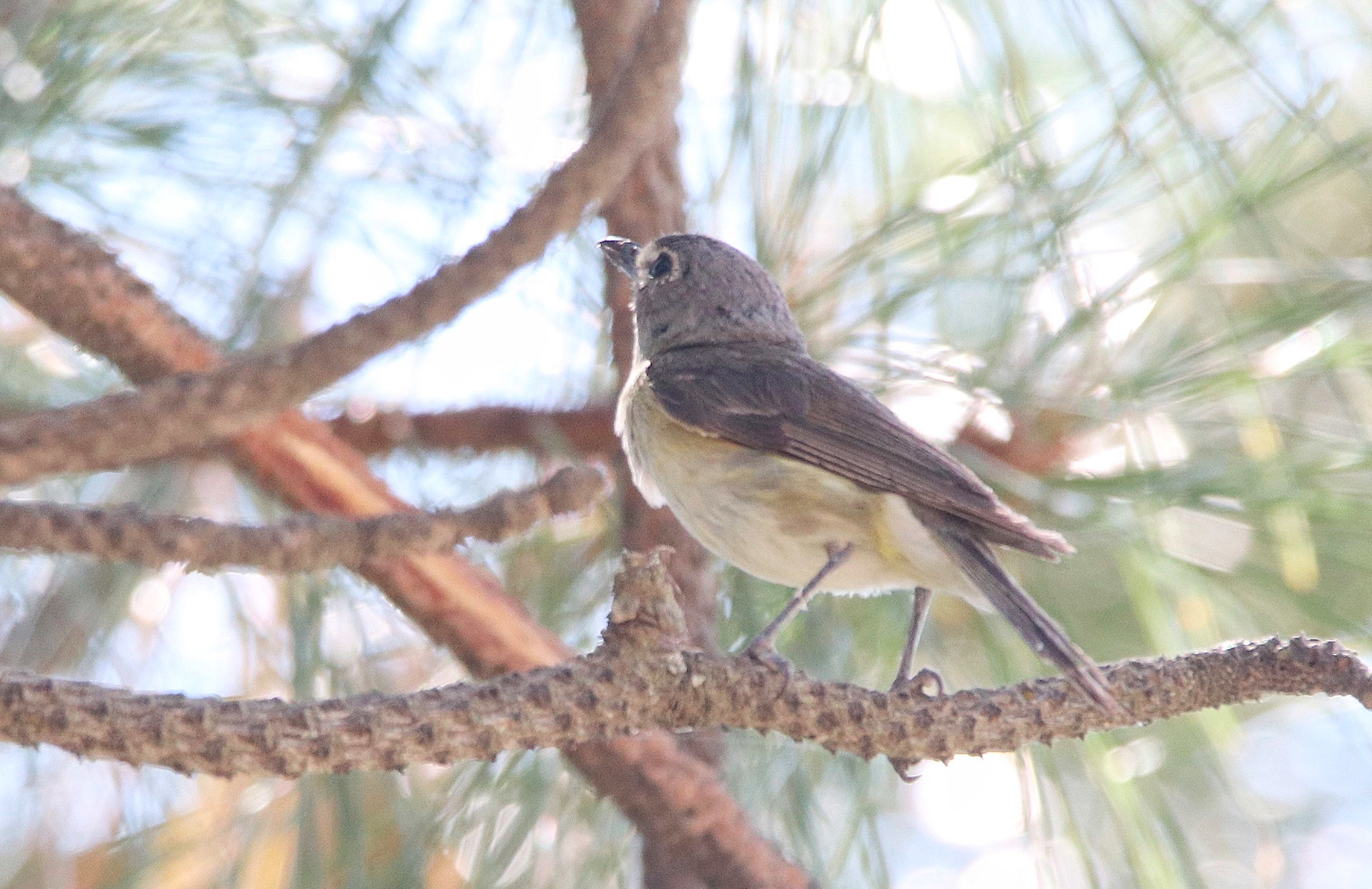 Cassin's Vireo deciding it was done with being watched
We had planned on making another try for it the following morning but ran into a small car problem after the vireo.  Our loyal van Otus was feeling overworked in the heat and with the steep climb to elevation.  The engine overheated and if we hadn’t been facing downhill, I’m not sure how long we would have been there before the van cooled enough to let us coast downhill.  Erring on the side of caution we opted not to head back into the mountain the following day.  That evening I offered an owling outing, but after a great meal in downtown Boise, we wrapped things up for the night.

On Saturday morning we rose early so we could bird our way back to Salt Lake City.  We made the most out of being in Boise and checked out Kathryn Albertson Park along the Boise River Walk.  The highlight of a July morning here was 12 Wood Ducks and an early migrant Orange-crowned Warbler. 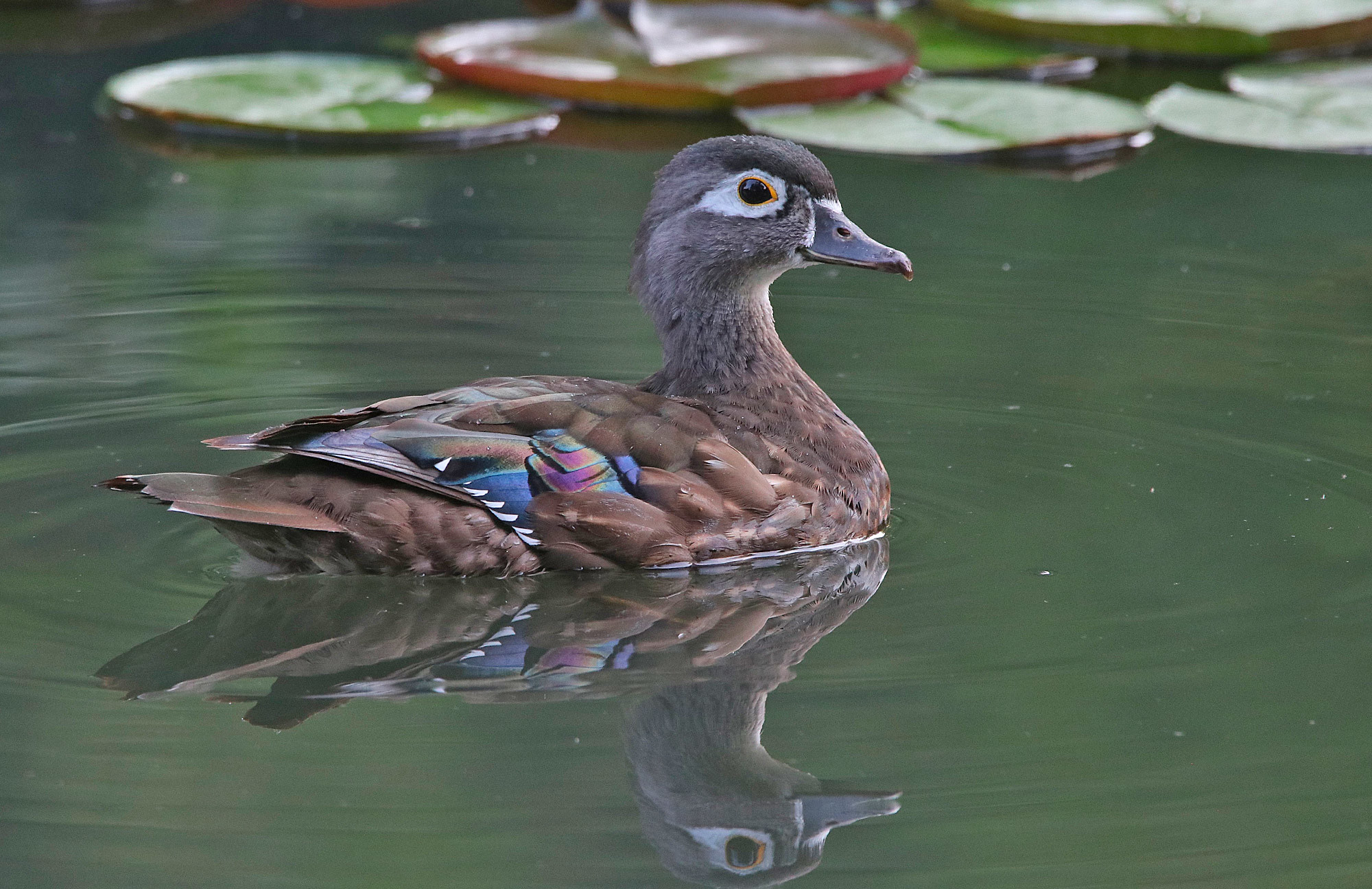 Wood Duck in a beautiful scene
It was a beautiful morning to spend walking through the park and even with low overall bird density, we had 25 species in an hour birding. 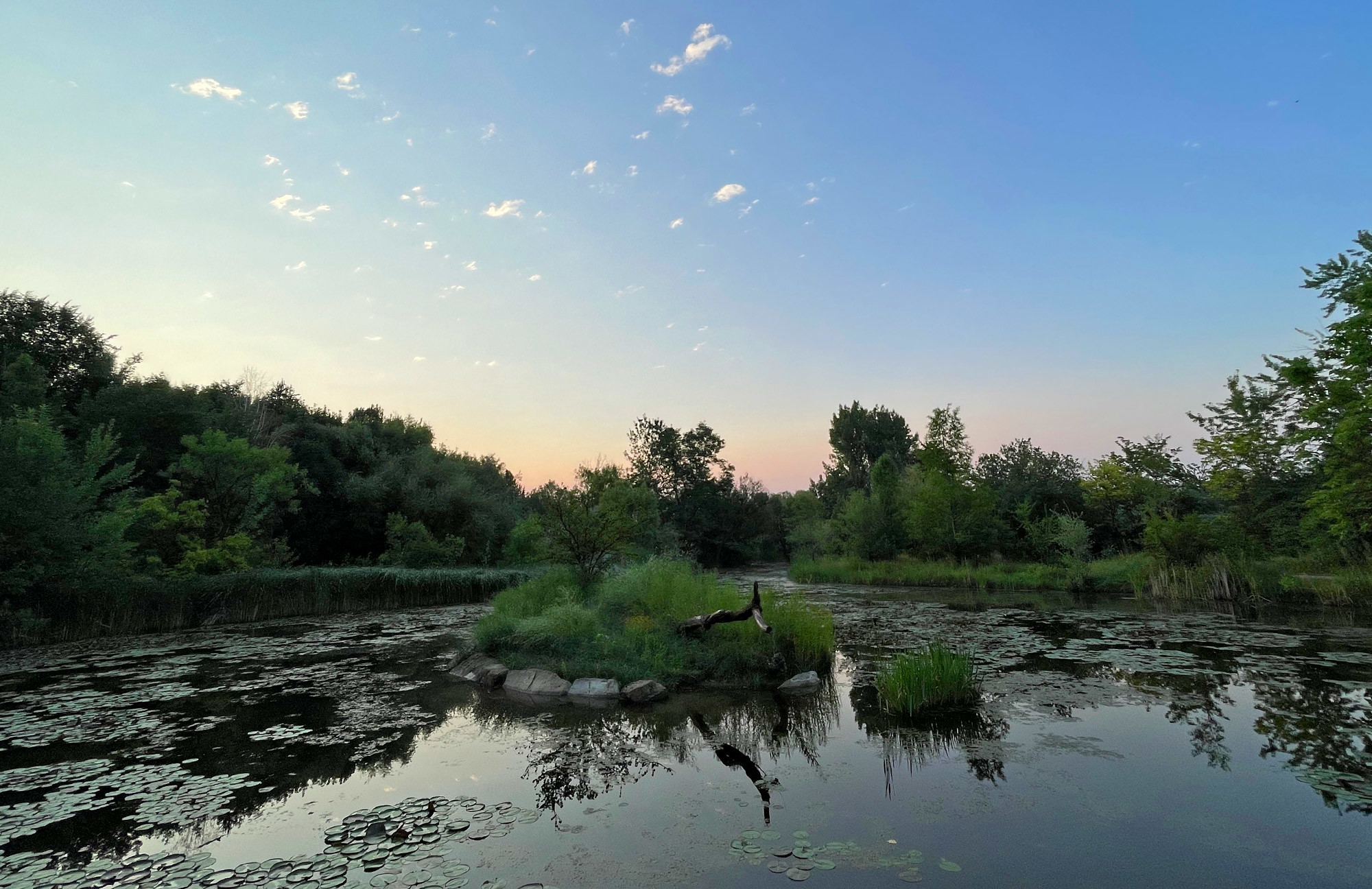 Sunrise over Kathryn Albertson Park
Starting our journey south we stopped at Indian Creek Reservoir in the middle of nowhere and had a field day with the migrant shorebirds and breeding waterbirds.  9 species of waterfowl including Blue-winged Teal and Cinnamon Teal, Ruddy Duck, and Northern Pintail were all highlights.  Shorebird wise we had Western Sandpiper, Long-billed Curlew, Long-billed Dowitcher, Wilson’s Phalarope, and several other common species.  While the lake here was nearly dried up, the mere presence of water attracted tons of birds, and we had 37 species during our short visit.

Back in Utah, we made a stop at a local wildlife management area just outside of Salt Lake City.  As usual, this stop padded our trip list with a number of new species.  Highlights included a Ring-necked Duck that had been present all summer, a migrant Solitary Sandpiper,  14 Greater Yellowlegs (starting to build up before heading south), several Sora, a Virginia Rail,  Neotropic Cormorant, and the usual Western Grebes and Clark’s Grebes. 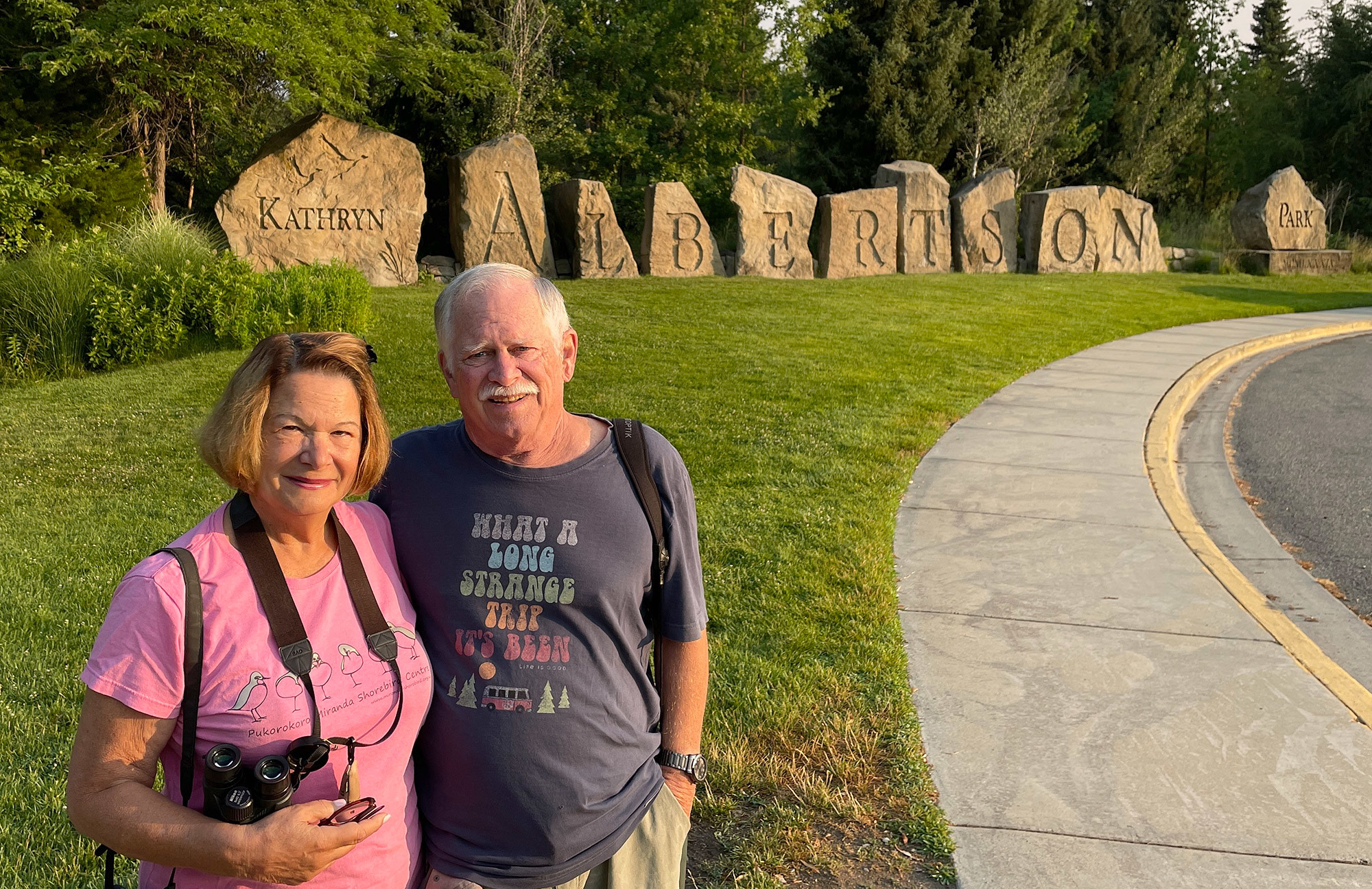 John and Ellie at Kathryn Albertson Park
Despite this being a quick, 3-day tour that mostly focused on Southern Idaho in July, we ended up with 125 species, and most importantly a pair of happy clients that got their targets!  I really enjoyed this custom tour and was very pleased with our outcomes!
Photos from this Tour:
View the Photos
Birds Seen on this Tour:
View the Checklist