May 16, 2021 - From Farmington, Utah
In May 2019 we wrapped up our 12th straight year of offering Marathon Birding during the Great Salt Lake Bird Festival. Weather and migration lulling led to our lowest total since 2012—we hit 151 species (149 in eBird, not sure what species we missed on the checklists!), which is a great day of birding, but well below our running average of just over 160 for the previous 6 years. The plan was to roar back in 2020, get back into the 160s and keep chasing our all-time high of 170 from 2015. Alas, Covid-19 shut the world down, the Great Salt Lake Bird Festival was canceled, and Marathon Birding would have to wait until 2021 (we hoped).
When the festival committee started planning for the abbreviated 2021 festival, much of the United States was still in full-on crisis mode, as the pandemic raged. We were optimistic that vaccines and the passing of winter would lead to a climate where we might be able to offer our tour again. With that in mind, we came up with a strategy to allow us to operate in some capacity unless things were still out of control. 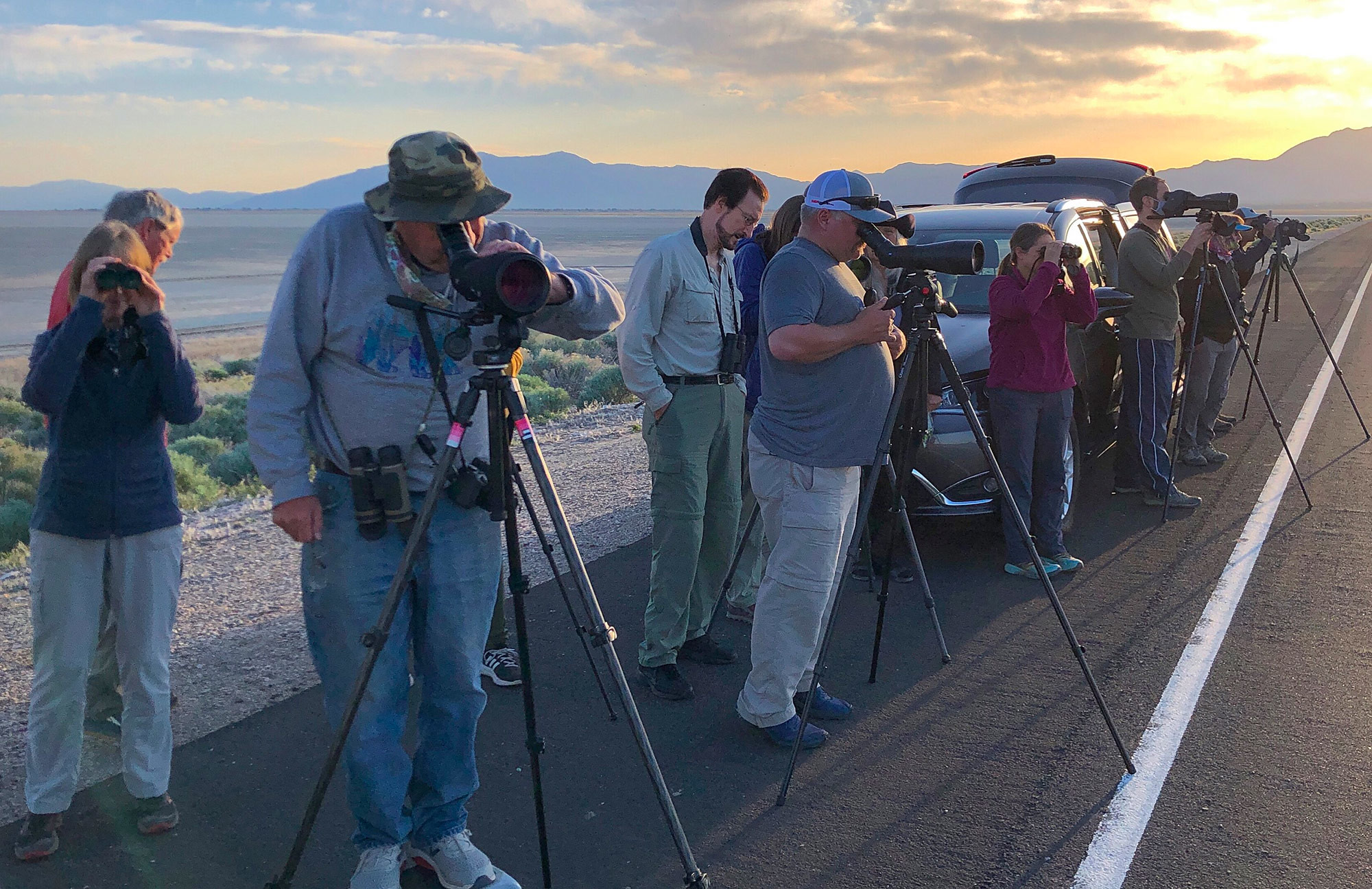 The Marathon Birders starting the day off on the Causeway

As luck would have it, the vaccine rollout was a success, and the pandemic waned in America during the spring. In March when the festival opened for registration, we filled our 10 spaces within 10-minutes and had a 9-person waitlist by the end of the day. Barring a disaster in the following 7-weeks, Marathon Birding was back in 2021!

All 4 of our guides (Mike, Taylor, Kenny, and me) and all 10 participants were fully vaccinated more than 2-weeks before the tour, and we were one of the few trips during the festival to operate almost normally. We came up with a plan, prepped the group, and at 6:00 AM on Sunday, May 16th, we kicked off our 13th Marathon Birding Tour, with a European Starling as the first bird of the day.

For various reasons, we weren't able to pursue our usual route as planned so we adjusted. Our normal starting location is Farmington Bay WMA, but unable to access the property early this year, we switched things up and headed to Antelope Island State Park. Shorebird migration was quickly on its way to an end, but we still managed to catch 1,000’s of migrating Wilson’s Phalaropes and Red-necked Phalaropes refueling on their way north. The causeway also produced good numbers of Black-bellied Plovers and a handful of Snowy Plovers along with the common fare. We missed a lot of shorebirds we often get, with peeps completely absent this year.

On the island, we found our usual Burrowing Owl, Great Horned Owl, Loggerhead Shrike, Sage Thrasher, Northern Mockingbird, and Rock Wren on the north end, while Chukar eluded us for the 2nd marathon tour in a row. The winter of 2018-19 really crushed this species here and it has been a tough get after sunrise ever since. 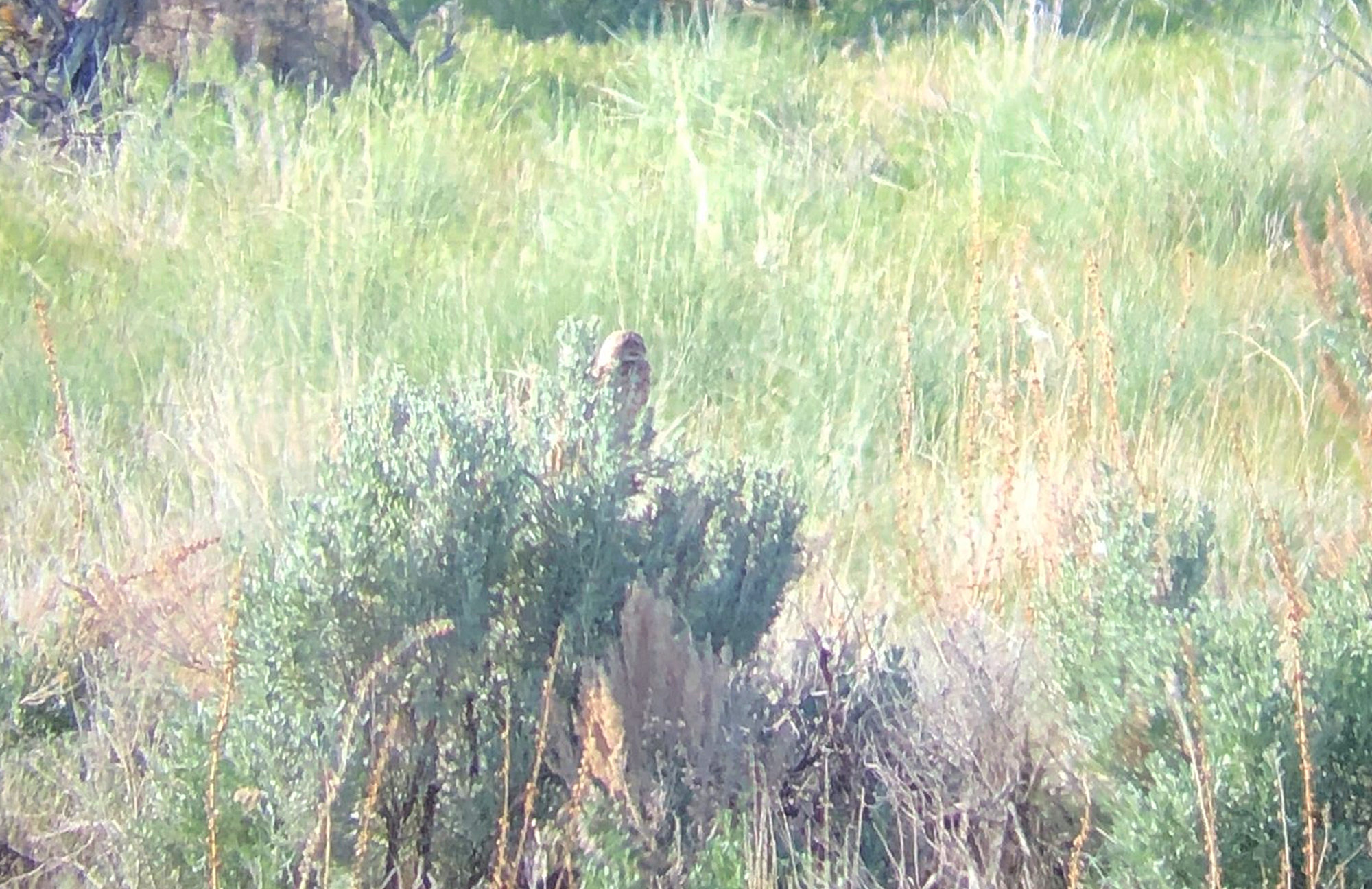 A poor digiscope of a Burrowing Owl

At Garr Ranch, there were enough songbird migrants to keep us busy. We picked up most of the usual migrants including Western Tanager, Wilson’s Warbler, MacGillivray’s Warbler, Dusky Flycatcher, Warbling Vireo, and Lincoln’s Sparrow. Impressive numbers of Green-tailed Towhee and Willow Flycatcher were highlights. 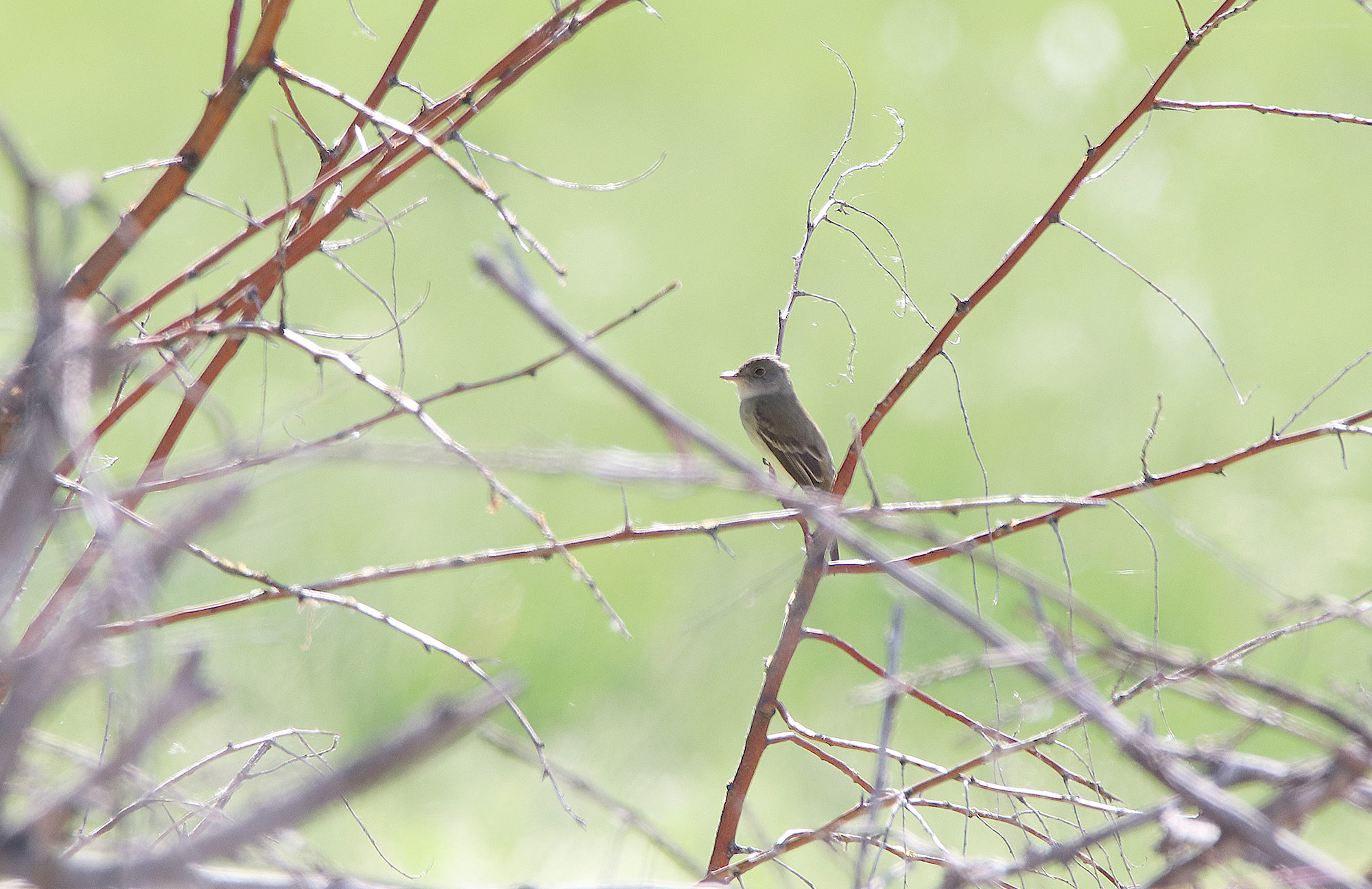 One of a few Willow Flycatcher at Garr Ranch

A pair of Bobolink was a nice pickup that saved us a stop later, and a singing Least Flycatcher in the picnic area was the find of the day. 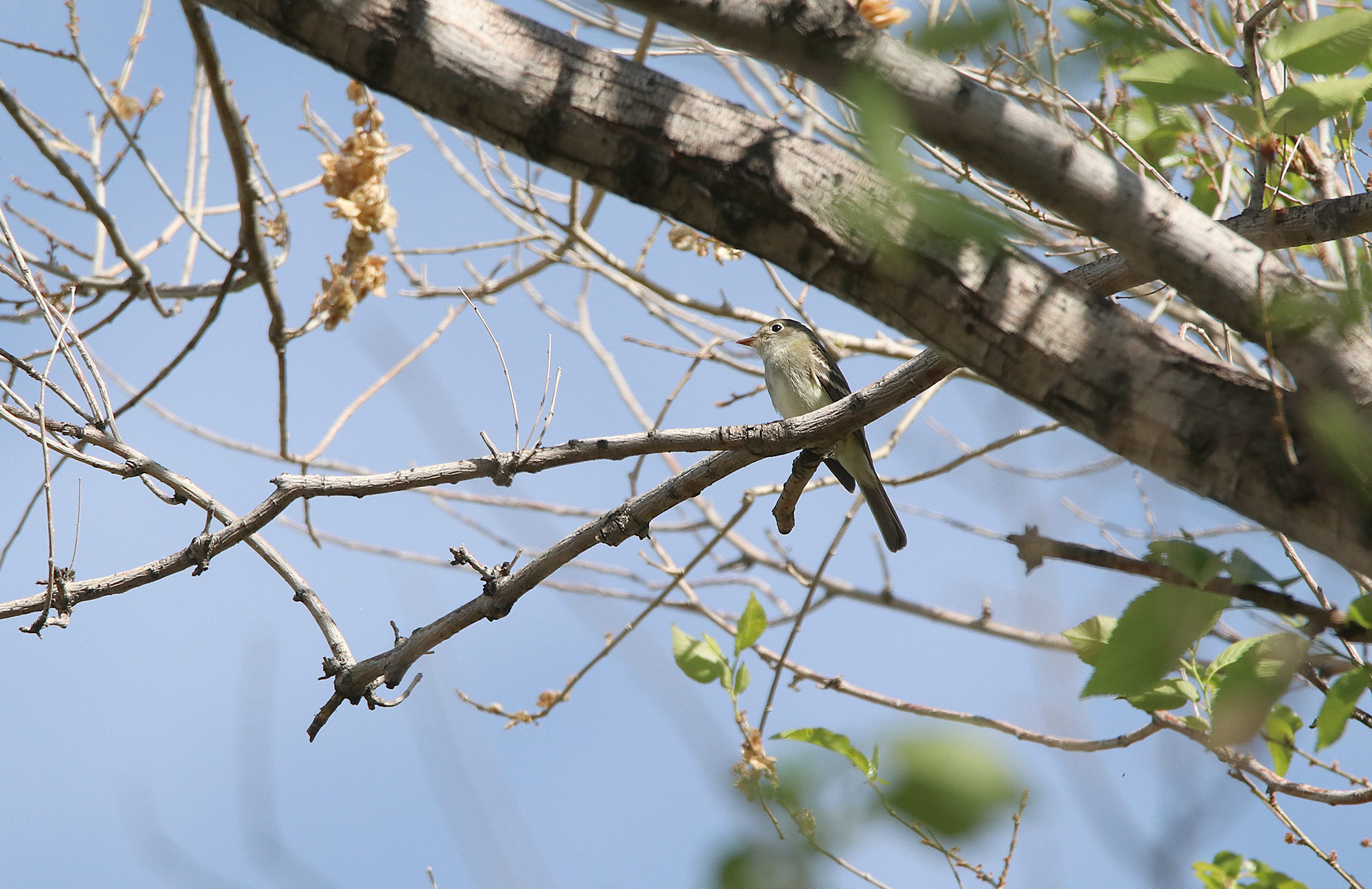 Least Flycatcher was the best bird of the day

We snagged Grasshopper Sparrow on the way off the island, giving us a healthy 90 species before 10:30 am. With Mike and Taylor at the helm, they led us on backroads towards Farmington. In the past, this drive has helped us pick up California Quail (no luck this year), and Great-tailed Grackle, which we had no issues finding at several locations. Our next stop was Farmington Bay WMA where our count hinged on numerous species that can be found here and nowhere else during our day.

Things started off well with Clark’s Grebe and Western Grebe as well as larger divers like Neotropic Cormorant (a staple here now), and American White Pelican. Caspian Tern was a nice addition, as were numerous late migrant Bonaparte’s Gulls. We snagged both Sora and Virginia Rail, as well as Great Egret and Snowy Egret. Waterfowl was a bit of a letdown, but we did get Redhead, American Wigeon, and Blue-winged Teal. Of the 53 species we tallied here the best birds, by and far were 17 Stilt Sandpiper mingling with hundreds of Long-billed Dowitchers. 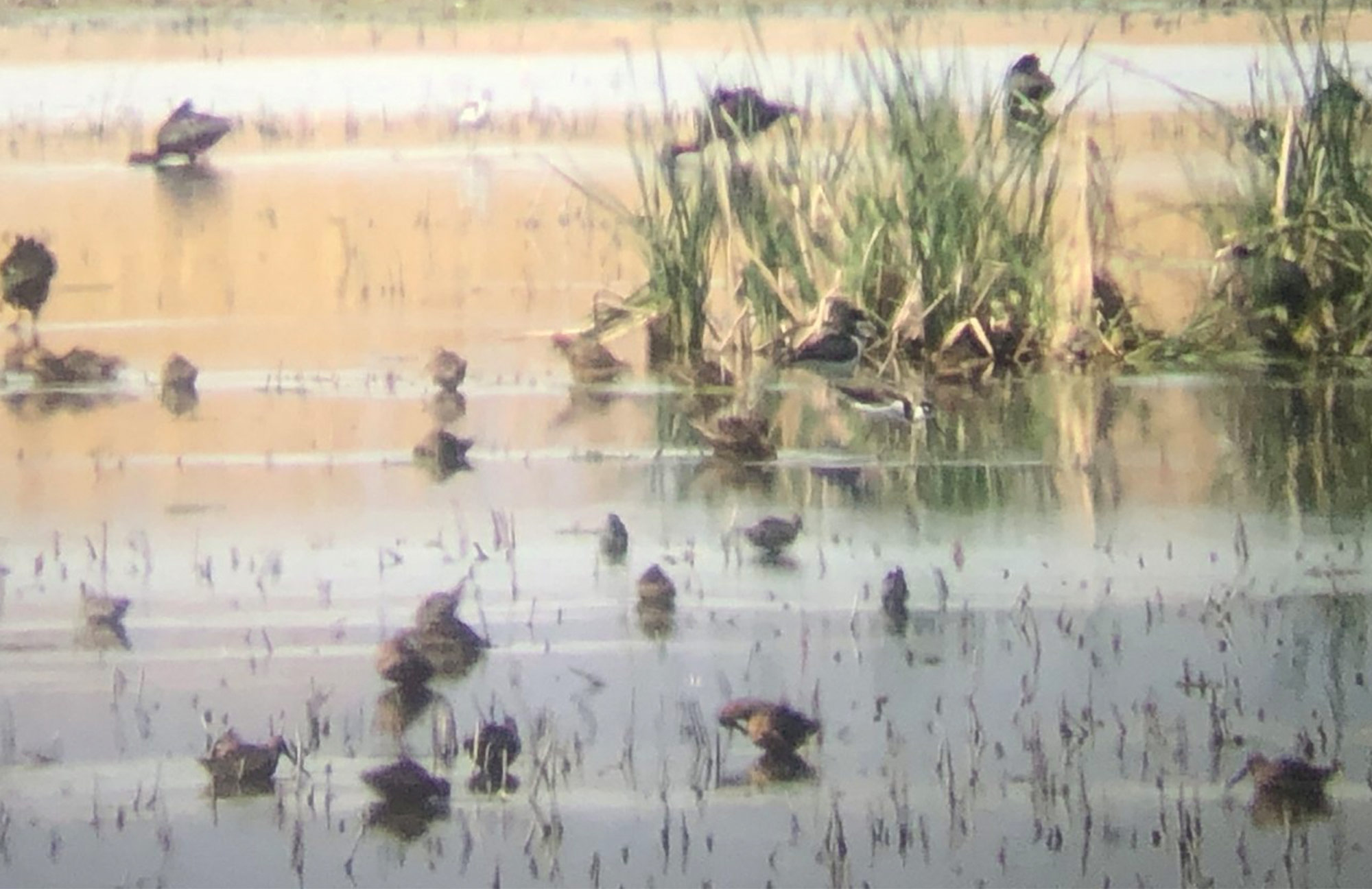 Perhaps the greatest photo ever taken of Stilt Sandpiper

By the time we wrapped up here, it was apparent things were not going as planned. We had 110 species, where we expected to be in the 120s. Shorebirds and waterfowl were partly to blame, but missed waders and migrant songbirds also contributed. We had some serious work ahead of us to catch back up. We made a quick stop at Bountiful Pond where Common Merganser and Red-breasted Merganser helped, but not much else. Trying to figure out the best way to pick up species quickly we made a stop at Mueller Park in Bountiful, a first on this trip. Intermittent showers didn’t stop us from walking up the lower portion of the canyon where we added 11 species for the day, including Golden Eagle, Peregrine Falcon, Townsend’s Solitaire, Fox Sparrow, and Olive-sided Flycatcher.

Making our way into Salt Lake City, we added Swainson’s Hawk and Turkey Vulture on the move. Deciding to add a trip first we made a side trip up Millcreek Canyon where a flock of 9 Tundra Swan has been staying at a private pond since a November windstorm knocked them down here. This in all likelihood will be the only time this bird is ever seen on this tour! 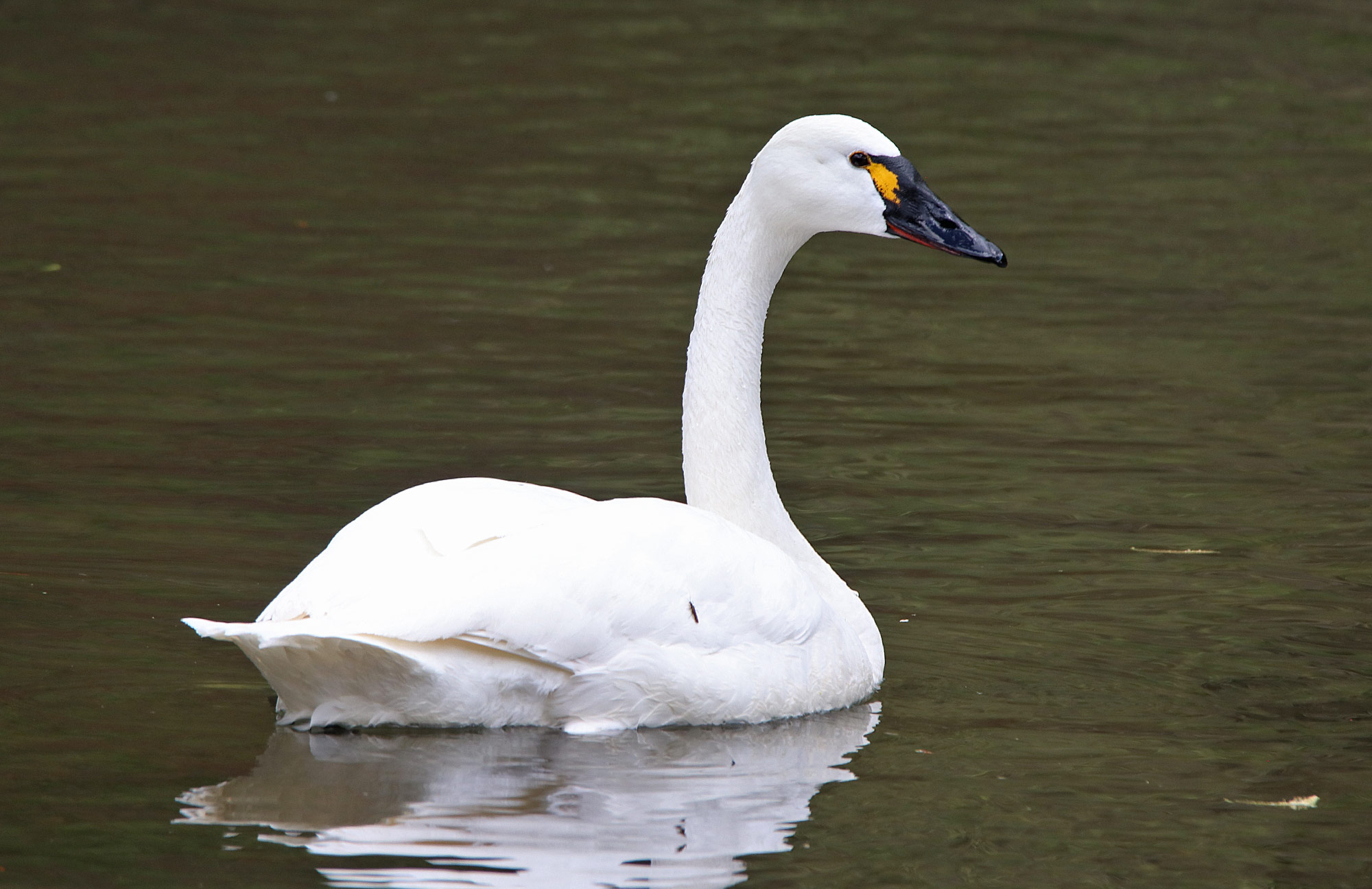 The birds can fly (and have left and come back), but it was quite a surprise that they have remained through May (still being seen in August!!!)! We easily got them as well as Blue-gray Gnatcatcher and a highlight Black-throated Gray Warbler before exiting the canyon Having missed most of the swallow species thus far we made a short stop in Cottonwood Heights at Old Mill Holding Pond where we got all of the expected species except Bank Swallow. 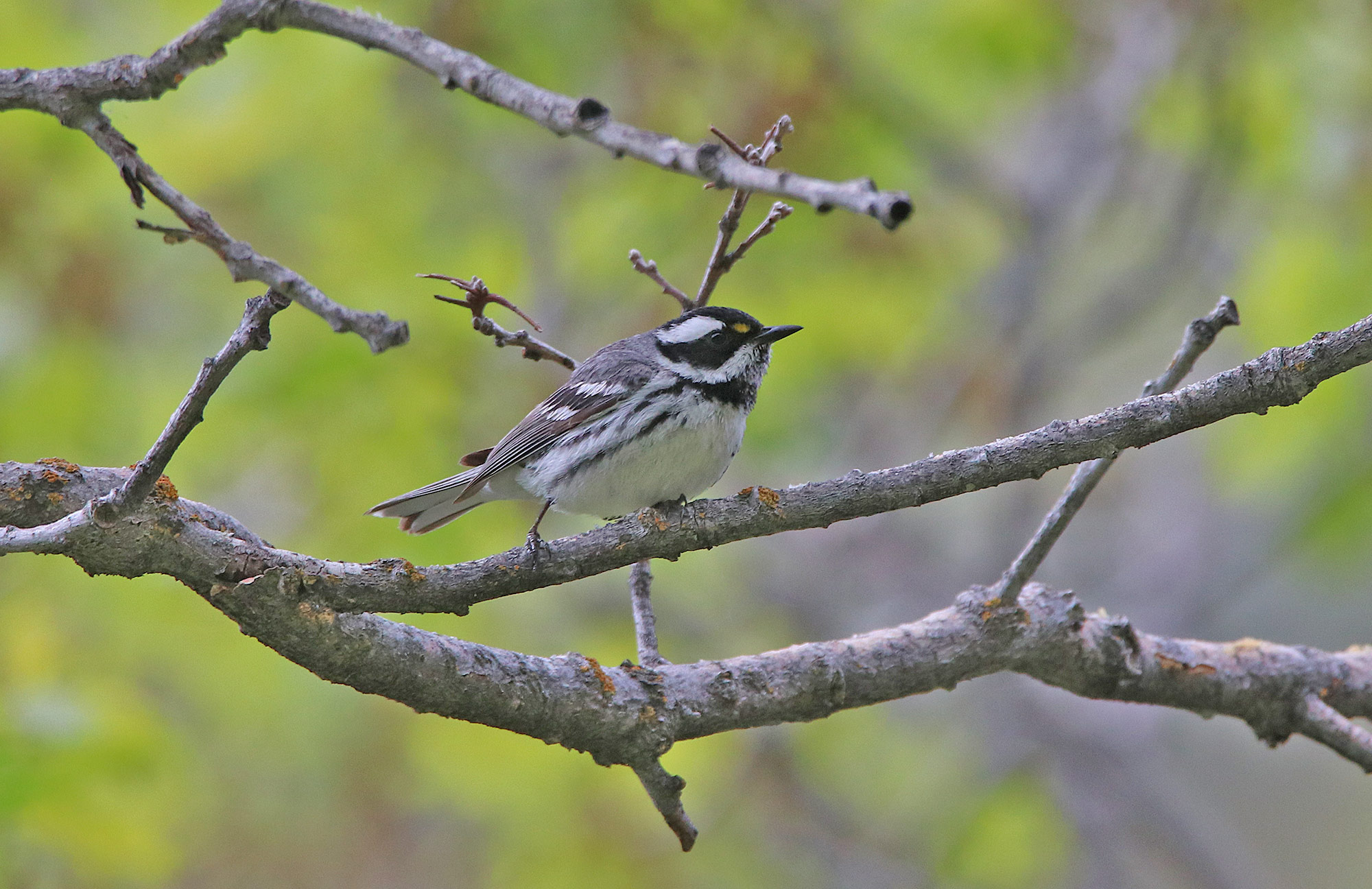 Making our way to almost 9,000’, with a laundry list of montane species we visited the town hall feeders at Alta where things weren’t as hopping as we hoped. Nonetheless, we managed to pick up Clark’s Nutcracker, Brown Creeper, Downy Woodpecker, Cassin’s Finch, and our first Dark-eyed Junco of the day. As we left the canyon and made a dinner stop, we sat at 139 species for the day. Trying to figure out how to pick up 21 more species with a couple hours of daylight and impending thunderstorms isn’t a fun task to tackle. While everyone refueled on Mexican food I scoured through my list for the day trying to figure out the plan back to 160. It still seemed possible and with Kenny having a few stakeouts on our route, we set out to get back into it. Stopping at Little Dell Reservoir we added a lingering Common Loon, and a surprise flyby Sharp-shinned Hawk. We grabbed the last swallow for the day as several Bank Swallows circled over the lake, and the usual Osprey were on their nest platform via a scope view. 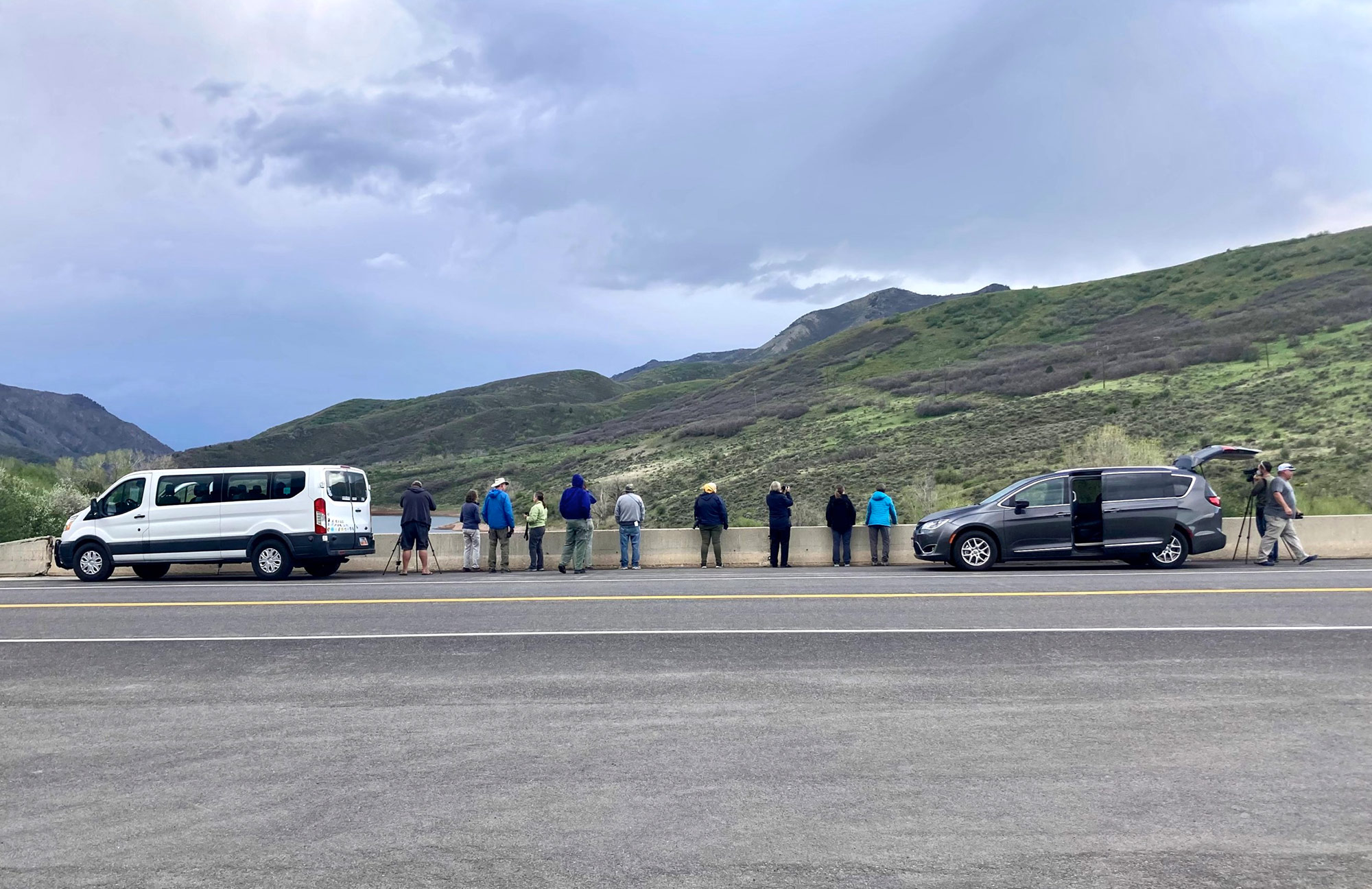 The Group birding at Mountain Dell (photo by Kenny Frisch)

Kenny came through with Yellow-breasted Chat at Mountain Dell Reservoir, but we dipped on American Dipper as a nest he had located near Lamb’s Canyon. At 144 Species at 6:51 PM, the skies opened up and the deluge began. For the next hour and 10 minutes, we didn't add a single species, and missed a handful of things we hoped would fill in gaps. At 8:01 PM we finally got things moving again with a Belted Kingfisher along Jeremy Ranch Road in Summit County--the only new species in the county for the day. 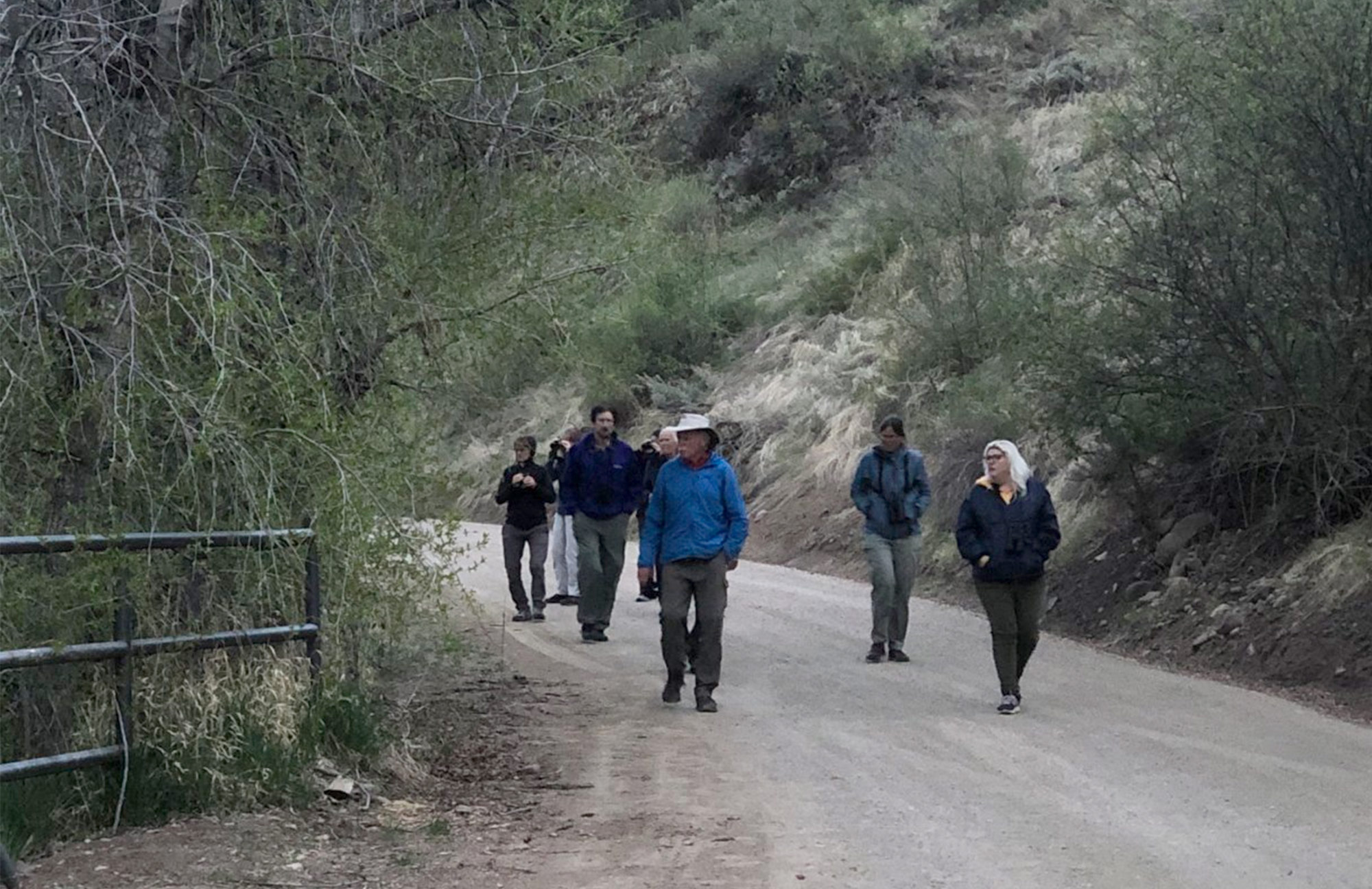 Near the north end of Jeremy Ranch Road in Morgan County, we quickly added a pair of expected species—American Dipper and Bald Eagle. Additionally here we had audibles for both Wild Turkey (responding to my awful imitation), and a Wilson’s Snipe calling from a wet meadow.

As daylight turned to darkness, we sat at 149 species, well short of what we needed to be at to hit 160. Even with our best nocturnal effort, we might eke out another 5 species. And on this wet and cool evening that was not the case. We started off strong with an audible Flammulated Owl. There were very few birds even calling, and we only heard 4 Flammy’s total. This was followed by an audible Common Poorwill. No other owls were on the docket and this seemed like the last new bird we would get. But then an odd calling accipiter caught our attention. It was a call I hadn’t heard before but reminded me of a Northern Goshawk. But it was dark, so what was going on? As we approached the call and put a light on the trees it broke into the typical shrieks of a goshawk and flew off into the woods, and Mike managed to capture a recording! A truly odd experience.

And that was it, species number 152 for the day, besting our 2019 total, but falling short of our average by nearly 10! Regardless, it was an enjoyable day of birding with a great group of people. And it was a big step in the direction back to normalcy post-pandemic (whatever that ends up looking like). 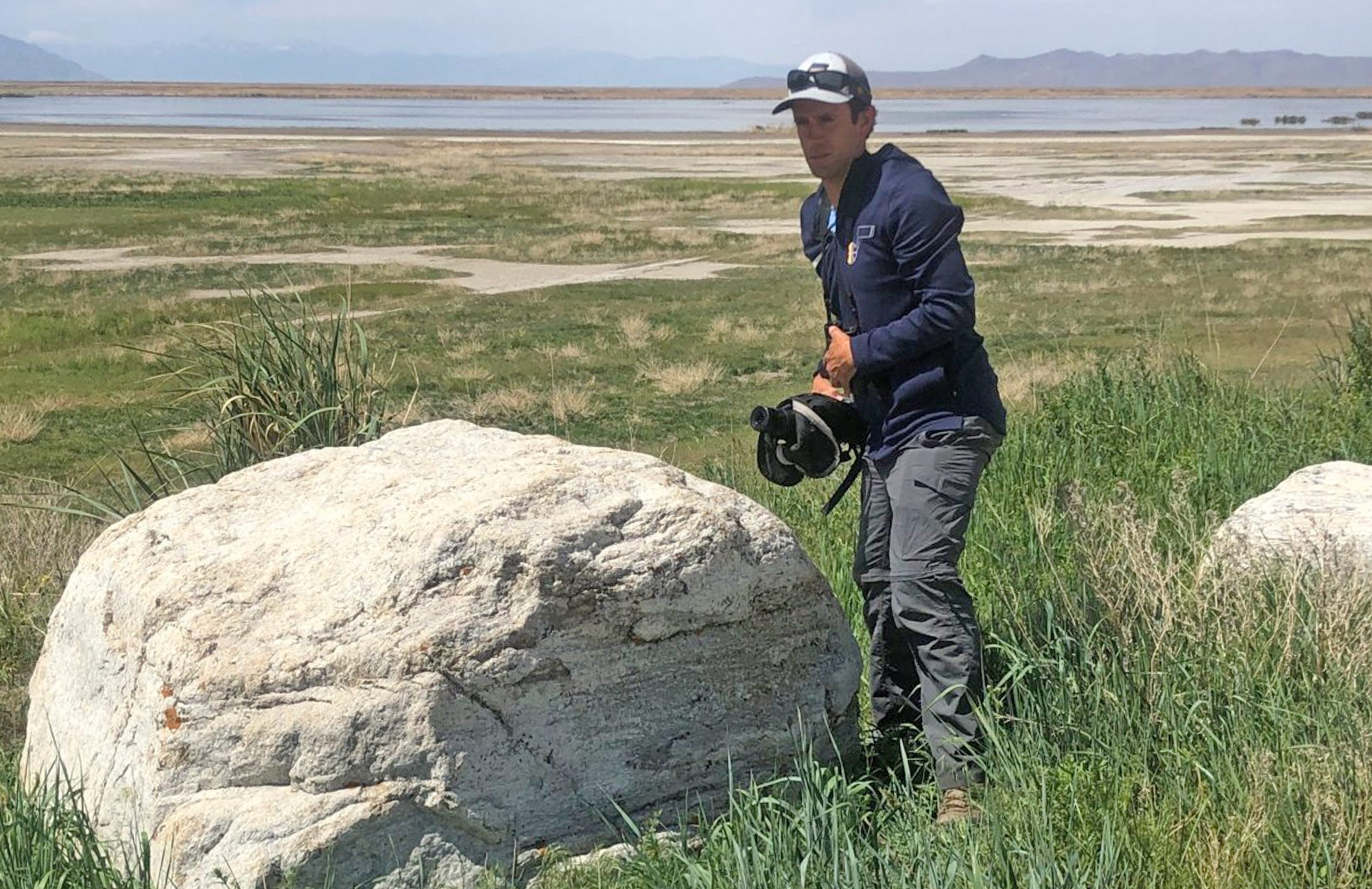 Kenny Frisch was a great addition as a guide

Kenny Frisch filled in for Jeff Bilsky who was not able to join us this year, and he was a great addition to the guide team. Sadly, this will be Taylor’s last marathon for at least 2 years as he will be living out of the country. It looks like Kenny will be back for the next few years, and we hope we can convince Jeff to make the cross-country trip to help again as well!

Thanks as always to Mike, Taylor, and Kenny for their excellent leadership, and thanks to our wonderful group that forged ahead as we dealt with the weather and the typical changes to our plans as we tackle this “mini big day”!

Photos from this Tour:
View the Photos

Birds Seen on this Tour:
View the Checklist