Death From Above: Peregrines Killing Vagrants 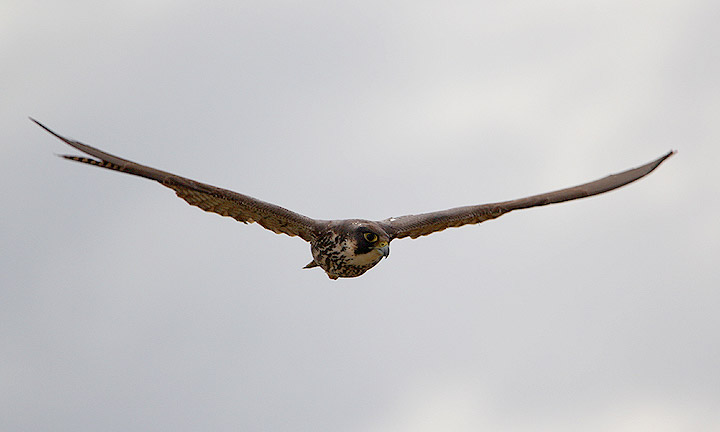 If you're tuned into the national rare bird scene, you might be aware of something that happened in San Francisco this past week.  Here, I can't tell it better than those who saw it happen:

The Ross's Gull was just taken by a pair of Peregrine's, 2:10 PM today, Saturday, from the same muddy field reported earlier. The actual hunt lasted no more than 30 s. The Peregrine's got it in the air, and then the gull didn't stand a chance.

We were all stunned.


Yeah! That's right, a vagrant Ross's Gull in San Francisco was taken out by a Peregrine Falcon in front of birders who were watching the stunning bird.  What a way to go!  So I'm not going to lie, when I read this I thought to myself, "this is freaking awesome!".  You might be thinking that's kind of a dick thing to think, but come one, think about it.  This bird that is 1,000's of miles from where it normally is found had been around a day and a half in California and boom! Finished.  What are the odds? Really, think about that, out of the 1,000's of gulls present along the coast, the Peregrine managed to get the rarest of them all.  How? Why?  Is there a reason?

I've found it interesting that over the years I've heard several stories and seen for myself, Peregrine Falcon's going after birds that are seemingly out of place.  This begs two questions:

Is this normal? Do predators regularly go after birds that are out of place?

Is it just that people tend to be paying closer attention to vagrants, so when one is picked off by a predator, we tend to notice?

And maybe it's a little bit of both.  Here's a look at some of my favorite vagrant meet Peregrine stories. 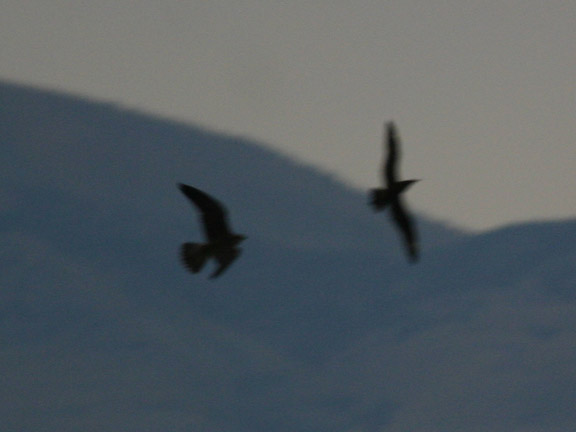 So this is from my personal file.  In the fall of 2005 an emaciated Parasitic Jaeger showed up in northern Utah.  My friend Colby Neuman and I were the first people to chase the bird the morning following the report.  As we watched the bird and I was taking photographs, a dark streak flashed through my lens, and then the jaeger was gone.  Colby was freaking out and let me know a Peregrine had just attacked! I got out of the car and watched the falcon chasing the jaeger out over the Great Salt Lake until both bird disappeared out of sight.  I thought for sure the jaeger was a goner, but about 10 minutes later it drifted back on to the beach and landed right where it had been before.  The falcon lost this battle, but the jaeger died a couple days later on its own. 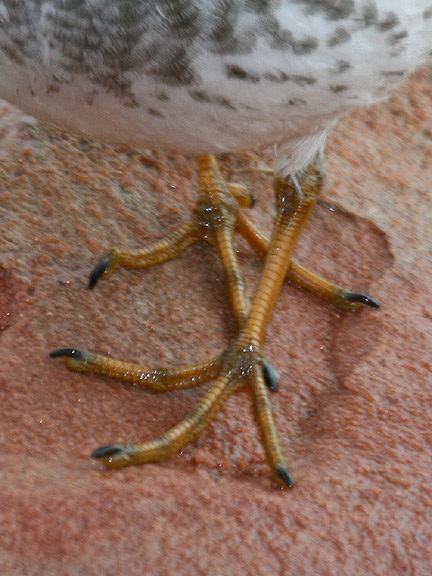 Check out the orange feet of a Purple Sandpiper

So this story is strictly anecdotal.  I don't know the facts but was told this by a birder while I lived in Indiana in 2006.  Every winter Purple Sandpiper show up on Lake Michigan.  Usually in relatively small numbers if at all.  If you know PUSA, you know they like rocks, and the best places to look tend to be break walls and jetties.  In Michigan City, there is a great break wall where these birds have been reported sporadically in the past.  As the story goes a birded ventured out around Thanksgiving one year following the report of a sandpiper.  They arrived at the break wall and were scoping it when they found a Peregrine Falcon sitting on the wall.  Upon closer inspection they noticed two bright orange feet sticking out from underneath the falcon.  The sandpiper wasn't reported again and the assumption is that is was breakfast.  Whether or not there is any truth to this story, it remains one of my favorites. 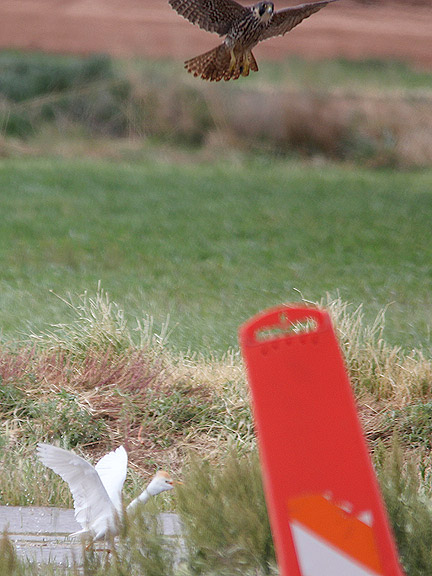 This is another one from the personal archives and involves a pair of Cattle Egrets in Washington, Utah.  Wath remains of this farming community rests on the edge of the Mojave Desert and isn't a great place for birds like Cattle Egrets.  They do pass through during migration, but this was only the 2nd time I had seen them in the county.  In a flooded field were a handful of shorebirds, ibis, ducks, and the pair of egrets going about their business as usual.  As my friend Kenny Frisch and I watched the birds a Peregrine Falcon slammed into one and attempted to take off--but the egret fought back.  For several minutes the Peregrine tried to stoop on the egret as it worked on hiding in some tall grass, finally managing to do so and leaving the falcon empty handed.  The ibis eventually flew right past us, looking a bit unkempt, but alive.

For those keeping score, it's tied 2-2 Peregrine v.s. "Vagrants".  So here's the tie-breaker, and perhaps the best story--mainly because there is video...

On April 26, 2011, a White-faced ibis that had been seen for most of the previous week at Plum Island, Massachusetts was being watched by a class from Green Mountain College.  While the class was watching, and video was being taken explaining that this was a rare bird for Massachusetts, a Peregrine Falcon enters scene right.  I'll let the video take it from here:

Make that Peregrine 3 - "Vagrants" 2...  The clear winner the Peregrine Falcon.  The ibis video while amazing, and sensational because of the college kids and their reactions, is just another example of a Peregrine taking out a bird that is seemingly out of place.

But, that still doesn't answer the why?  In each case above there are other far more common birds the falcon could have taken instead. In each case, the rarity is what was attacked.  Predatorial birds and animals are well known to go after the weakest, often injured and sick individuals because it poses the least challenge with the greatest chance of reward.  In many cases are these out of place birds obviously the weakest link to the predators?  Whatever it is, it's an interesting topic, and one that I think about a lot when I see falcons.  Now whenever I see a rare bird I'm always keeping one eye to the sky so I can see the next attack coming!

Have you witnessed a Peregrine attacking an out of place bird?  If so share below!

I believe that all the circumstances you listed above to play a roll in this. I also think that the presence of the birders and photographers can distract the birds just enough to give the falcon the edge.

That's an interesting point--we probably contribute and in some cases bring attention to the bird. I wonder if anyone has studied this, it would be an awesome theory to test.