July 27 - August 1, 2020 - From Salt Lake City, Utah
In early summer as we realized covid-19 wouldn’t allow us to proceed with our group tours as usual, we canceled all our summer group itineraries. It was pretty disappointing, but the right thing to do, and really the only thing to do. As luck would have it one cent wanted to do a private tour with the most wanted as the base and an additional few days on the tail end. With a target list, we planned out a tour in place of what would have been the 2nd most wanted tour of the summer

My clients arrived on July 27th and we did an earlier than usual pickup with some of the usual birding around the airport. Kicking things off we snagged a few Neotropic Cormorant and most of the usual breeders in the wetlands here. What we did next was head into the mountains for some birding not usually included on the tour—but what might now be a big part given the luck we had. Right off the bat, we found a cooperative Cordilleran Flycatcher—followed by 6 more over the next hour! We had great looks at Red-naped Sapsucker and Hairy Woodpecker and picked up all the usual montane breeders. 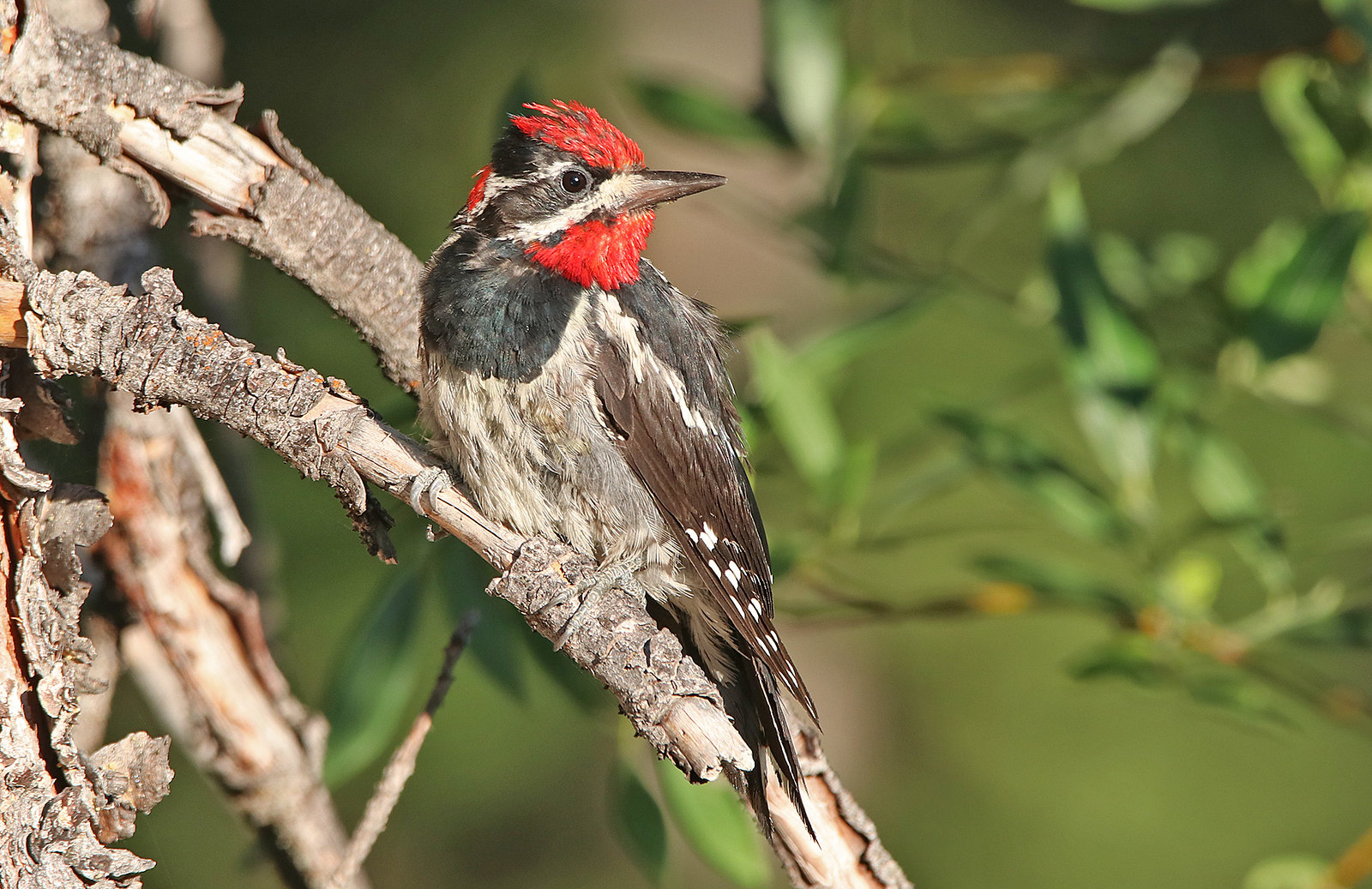 Red-naped Sapsucker dressed to the nines!
The major prize though was a pair of American Three-toed Woodpecker. I had been following a pair all summer and they didn’t disappoint today. 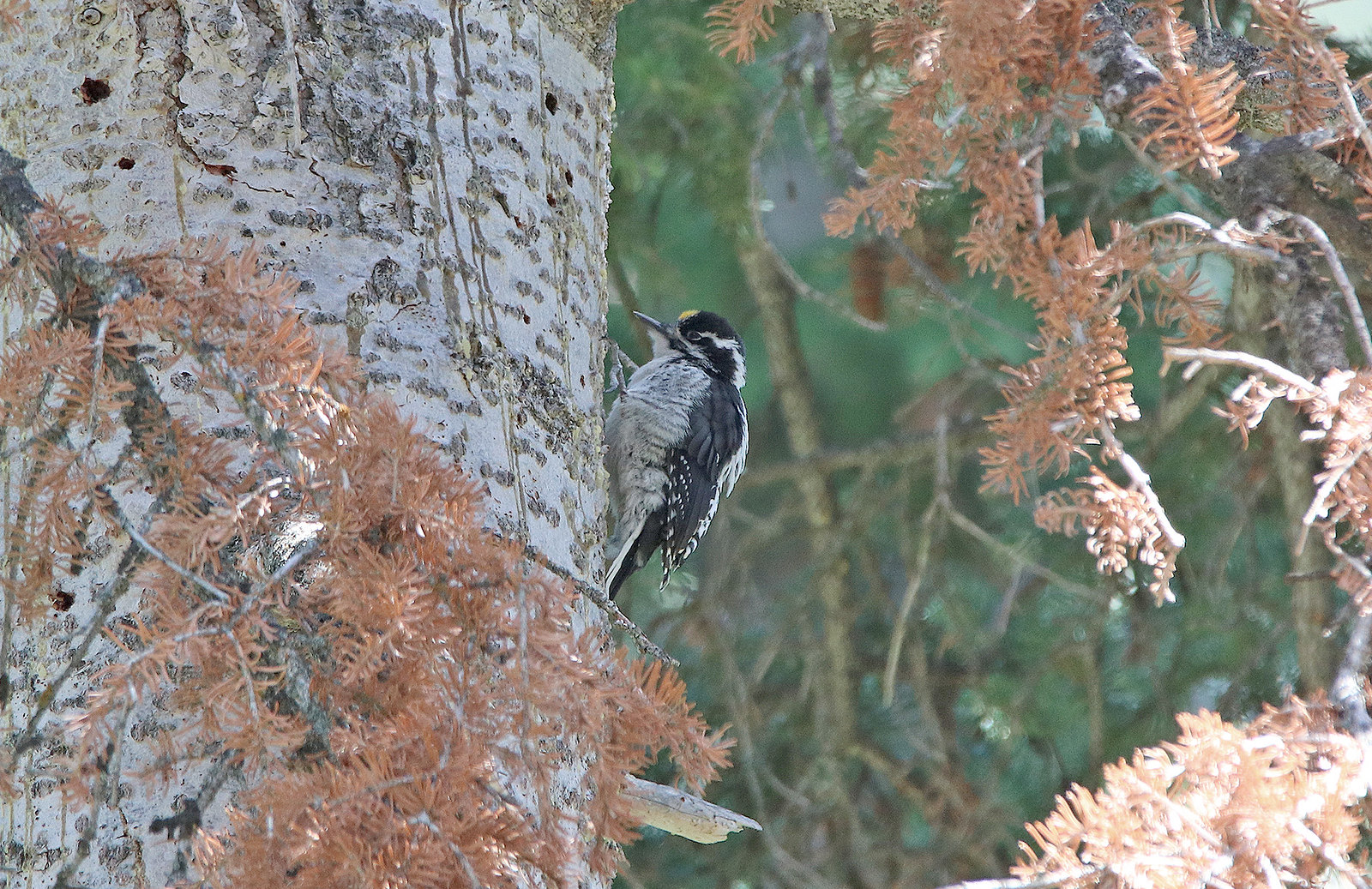 This American Three-toed Woodpecker was a first on a Most Wanted Tour
An unusual highlight was an early 1Y Nashville Warbler, the first for a most wanted tour. We progressed through the afternoon picking up American Dipper, and a variety of target species, as well as an unexpected Peregrine Falcon while we ate dinner in a parking lot as we avoided eating with crowds. We visited our Black Swift nest site and at 8:30 pm got really good looks at 2 birds flying over. 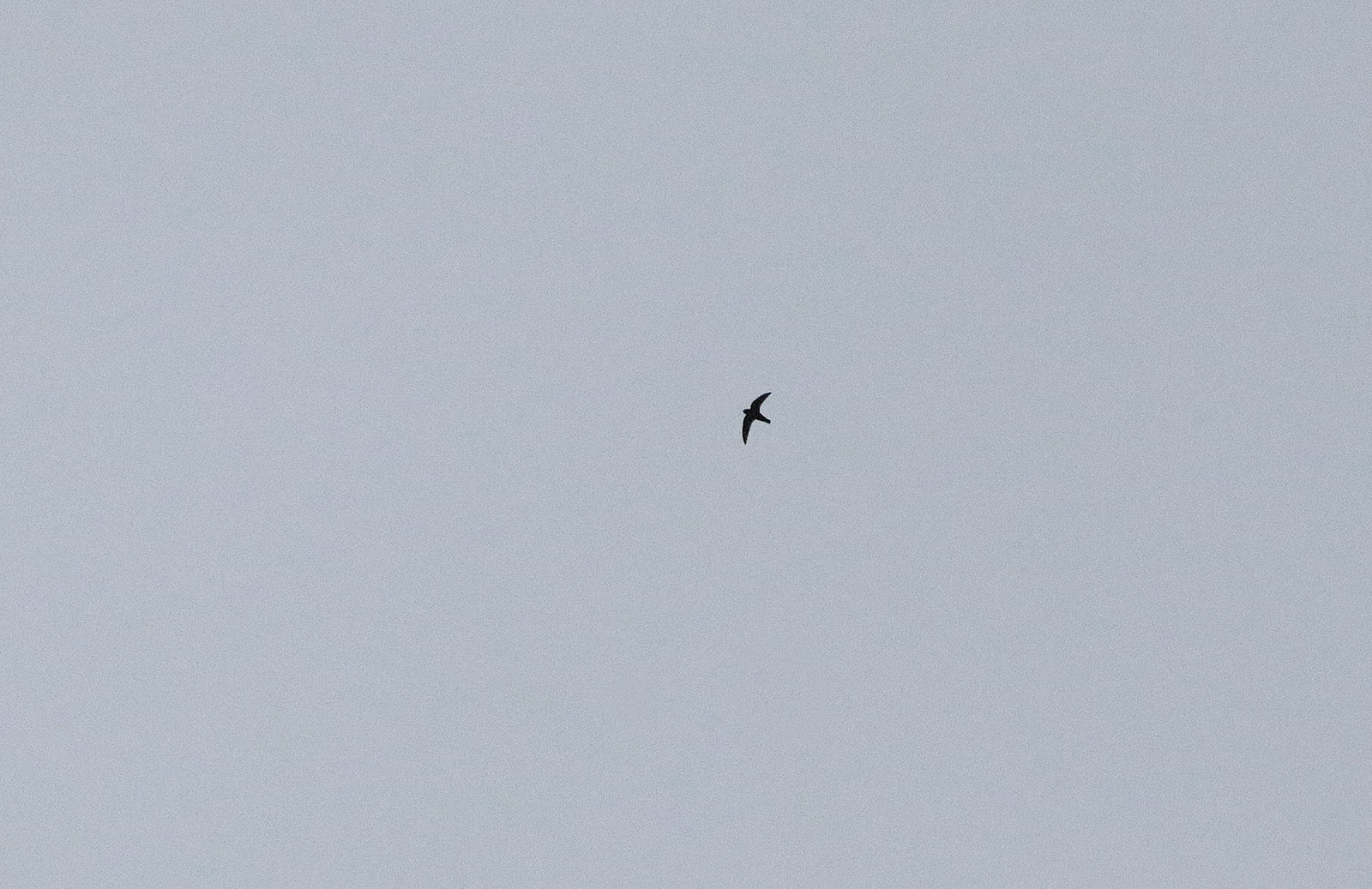 Black Swift soaring overhead
After dark, we didn’t have to work very hard to track down 4 Flammulated Owls. Very cooperative birds that let us enjoy their presence while they called in the dark and we occasionally lit the trees nearby for great looks. 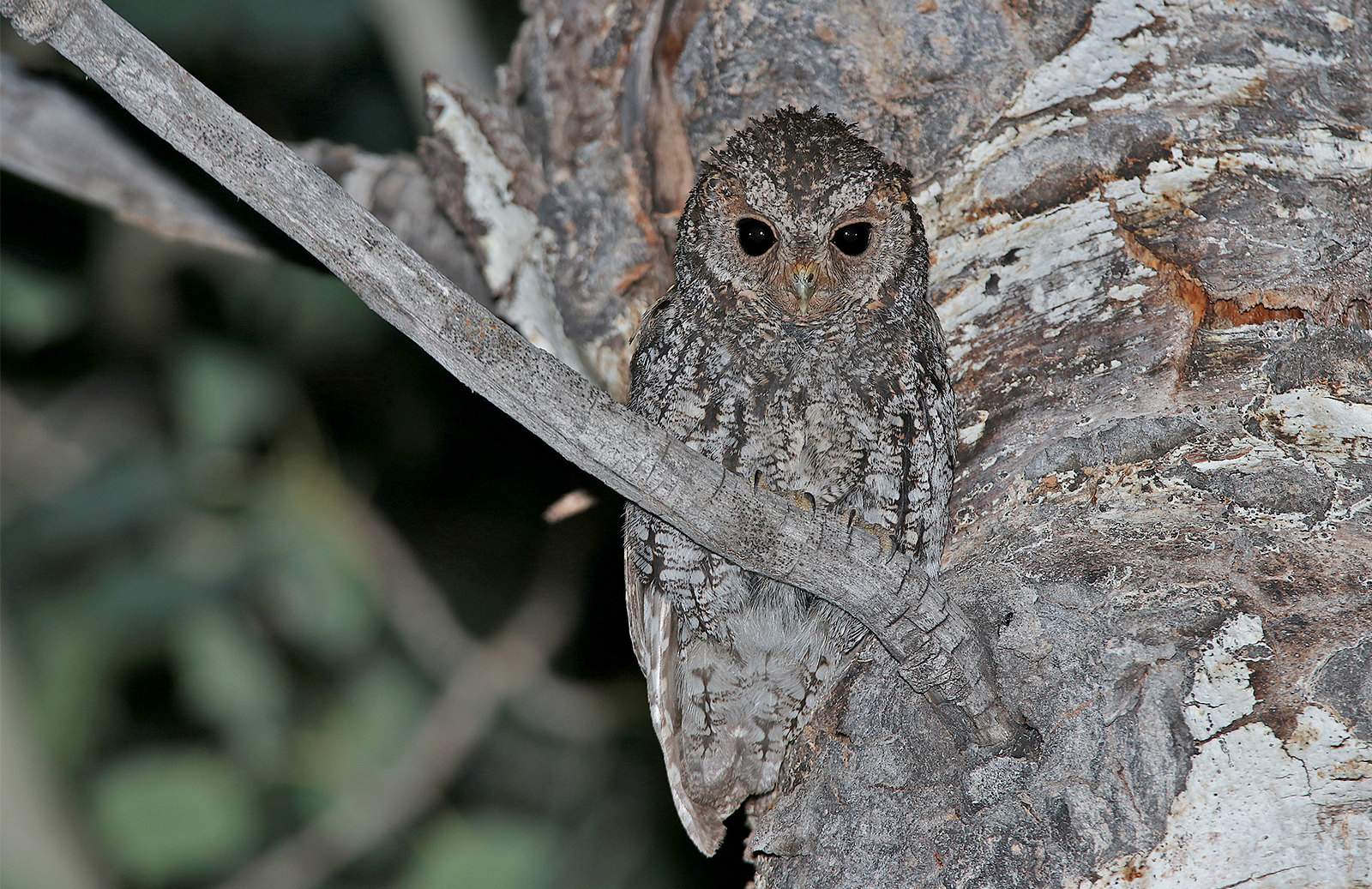 One of 130 Flammulated Owls we encountered on tours this summer.
On morning 2, we set off for the desert habitat southwest of Salt Lake City. Being late in the season it can sometimes be difficult to track down some of the usual suspects. We did pretty well locating 9 Gray Vireo including one bird that followed us as I imitated a pygmy-owl and walked through the junipers. 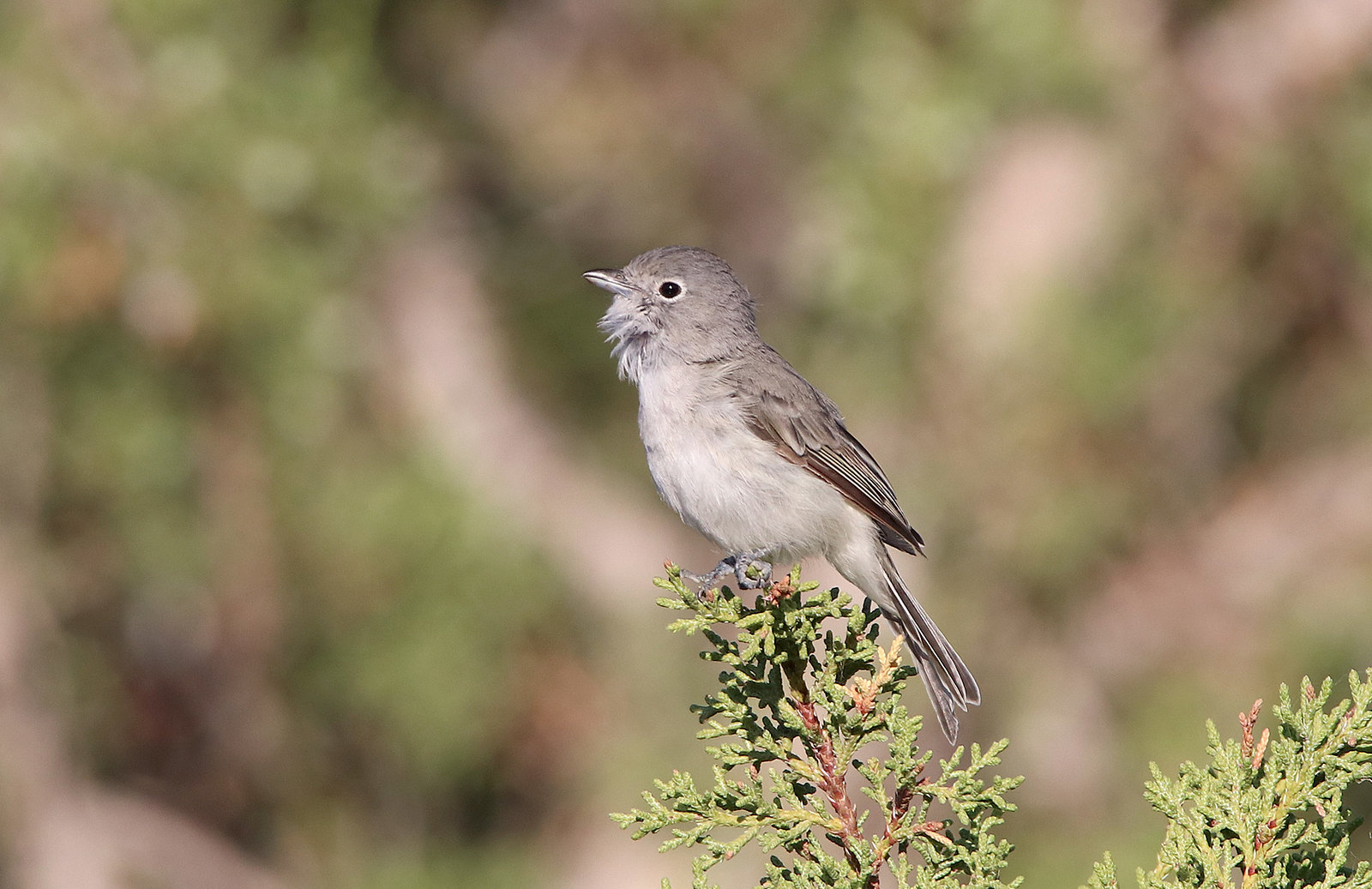 Gray Vireo still singing at the end of July
We picked up Woodhouse’s Scrub-Jay, Juniper Titmouse, and Bewick’s Wren as expected but missed Gray Flycatcher and Ash-throated Flycatcher. These early arriving species can be tough but we usually get them this late. My theory was that we had an early spring and many of the breeders had departed due to how dry things were and the lack of water this year.

Moving into the sagebrush habitat we added Brewer’s Sparrow and Black-throated Sparrow. While Sagebrush Sparrow was a miss, I was confident we would pick that up in Nevada. We got some bonus birds that weren’t expected today including a large flock of Mountain Bluebirds, and a Green-tailed Towhee pretty far out of habitat. An extra stop ended up securing a Sagebrush Sparrow so another big target was out of the way. 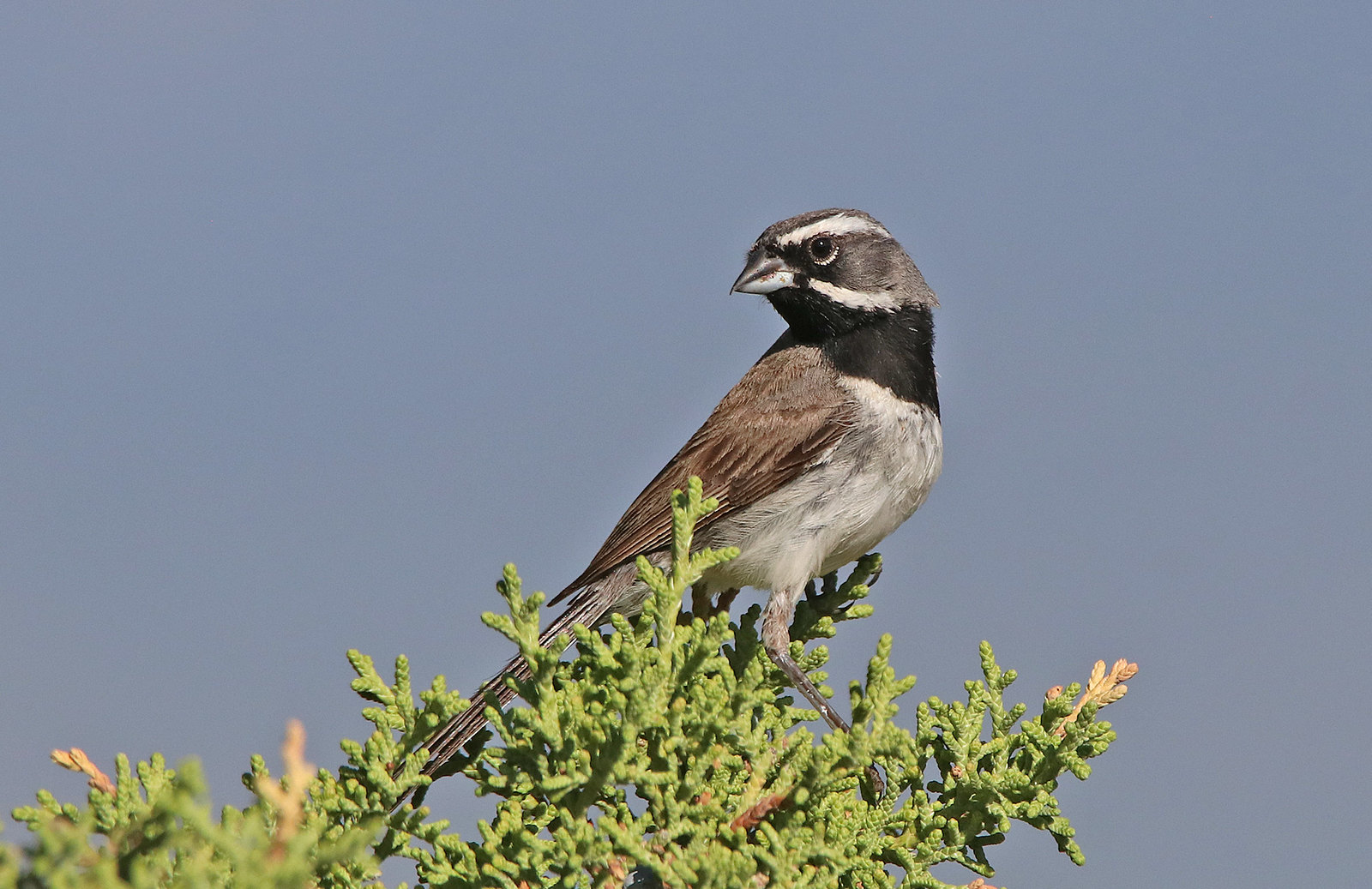 Black-throated Sparrow is one of our flashier breeding sparrows
Heading towards Nevada we picked up a Ferruginous Hawk. Not at our usual spot, this stakeout bird had been present at another location all summer. We arrived in Elko on a hot afternoon and opted to relax in the AC of our hotels instead of try birding in the heat. A little evening birding around town produced some usual suspects, but nothing out of the ordinary.

Day 3 kicked off bright and early—we arrived at the trailhead at 4:15 am and were at our viewpoint by 5:26 am. As the sky started to lighten I scanned the slopes which were almost completely devoid of snow for the first time on a tour. We heard several Himalayan Snowcock start to call then spotted several flying off some far cliffs and out of the canyon. I moved the scope to where they left for and as luck would have it a single bird was sitting there still. I got the clients on the scope and bird and after short looks, they told me the bird was gone.

I attempted to relocate it, but nothing. I started scanning and nothing. For the next 2 hours, I worked my way back and forth across the canyon and along the slopes—nothing. That was it. If we hadn’t have been in place right at sunrise we would have missed the birds. It was a bit frustrating, but we did get the bird so it worked out. We headed down the trail and picked up Lewis’s Woodpecker unexpectedly along the trail, along with our usual Dusky Flycatchers, Rock Wrens, and MacGillivray’s Warblers. 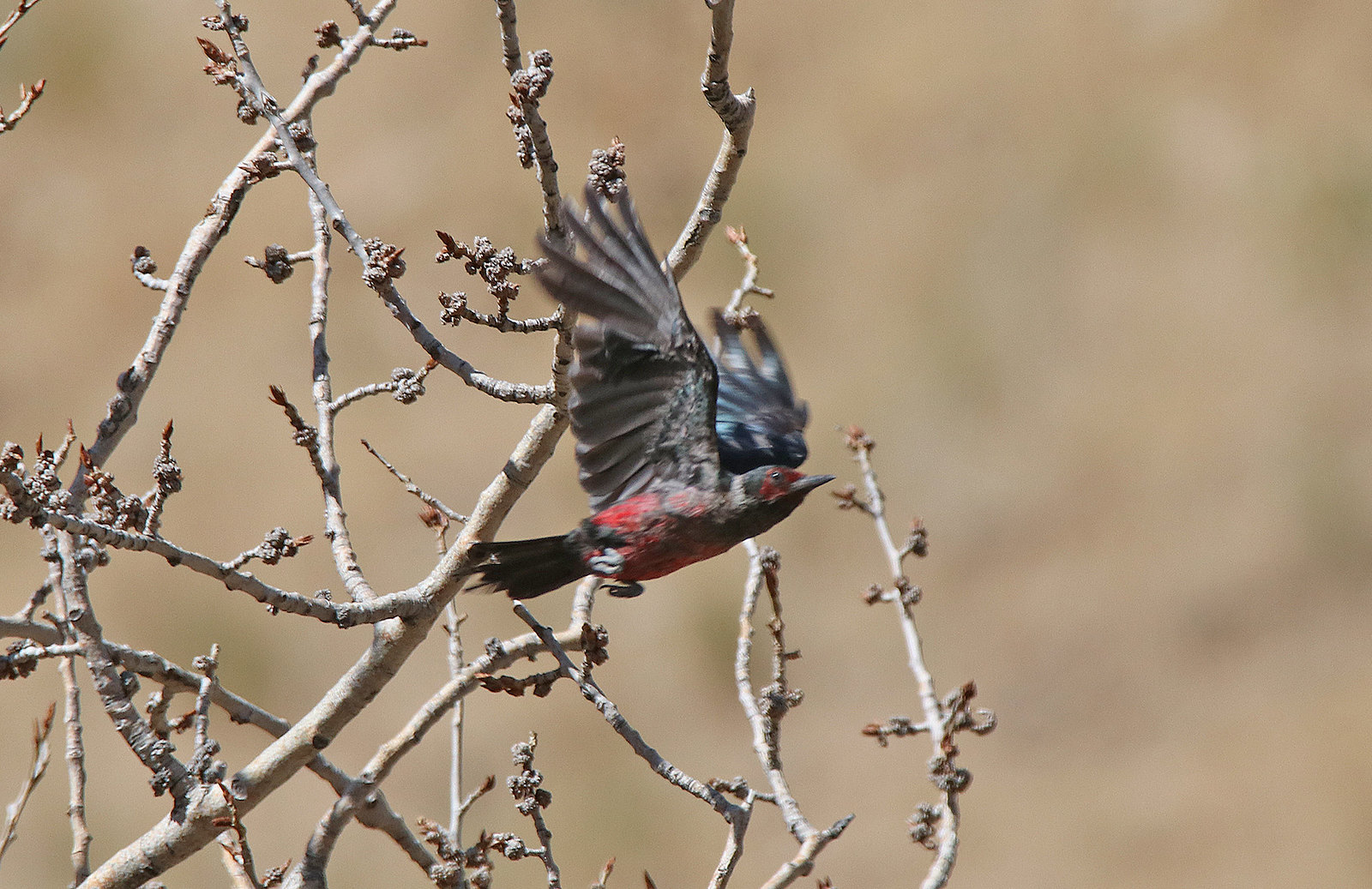 Lewis's Woodpecker taking flight
We spent the rest of the day relaxing before visiting the desert and reservoir south of town. A Semipalmated Plover at South Fork was a good find, while everything else was expected. On day 4 we decided to head back south of town. We found a roosting Common Nighthawk that was more than accommodating for photos. 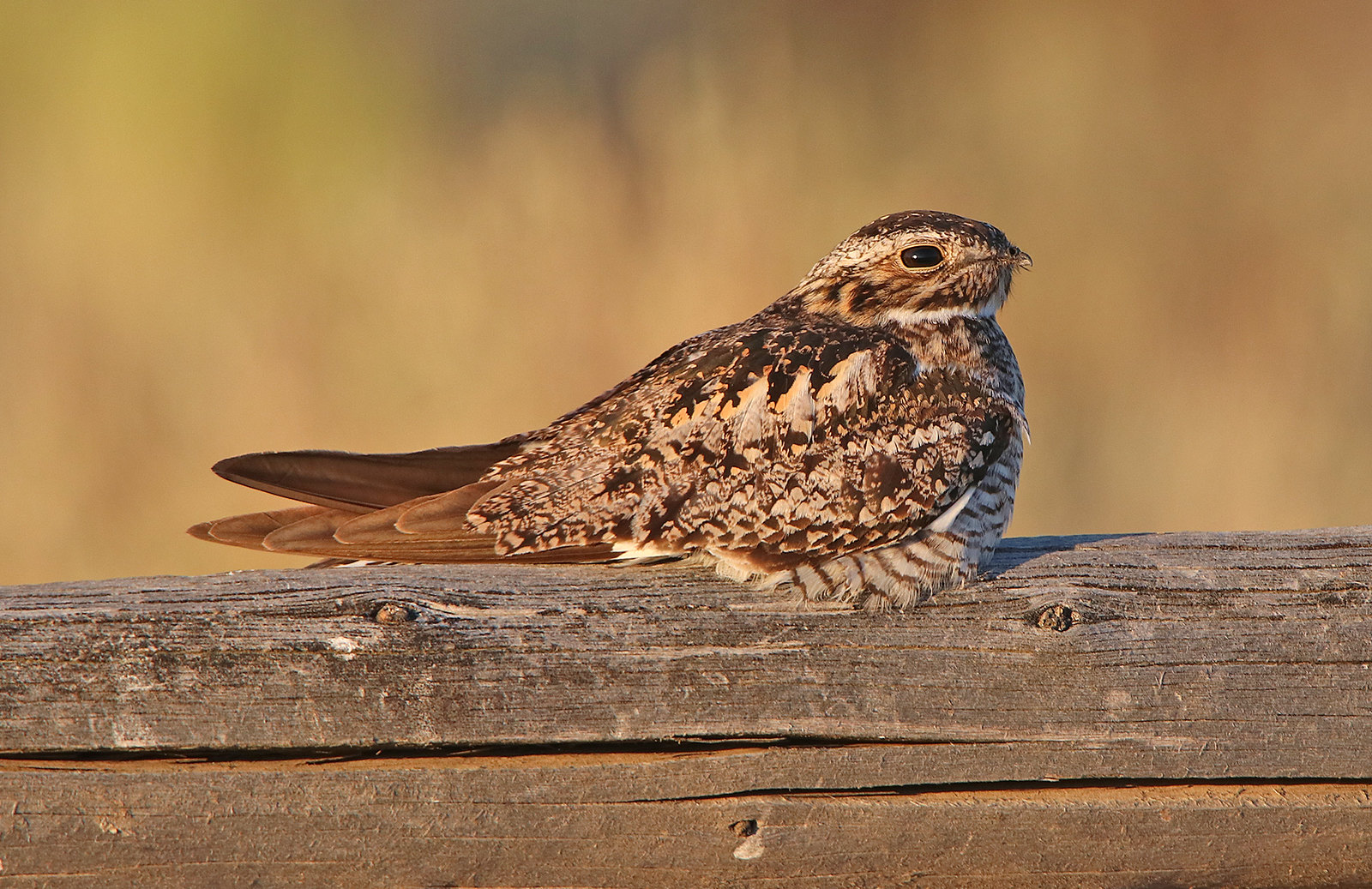 Common Nighthawk really have an incredible pattern
We also picked up our target Gray Flycatcher that we missed in Utah. Another super cooperative bird landed on the same post as the roosting nighthawk.  In the early morning light we enjoyed some great photo ops on various twigs, brushes, and fence posts! 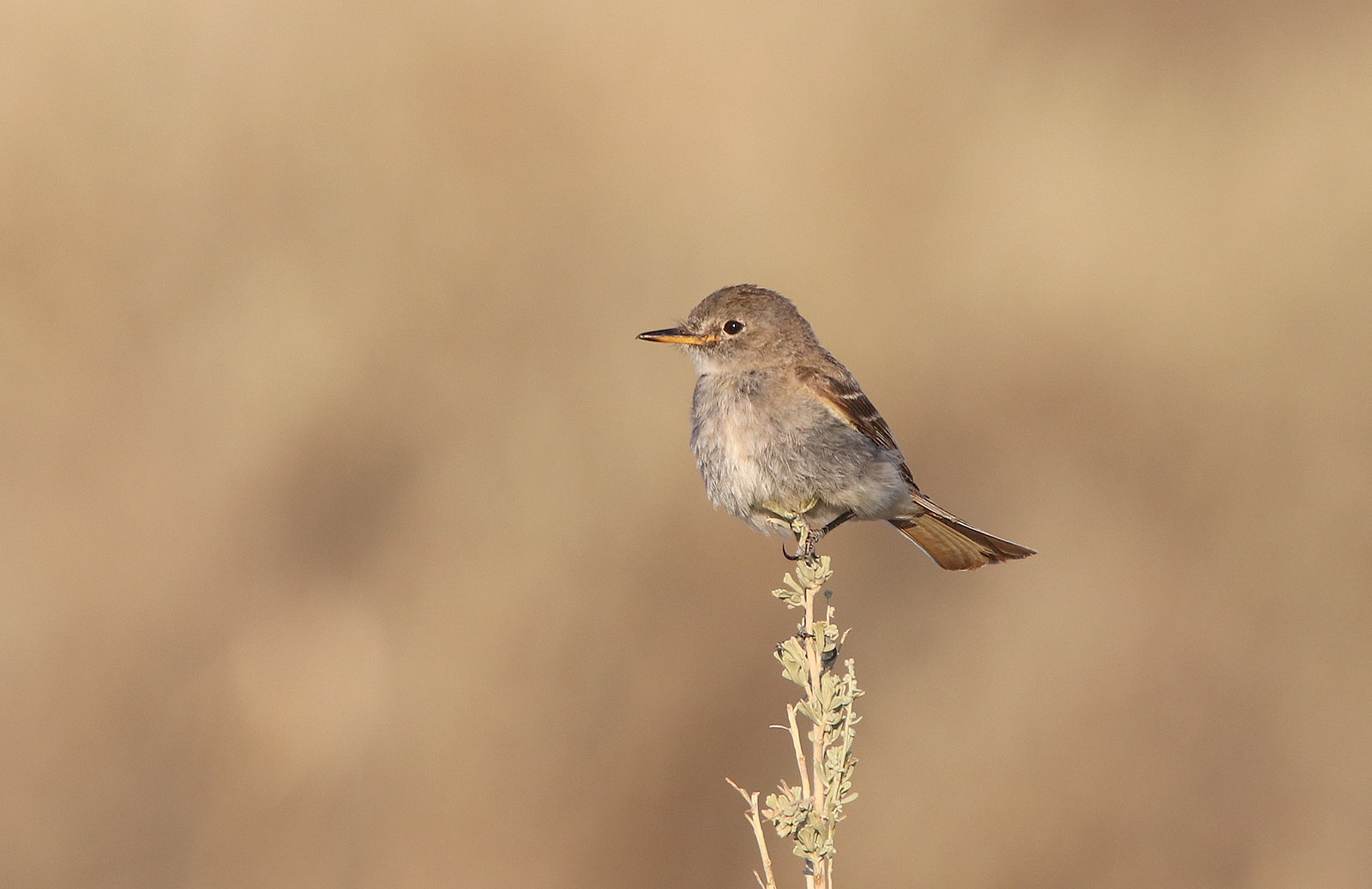 Gray Flycatcher success in Nevada
Turning our attention towards Idaho we left Elko and made our way north. We did make a brief stop to check out a Sagebrush Sparrow stakeout that turned up 9 sparrows!!! Continuing on, we crossed the state line and were on our way into the mountains to search for crossbills. Of course, we had to make an obligatory stop at Brockman’s Feeding Station where a dozen Black-chinned Hummingbirds and 7 Broad-tailed Hummingbirds mostly controlled the feeders. A Single Rufous Hummingbird came and went sporadically, while 3 Calliope Hummingbirds were the target bird that provided numerous opportunities for good looks. 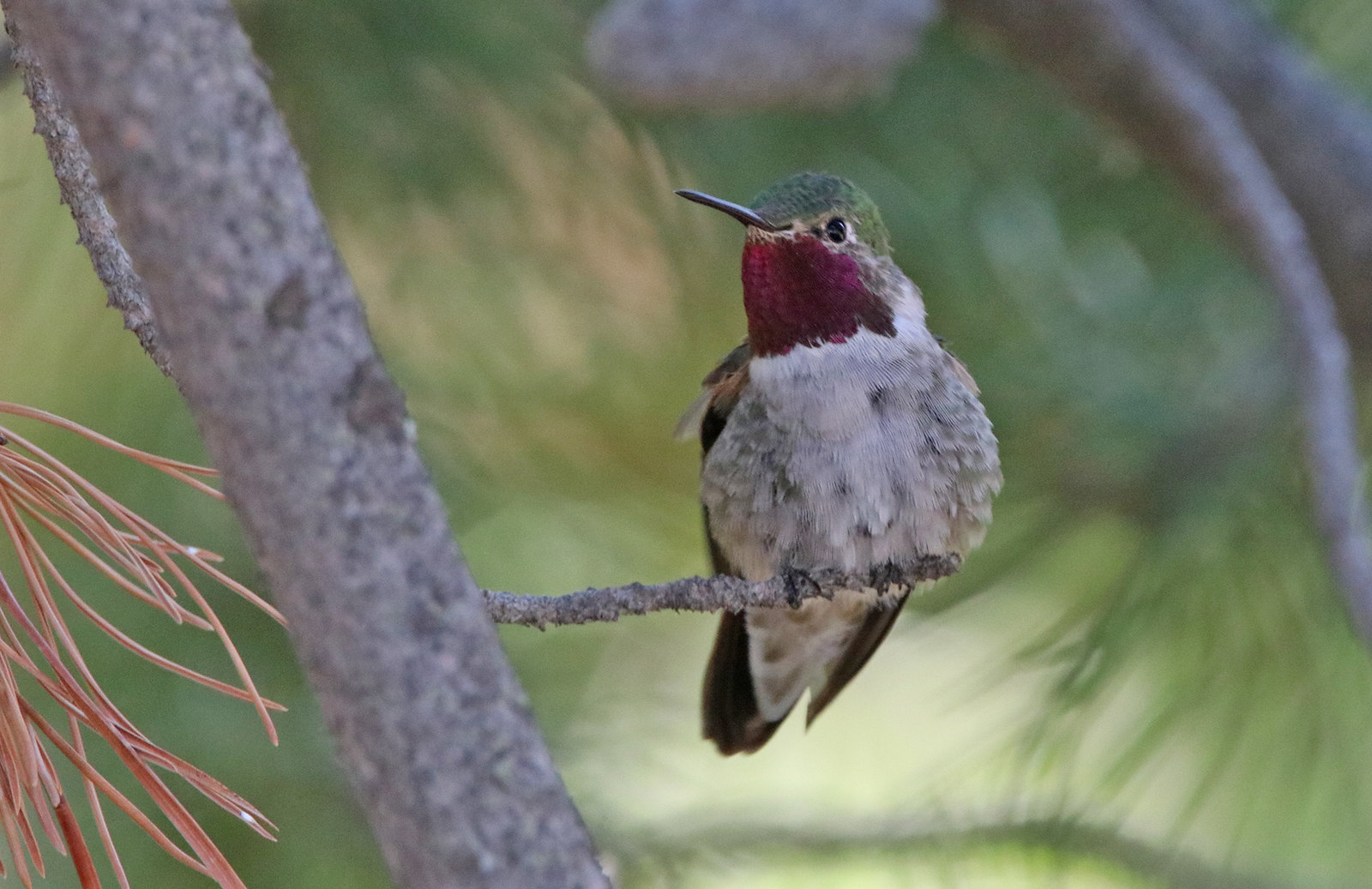 Broad-tailed Hummingbird giving a peek at that gorget color
Making our way further into the South Hills we started looking for Cassia Crossbill, but it was a warm and quiet afternoon. Our first couple stops didn’t turn up any crossbills and by mid-afternoon, I was starting to worry. My second reliable spot was also quiet, so calling an audible we took a hike to an area I hadn’t previously looked before. Coming over a hill, I flushed a crossbill and it emphatically called revealing it was a Cassia Crossbill. I saw where I thought it had gone and worked our way to the spot found the bird up in a tree feeding. It was a drab 1Y bird, but the target nonetheless! 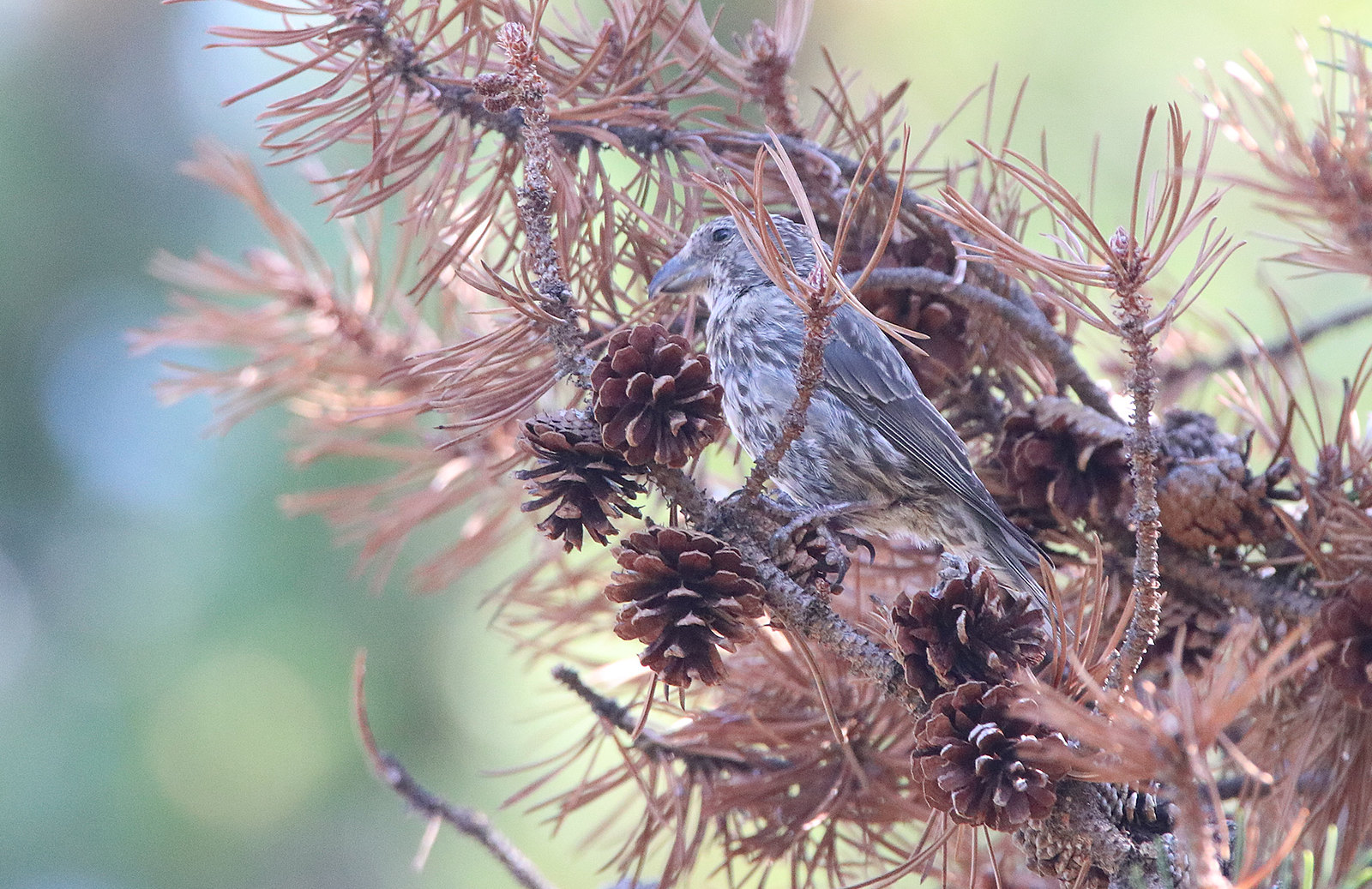 The only Cassia Crossbill seen on this tour was this drab young bird
We ended up having a few more flyovers calling, but this lone bird was the only cooperative one! We called it a day and headed into Twin Falls for the night.

Day 5 started out in the agricultural areas south of town with Burrowing Owl, Barn Owl, and Great Horned Owl. We drove around for a bit checking all my usual Gray Partridge spots without luck. Eventually, on our final loop on one road, we turned around and like a miracle spotted 3 birds along the road that we had missed driving the other direction. We headed back to town and spent some time birding along the Snake River, with the highlight being an incredibly cooperative Lazuli Bunting. 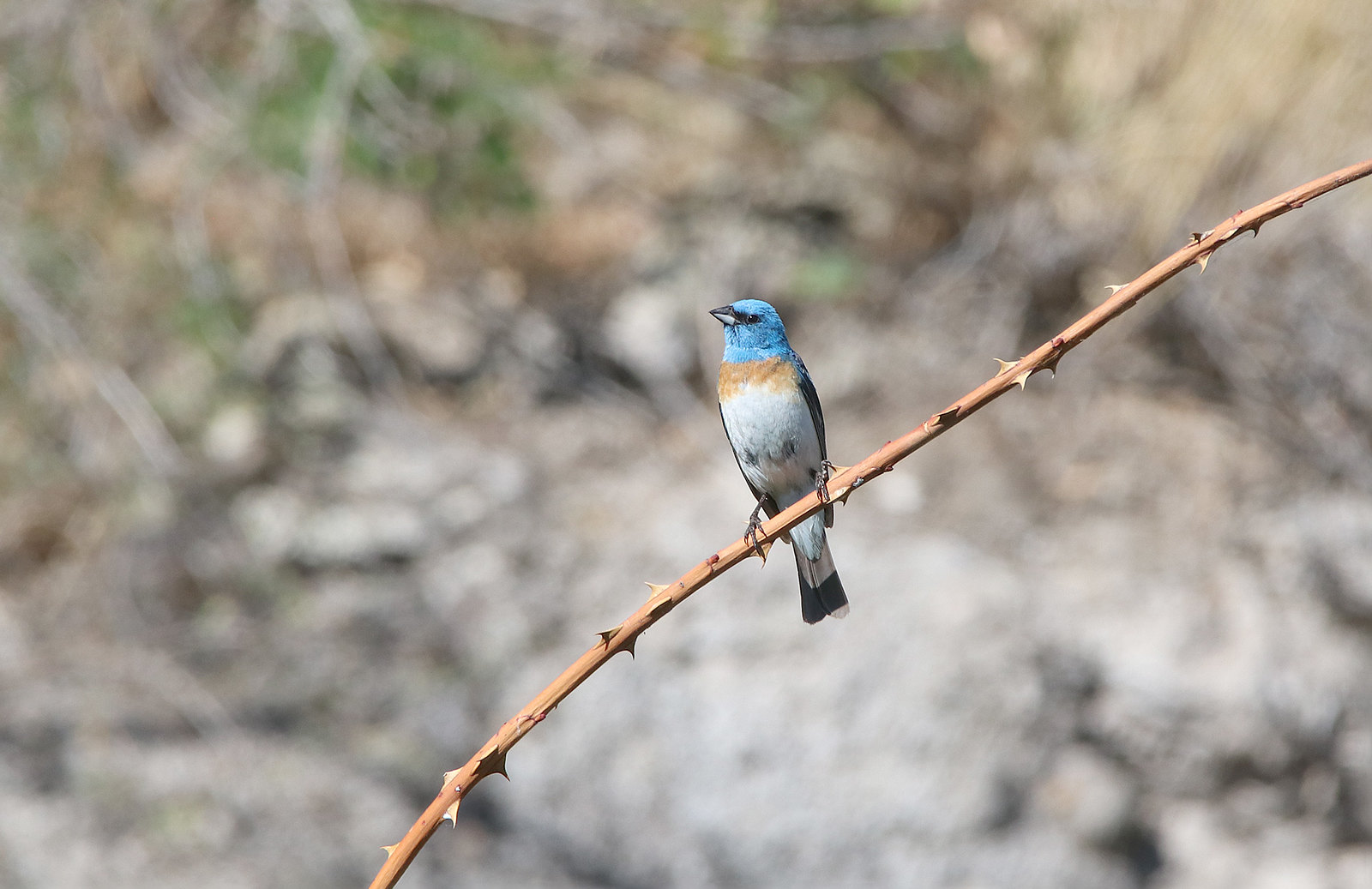 Lazuli Bunting bringing some color to the party
With our Idaho needs met, we started heading back towards Utah, and made our way to Bear River Migratory Bird Refuge. While the birds typically found here in the summer are like any other marsh in the mountain west, the concentration of breeding Western Grebes, and more importuning Clark’s Grebes makes this a must-visit if you’ve never been. Both birds showed well in good numbers. We were also treated to more than 5,000 migrant Bank Swallows in a couple of large flocks, and 3 Common Goldeneye—and out of place species not normally found here in the summer. 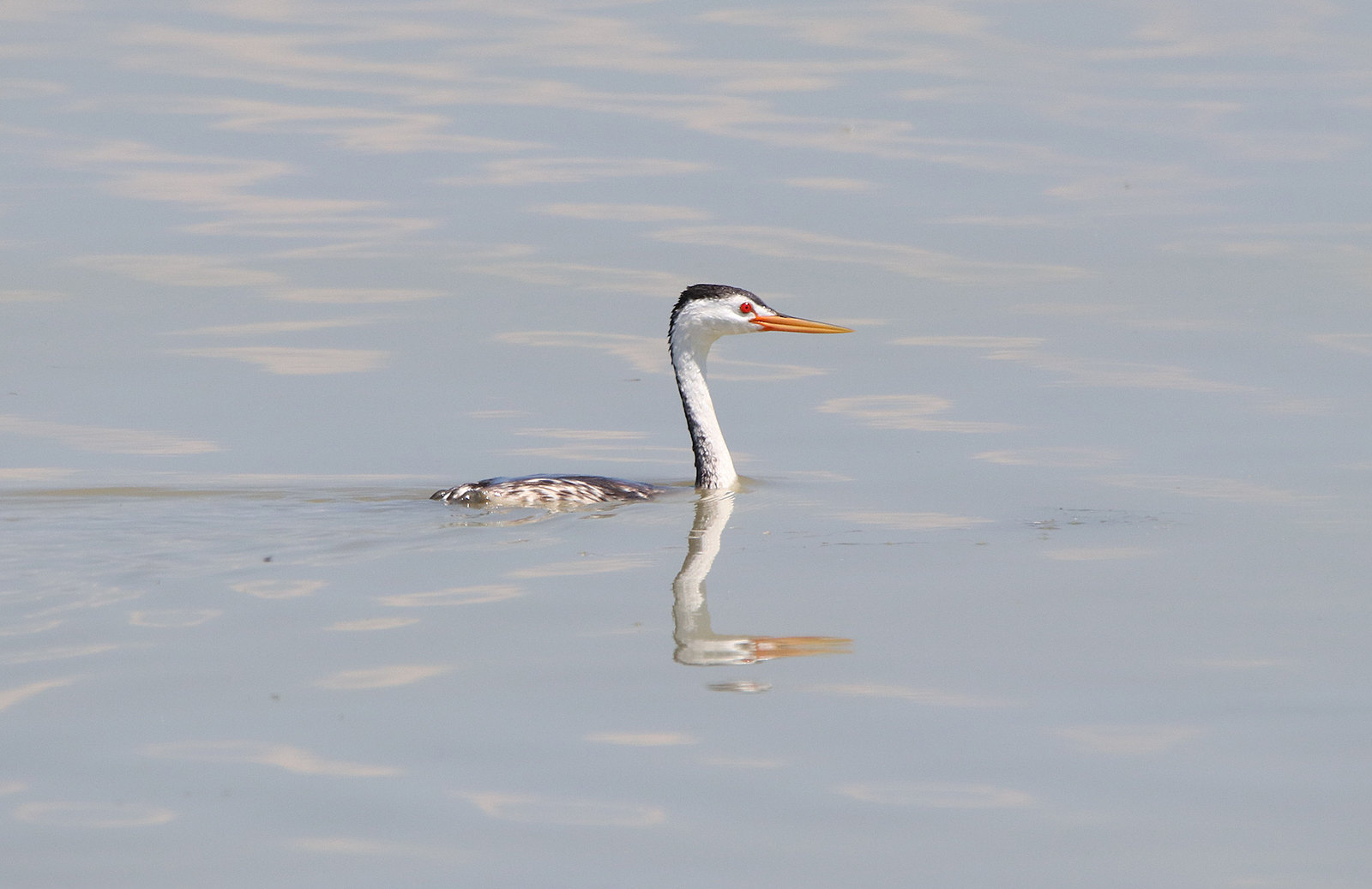 One of around a dozen Clark's Grebes seen this day
We continued birding along the Great Salt Lake seeking out Wilson’s Phalarope and Red-necked Phalarope. Numbers were down considerably from previous weeks, but we did have some very close and cooperative Wilson’s for great photo ops. We wrapped up our day returning to SLC and calling it a night. 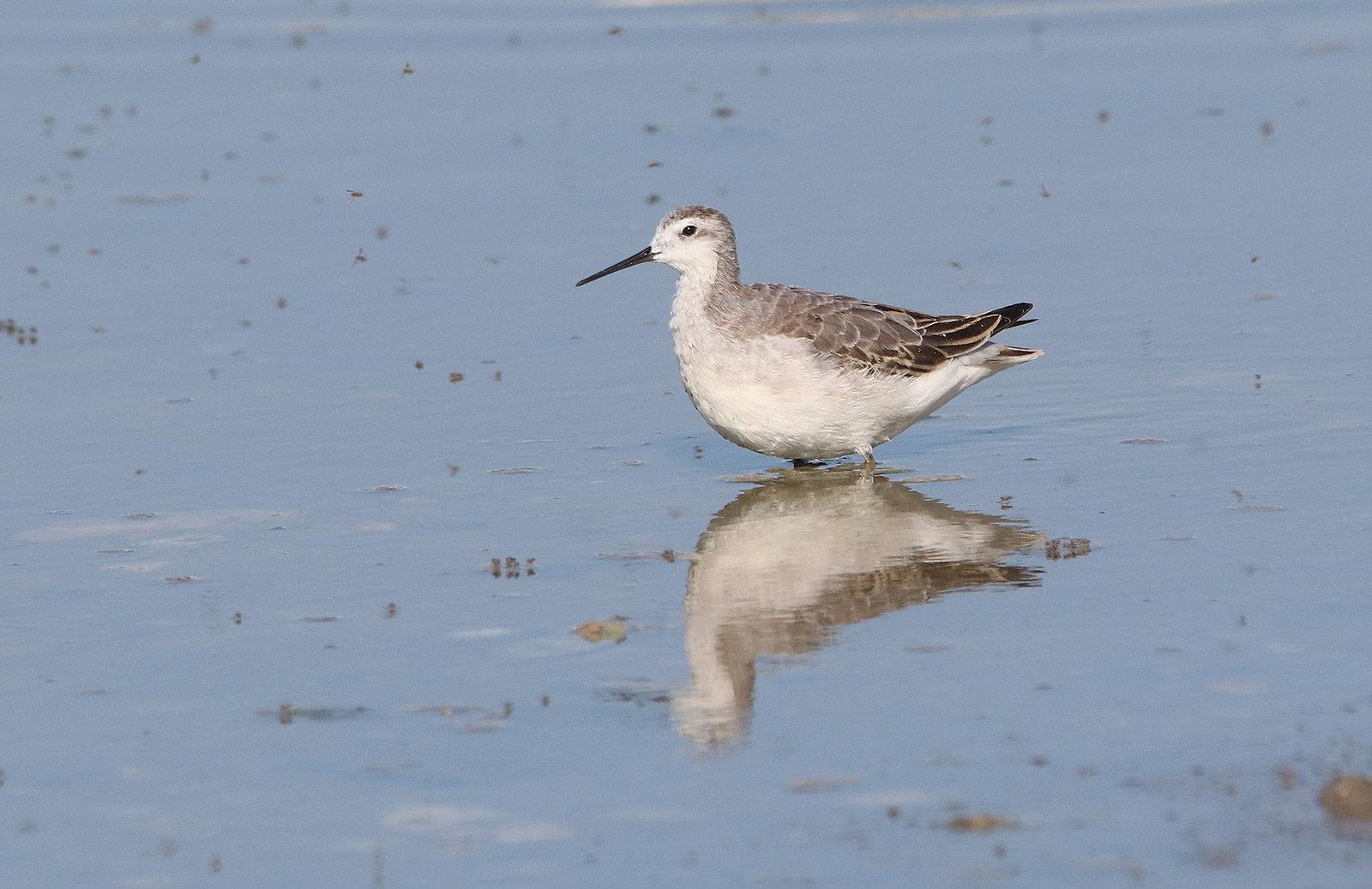 Wilson's Phalarope striking a pose
Adding an additional day to the tour we returned to the Great Salt Lake first thing in the morning and subsequently located 10 Chukar. This has been a common theme the past couple of years since a big winter kill-off 2 years ago. Birds have been reliable at first light in a couple spots, but with much fewer numbers than in the past, the mid-day finds are becoming increasingly harder. 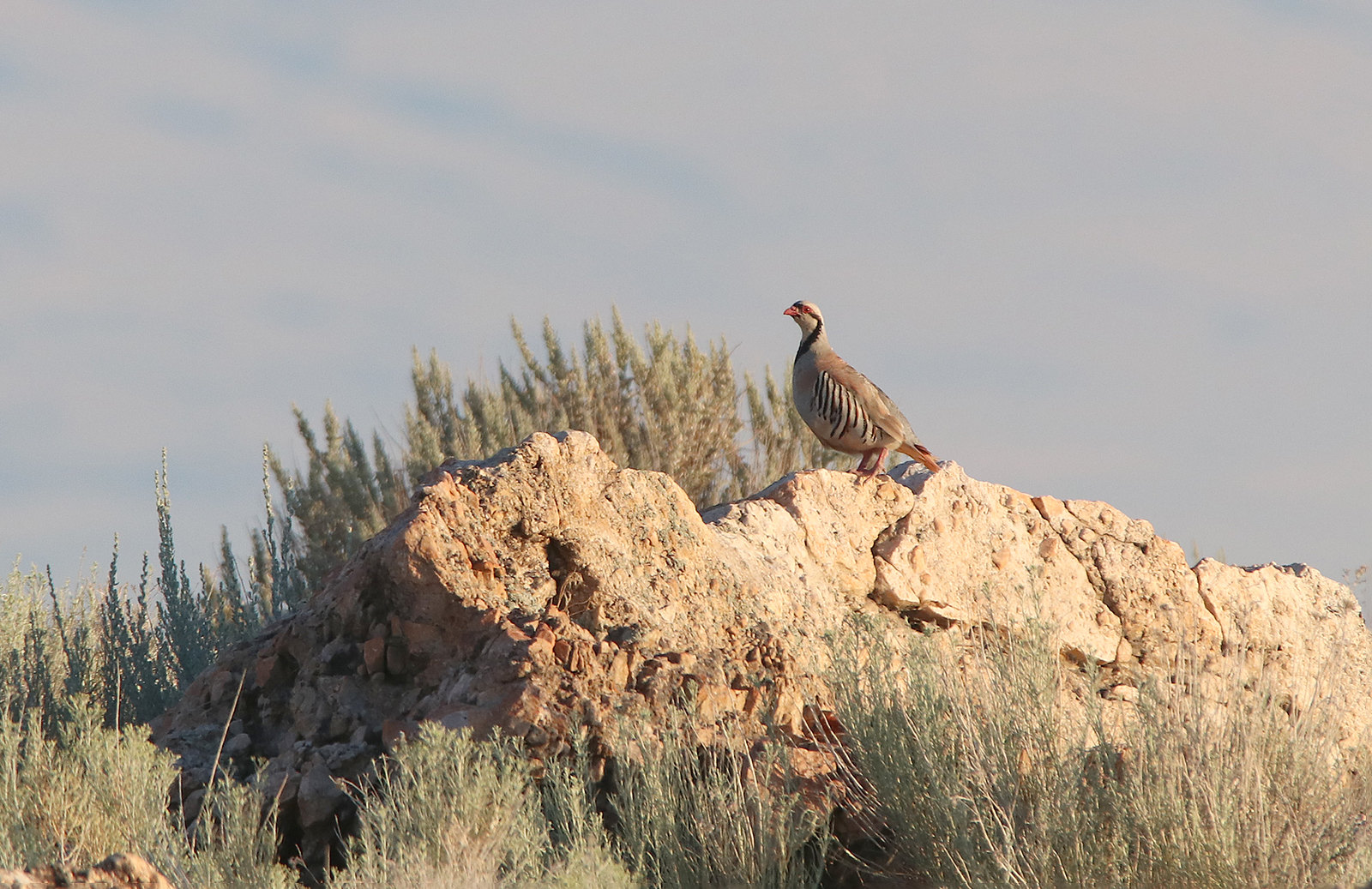 Chukar success at first light
We spent the remainder of the day birding around Salt Lake County adding a few Utah species to my client's list, and picking up Olive-sided Flycatcher for the tour. In the evening we did a little list padding picking up a couple species we hadn’t seen yet before heading to a nearby canyon at dusk to pick up Western Screech-Owl, which did not disappoint. We located 6 screech-owls before turning in. 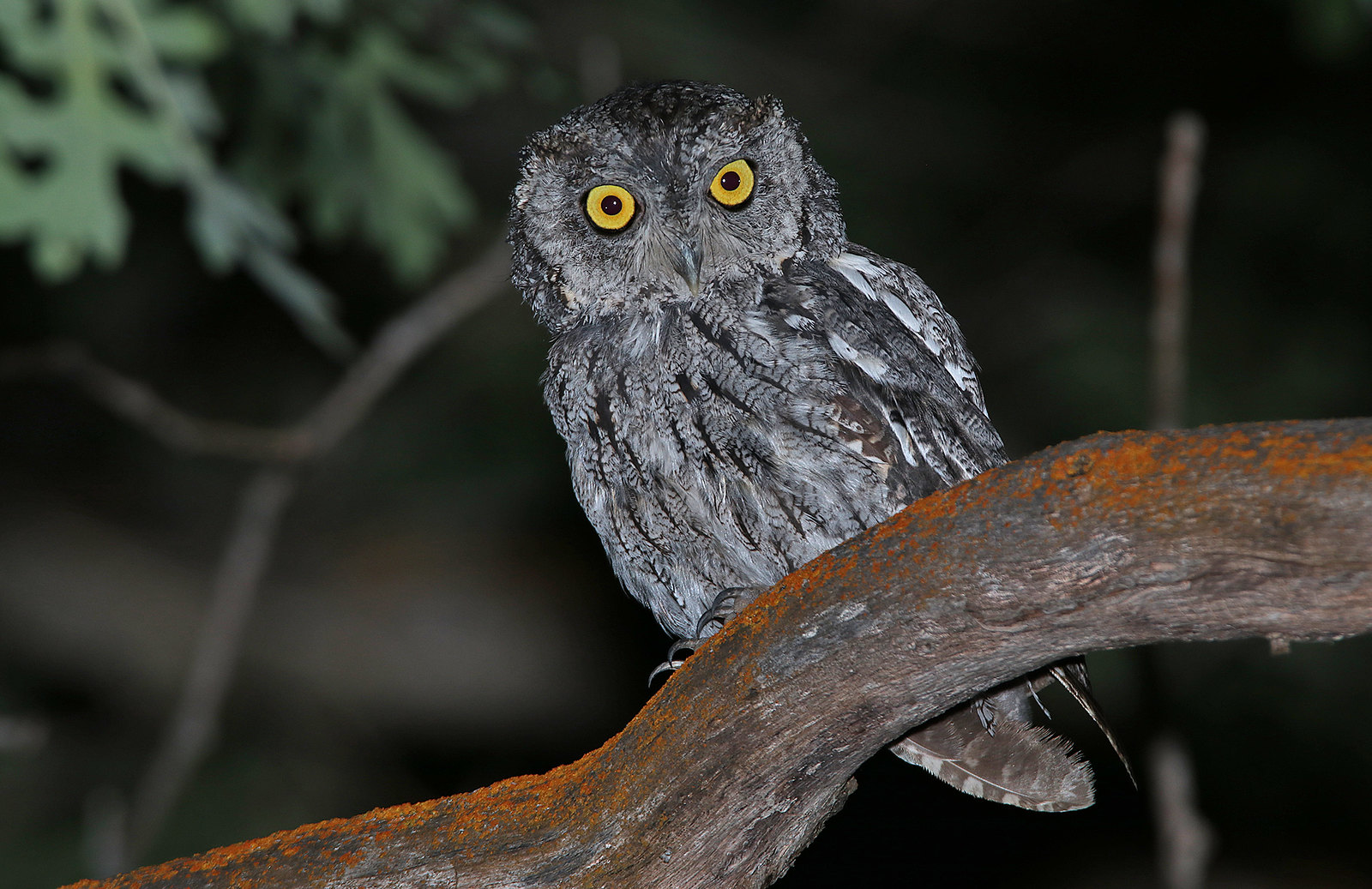 Our last night of owling produced numerous Western Screech-Owls
The final extended day of the tour took us on a loop through the northern Utah Mountains and southwest Wyoming desert. Visiting a mountain valley at sunrise we had incredible looks at beautifully lit Sandhill Cranes. More than a dozen cranes in golden light was definitely a tour highlight. 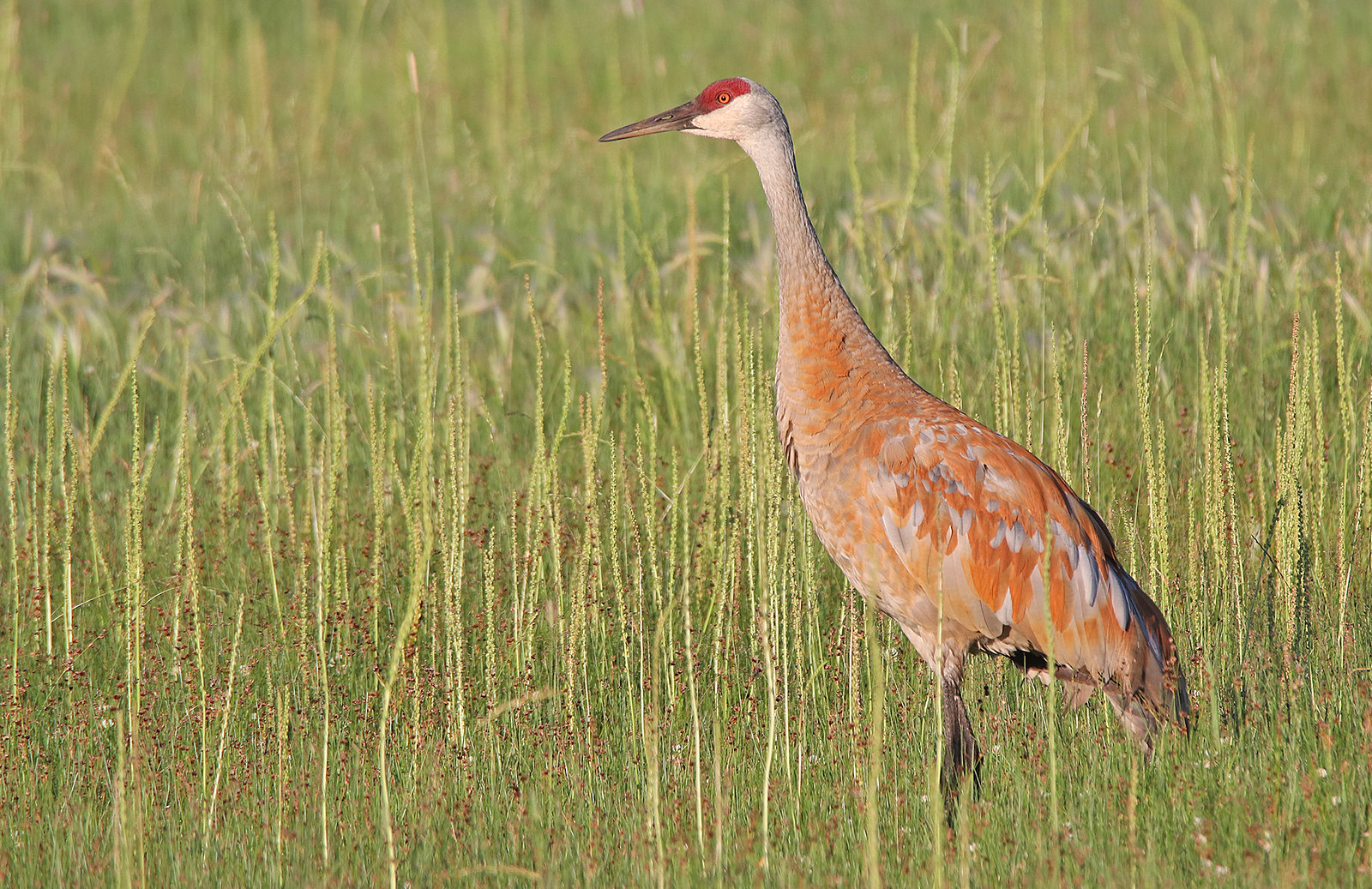 One very well lit Sandhill Crane
However, the bird that really left me feeling good was the incredible number of Bobolink we found. We counted no fewer than 32 mostly young birds with a few adult males and females during the morning. Again, the lighting made for insane photo ops! 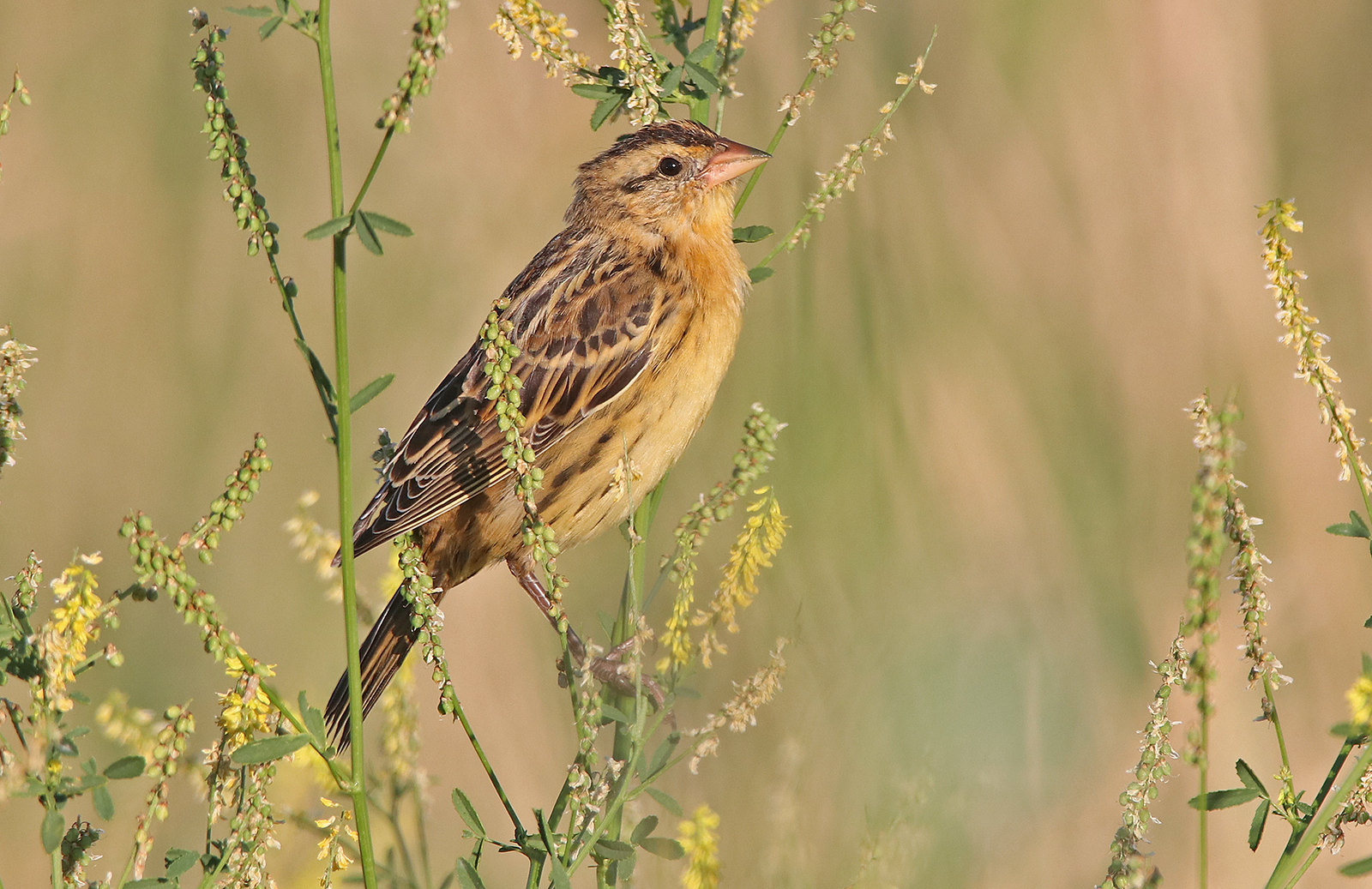 We don't normally get Bobolink on this tour, but with a 2-day extension we tracked down a few ;)
The rest of the morning filled in a few trip needs like our 5th empidonax flycatcher of the tour—Willow Flycatcher, and more chances for photos of American Dipper. Finding our way into southwest Wyoming where it was extremely hot despite the 2,000' elevation difference from Salt Lake City we had some good birding at a local reservoir. We found a few more Sagebrush Sparrows, making it a 3-state species for the tour, and a surprise Common Loon that was clearly lost.

And just like that this most wanted tour + extension was a wrap.
With 164 species it was our biggest total for this tour—although the 2 extra days definitely contributed to the bigger tally. All in all things went exceedingly well and we hit every target species for the tour!