The trip got off to a rocky start when 3/5 of our group was stranded in Houston after our flight to San Antonio was delayed 90 minutes. Our already late 10:30 PM arrival was now pushed back until after midnight, meaning it was going to be a long night... Eventually, we did arrive in San Antonio and met up with the rest of our group, got our bags, and picked up our Mini-Van. A quick stop to try for Barred Owl at a local park didn't turn up any owls, but did provide our first NORTHERN MOCKINGBIRD of the trip, as well as several calling BLACK-CROWNED NIGHT-HERON. We made a quick pass by The Alamo--I wanted to see it--and made a supply run before jumping on the highway and leaving the city behind. It was nearly 2:00 AM...

The drive seemed like it took forever. I got a look at a BARN OWL cruising across the otherwise barren road. Cars were far and few between--as were towns, and people. About 45 minutes out from Salineño the air pressure gauge lit up. Aw shit... Kenny and I checked the tires and everything looked alright. The light was still on but did shut off about 15 minutes later. We didn't end up having any tire problems the rest of the trip so I guess we got lucky! We rolled into the dusty town on the edge of the Rio Grande around 5:30 AM. and passed a border patrol vehicle idling in an alley. Down the dirt road, we bounced, seeing the mighty river for the first time, and parking. I was relieved--we were finally there and about to start birding. 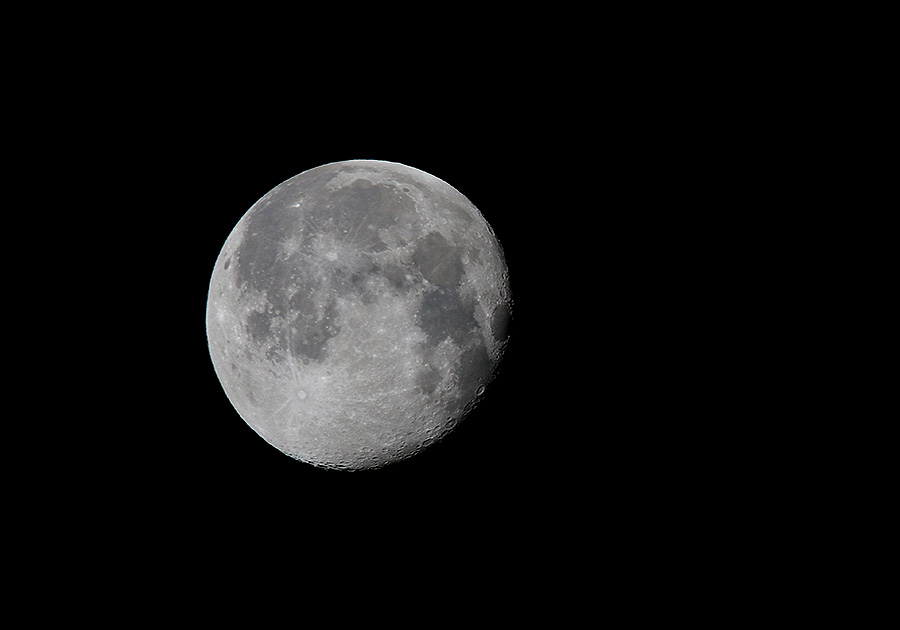 Full Moon over the Rio Grande

Outside, COMMON PAURAQUE called from various locations around us, while chirping crickets filled the warm air. The mosquitoes were horrendous. Out came the deet, and while we prepared for the day, here came the border patrol lighting our group up as it approached. The agent was a nice younger guy named Eli, he just wanted to let us know that if we saw anything, or needed help he was right up the road. Sure enough, he was in the same place a few hours later when we rolled out. 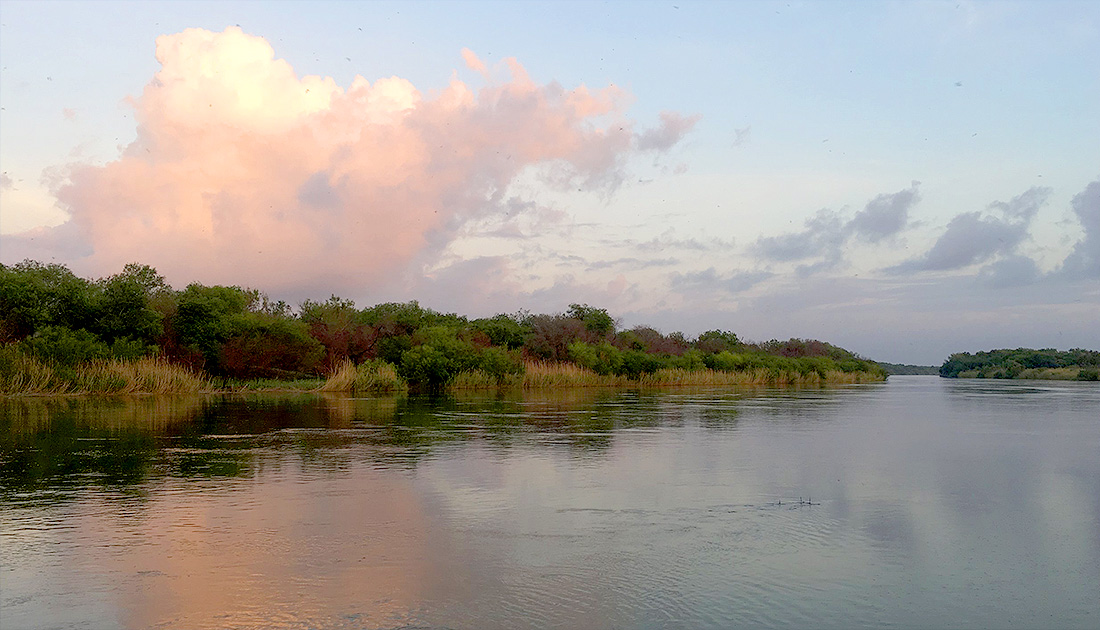 Sunrise over the Rio Grande

In the meantime, our group set off to look for birds. COUCH'S KINGBIRD, GREAT-TAILED GRACKLE, and NORTHERN CARDINAL all could be heard while the nearly full moon lit up the river bordering our southern view. I set out to find a pauraque on the ground and eventually got lucky. I thought my camera had malfunctioned only to realize at the end of the day that I caught a shot of the bird before it had flown off! 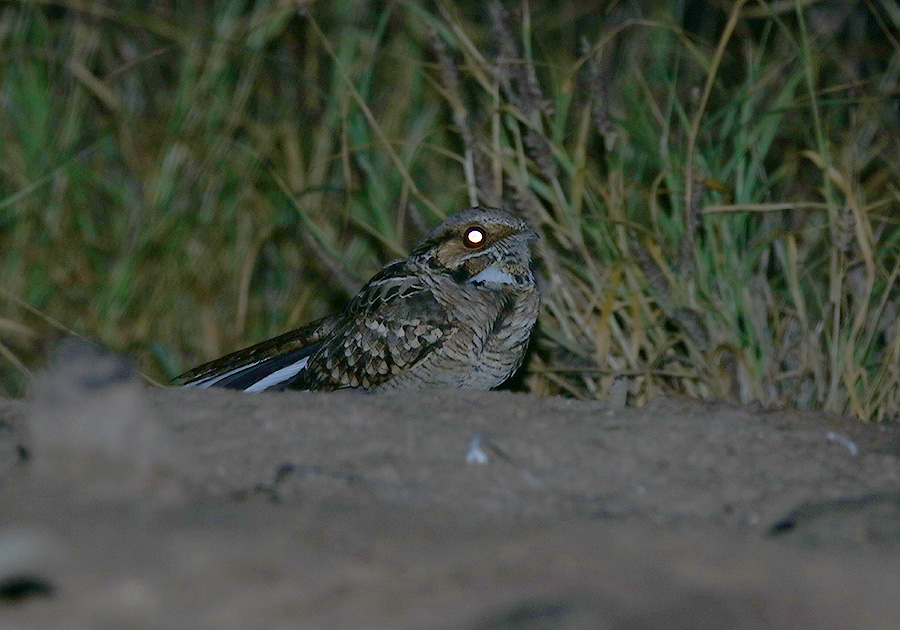 Common Pauraque along the the trail at the river

As the light slowly crept up to the east the environment around us began to come to life. The dawn chorus filled the air, and I could now make out our surroundings much better. We started rattling off new birds left and right. There were no shortage of OLIVE SPARROW, and BLACK-CRESTED TITMOUSE. Overhead MOTTLED DUCK started passing down river. GULL-BILLED TERN, SNOWY EGRET, and OSPREY were all seen in quick succession. Life birds were few and far between as I had seen most of these species south of the border--but the titmouse and sparrow were both new. 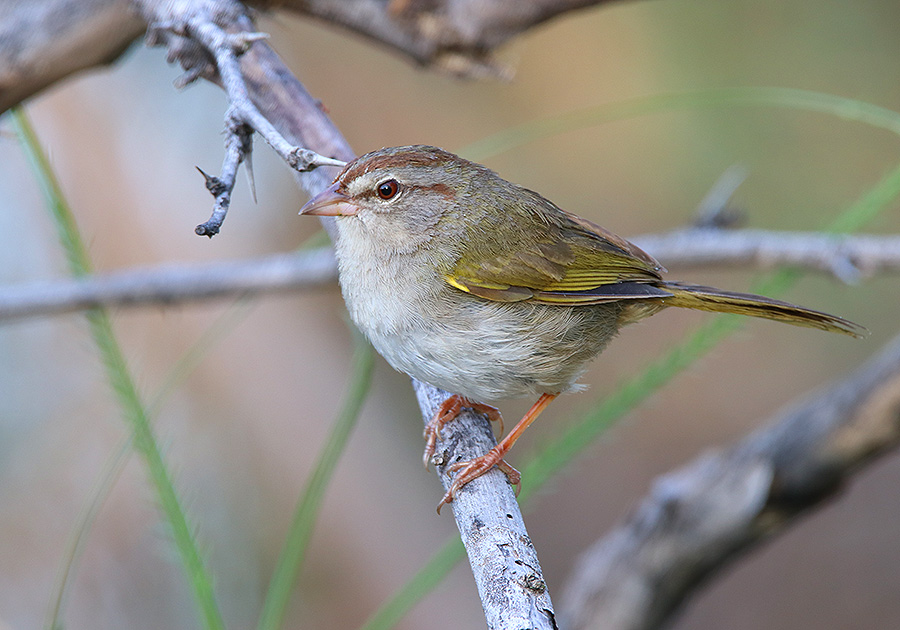 One of the many Olive Sparrows we heard and saw

After a couple of hours we’d tallied 50 species, and I added more than 30 to my Texas life list. The best bird was a WHITE-COLLARED SEEDEATER which has become fairly regular here but is heard more often than seen. We left the river behind and took the Salineño Dump Road towards Starr County Park. Along the road, there were several PYRRHULOXIA--although none were cooperative for photos. WHITE-TAILED HAWK and GRAY HAWK were both new trip birds, and the dry desert habitat along the road was a stark contrast to the lush habitat along the river

At Starr County Park we set out on foot to see if we could track down the RED-BILLED PIGEON which were getting harder to find as spring progressed. A few familiar southwest species greeted us including BULLOCK’S ORIOLE, VERMILION FLYCATCHER, and CACTUS WREN. Eventually, I heard yelling and pointing at three birds cruising overhead--it was the pigeons! We watched hoping they would circle back, but instead they flew off to the northwest until they disappeared out of sight. 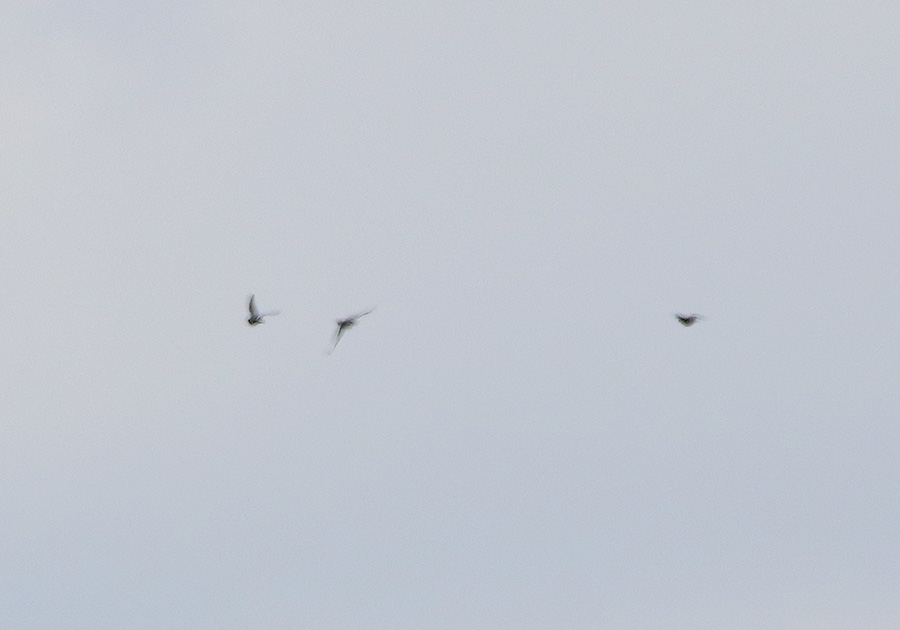 It was just after 10:00 AM when we headed southeast following the river into the Lower Rio Grande Valley--most of us had been up more than 24 hours at this point. The excitement of new birds kept everyone on edge and while they were far and few between during the 90-minute drive to Bentsen, just being in south Texas kept us wide awake. The Bentsen Rio Grande Valley State Park has long been recognized as a top birding destination in the states. I didn’t quite know what to expect but was surprised at how dense the habitat was. 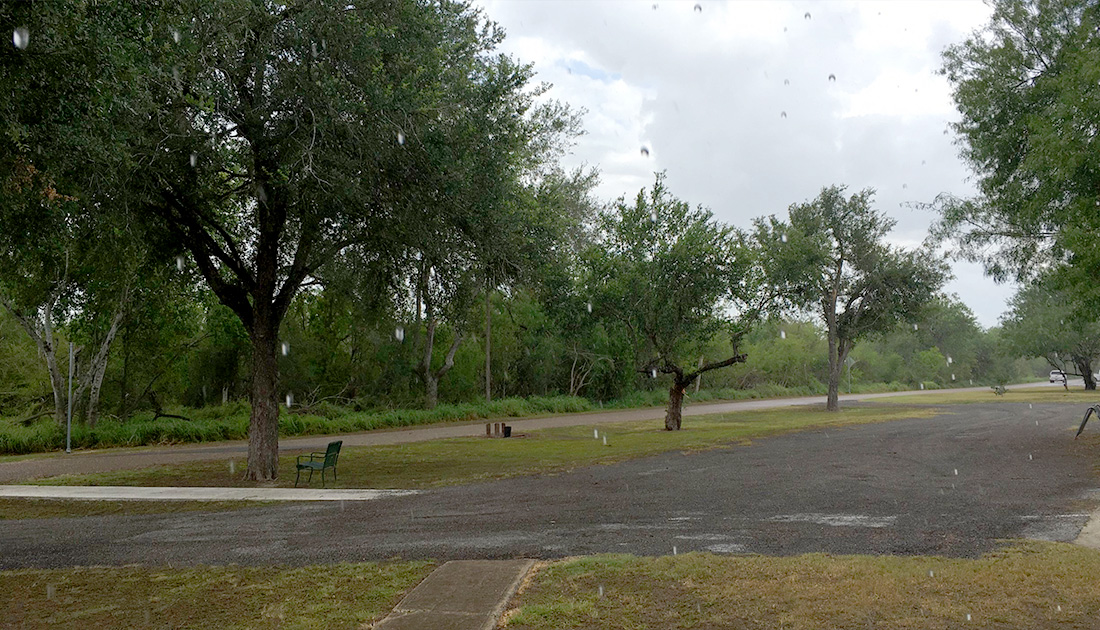 Bentsen State Park in the Rain

I had this vision of a wide open campground, with a few patches of trees--but this was not the case. The actual state park is closed to vehicles--foot traffic, park tram, and bicycles only. The campsites were all walk in, and the place reminded me more of the Yucatan Peninsula than what I expected of south Texas. 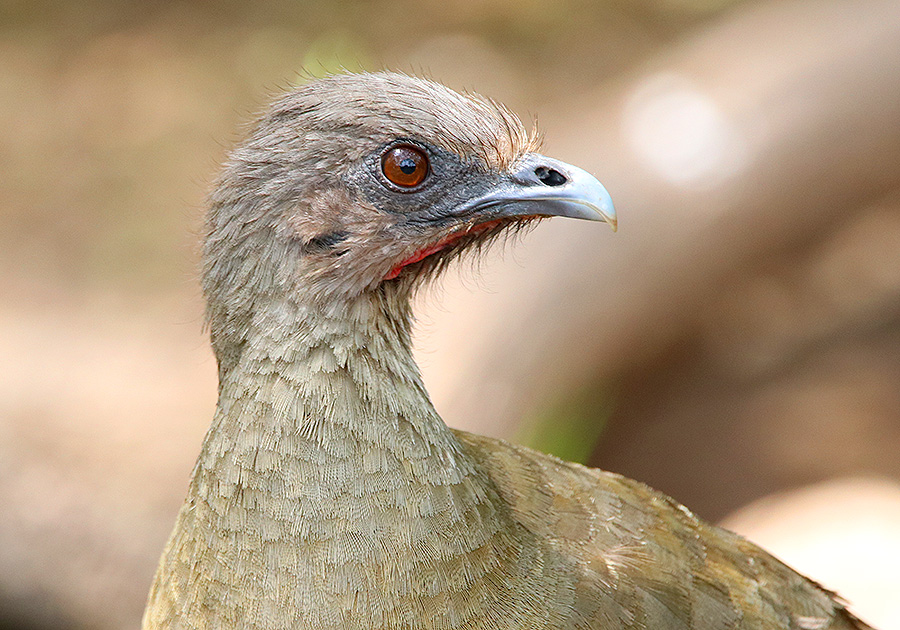 Plain Chachalaca at the feeding station

We walked into the park as the clouds descended on the area. In a matter of 20 minutes, it went from sunny to a downpour. But not before we saw some great birds. The PLAIN CHACHALACA at the entrance feeders were overly cooperative, and several GREEN JAY provided amazing looks. 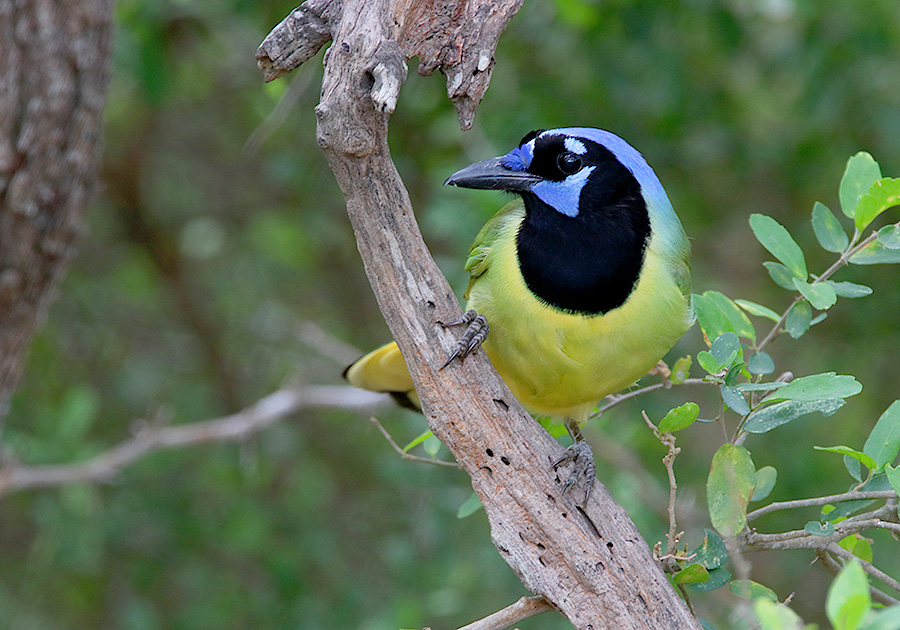 As we made our way to the Kingfisher Overlook are we found several ALTAMIRA ORIOLE. This was one of my top wants for the trip (ABA area) and I spent about 15 minutes following a pair through the trees trying to get a nice shot--despite the poor lighting.

This Altamira Oriole was certainly a highlight of the day

Over the next 2 hours we slogged through the rain--ducking into the cover of picnic sites, and trees when the deluge was over the top. By the time we got back to the car with less than 10 new trip birds everyone was thoroughly soaked, and hungry.

Waiting out the rain under some trees

It was time for some food and I had tracked down the best taco joint in McAllen. We headed to Taco Palenque where we expected short lines by mid-afternoon--we were wrong--the place was slammed, which was a good sign for how tasty the food would be. We feasted!

After fueling up on delicious Mexican food we had a packed afternoon of birding planned that would loop us down to the border, over to Santa Ana NWR, and back to Bentsen for owling at sunset. We had one stop in Hidalgo, in a residential neighborhood which has become a regular hangout for MONK PARAKEET. It only took a couple minutes to track down the birds and we were once again on our way. 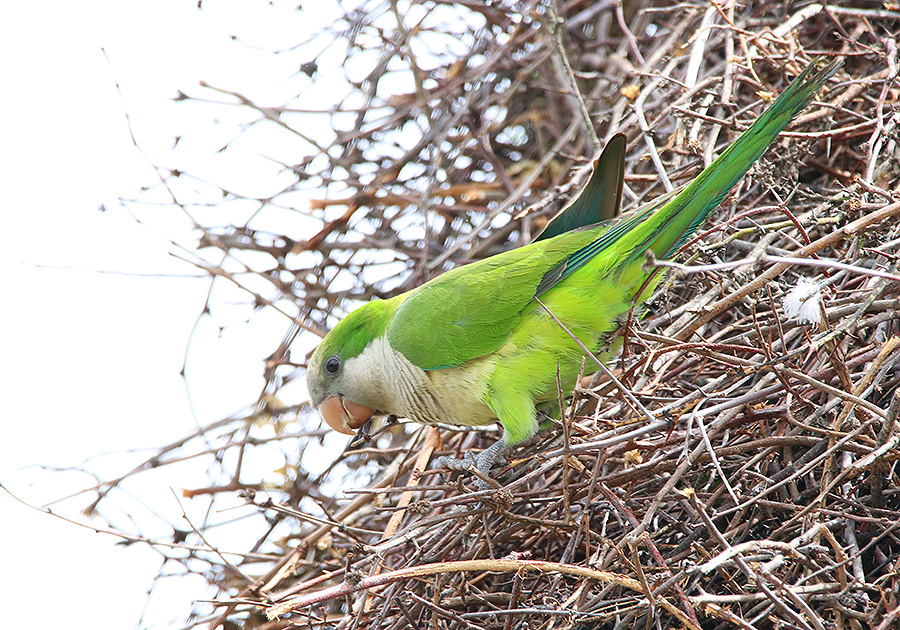 One of the Monk Parakeets we saw in Hidalgo

By the time we arrived at Santa Ana at 4 PM it was hot outside and the birds were mostly quiet. I’m used to things slowing down in the heat of the day, and that was no exception here. I had an expectation of birding being more like the tropics with activity continuing throughout the day in the forest as long as you could find food sources. After a quick trip to the hawk tower where a GRAY HAWK put on a nice show, our group split. I headed back to the visitor center to see if I could photograph BUFF-BELLIED HUMMINGBIRD, while the rest of the group headed out to the ponds to see what shorebirds were around. They had a productive hike, and added 29 species to the 31 we had in the forest.

Buff-bellied Hummingbird near the visitor center

We turned the car around and headed back to Bentsen--we wanted to be there about 30 minutes before sunset to see if we could catch the Elf Owls emerging from their cavity. We parked right as the sun was starting light up the sky in orange--and just in time to watch 125 MISSISSIPPI KITES coming into the trees to roost for the night. It was incredible watching a flock of kites swirl over the trees then descend as the sun disappeared to the west.

Mississippi Kites coming in to roost for the night

We headed to the nest cavity where there was a small crowd gathered in waiting. We joined them and waited as well. Pretty soon the expected emergence time came--then passed, with no owls. So we waited. 5 minutes, 10 minutes, 15 minutes, 20 minutes. I was beginning to think something was up, when a face peered out of the nest. Pretty soon the owl flew out and landed on the telephone wire--and then another--both of the pair of ELF OWLS were giving the group great, albeit low light looks. The photos were garbage, but the experience was fun.

One of the Elf Owls after emerging from the cavity

We decided to head into the park and see if we could track any other night birds down. Playback is prohibited in the park so imitations would have to suffice--not that finding singing night birds was all that difficult. Pretty soon we could hear more Elf Owls calling from various places. We made our way to a thicket near a building where one seemed to be calling at almost eye-level in the trees. After a few minutes of searching I found him--and he was so close I couldn’t even take a picture--I backed up, and managed a frame-filling shot of our smallest owl! 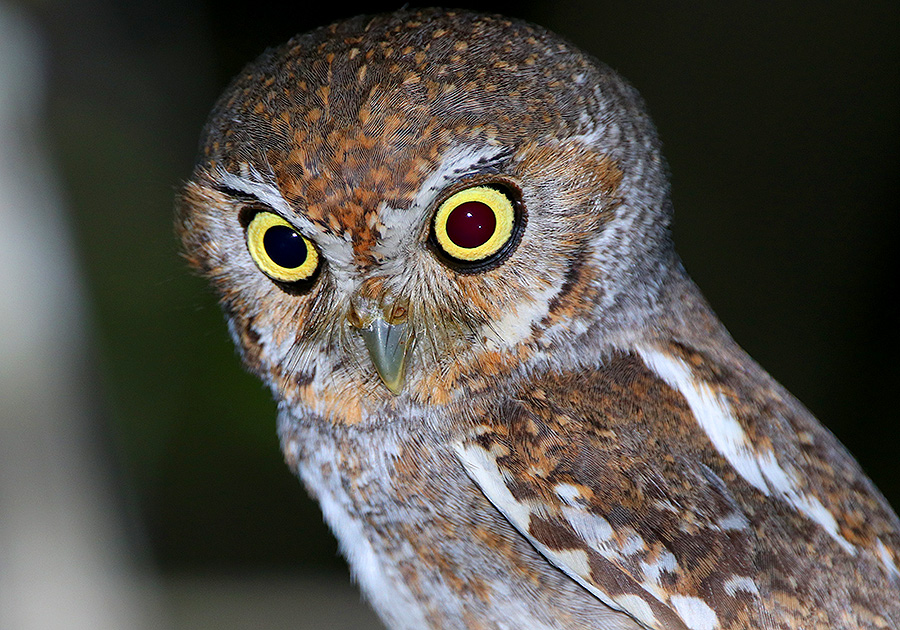 Thrilled with the success we set out to track down an EASTERN SCREECH-OWL. Pretty soon we had a bead on one singing down a side road, so we followed. It wasn’t long before we locked in on the huge tree it was in--but finding the tiny owl took a bit of work. Finally we spotted the bird deep in the tree, visible from one angle through a small opening. Just enough to catch a photo before it flew off. 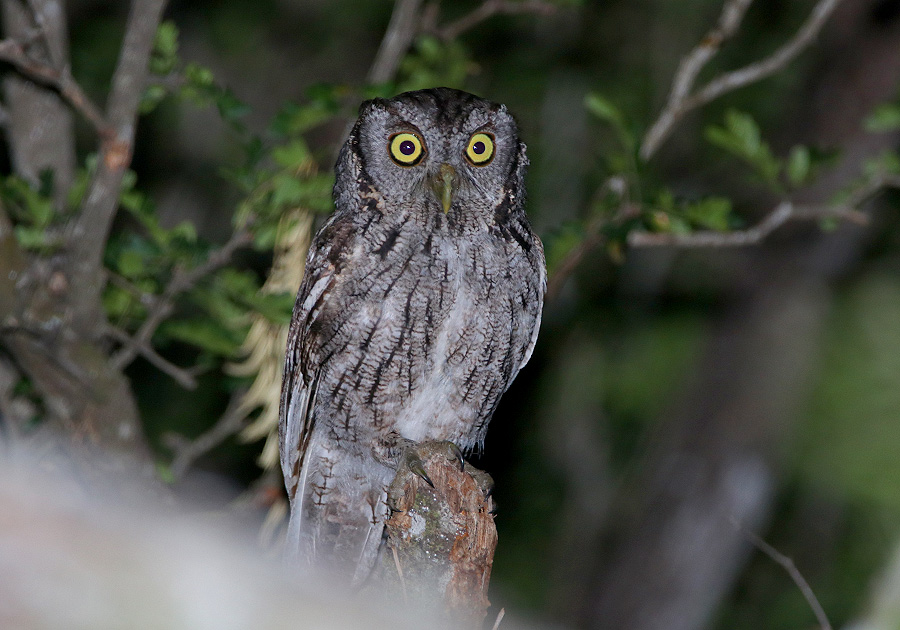 An interesting side note is that the subspecies found in south Texas--the McCall’s Screech-Owl has a distinctly different song than any other northern race of this owl. It also looks more like a Western Screech-Owl (in my opinion) than any typical Eastern Screech. I wouldn’t be surprised if this one gets split at some point in the future…

After owling, we headed to our hotel, everyone running on empty.  After nearly 40 hours without sleep the adrenaline had worn off and I was in need of a good nights sleep.  I'm not sure how many species we tallied on the first day, but it had to have been around 100.  I know that I added 66 species to my Texas Life List, and a whopping 20 to my ABA list. It was the best day of birding in the states that I had had in terms of lifers--ever.

Other Posts in this series: